REIMAGINING THAILAND WITH A BCG ECONOMY

Faced with the challenges posed by uncertainty in the world economy, technology disruption and impacts from the global pandemic, the Thai government is focusing its efforts on enhancing the country’s technology capacity to develop targeted industrial sectors under the Bio-Circular-Green (BCG) Economy model.

Under a framework that will be effective from 2021-2026, the Thai government will sharpen the country’s capacity in science, technology and innovation to boost competitiveness of players across farm & food, healthcare & pharmaceuticals, bioenergy & biomaterials, and tourism & creative economy sectors.

Essentially, the BCG economic model aims to drive the country’s economic growth from within by achieving the United Nations’ Sustainable Development Goals1, while maintaining competitiveness in the global economy and catching up with increasing global attention to circular and green economy principles. In turning waste to use, regenerating natural systems, shifting toward more environmental products, and investing in energy efficiency and renewable energy, the Thai government expects the circular and green economy to create new investment opportunities among small and medium-sized enterprises and communities.

With improved human resource capacity and competitive access to raw materials, Thailand has continued to attract solid investment in the bio-based businesses, particularly in functional food, medical & healthcare, and biochemicals. In the first quarter of 2021, the Board of Investment approved promotional incentives for five new projects in the field of advanced biotechnology with a combined investment value of approximately US$78 million in total2.

Among these projects were the manufacture of amino acids as raw materials to be used in pharmaceuticals, and of human milk oligosaccharide (HMO), a prebiotic which is a raw material used in milk powder for infants and adults. In addition, a company founded by local medical doctors developed and produced an innovative treatment for patients with acute lymphoblastic leukaemia (ALL) with (CAR) T Cell advanced therapy medicinal products (ATMP).

Another company received BOI incentives for the production of PHA (Polyhydroxyalkanoate) bioplastic and its compound developed from organic waste. The company will use PHA bioplastic to make a wide range of packaging products for food and medical supplies.

Thailand’s investment in R&D for biological products has also increased in the wake of the rising threat of pandemics and rare diseases. Also, known as biologics, these products are developed from living cells such as bacteria or plant and animal cells as an innovative approach to the treatment of many diseases. Data from the Thai Food and Drug Administration (FDA) has shown that the country’s spending on biologics increased substantially from US$0.5 billion in 2009 to US$1.7 billion in 2018, with most of the extra spending attributed to imports.

The BCG economy aims to reduce the import value of pharmaceuticals and vaccines through intensive capacity building of technology and human capital in R&D as well as clinical research and product registration of pharmaceuticals and medical devices. With an objective to develop preventive and targeted healthcare, Thailand’s BCG policy will also include facilitating use of genetic data and clinical research among researchers and industry.

To drive R&D, innovation and commercialisation in the medical and healthcare sectors, Thailand Center of Excellence for Life Sciences (TCELS) recently teamed up with the private sector for the development and manufacture of herbal and conventional medicines derived from cannabis and hemp extracts.

A key prong of the strategies to drive the BCG economy is to enhance the productivity of the farm sector and improve the economic value of farm products which will benefit the majority of the Thai population and cater to the global trend of growing health and environmental consciousness.

Under the BCG economy model, development of the local farm sector calls for more intensive use of digital technology such as agritech and upgrading of standards and value of the country’s major farm produce such as rice, sugarcane, rubber, tapioca, palm, maize, fruits and vegetables, shrimp and dairy cattle, as well as promoting goods that generate higher value such as herbs, fancy fish and alternative protein.

Thailand is capturing opportunities from the growing demand for plant-based meat and protein from insects especially crickets, as global consumers are becoming more aware of the huge carbon footprints from livestock grown for meat and dairy products.

Although alternative protein is still a fledgling industry in Thailand, growing demand should create a boon for farmers who grow plants that are rich in amino acids, such as soybean and grains. The National Science and Technology Development Agency is extensively promoting modern insect farming and processed proteins from them.

The Thai government is also increasing its support to innovators of novel foods for groups such as patients and the elderly, as well as functional food. With these measures, the government targets the food industry contributing 5% of GDP or US$28 billion in 2024, up from 4% or US$20 billion in 2019.

To promote Thailand’s transition towards a low-carbon economy, the latest national Power Development Plan targets the country’s renewable energy at 30% of total energy production, or 17 Gigawatts, by 2037, doubling from 15% at present. The projection reflects the government’s policy to facilitate rooftop solar, the private sector’s large-scale renewable energy projects and waste-to-energy and biomass in local communities under the “Energy for All’ scheme.

As a leading global supplier of sugarcane and cassava, Thailand is also attracting investment for biodiesel and bioethanol as well as biochemicals, especially at the Eastern Economic Corridor3, the country’s pilot high-technology special economic zone which offers cutting-edge R&D complexes and facilities. For energy and biochemicals, the BCG model aims to promote ethanol production standards to achieve industrial and pharmaceutical grades, as well as producing ethanol fuel cells for electrical vehicles.

To promote the circular economy, the government will provide support to recycling waste such as sugar cane leaves and rice straw in each region. It will also reduce food loss and food waste and support more environmentally friendly construction and smart city development.

As tourism has long been a key driver of the Thai economy and employment, the BCG Economy looks to link tourism to targeted markets such as tourism for wellness, food culture, eco-tourism, arts, and sports.

The country also intends to drive the tourism sector towards greater sustainability through efficient tourist management, monitoring the impacts of tourism, preserving natural resources and cultural heritage. It also aims to promote less-visited cities through improvement of transportation networks and use of digital platforms. 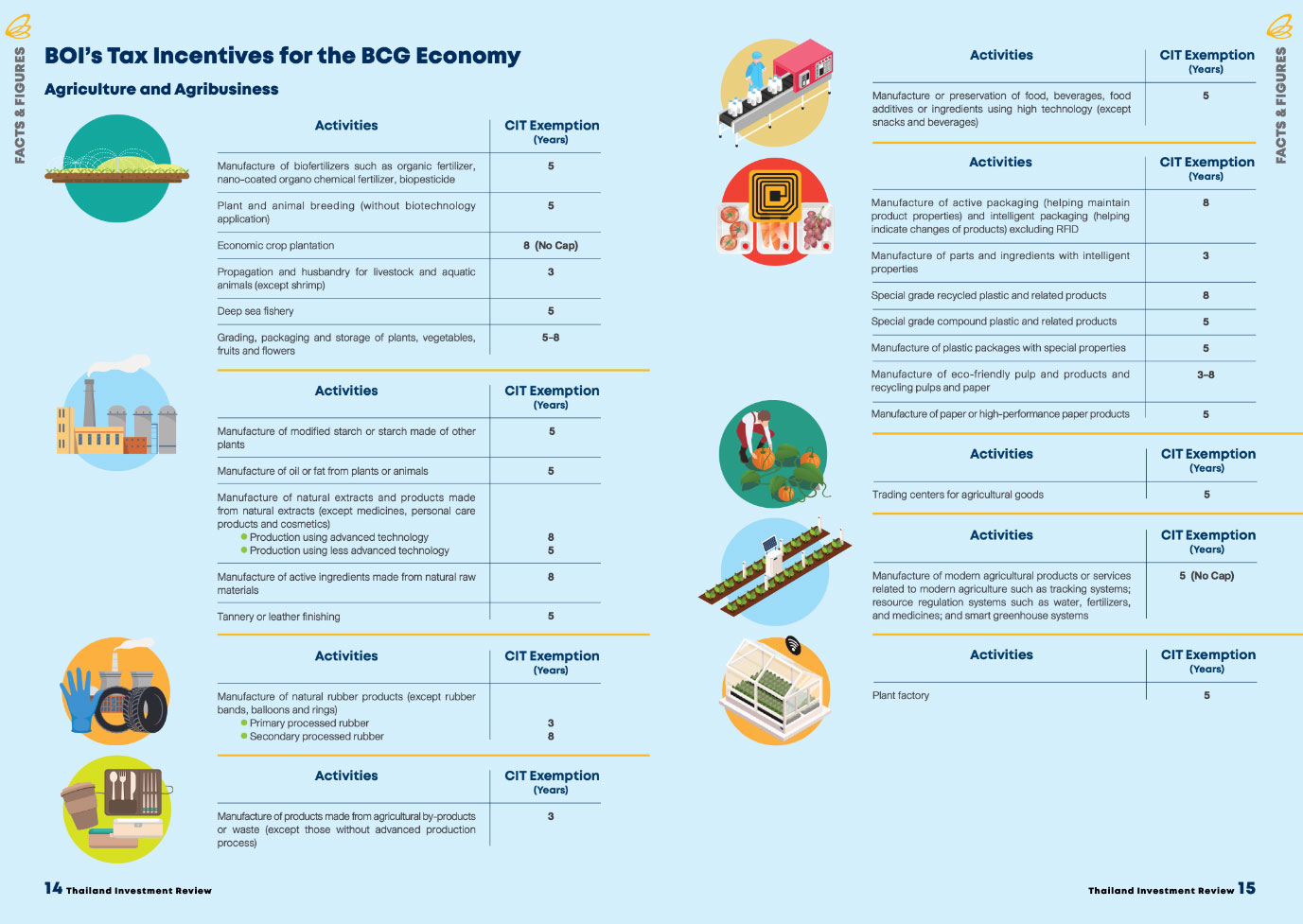 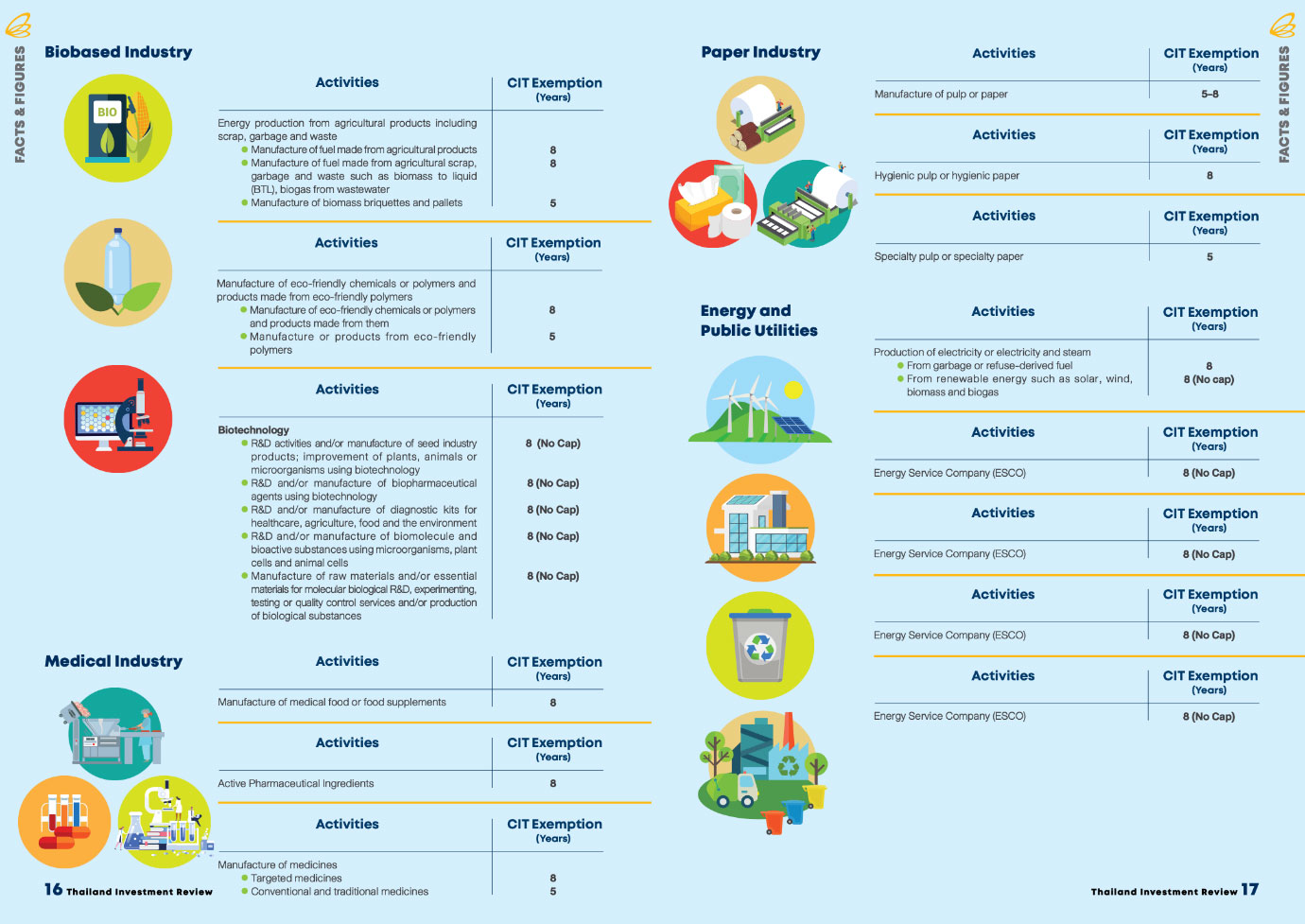