The transition to net zero carbon emissions is one of the biggest challenges facing our generation. The Paris Agreement -- intended to stave off the worst effects of climate change by keeping global warming below 2°C -- requires companies and economies to move at an unprecedented pace.

The challenge is especially evident in Asia, Africa and the Middle East which are the most vulnerable to climate change -- and most in need of funding to ensure that economic development can continue while the climate crisis is addressed.

Another reason affecting emerging markets in particular is the perceived investment risk, according to a recent study by Standard Chartered on financing the transition to a net zero world, called Zeronomics.

The Zeronomics researchers in September and October 2020 surveyed the senior leadership or management teams in 250 companies including multinationals in the US, Western Europe, the Middle East, Africa and Asia. A hundred fund managers, strategists and emerging market specialists were also included in the survey.

"Net carbon emissions must fall by 45% from 2010 levels by 2030 for the world to stay on track, but seven in 10 companies plan to defer action on climate change, raising the threat of the 2020s becoming a lost decade," said Bill Winters, chief executive of the UK-based financial group that has a significant presence in Asia.

"If businesses fail to take rapid, meaningful action to reduce emissions, we will fail to arrest the very worst effects of climate change. We must act now, and we must act together: companies, consumers, governments, regulators and the finance industry must collaborate to develop sustainable solutions, technologies and infrastructure."

In Southeast Asia, companies view increased operational efficiency and cost savings from sustainable practices as the most important factors that would accelerate their transition.

However, the biggest barrier to net zero transition faced by companies is a lack of support from their investors, with 73% of senior executives mentioning this challenge -- 13 percentage points above the global average.

Asean companies are also facing serious net zero transition delays caused by Covid-19 as 97% of senior executives say the pandemic has delayed their progress, compared to 85% globally, the reported pointed out.

In Greater China, half of the senior executives surveyed say their organisations is not transitioning to net zero fast enough; 55% believe their company will require high levels of investment to do so.

The biggest barrier faced by companies is lack of support from their leadership, cited by 72% of senior executives, while 88% of these respondents agreed that short CEO tenure that makes it hard for leaders to tackle long-term issues such as net zero transition.

Meanwhile, 57% of Indian senior executives believe their company isn't making the shift to net zero fast enough. Some 47% of respondents say their organisation supports the Paris Agreement -- consistent with the global average -- while 60% of companies say they require high levels of investment to transition.

According to the survey, standing in the way of a net zero economy is the scale of the finance needed and the challenge of raising it. As much as 85% of survey respondents say they require medium or high levels of investment to transition to net zero; the figure rises to 91% of carbon-intensive companies.

Yet more than two-thirds (67%) of senior executives say that lack of capital is a significant barrier to net zero transition. The issue is even more pressing for emerging market businesses with 73% citing a lack of capital as a significant barrier. About 82% of investors surveyed believe a support is lack for net zero transition among the investment community.

In addition, more than two-thirds (69%) of senior executives indicated that investors are reducing their exposure to carbon-intensive assets, making it harder for companies to pivot to low-carbon business models. 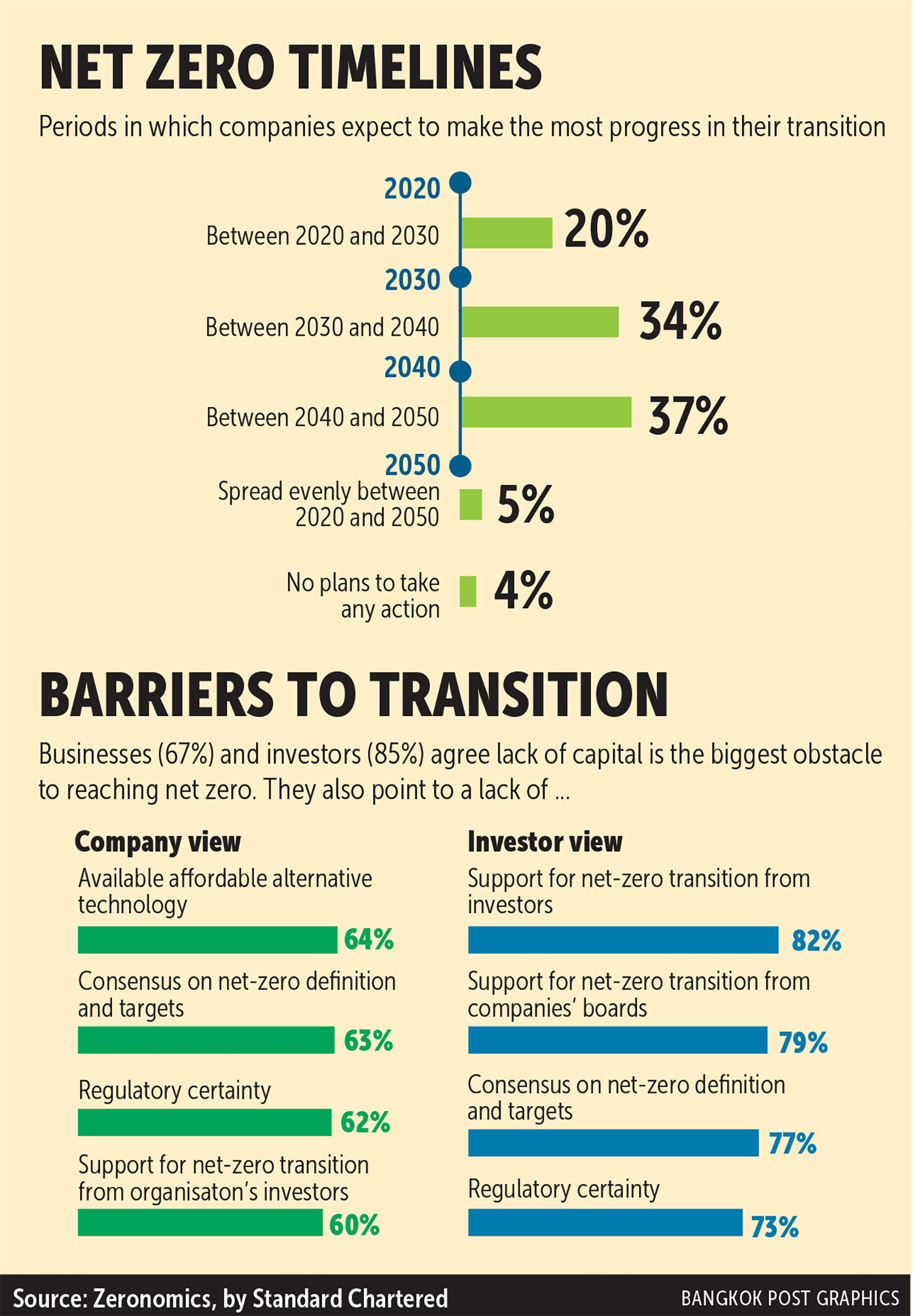 Another Standard Chartered report, The $50 Trillion Question, found that investors are increasingly considering ESG issues when making decisions, and that trillions of dollars are expected to flow into ESG funds over the next three years. This could result in divestment from carbon-intensive companies at a time when investment is needed most.

At the same time, 51% of companies state that the technology they need to make the transition does not exist yet. Until this technology is available, some emissions are almost impossible to eliminate, noted the report.

"Many of these companies are actively engaged in the net zero challenge and their involvement will be key to transitioning global infrastructure, energy supplies and consumer products. Strategic investment in these industries can help to drive a more sustainable future."

The research reveals that investors are placing more emphasis on net zero strategy in their investment decisions. Increasingly, companies must show their commitment to net zero to access capital, said the report.

About 60% of investors will not invest in a company that lacks a clear net zero transition strategy. On average, companies are investing just over 2% of annual turnover in net zero transition. However, almost all senior executives (97%) admit this will need to increase.

"Funding is not flowing to the markets at the greatest risk from climate change," said Simon Connell, Standard Chartered's global head of sustainability strategy. "We must decarbonise in a way that accounts for the communities at most risk, both from climate change and from the transformation of carbon-intensive industries."

Mr Winters said decarbonisation is a key focus for Standard Chartered with commitments to reaching net zero carbon emissions from its operations by 2030, and from financing by 2050. The bank also has had targets in place to lower energy use and report progress every year for more than a decade to date.

The bank's climate impacts are primarily from the clients it finances and supports. "We measure, manage and ultimately reduce the emissions related to our operations and the financing of our clients," the report said. By 2030, the bank will only provide financial services to clients who are less than 5% dependent on thermal coal.

"Good intentions are the first step towards sustainable change. Now is the time to translate strong words into bold action," said Mr Winters.

August exports up 8.9% y/y, below forecast