Counters of airlines is closed as lockdown and travel restrictions are imposed to curb the spread of the coronavirus disease at Don Muang airport on July 12, 2021. (Reuters photo)

Five major tourist destinations -- Chiang Mai, Chon Buri, Hua Hin, Phetchaburi and Bangkok -- were scheduled to reopen on Oct 1, but a Centre for Covid-19 Situation Administration (CCSA) subcommittee recommended the date be pushed back to Nov 1.

A decision on the new timeline is expected from the CCSA on Monday.

Last week, the reopening scheme experienced another hiccup when the Bangkok Metropolitan Administration (BMA), Tourism and Sports Ministry and Public Health Ministry could not agree on a timeline for the capital.

The BMA insisted the city should have 70% of residents given two shots for two weeks prior to unlocking the doors to foreign tourists. 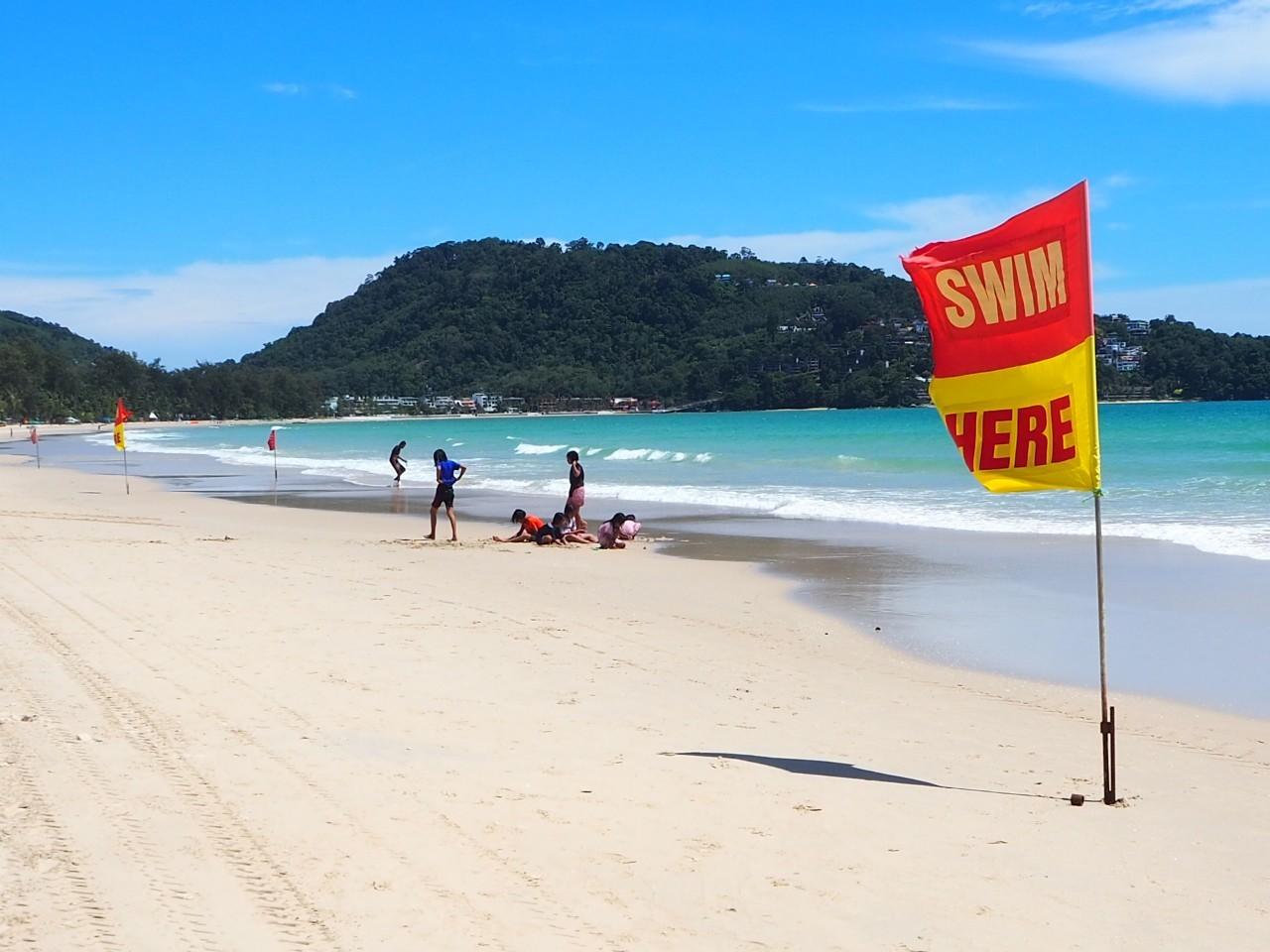 People enjoy Patong beach in Phuket, which has seen a gradual flow of both locals and foreigners because of the Phuket sandbox. Dusida Worrachaddejchai

The rift derailed the process for other destinations, as Pattaya, Chiang Mai and Phetchaburi are still chasing the 70% vaccination rate before they reopen.

Hua Hin also faces a new timeline, even though it may reach the 70% inoculation target within this month and be ready to test the waters on Oct 15.

Even if those five areas can reopen in November as planned, keeping communities safe and luring foreign tourists still face longs odds given the weak protection systems in local areas and overly stringent measures for inbound arrivals under the emergency decree.

Chamnan Srisawat, president of the Tourism Council of Thailand (TCT), said reopening should not happen in any area until it has reached the vaccination rate target, while the overall infection curve should be flattened to improve travel confidence.

"After facing the pandemic for almost two years, postponement for a month was not a big deal for us," said Mr Chamnan.

"We would suffer more if the reopening is premature without proper preparation, failing to spark tourism demand."

Sisdivachr Cheewarattanaporn, president of the Association of Thai Travel Agents, said the priority for the government is to ensure the country is safe for travel to build tourist confidence and avoid other nations' warning lists for travel.

Thailand's protection against the pandemic must be considered weak because of the low efficacy rates of the vaccines the government chose to buy and insufficient vaccination rates, making the country vulnerable to a fresh round of the contagion.

One looming question is vaccine antibody levels as a number of residents, particularly in Bangkok, received two doses of the Sinovac jab from June after Thailand was hit by the third outbreak.

The country has been struggling for months with a vaccine shortage, fuelled by government mismanagement. 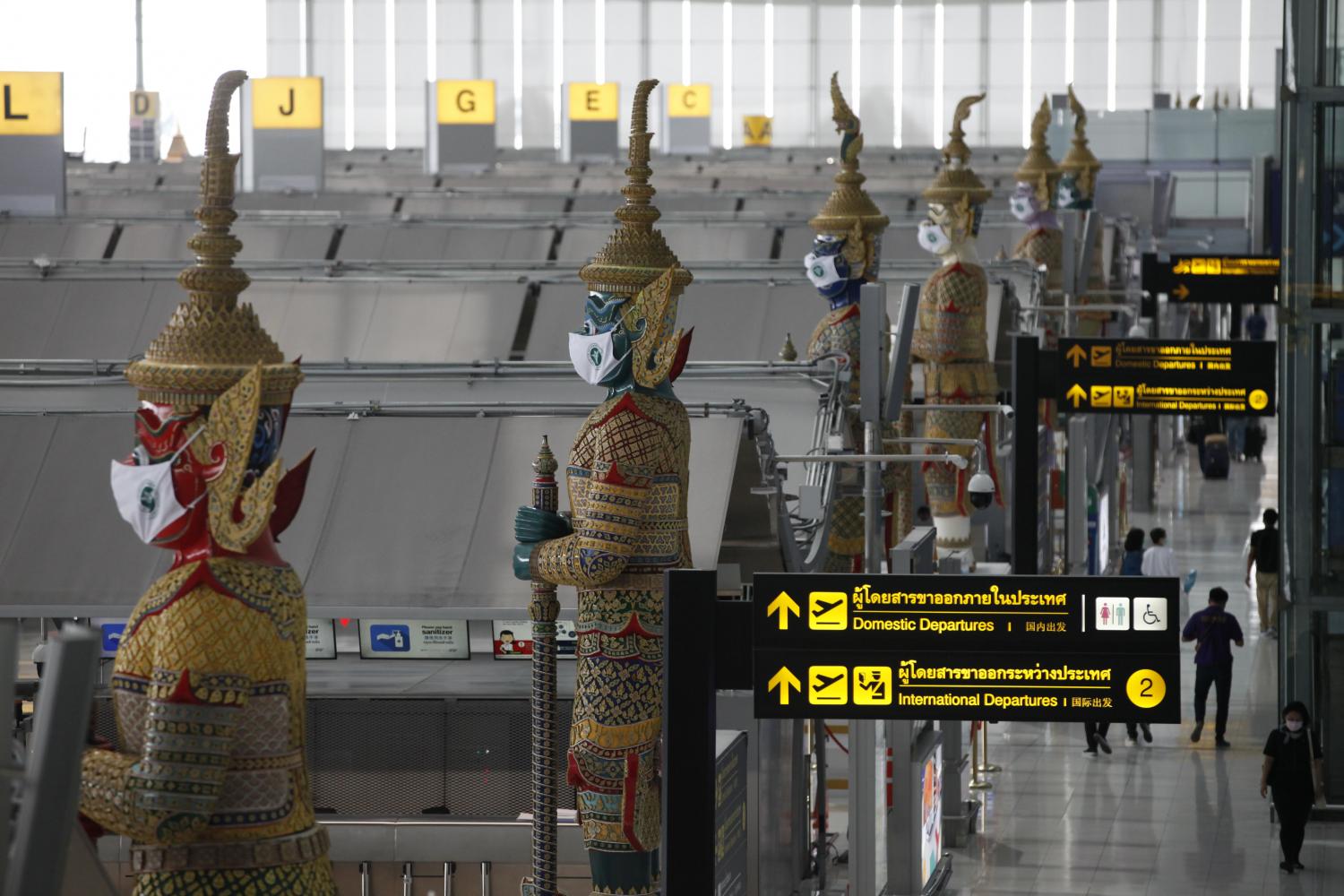 Yaksa statues at Suvarnabhumi airport are adorned with face masks to remind the public to remain vigilant during the pandemic. Varuth Hirunyatheb

Phuket was the first destination to reopen in Thailand to vaccinated foreigners, offering a "sandbox" starting in July.

The majority of residents on the island were inoculated with 679,000 doses of Sinovac, the main vaccine the government chose to procure.

According to a study funded by Beijing Science and Technology Program, those who completed two doses of Sinovac saw antibody levels decline from around six months, and they may need a third shot to effectively bolster immunogenicity.

Phuket, which recorded more than 200 new infections per day from August to September, rolled out a third shot for residents and 23% have received the booster.

Despite the high number of infections, Phuket authorities have no intention to scrap the sandbox, hoping to increase the booster vaccination rate by December.

Two extended destinations from the Phuket scheme -- Krabi and Phangnga -- are also pressing on with reopening plans as the economy is desperate for foreign tourism to help end the drought triggered by the pandemic last year.

This means the vaccination programme cannot end, even if 100% of residents are inoculated, because the government must continue to provide boosters after it chose an ineffective jab for the first phase if it wants Thailand to remain a safe destination for visitors.

Inbound tourism is unlikely to become the magic remedy the prime minister wishes, with the emergency decree possibly prolonged for another two months and new rules under the 2015 Communicable Disease Act -- seen as a mechanism to replace it -- remain unclear.

Supant Mongkolsuthree, chairman of the Federation of Thai Industries (FTI), said the federation agreed with a plan to replace the emergency decree with an amended Communicable Disease Act.

However, the government must ensure the act will lead to the same measures in each province in dealing with emerging cases, said Mr Supant. 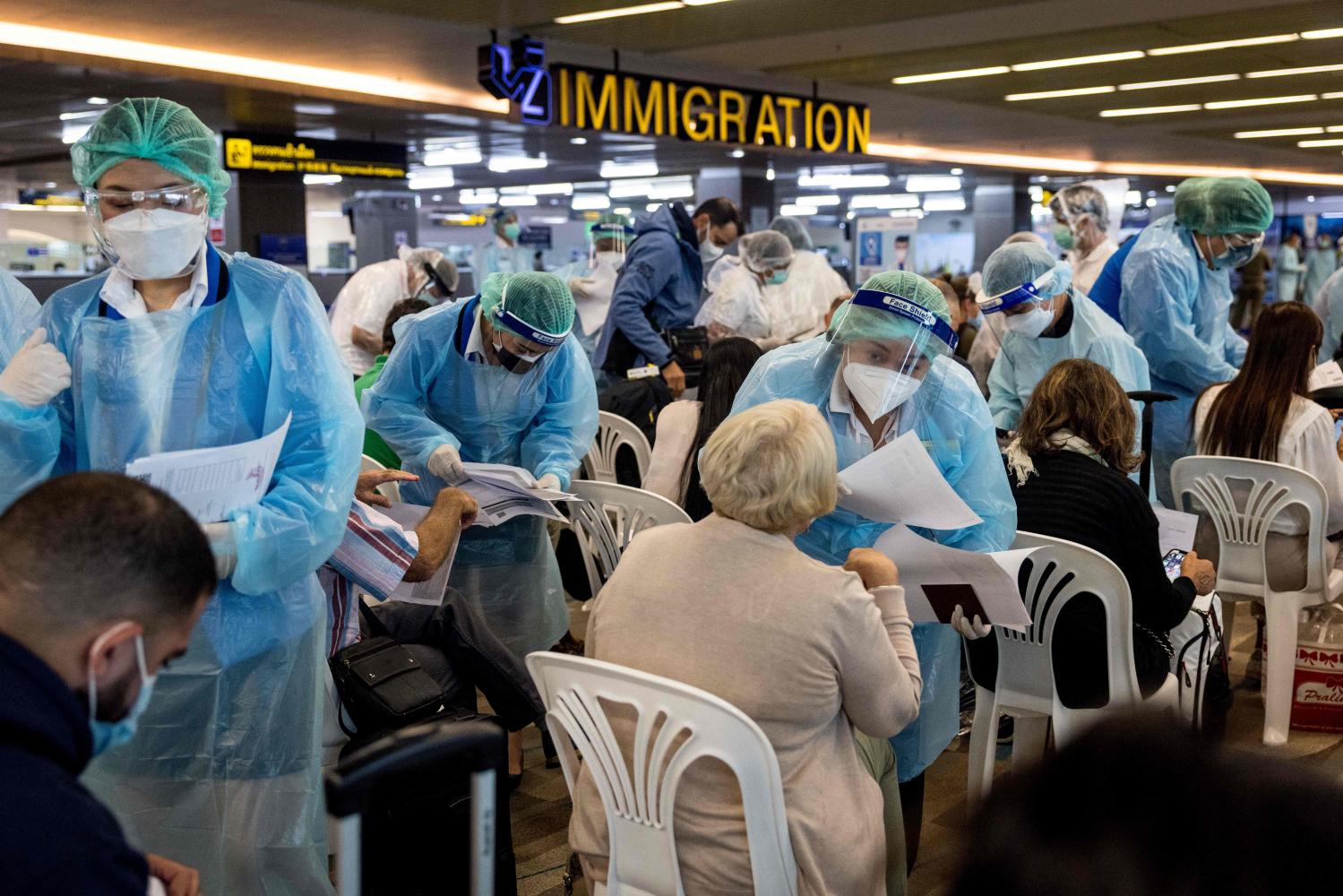 "Tourists will become confused if each province adopts different regulations to deal with the disease," he said.

Under the emergency decree, inbound travellers must complete certain requirements for entry, such as obtaining a Certificate of Entry, with each sandbox scheme mandating tourists prepare numerous documents that can carry a hefty price tag.

For instance, some visitors must have a Fit-to-Fly certificate, health insurance with at least US$100,000 in Covid coverage, pre-payment for Covid-19 tests costing around 8,000 baht, and advanced hotel bookings for the whole trip.

Mr Chamnan said some other countries may look at the Phuket sandbox as a pilot programme, but they should know it has not generated adequate tourism income for the whole supply chain in the province.

TCT already proposed replacing the second and third tests with antigen test kits, which are more affordable, but this proposal was rejected by the Public Health Ministry last week.

Mr Chamnan said one set of standard operating procedures and quarantine-free programmes must be applied everywhere in the country, making communication and messaging easier among state agencies. This could help avoid the same mistakes that happened with the Bangkok reopening, he said.

During the state of emergency, international flights to non-sandbox destinations can serve as semi-commercial flights, meaning passengers have to book and pay for quarantine facilities and proceed to that place immediately upon arrival, while airlines must reduce seat capacity for social distancing, said Mr Chamnan.

Those rules may change after the country amends the Communicable Disease Act, but tourists need clarity before planning a trip. 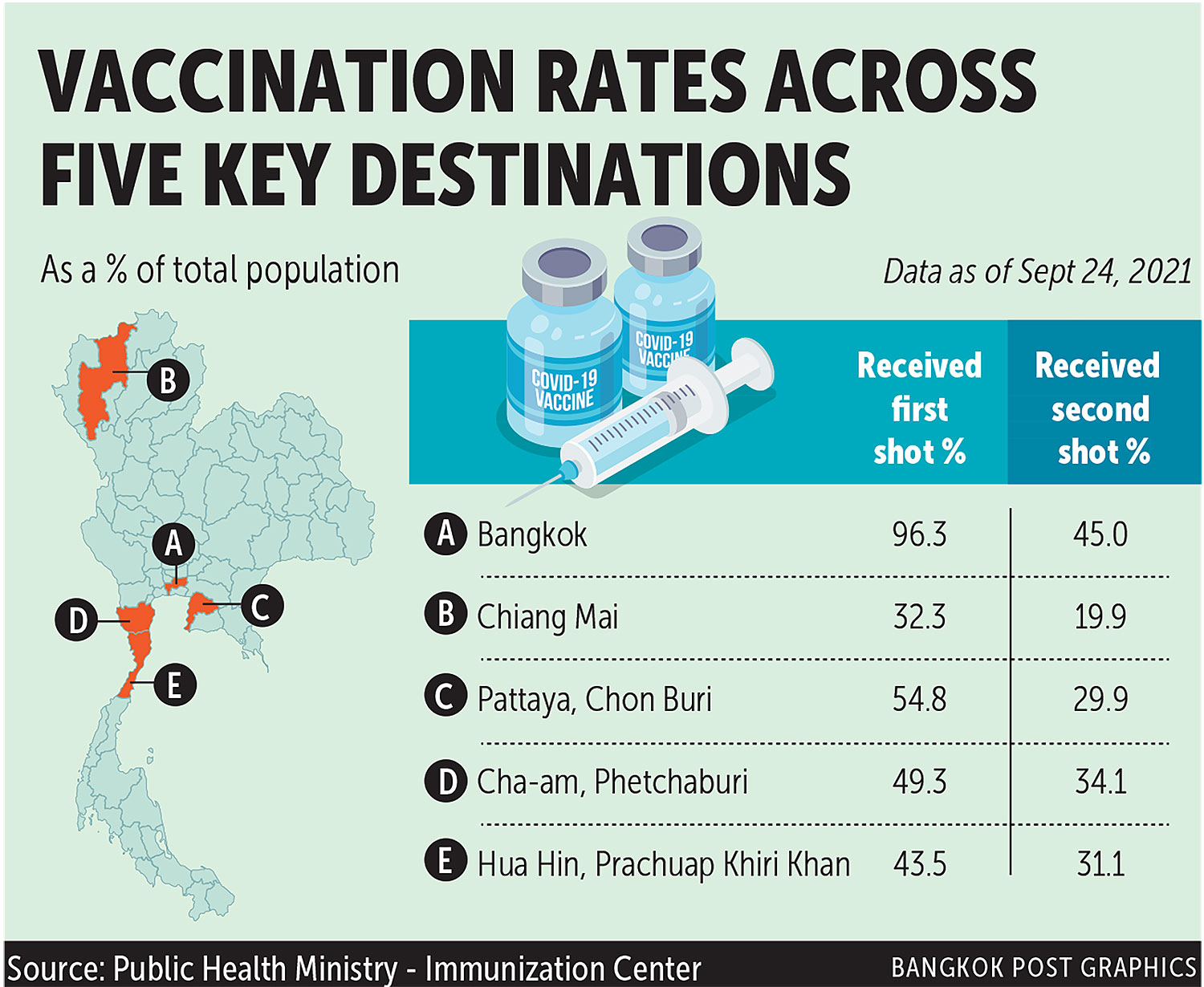 The idea to establish "blue zones" may not be necessary, said Mr Supant, referring to Gen Prayut's proposal to set up areas with good protection against Covid-19 within provinces identified as red zones due to high infection rates.

He said the idea of blue zones may pressure local officials into enforcing very strict measures to prevent infections. This will lead to a strained atmosphere unsuitable for tourism, said Mr Supant.

"Instead of taking a relaxing walk along the streets, tourists will have to stay alert all the time to preventive measures enforced in certain areas, which they would need to follow," he said.

"I think the government should focus on quick vaccinations and treatments, ensuring people can live with Covid-19."

Mr Sisdivachr said the idea of blue zones to bolster tourist confidence is impractical, especially in Bangkok and its suburbs, which span a large area and have a large population.

Blue zones would be difficult to manage and implement preventive measures to keep them as low-risk areas in the long run, as new infections would eventually creep in, he said. 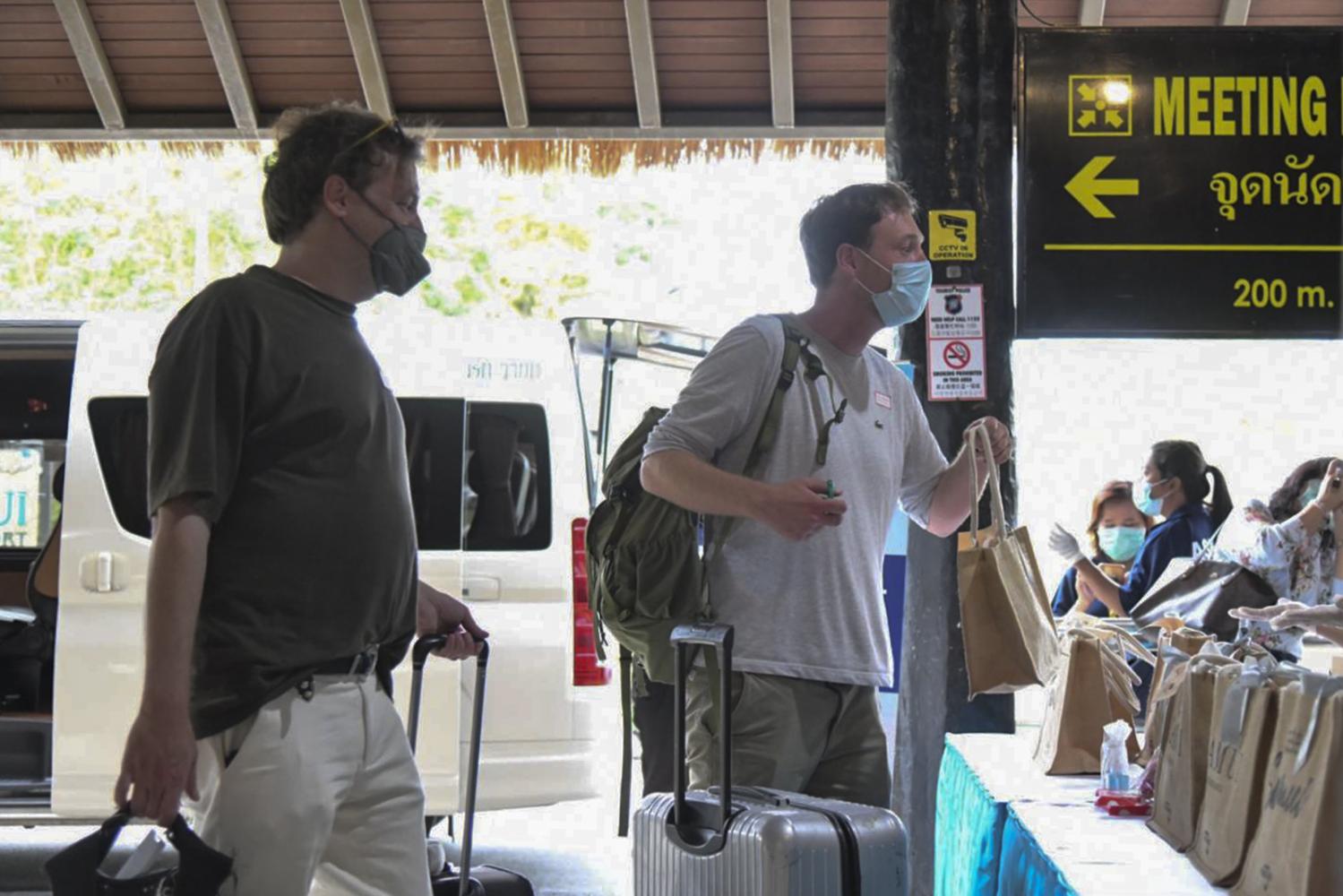 In addition, said Mr Sisdivachr, tourists don't want to be forced to stay in one place, which is part of the drawback of the Phuket sandbox.

Tourists can roam the island freely, but the scheme still did not woo back travellers as planned.

Mr Chamnan said he is bullish on blue zones as a cluster, such as an Andaman group of Phuket, Krabi and Phangnga, instead of limiting it to specific districts that would be too complicated for travellers.

The blue zone proposal requires 70% of the population in these zones to be fully vaccinated, while all workers in the service sector must be jabbed.

Tassapon Bijleveld, executive chairman of Asia Aviation, the largest shareholder of Thai AirAsia, said not every blue zone would be an attractive destination for tourists.

Clearing an area of infections is meaningless if tourists don't want to visit that place, said Mr Tassapon.

"Instead of promoting blue zones, the government should put more effort into making famous red zone destinations blue as soon as possible," he said.

Mr Tassapon said if reopening plans are postponed, the government should turn to the domestic market and help tourism operators strengthen this segment in the upcoming high season because it is the only hope for the economy.

"If they want to adjust the timeline, the government has to accept responsibility for the decision. They should think about the impact of the delay and help us find solutions to stay alive," he said.

"The tourism subsidy campaign slated for next month could help this market, but how much do people want to spend in a situation like this?"

Mr Tassapon said instead of offering a 40% subsidy for hotel rooms and air tickets, the government should increase the subsidy to 70% to encourage people to spend more.

A restart fund for tourism operators is also a necessity so they can hire workers, refurbish hotels and maintain bus fleets after a long pause of almost two years, he said.

Mr Chamnan said the government needs to focus on supporting the domestic market by extending tourism stimulus campaigns to cover the first quarter of next year.

Meanwhile, travel restrictions in every province must have the same standards to spur more domestic trips, he said.

The government can smoothly proceed with its reopening plan if it implements better public health measures, including quickly taking infected people to hospitals to deal with new infections, said the FTI.

Its suggestion is based on the assumption Thailand must learn to function with Covid-19 for the long term.

To allow provinces to reopen and generate tourism revenue, the government must continue with mass vaccination and if new infections occur, deal with them quickly, said Mr Supant.

In addition to protection against the highly contagious virus, the authorities must ensure all infected people receive proper treatment, he said.

The hospital bed shortage that previously marred the image of Thailand must not recur because it will dampen confidence in public health management among foreign travellers, eventually affecting reopening plans, said Mr Supant.