As Thailand remains on course to reopen more areas to vaccinated tourists, aiming to stimulate the national economy during the traditional high season, hoteliers are pinning their hopes on the restart of tourism, particularly in Bangkok.

The capital recently had its reopening plan pushed back to November from October.

Whether Thailand's reopening is an immediate economic success is dependent upon the model set for Bangkok, said Garth Simmons, chief executive at Accor for Southeast Asia, Japan and South Korea.

The sooner Thailand can reopen to the world, the quicker the economy can be revived and people can resume their livelihoods as tourism is a lifeline for many people in the country, he said.

Impacts from the prolonged pandemic and the most recent wave have caused the unemployment rate in the tourism sector to reach 71%, or 3.05 million people in the third quarter this year, from a total of 4.3 million workers prior to the outbreak, according to the Tourism Council of Thailand.

Mr Simmons said even though properties in Bangkok have prepared for the arrival of international guests, Accor is focusing on the domestic market in the fourth quarter this year.

More pent-up demand is expected after the recent relaxation of lockdown measures in Bangkok, he said. 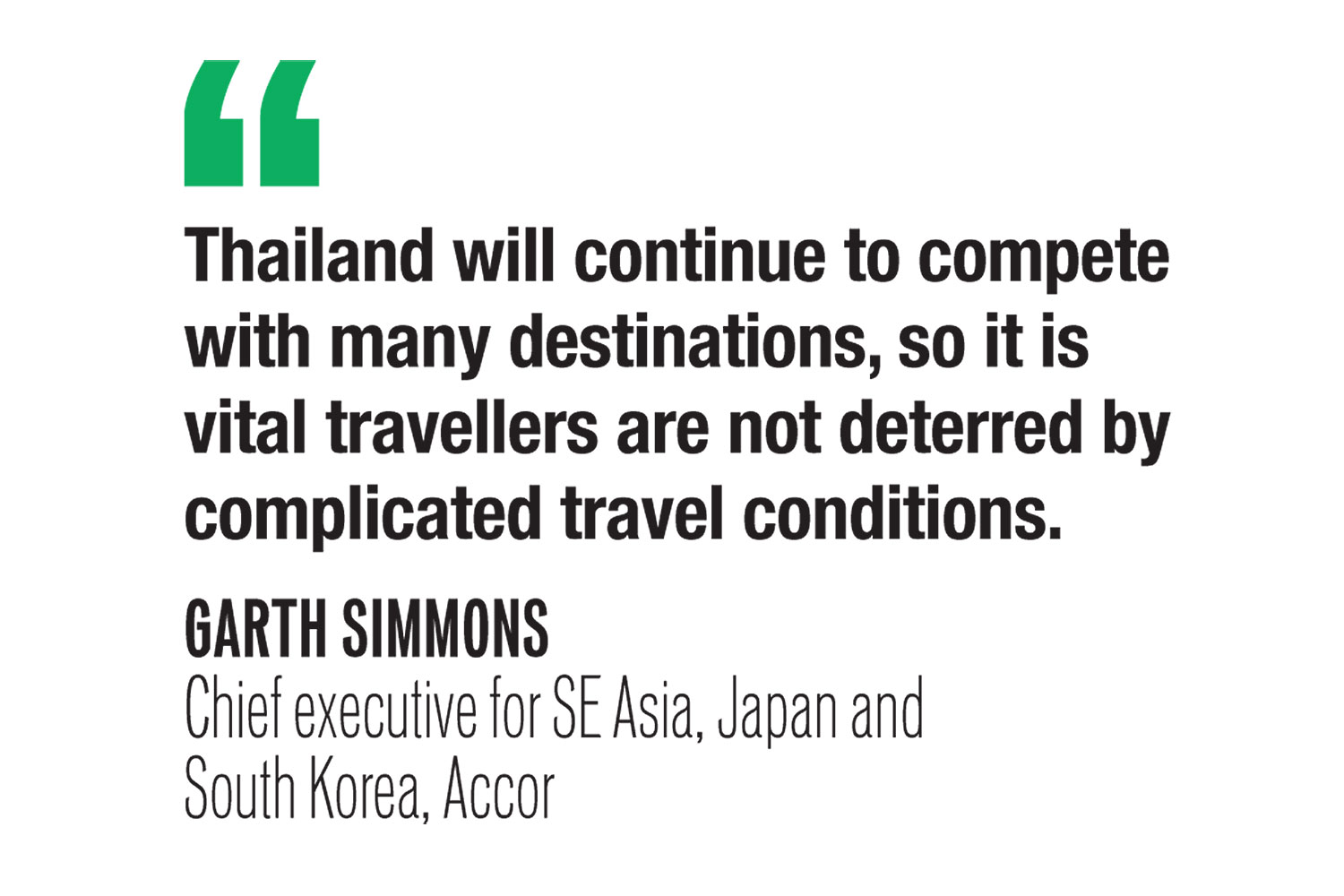 Michael Marshall, chief of commercial operations for Minor Hotels, said the company enhanced its facilities, job training and services for the guest experience, as well as offering promotional campaigns to attract key sources for the reopening.

Wallapa Traisorat, chief executive and president at Asset World Corp (AWC), said if Bangkok can reopen for quarantine-free travel without the requirement of a minimum stay, demand for travel will pick up strongly, helping the economy to get back on track.

AWC's properties in Bangkok largely depend on the Mice (meetings, incentives, conventions and exhibitions) sector, and international groups may not return until the end of next year, causing the company to pivot to domestic Mice and banquet events, she said.

In 2020, AWC properties hosted more than 30 weddings per month during the fourth quarter as couples waited a whole year to throw parties following the first lockdown.

However, events involving mass gatherings this year might slow down in the final quarter because of the volatility of the outbreak and regulations, said Mrs Wallapa.

As large markets in Asia remain firmly shut to international trips, hoteliers' confidence about strong tourist flows to the capital have evaporated.

Similar to many other hotels in Bangkok that turned to serving as an alternative quarantine site, Twin Towers became a hospitel (a hotel with medical services) in order to gain income during the tourism slowdown.

She said the occupancy rate has to reach 50% to cover operational costs when reopening for regular guests, at which point the hotel will employ more staff.

She said the resumption of We Travel Together, a hotel subsidy scheme, should generate demand from locals in provincial areas who want to stay in luxury hotels offering affordable prices.

Foreign arrivals remain muted compared with levels in 2019, though some islands in southern Thailand are open to vaccinated visitors without quarantine.

Hoteliers expect amendments to existing reopening models to effectively bring back more tourists in the future.

Mr Simmons said the government should consider less restrictive conditions in for arrivals and initial stays to fully facilitate a tourism recovery, such as a reduction in the cost of RT-PCR testing or allowing the use of antigen test kits instead.

The complicated certificate of entry (COE) process should also be relaxed, following the lead of other countries that have made similar adjustments, he said.

"Thailand will continue to compete with many destinations, so it is vital travellers are not deterred by complicated travel conditions," Mr Simmons said.

The customer experience throughout the reopening programme has not been smooth, with tourists required to accumulate loads of paperwork during the COE process and face pricey tests, said Mrs Wallapa.

Mr Marshall suggested the government, especially public health and tourism agencies, synchronise their efforts to create a unified and decisive approach to draw a new flow of tourists.

The economy is expected to return to pre-Covid-19 levels in the first quarter of 2023, the Bank of Thailand (BoT) governor told a business forum on Thursday.

Nearly two years into the Covid-19 pandemic, the world remains “dangerously unprepared” for the next major outbreak, according to a new report.