SET-listed Asset World Corp (AWC) plans to review its investment budget and development plans for large projects, repositioning its existing properties as a mix of work, life and leisure to capitalise on a new trend. 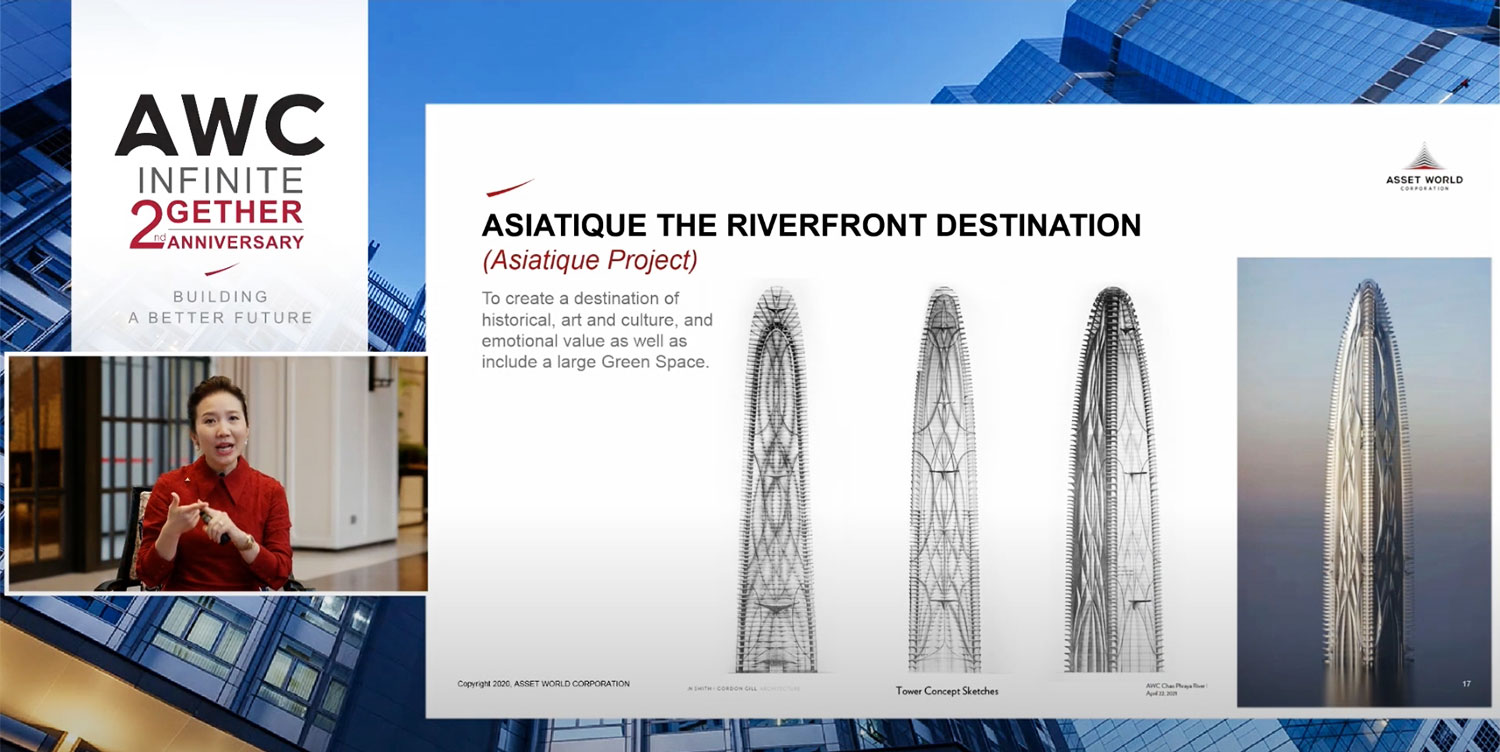 Mrs Wallapa shows a conceptual design of a skyscraper tower being designed by Adrian Smith + Gordon Gill Architecture, the designer that designed the world's tallest building Burj Khalifa. It will be a new iconic landmark at Asiatique the Riverfront.

Chief executive and president Wallapa Traisorat said Covid-19 has changed the way people work, live and rest and it has helped to blend work and leisure into one homogeneous mix.

"Reviewing the investment budget and development spaces at three new mega projects is one of our medium-term strategies," she said. "We want to adjust them to match with timeline, people's new lifestyle and a balance of demand and supply."

At Asiatique, there will be a new skyscraper currently being designed by Adrian Smith + Gordon Gill Architecture, the firm that designed Dubai's Burj Khalifa.

One of the components at the super-tall tower, which will be completed in the next nine years, will be office spaces which will target multinational companies.

AWC wants to add features to serve new lifestyles, offering a mix of work and leisure.

"We are preparing to reposition our current properties to serve the new lifestyle which emerges from the impact of the pandemic," she said. "We will merge some features in a property category into another property type as the lines between each sector have blurred."

Its office properties which now comprise four buildings including Empire Tower, Athenee Tower, 208 Wireless Road Building and Interlink Tower with a combined lettable area of 270,594 square metres will have hospitality features such as a lobby lounge in the lobby and F&B outlets on the rooftop.

AWC's 18 existing hotels, which are the firm's largest portfolio, will add features like a working desk and more comfortable chairs for long hours of usage as the workation emerged as a new lifestyle concept amid the pandemic.

"Those staying at the hotels for workations contributed 20% of the bookings from the usual 2%," she said. "During the pandemic, many guests stayed for a longer time, from two weeks to one to two months. Some guests booked two rooms -- one for their family and one as a working room."

As the retail sector was set zero during the pandemic, AWC's retail portfolios will have activity-based spaces such as playgrounds, leisure and work spaces, depending on each of their target groups.

The six projects which will be repositioned include Gateway Ekamai and Bangsue, Pantip Ngam Wong Wan and Chiang Mai, Tawanna Plaza and LaSalle's Avenue.