Banks to refund victims of scam

Police stepping up their investigations

A Facebook user shows multiple fraudulent cash withdrawals, all for small amounts, appearing in her bank statement. She wrote on a Facebook page on Monday that more than 300 unusual withdrawals, amounting to 20,000 baht, were made. (Photo from Sharing Experience on Unaware Cash Withdrawal Facebook page)

Payong Srivanich, chairman of the Thai Bankers' Association (TBA), said the TBA has concluded with all bank members that banks would pay back money to the victims of these cases within five business days for debit card holders.

In the case of credit cards, the banks will cancel suspicious transactions and they will not demand interest or any fees from cardholders.

The banks will close the accounts of the credit cards used in these irregular transactions and open new ones for customers with no fee charged, he said.

The remaining 4,800 are debit cards with the transaction value of 31 million baht.

The Bank of Thailand and the TBA on Tuesday also held a joint press conference on more details of the cases. 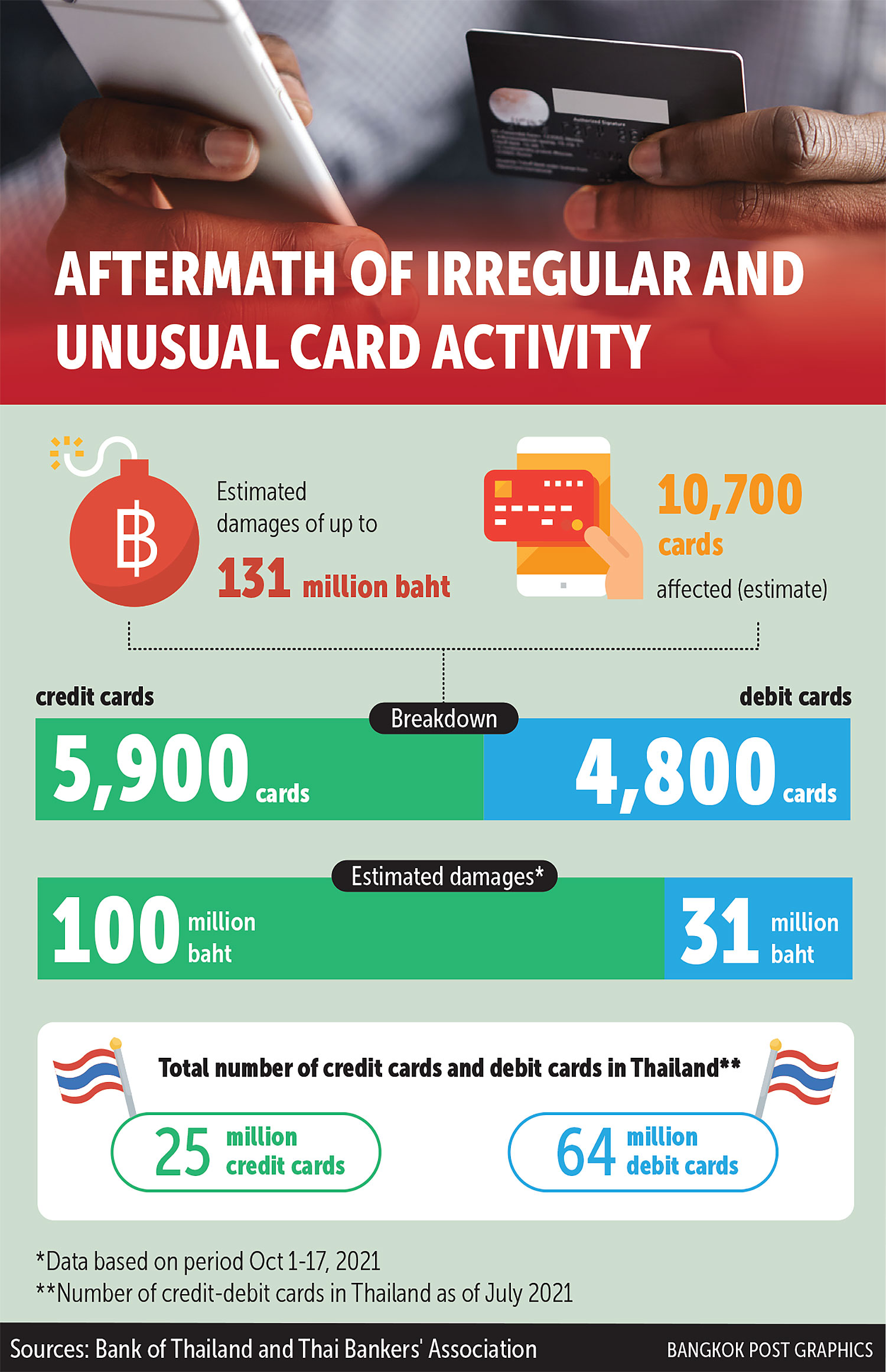 Siritida Panomwon Na Ayudhya, the Bank of Thailand's assistant governor for payment systems policy and financial technology group, said the BoT and the TBA have jointly set guidelines for all banks to step up measures to prevent unauthorised withdrawals of cash debited through plastic cards.

Once the irregularity is detected, the banks should immediately freeze the card usage and alert the customers through all channels. The banks should also pay special attention to transactions made overseas.

The banks currently have a system to monitor suspicious transactions. They set different conditions and credit limits of the card use, varying from types of merchandise and shops.

When they find the customers are affected by such unauthorised transactions, the customers will get money back within five business days in the case of debit cards.

In the case of credit cards, the banks will cancel the fraudulent transactions. Cardholders do not need to pay for the transactions and no interest is charged.

The BoT and the TBA will jointly hold talks with the debit and credit card service providers to ask them to add more identity verification requirements, such as the use of One Time Password (OTP), for debit card usage with online shops.

On Sunday, the BoT and the association issued a joint statement that some of these cases were not caused by data leakage by the banks or hacking but mainly caused by the perpetrators' use of the cardholders' information to do transactions at online shops registered outside Thailand.

Most of the transactions involved small sums of money withdrawal, such as US$1 per transaction.

Prime Minister Prayut Chan-o-cha has ordered urgent action to resolve the issue of irregular online withdrawals of cash debited through bank credit cards after complaints by many cardholders.

Police are stepping up their investigations into the cases.