Reopening of Asean+3 economies after long pandemic will require some careful manoeuvring to unwind accommodative policies and debt relief measures.

The swift and steady progress of the Asean+3 economies -- the latter are China, Japan and South Korea -- in mass vaccinations will be a game-changer for containing Covid-19 and spurring economic recovery.

Over a year and a half into the outbreak, the goal of reaching herd immunity against the virus is closer to becoming a reality for the region, while the pandemic is expected to enter an endemic state.

And while China is still relentlessly pursuing a "zero Covid" policy, other countries including Thailand are opening up, acknowledging the risk but saying the economic consequences of more lockdowns are too much to bear.

The combination of efficacious vaccines, strong and targeted containment policies and effective support for those affected is fuelling optimism. As a result, forecasters are starting to get a better sense of what post-pandemic conditions might look like, according to the Asean+3 Macroeconomic Research Office (Amro).

Several economies in the region eased restrictions in early 2021 when infections appeared to have been brought under control, but were forced to reimpose them when the Delta variant spread like wildfire around the world.

As such, Brunei, Hong Kong and Indonesia maintained their tight restrictions while Cambodia, Japan, Malaysia, Singapore and Thailand imposed tighter measures to minimise the critical impact of the Delta variant.

The transmissibility of the new strain, even among the vaccinated, has undermined the effectiveness of the "zero Covid" strategy adopted by some countries like New Zealand, Australia and South Korea, among others, and caused many to pivot to more sustainable pandemic management strategies. 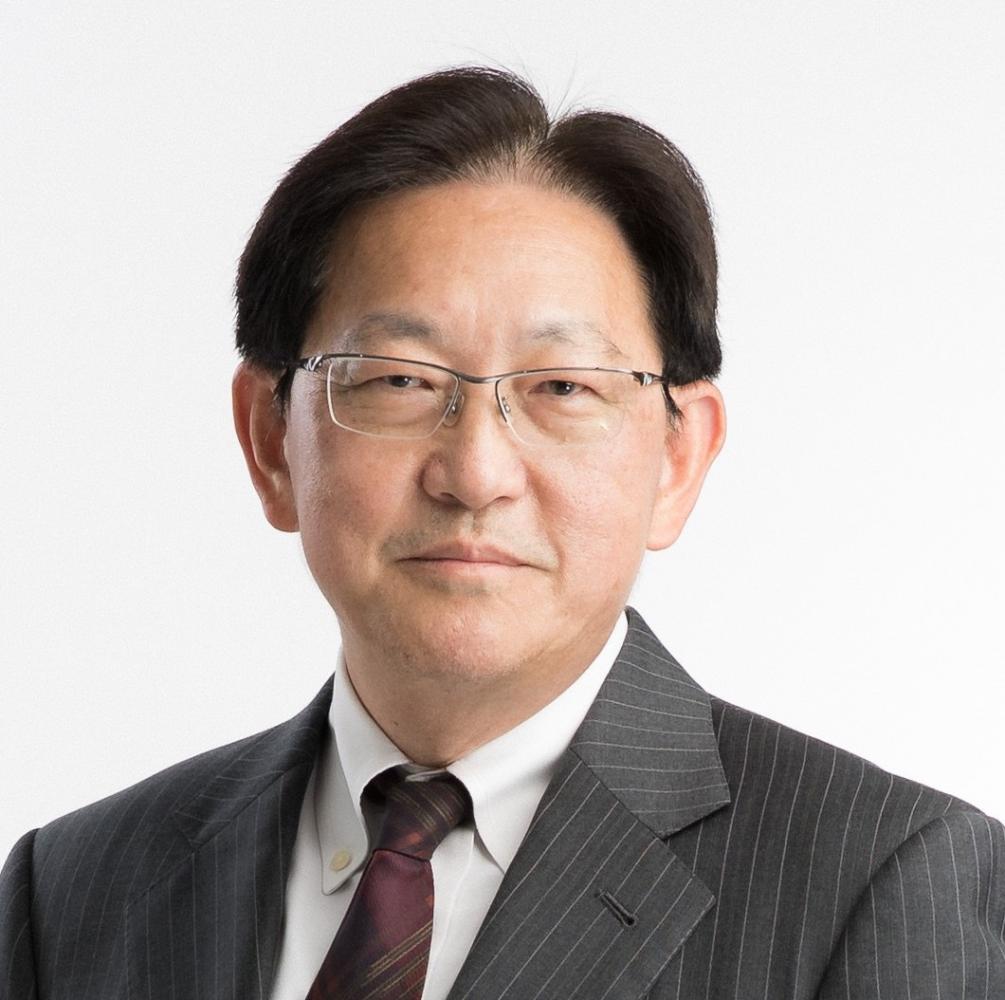 The ebb and flow in infections, even in some highly vaccinated economies, further underscores the complexity of economic reopening, Amro noted.

Consequently, the downside risks caused by the Delta variant have put a brake on the recovery momentum for 2021, resulting in downward revisions to Asean+3 growth forecasts for this year.

According to Amro, the region's gross domestic product (GDP) is forecast to expand by 6.1% in 2021, compared to its 6.7% projection in March. Inflation is predicted to rise to 2.9% in 2022, from 2.4% this year, mainly due to elevated energy and commodity prices.

But, with most Asean members anticipated to achieve their vaccination targets by early 2022, Amro analysts believe almost all of the 13 economies that they cover will register stronger growth next year.

"The road to recovery is paved with vaccinations. With the majority of regional economies staying on track to achieve their vaccination targets by early 2022, it is expected the Asean+3 region will grow by 5% next year," Dr Hoe Ee Khor, Amro chief economist, told a recent virtual media briefing.

Growth in the 10-member Asean bloc is likely to be much slower at 2.7% overall, owning to recurring waves of infections and the renewed tightening of containment measures.

The Asean+3 growth trajectory will depend on how the region makes the transition to an endemic new normal, while attempting to heal the economic scars inflicted by the pandemic.

The region is adapting and learning to function in the more uncertain environment. The pandemic has transformed the way businesses and consumers transact, accelerated digitisation and generated new business models.

Manufacturing sentiment has remained higher than it was during last year's trough. The strong turnaround in global demand for electronics, autos and consumer products is benefiting the region's manufacturing exports while supporting the recovery.

The Plus-3 economies are continuing to drive regional recovery -- especially China, which has fully vaccinated more than 74% of its population, making it possible for the domestic economy to open up fully.

A surge in vaccination rates has driven governments to ease domestic mobility restrictions and restart international leisure travel via travel bubbles and sandboxes, which should enable the gradual reopening of some hard-hit service sectors such as tourism and hospitality.

Mobility indicators have picked up in recent months as infection rates decline and immunity to the virus increases in most countries, auguring well for future consumption.

Full resumption, however, is likely to take a while, given the wide variation in vaccination rates (at least one dose) across the region, ranging from 20.6% in Myanmar to 57.3% in Thailand, 78% in China and 85% in Singapore as of last week, according to Amro. 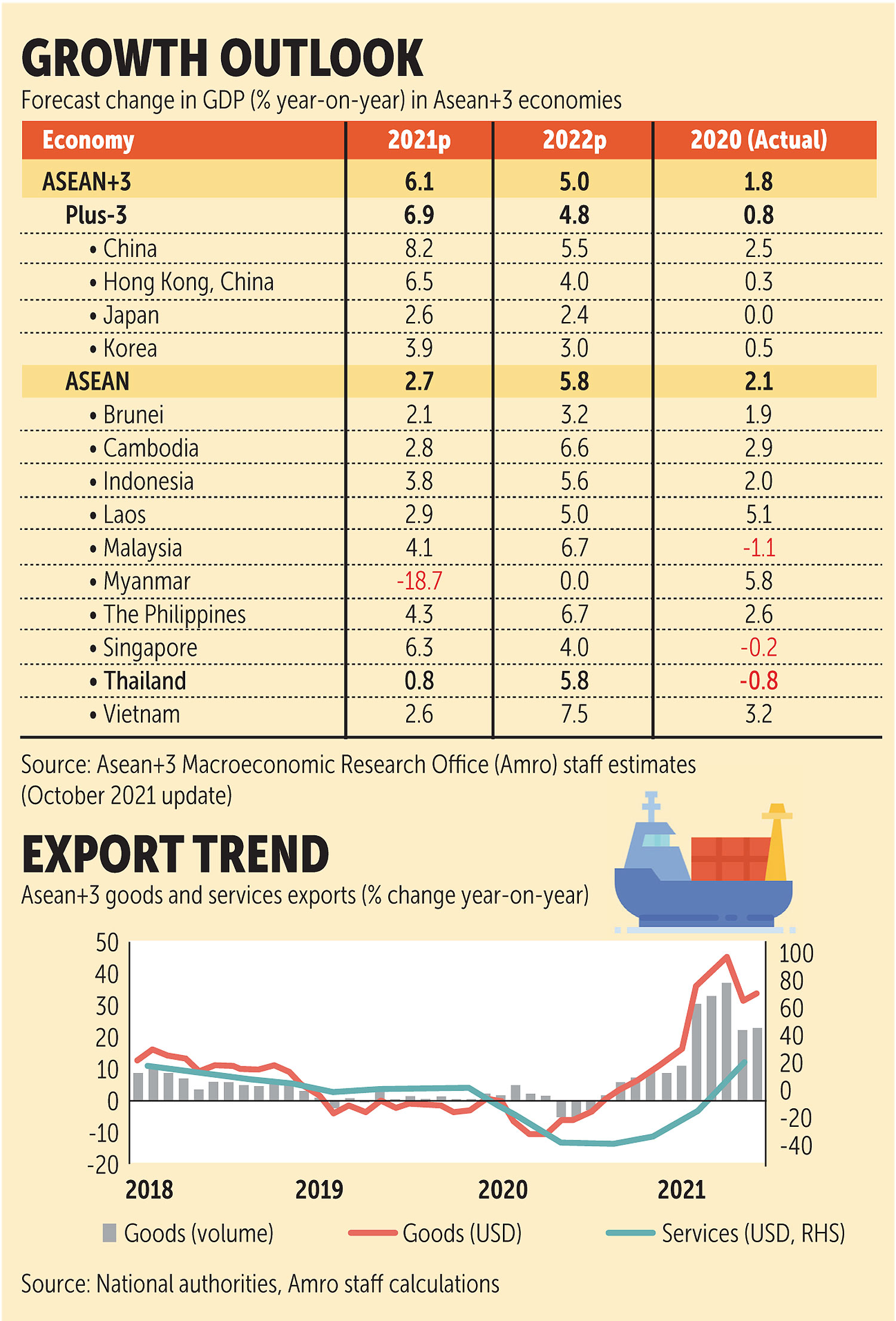 Despite the feeling of relief in some quarters, the coronavirus is unlikely to vanish in the foreseeable future. The persistence of the virus, even if countries learn to manage its impact, will prolong human distress, dampen economic growth and increase inequality.

Economic activity began to decelerate in the second quarter of 2021 largely due to the spread of the Delta variant. Growth forecasts have been downgraded for most countries in the region, the World Bank said in its East Asia and Pacific Economic Update released in October.

The uneven economic recovery in the region, however, is facing a setback. While the Chinese economy is projected to expand by 8.5% from a low base the year before, the rest of the region is forecast to grow at just 2.5%, compared to forecast of 4.4% in April.

Employment rates and labour force participation have dropped while nearly 24 million people will not be able to escape poverty in 2021, the report said. All households have suffered, poorer ones were more likely to lose income, sell off productive assets, experience food insecurity and lose schooling for children.

Household financial distress often leads to a deterioration in diet and increases the risk of stunting, which impedes children's development and earnings as adults. Limited engagement in online learning, largely because of lack of reliable internet access or devices, could cost the average student in school today a 5.5% drop in expected earnings every year.

The pandemic has also been uneven in terms of the impact and recovery across sectors and economies. Those close-contact services sectors, among others, are still struggling, so they should continue to be provided with policy support to minimise their wounds and facilitate the transition to the new economy, said Dr Khor. 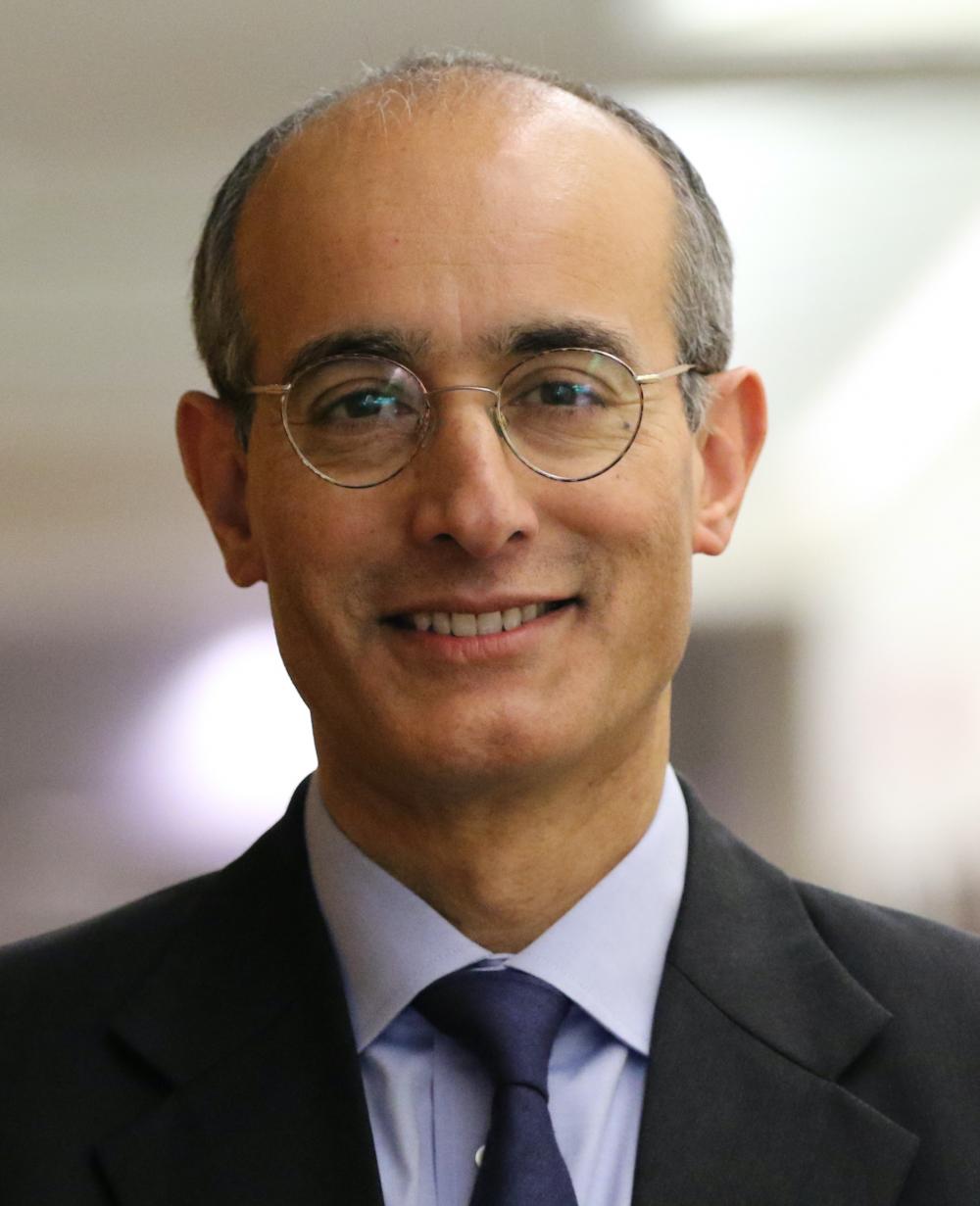 Economies with slower vaccination progress, less policy support and greater reliance on travel and tourism will likely lag behind, widening intra-regional disparities in living standards and reversing gains in poverty reduction, he added.

Policymakers need to ensure that the observed unevenness in the recovery across sectors, segments of the population and individual economies does not lead to lasting inequalities and social inequities, according to Amro.

"Whereas in 2020 the region contained Covid-19 while other regions struggled, the rise in Covid-19 cases in 2021 has decreased growth prospects for 2021," she added.

Across the East Asia and Pacific countries, the share of the population that received at least one vaccine dose rose from an average of 18% by the end of June to 35% by the end of August, based on World Bank analysis.

Countries with higher vaccination coverage worldwide experience faster growth. Low availability held back vaccination rates in larger countries like Indonesia, the Philippines and Vietnam. Smaller countries, like some of the Pacific islands, benefited from vaccine donations, whereas the others are constrained by limited distribution infrastructure.

"Accelerated vaccination and testing to control Covid-19 infections could revive economic activity in struggling countries as early as the first half of 2022, and double their growth rate next year," said Aaditya Mattoo, the bank's chief economist for East Asia and Pacific.

"But in the longer term, only deeper reforms can prevent slower growth and increasing inequality."

The bank estimated that most countries in the region, including Indonesia and the Philippines, should be able to fully vaccinate more than 60% of their populations by the first half of 2022. Although that would not eliminate infections, it would significantly reduce mortality, allowing a resumption of economic activity.

However, 60% coverage would not eliminate infections or the generation of new coronavirus variants. Subsequently, countries will need to seek to achieve higher coverage and incorporate effective measures to contain Covid.

Given the constant mutation of the coronavirus to more infectious and more vaccine-resistant variants, policy responses will need to be as nimble and quick to change as the virus.

International assistance is also needed to support national efforts in all these areas, especially in countries with limited capacity, it added. 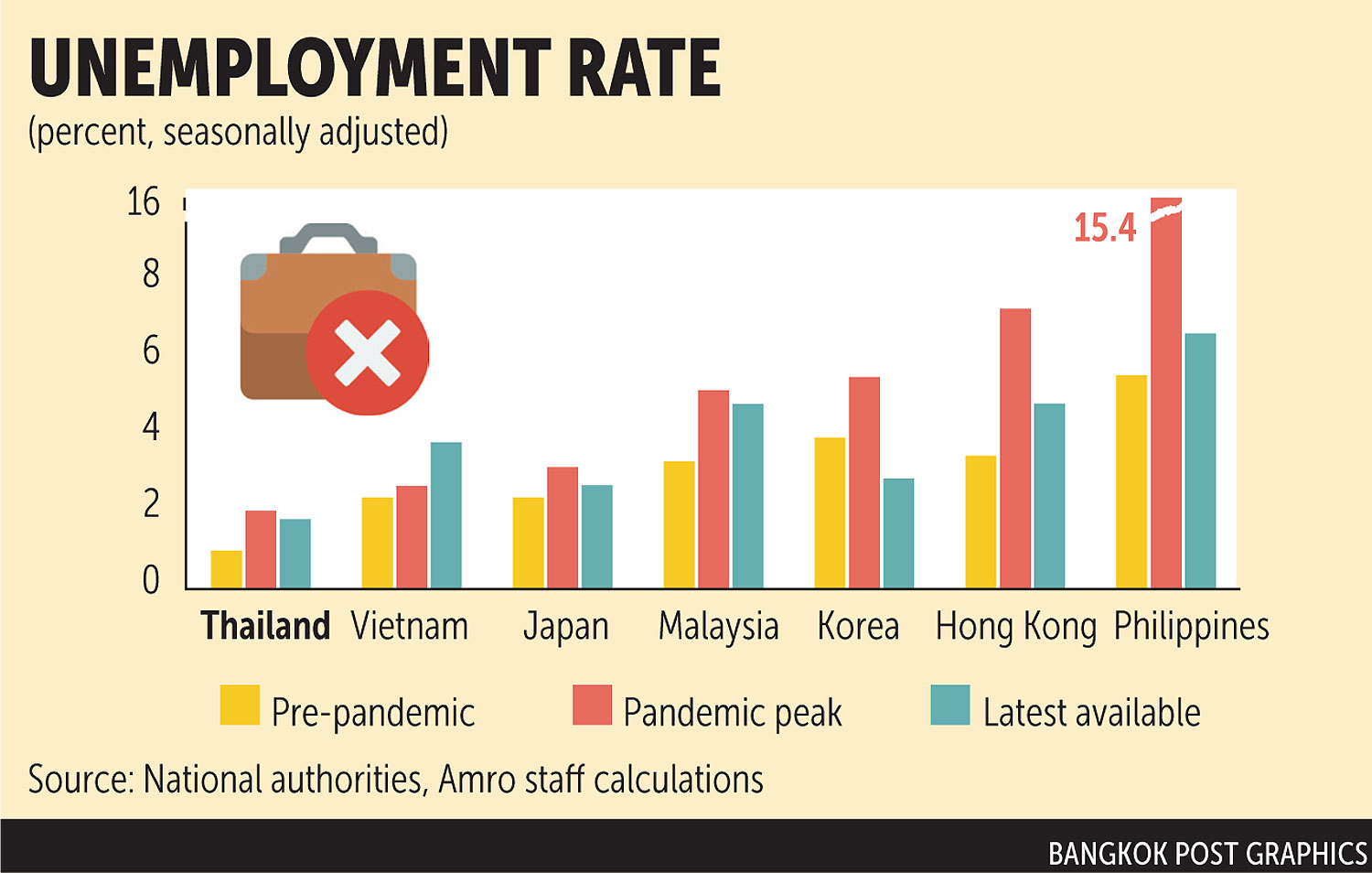 The adverse impact of the pandemic on the region has been mitigated by unprecedented policy actions, while economies that are recovering well have begun to scale back those measures.

When the severity of infections has been constrained and regional economies are on the way to recovery, several support and stimulus policies that were used to tide over firms and individuals during the crisis are set to expire by the end of this year.

However, any premature or miscommunicated termination of financial support measures could potentially trigger economic turmoil. That would lead to a sharp "cliff effect" and financial instability, the Amro pointed out.

"Tapering pandemic support will be the great balancing act for the Asean+3 in 2022," said Li Lian Ong, group head of financial surveillance and regional surveillance at Amro.

"Exiting too quickly risks derailing the region's recovery; exiting too slowly risks propping up unviable businesses and sectors at huge expense to the fiscal purse," she added.

"We are really concerned that if they pull back the rug too rapidly, there could be a shock to the businesses and that could trigger financial distress," said Dr Khor. "We think that there's a need for continuing policy support to those sectors that are hit hard by the pandemic."

Any withdrawal of policy support needs to strike a balance between preserving the remaining policy space and supporting the rebound. Achieving both objectives requires successful vaccination campaigns and stronger healthcare systems. "Tapering pandemic support will be the great balancing act for the Asean+3 in 2022," says Li Lian Ong, group head of financial surveillance and regional surveillance at Amro. Photo: Rendy Aryanto

As the pandemic is gradually being curbed, policymakers should get ready to normalise monetary policy-easing measures in a calibrated fashion, according to Chaipat Poonpatpibul, Amro's lead economist.

To steer clear of cliff effects, phasing out of accommodative monetary policy and debt relief measures should be launched when a sustained economic recovery becomes evident, said Dr Chaipat.

In addition, policymakers should be aware of those challenges in a post-pandemic scenario stemming from reduced economic resilience and widening economic inequality -- which need to be tackled by strengthened economic reforms, improved social safety nets and skilful macroeconomic management, he added.

According to the World Bank, policies should support companies but not impede entry and exit. Extending support to productive firms must be accompanied by facilitating the entry of new, innovative firms through business environment reforms, and allowing the exit of weak firms through better resolution frameworks.

It is also necessary to equip firms with the skills to embed technology in their business, while competition policies should be in place to ensure openness to trade and investment and to strengthen incentives for firms to adopt new technology.

There is no "one size fits all" exit strategy, given that each economy should ponder existing macro- and socioeconomic conditions, such as healthcare capacity, the speed and trajectory of economic recovery, and policy space, the Amro pointed out.