A tourist enjoys a spectacular vista of Bangkok from the Mahanakhon Skywalk, one of the capital's tallest buildings. (Photo: Patipat Janthong)

Bangkok was ranked 68th out of 80 global cities for facilitating remote work, weighed down by its employment compliance rules, according to a study by WorkMotion, a global HR platform facilitating companies hiring remote employees.

Melbourne was ranked first, followed by Montreal, Sydney and Wellington.

The study gauges which global cities are most accessible and attractive for remote workers by assessing factors related to employment compliance, living costs, infrastructure and liveability.

Carsten Lebtig, co-founder and managing director of WorkMotion, indicated technology for remote work has been well established and in use prior to the pandemic, noting what has changed in the intervening period is the mindset companies have towards remote working.

Many companies are beginning to look further afield when hiring employees, comfortable with the idea that the best person for the job might be located in a different country, he said.

According to Mr Lebtig, only 11 cities in the study offer a digital nomad visa, which is a specific document that allows remote workers to continue their employment in the country of relocation, demonstrating that the majority of cities still lag behind in this area.

"We expect to see this change over the next few years, as remote working becomes more common and cities begin to recognise the benefits it can bring," he said.

Referring to Bangkok, he said the capital has areas to improve.

"Bangkok is currently being held back by its employment compliance rules, which makes it hard for companies to easily employ remote workers based elsewhere," Mr Lebtig said.

There are also more difficult employment regulations related to remote workers in comparison to other cities in the study, he noted.

Bangkok was placed 70th out of 80 for access to housing, meaning it is difficult to find appropriate accommodation, he said. 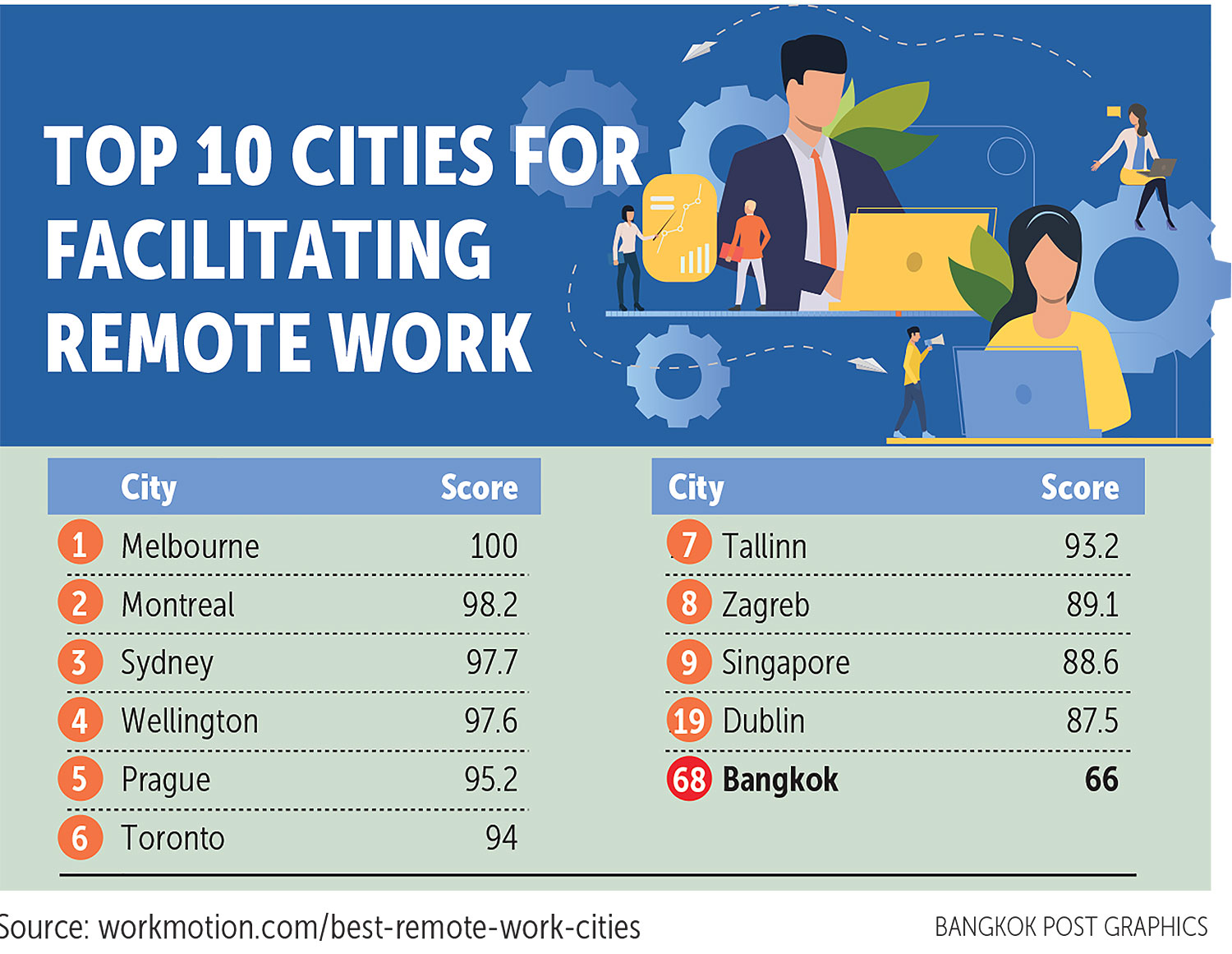 It also has room to improve in the category of civic infrastructure. Bangkok was placed 77th out of 80 for political stability, 68th for LGBT+ equality and 73rd for gender equality.

Mr Lebtig said he is aware that the Thai government has recently taken steps to improve by proposing a digital nomad visa.

"This is an important step in growing Bangkok's attractiveness for remote workers, and will likely see a notable increase in the number of remote workers moving to Bangkok and elsewhere in Thailand," he said.

Bangkok's ranking could be improved by simplifying the employment compliance process through legal measures and ensuring greater regulatory efficiency.

"It could also improve by simplifying the remote working legal requirements and ensuring employers are obliged to provide things like specific equipment for remote workers," he said.

According to Mr Lebtig, the number of remote workers is expected to rise in the coming years, which could lead to economic opportunity for cities around the globe.

"Many cities risk missing out on this trend by not legislating to attract remote workers, but Thailand has taken important steps to do this by introducing a specific visa for them," he said.

He also added business leaders should view remote working and the new employment landscape as an opportunity.

"The rise of remote working gives companies greater flexibility and choice when it comes to their workforce," he said.