The Investor Confidence Index (ICI) for stocks over the next three months surged to a record high, spurred by strong prospects of a tourism rebound after the country's reopening and progress in vaccine rollouts that will attract foreign fund inflows to the Thai stock market next year. 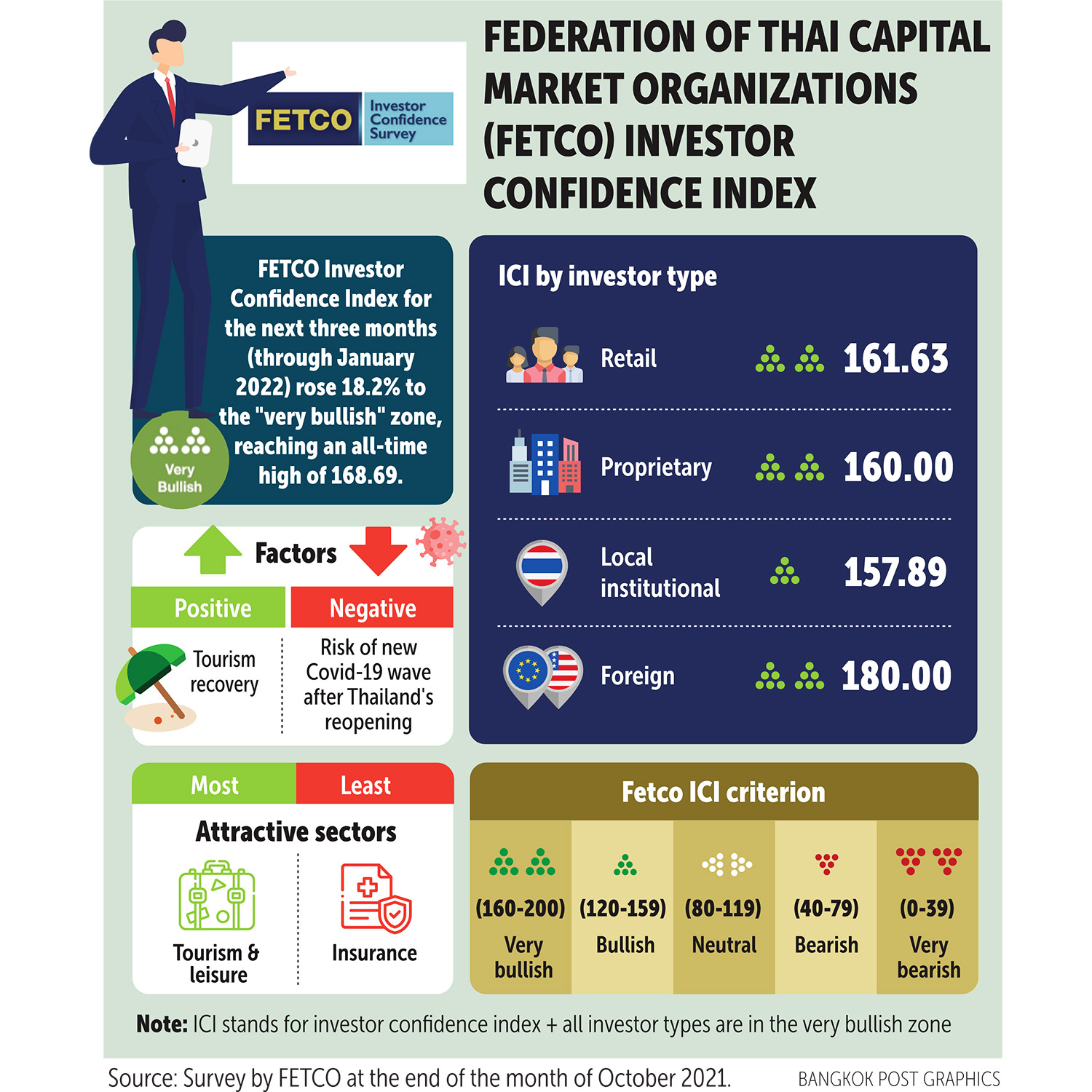 Paiboon Nalinthrangkurn, chairman of the Federation of Thai Capital Market Organizations (Fetco), said the ICI in October, which anticipated the market condition over the next three months, rose 18.2% to 168.69, the highest since the index was launched.

The index rose into the "very bullish" territory as investors expect the tourism industry will be revived by the return of foreign tourists and the progress in vaccine rollouts will ease the pandemic and help the economy to recover.

According to the survey, the most attractive sectors are tourism and leisure.

However, despite the positive factors, concerns over a probable flareup of the pandemic after the reopening, economic recession and international conflicts still cloud investor sentiment.

The Thai stock market has risen by only about 3% since the country's reopening on Nov 1, so the bourse still has plenty of room for upsides.

"With these prospects, we still expect the SET Index to reach 1,800 points next year", said Mr Paiboon.

He said Fetco supports the government's policy to reopen the country. It views that the measures will help businesses to recover and believes that even if there is a resurgence of the virus, the situation will not become too severe as many people are already vaccinated.

However, he said the government still needs to make sure there is sufficient hospital capacity for patients in case of a flareup.

"If the country has to go back into a lockdown again after the reopening, the economy will suffer huge damage. The country must be prepared for the reopening as best as possible," said Mr Paiboon.

He said if everything goes as planned, GDP will rise to 3.5% next year, assuming the number of foreign tourists will reach 10 million.

If the number of tourists exceeds 10 million, GDP may reach 4% and attract more funds into the Thai bourse.

He added that factors to monitor include spiralling energy prices, China's slowing economic growth due to domestic energy shortage, US-China conflicts driven by international trade and relations between the US and Taiwan, and rising inflation.