Economy to eke out 1.2% growth
Business

Economy to eke out 1.2% growth

The Thai economy is expected to grow by 1.2% this year, recovering from a 6.1% contraction in 2020, with next year's expansion predicted to be between 3.5-4.5%, according to the National Economic and Social Development Council (NESDC).

However, the state planning unit warns that in the year to come the government needs to focus on containing domestic Covid-19 outbreaks and preventing a resurgence, continuing to assist businesses and economic sectors that have been hit by the pandemic, maintaining growth momentum from household expenditure and domestic tourism, and boosting exports.

The government has also been advised to stimulate private investment, maintain growth momentum from government expenditure and investments, and closely monitor any global economic volatility that might exacerbate domestic economic stability.

"The Thai economy is expected to see a strong recovery in the fourth quarter of this year thanks to the country's reopening early this month," said Danucha Pichayanan, secretary-general of the NESDC. "This year's growth is estimated at 1.2%, and 3.5-4.5% next year, boosted by the recovery in domestic demand and manufacturing production, following the improving Covid-19 situation and the progress on vaccine distribution, the return of domestic tourism after the easing of international travel policy, and the expansion of exports."

The export value of goods in US dollars is anticipated to expand by 4.9% next year, with private consumption and private investment expected to increase by 4.3% and 4.2%, respectively. Headline inflation is estimated to be in the range of 0.9-1.9%, and the current account is projected to record a surplus of 1% of gross domestic product.

In a related development, the NESDC on Monday reported that the Thai economy contracted by 0.3% year-on-year in the third quarter of 2021, compared with 7.6% growth in the previous quarter.

The contraction largely stemmed from the ongoing and widespread outbreaks of Covid-19, which adversely impacted economic activities and people's livelihoods.

After seasonal adjustments, the economy shrank by 1.1% from the second quarter. In the first nine months of 2021, the Thai economy expanded by 1.3%. 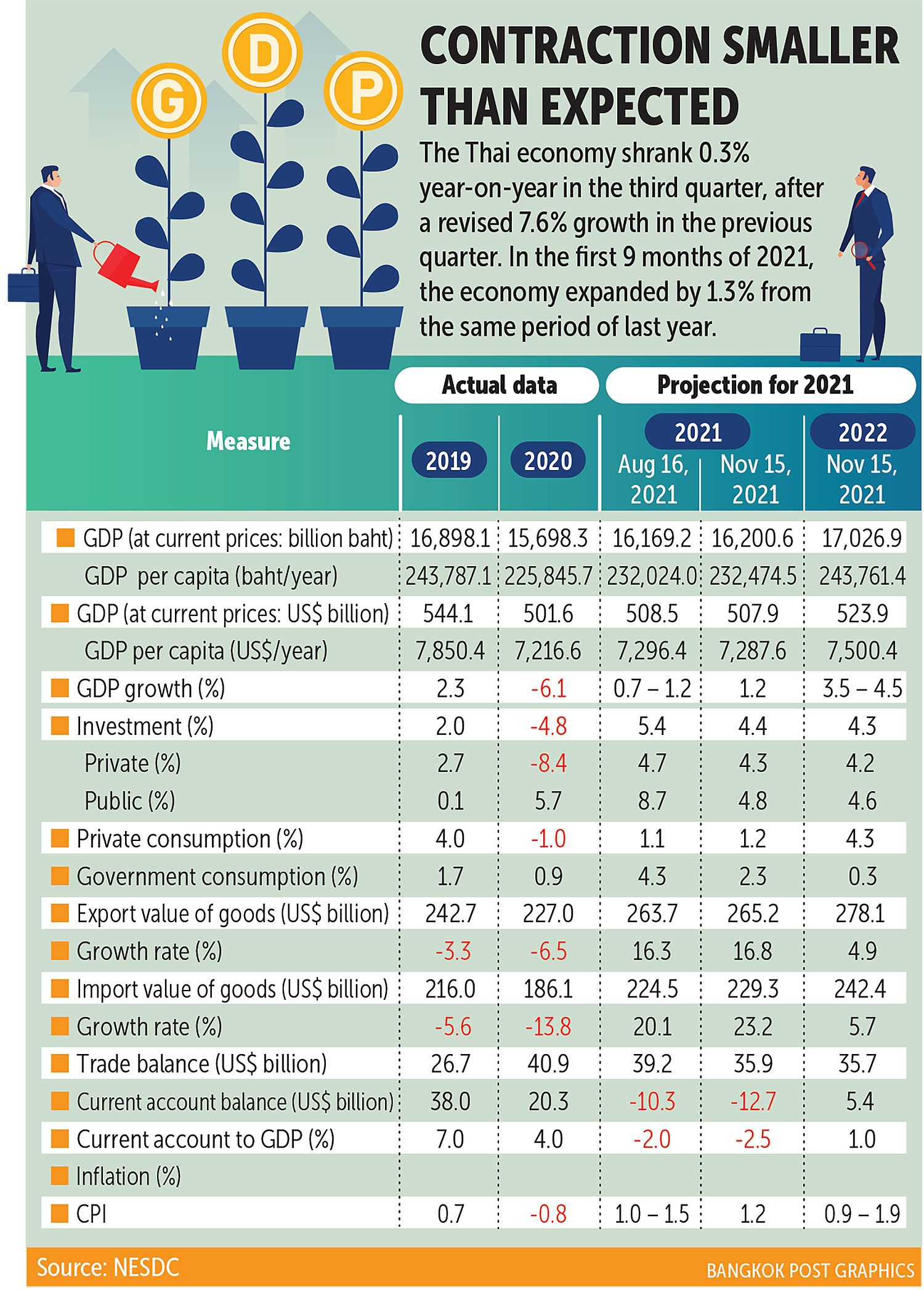 Mr Danucha said the Thai economy in the third quarter saw a smaller contraction than projections by many economic forecasting institutes because government stimulus measures were implemented during the period, such as the co-payment subsidy scheme, cash handouts to welfare card holders, and aid for workers under Section 33, 39 and 40 of the Social Security Act.

In a separate event, Finance Minister Arkhom Termpittayapaisith told a seminar on Monday that the economy should expand 1% this year and 4% in 2022.

According to Mr Arkhom, the government is set to inject about 3.7 trillion baht into the economy, including a spending budget of 3.1 trillion baht and some 300 billion baht under the emergency loan decree.

He predicted that the tourism sector would gradually recover next year, while exports are expected to remain competitive because of the favourable baht level, and the government will continue to invest in infrastructure.