As the RCEP takes effect, most participants can expect net gains from the world's biggest trade pact to give their economies a needed lift.

Ravaged by the fallout from Covid-19, countries in Asia and the Pacific are hoping to revitalise their pandemic-hit economies as the Regional Comprehensive Economic Partnership (RCEP) takes effect to create the world's largest trade bloc.

The 15-member RCEP is poised to have a "significant impact" and turn the region into "a new centre of gravity for global trade", according to a recent report by the United Nations Conference on Trade and Development (Unctad).

"In the current context of the pandemic, the entry into force of the RCEP can also serve an additional purpose: trade resilience," the report noted, observing that trade within other existing agreements had proved more resilient against the Covid-inflicted downturn.

Overall, trade within the bloc is expected to increase by nearly US$42 billion, equivalent to an almost a 2% rise from the 2019 level, driven mainly through trade diversion away from non-member nations, according to the Unctad report.

At the core of the RCEP are tariff concessions, with members due to eventually eliminate levies on more than 90% of goods traded within the bloc. This will particularly benefit China, Japan and South Korea -- Asia's biggest economies, which are all connected by a free trade agreement (FTA) for the first time. Tariffs on Japanese exports of some electric vehicle components to China, for example, will be removed, according to Japan's trade ministry. 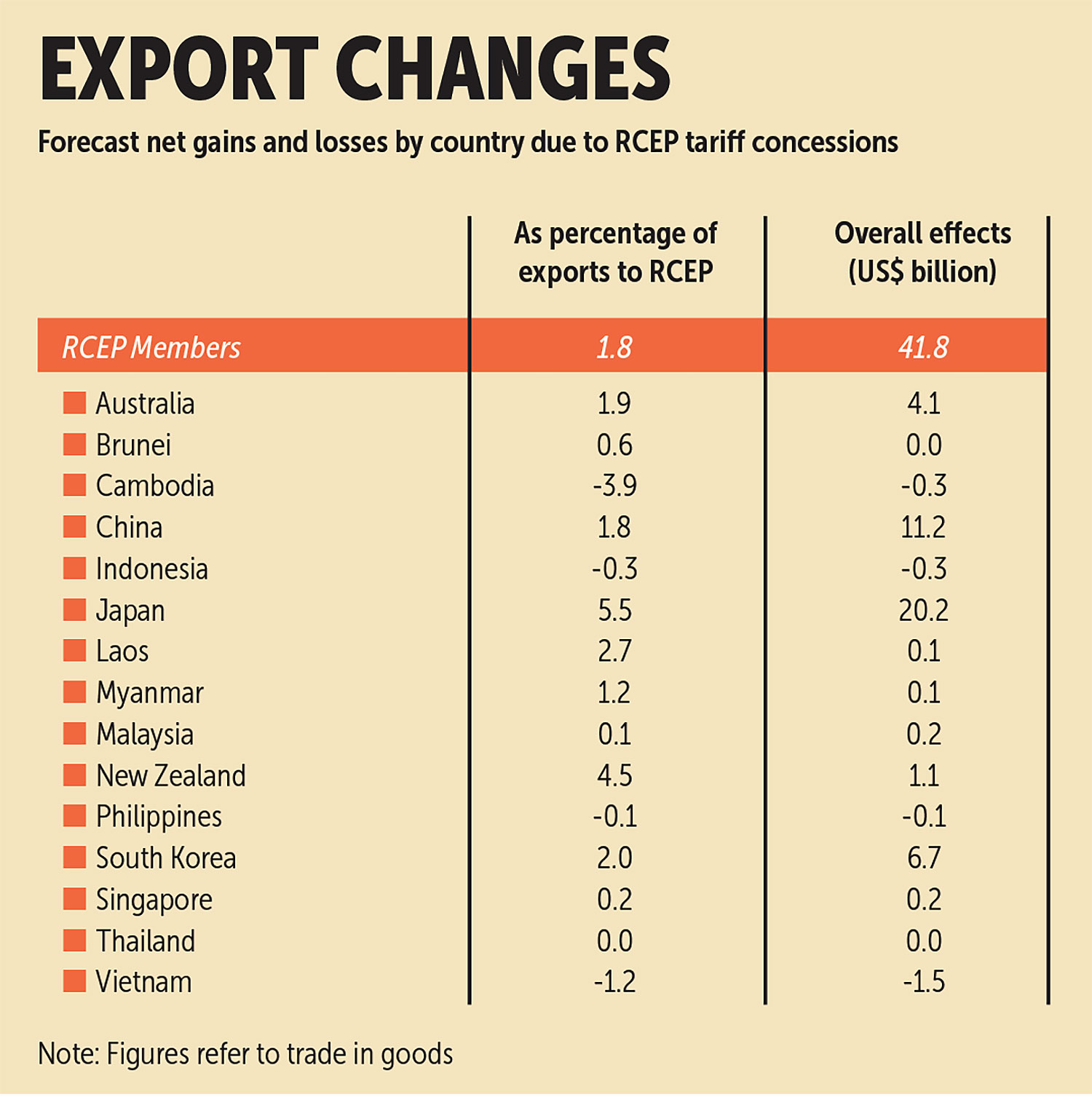 In addition to diverting some trade away from non-member economies, the pact is also expected to spur new trade across some sectors inside the bloc, the Unctad report said.

Among the members, Japan is expected to be the biggest beneficiary, with the dollar value of its exports to other RCEP members expected to climb by $20.2 billion, representing almost a 5.5% increase from 2019. It is followed by China with a forecast net gain of $11.2 billion and South Korea at $6.7 billion.

On the other hand, Vietnam and Indonesia are likely to see adverse effects -- minus $1.5 billion and minus $300 million, respectively -- due to trade diversion within the region. Some of China's imports from Vietnam, for instance, are expected to be replaced by imports from Japan because of greater tariff liberalisation between the region's two largest economies.

The Japanese government projects that the pact will help push up the country's real GDP by 2.7% and add 570,000 jobs. "It will contribute to the economic growth of Japan and the region," Chief Cabinet Secretary Hirokazu Matsuno said in November. "We will play a leading role in building an economic order based on rules and ensuring participating nations abide by the rules."

China also hopes to deepen international cooperation under the RCEP, Premier Li Keqiang was quoted as saying by the state-run Xinhua News Agency. Besides tariff concessions, the agreement standardises rules on investment, intellectual property and e-commerce, among other practices. It also promotes the optimisation of supply chains in the region.

Gao Feng, Chinese commerce ministry spokesperson, told reporters in late December that "all preparations for domestic implementation are in place". The ministry will promptly issue a "guideline for high-quality implementation of the RCEP" to help local governments and businesses make the most of the pact's provisions, seize opportunities created by market opening, and "promote higher quality and deeper regional economic integration in East Asia".

China's tariffs on auto parts and other items from Japan will be reduced in steps, leading to a jump in the ratio of tariff-free Japanese industrial goods headed to China to 86% from just 8% now.

As for imports, Japan will abolish tariffs on 56% of farm products from China, 49% of those from South Korea, and 61% of items from Asean, Australia and New Zealand. 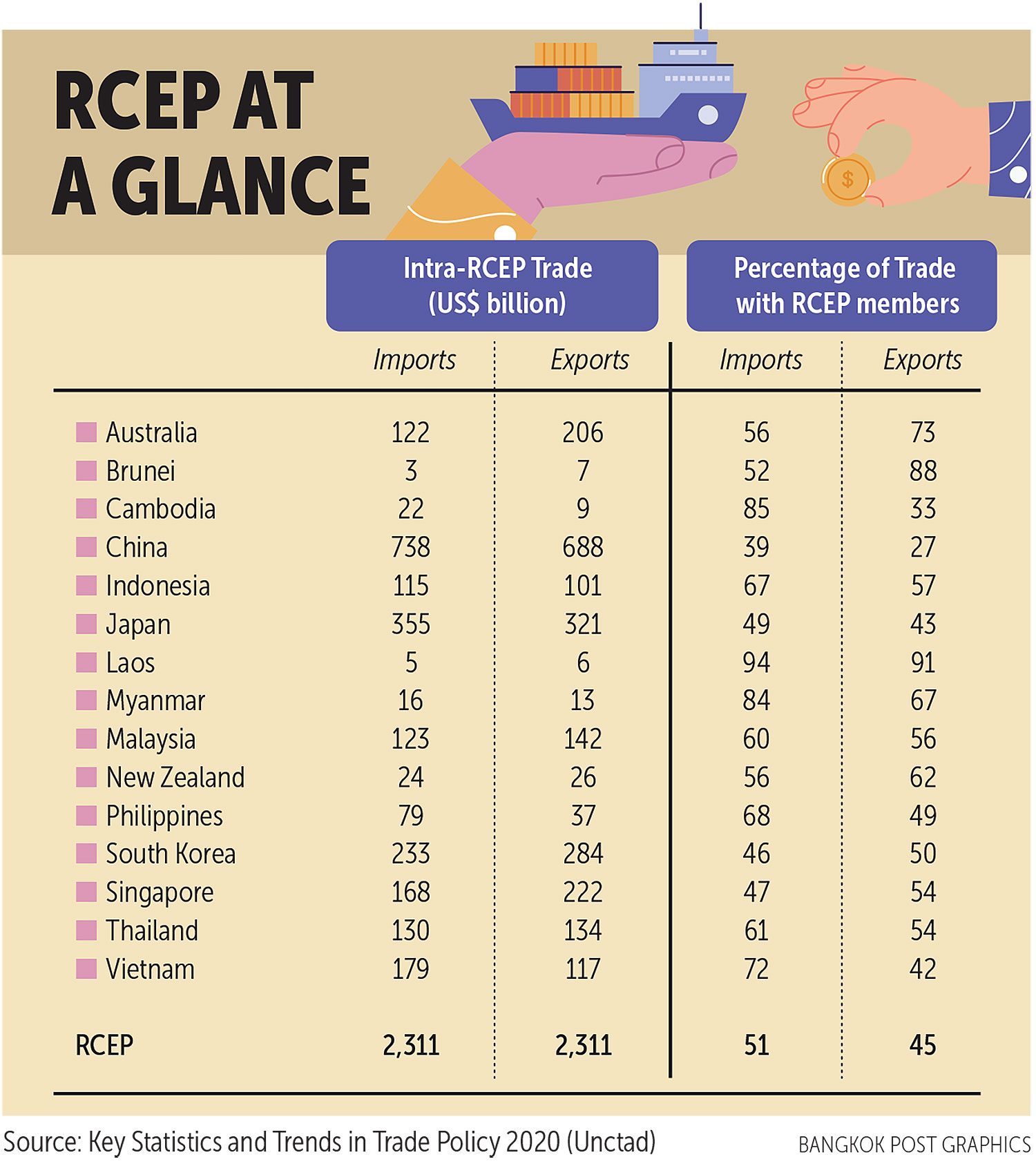 Japan has retained tariffs on five sensitive agricultural product categories -- rice, beef and pork, wheat, dairy, and sugar -- as well as poultry and poultry products. Officials say there will effectively be no negative impact on the politically sensitive domestic agriculture, forestry and fisheries industries.

Another priority for Japan is to persuade India to join the RCEP down the road, as an expanded agreement including India will help dilute China's influence in the region. Delhi was a member of the RCEP drafting committee from its inception in 2011, but in November 2019 it decided to opt out due to fears of the impact on domestic industries. Japan and some other members are holding out hope for India's participation but the South Asian country has not indicated any intention to come back.

Indonesia, meanwhile, is likely to ratify its RCEP membership early this year. Southeast Asia's largest economy has been seeking parliamentary approval to ratify the agreement for months.

Indonesia will likely record a trade deficit with RCEP members in the early stages, but by 2040 the pact could boost Jakarta's trade surplus to $979.3 million, the minister added.

It will also increase the country's GDP growth by 0.07 percentage points and raise exports and imports by $5 billion and $4 billion respectively, he noted, citing a government analysis. Indonesian rubber, steel, chemical, food, wood and mineral product exports are all expected to grow under the deal.

Now that the RCEP is officially in force, one key question is whether its membership will expand and how participating countries will deepen liberalisation. The RCEP will remain open for accession by other economies for 18 months after the date of its entry into force, but there is no deadline for India to return if it wishes. Members are scheduled to review the deal's content every five years.

Hong Kong, for example, has expressed interest. Chief Executive Carrie Lam said in September that the territory was keen to begin formal discussions on accession as soon as the RCEP is ready to take on new partners. Asean also welcomed Hong Kong's interest at an Asean-Hong Kong meeting the same month, saying the Chinese special administrative region is well-placed to add value to the RCEP.

"Should Hong Kong accede to the RCEP, operators of supply chains seeking to tap the RCEP's trade advantages could more readily include Hong Kong businesses in such chains," Locknie Hsu, a professor at Singapore Management University, was quoted as saying by Nikkei Asia.

"While Hong Kong already has FTAs with Asean, China, Australia and New Zealand, it does not presently have individual FTAs with Japan and South Korea. Joining the RCEP could therefore allow Hong Kong to enjoy important new trade and investment benefits with these two countries, and vice versa."

Experts say further liberalisation of trade and investment, and agreements on new areas such as the environment, will be crucial for the RCEP.

"As the US-China confrontation progresses, issues such as human rights, labour rights protection, environmental measures, subsidies to state-owned enterprises, and unfair trade practices in Asia, have surfaced," Toshiki Takahashi, a researcher at the Tokyo-based Institute for International Trade and Investment, wrote on the organisation's website in late December.

"RCEP members," he stressed, "have to adequately address these issues in further negotiations in the future."