Hyperinflation worries stem from a combination of factors including US-China tensions, the global food and energy crises, a potential cryptocurrency bubble and massive ongoing capital injections into the world economy to keep it afloat during the pandemic, he said.

The skyrocketing prices of pork in Thailand and an uptick in headline inflation for four consecutive months underline Mr Suphachai's concerns.

Pressing issues include how hyperinflation is defined, whether could it happen in Thailand, and how it affects overall consumers, domestic interest rates and the recovering economy.

Hyperinflation is a term economists use to describe a period of extremely high inflation, which measures the rate of rising prices for goods and services. Typically an economy must record an inflation rate greater than 50% for at least a month before economists label it hyperinflation.

Ronnarong Phoolpipat, director-general of the Trade Policy and Strategy Office (TPSO), said despite a continual increase in the prices of certain goods and services, the possibility of hyperinflation in Thailand is slim because the economy remains stable and is growing gradually, as reflected in the first nine months of 2021 when it expanded by 1.3%. The economy should see continued growth in 2022, he said.

The inflation rate is the percentage increase or decrease in prices during a specified period, usually a month or a year. The percentage indicates how quickly prices rose or fell during the period.

There are generally two causes of inflation. The most common is demand-pull inflation. This is when demand outpaces supply of goods or services, meaning buyers want the product so much they're willing to pay higher prices for it.

Some people count built-in inflation as a third cause. This factors in people's expectations of future inflation: when prices rise, labour expects an increase in wages to keep up. But higher wages raise the cost of production, which raises prices of goods and services again. When this cause-and-effect cycle continues, it becomes a wage-price spiral.

According to the planning unit of the Commerce Ministry, there are four main types of inflation, categorised by their speed: mild, moderate, galloping and hyperinflation.

Mild inflation is when prices rise 3% a year or less, while moderate inflation is between 3-10% a year, a rate considered harmful to the economy because it heats up economic growth too fast.

Galloping inflation is when prices rise 10% or more, wreaking havoc on the economy.

Hyperinflation is when prices skyrocket more than 50% a month -- the rate considered the most severe, reflecting a dramatic lack of confidence in the public sector while the currency nosedives and prices of goods increase by leaps and bounds.

Often when people anticipate the prices of goods rising, they will stock up. Most hyperinflation occurs in countries where governments have printed a lot of banknotes to pay for their expenses because of insufficient income, according to the planning unit.

Mr Ronnarong gave as an example a country in South America where the main income is from oil exports. When global crude oil prices dropped and income was insufficient to cover rising expenses, the government continued to implement populist policies by printing a large number of banknotes without cutting expenditure, lacking fiscal discipline. This led to hyperinflation, he said.\ 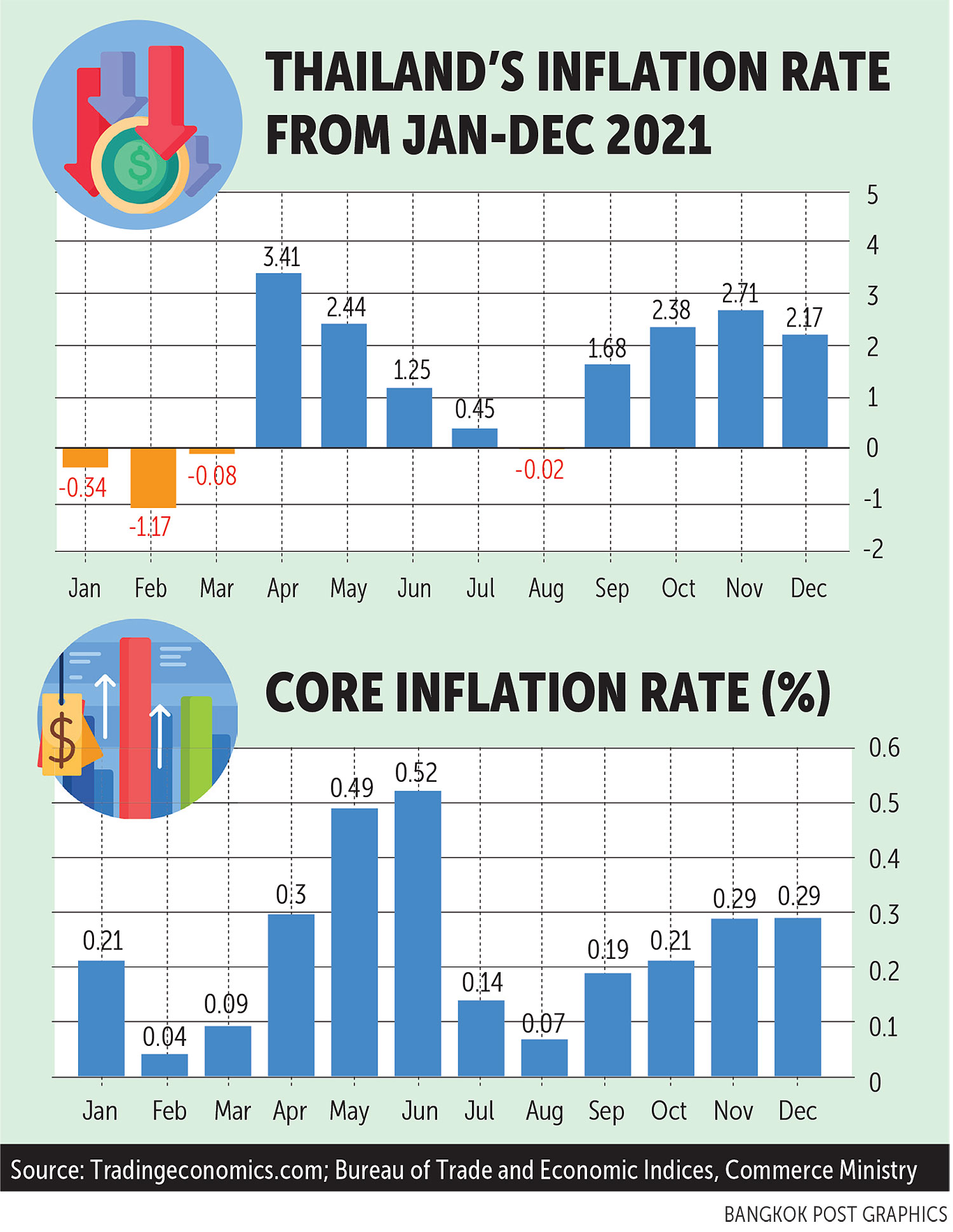 According to Mr Ronnarong, Thailand's monetary and fiscal status remain stable, reflected in the public debt-to-GDP ratio in October 2021 being 58.8%, below the ceiling of 70% under the fiscal sustainability framework.

More importantly, Thailand's international reserves remain relatively high at US$243 billion as of November 2021, while the country's international trade continues to expand, he said.

Mr Ronnarong said the country's inflation rate was at a stable level in 2021, increasing by 1.23% in line with the Bank of Thailand's inflation target range of 1-3%, which it considers an appropriate rate and conducive to economic expansion.

The high inflation rate during these three years was mainly attributed to rising energy prices affecting most economic activities, he said.

"Thailand will definitely not have hyperinflation because the Thai economy remains stable and the Finance Ministry, Commerce Ministry and other agencies have policies and regulatory measures aimed at providing a stable and sustainable economy," Mr Ronnarong said.

Pipat Luengnaruemitchai, chief economist at KKP Research under Kiatnakin Phatra Securities, said hyperinflation would not occur in Thailand because the inflation rate in the country has yet to rise sharply.

"The recovery of both the economy and employment have been fragile, meaning they are unlikely to push the inflation rate rapidly. Thailand's higher inflation is mainly the result of rising food and oil prices," he said.

"However, food and energy prices represent only 20-30% of the country's inflation basket. Higher oil prices are mostly dependent on the global market. Even though the global oil price has been rising and is higher than last year, the increase has not been continuous."

The research house predicts Thailand's inflation surge is going to be short-lived.

However, Mr Pipat said the higher inflation rate would have an outsized impact on low-income earners and some business operators. For low-income earners, food and energy prices represent around 50% of their daily expenses.

Restaurants, food vendors, cooking gas shops, taxi drivers and transport businesses will also feel the pinch from rising inflation because of higher costs, he said. It is difficult to pass these higher costs on to consumers during an economic downturn, said Mr Pipat.

Somprawin Manprasert, chief economist at Bank of Ayudhya, predicted hyperinflation would not occur globally nor domestically, despite rising inflation worldwide. Hyperinflation happens in a few countries because of their internal economic problems, he said.

For the Thai economy, rising inflation is expected to be temporary, said Mr Somprawin. He suggested the government concentrate on promoting stimulus measures to revive the economy rather than focus on inflation curbs.

According to the minutes of the Bank of Thailand's Monetary Policy Committee (MPC) meeting last month released on Jan 5, the committee projected headline inflation would remain within its target, forecast at 1.2%, 1.7% and 1.4% in 2021, 2022 and 2023, respectively.

Inflation would increase temporarily because of supply-side factors, particularly energy prices and global production and freight constraints, which are expected to subside in the second half of 2022, according to the minutes.

A survey conducted in November 2021 found 55% of businesses would not raise prices within the next three months, citing intense competition while purchasing power remained weak given elevated household debt and fragile labour market conditions.

Headline inflation was expected to rise in line with a domestic demand recovery, while inflation expectations remained anchored within the target, said the MPC. Thailand's inflation remains subject to upside risks including higher global inflation and cost pass-throughs, said the minutes.

"The chance of hyperinflation in Thailand is low as it is a food-producing country that does not need to import agricultural products," said Kriengkrai Thiennukul, vice-chairman of the Federation of Thai Industries.

Unlike the US, which saw inflation surge by 6.8% late last year, Thailand's inflation tends to be lower than 2% because living costs, notably most food prices, are not high, he said.

He acknowledged the local pork price skyrocketed to 240 baht a kilogramme, but he believes the government can use a mix of appropriate measures to control its price.

Pork prices were 210-230 baht per kg last Tuesday, up from about 150 baht per kg, prompting Prime Minister Prayut Chan-o-cha to instruct authorities to quickly solve the issue.

In Mr Kriengkrai's view, a key factor determining inflation is the rise in interest rates as a result of the US Federal Reserve's decision to reduce purchases of financial assets under its quantitative easing (QE) programme in response to rising inflation in the US.

"This is an important factor causing fresh worries over higher inflation rates around the world," he said.

The change in QE will affect capital markets around the world and may cause the Bank of Thailand to consider increasing its policy rate from 0.5%, which will eventually increase costs of production, said Mr Kriengkrai.

However, the Joint Standing Committee on Commerce, Industry and Banking (JSCCIB) expects inflation rates to range from 1.2-2% this year.

In fact, a moderate increase in inflation may be good for the economy as very low inflation reflects sluggish economic activities, said Mr Kriengkrai. The inflation rate predicted by JSCCIB is "suitable" for economic conditions, he said.

Thanavath Phonvichai, president of the University of the Thai Chamber of Commerce, agrees that hyperinflation prospects are unlikely in Thailand, although food prices have been rising and global supply lines and container shortages are stressing producers.

Mr Thanavath forecast Thailand's inflation rate at 1.5-2% in 2022, with inflationary pressure not yet severe, although rates in certain months may reach 3%.

"The global and Thai economies have yet to fully recover. If the economy continues to recover, the Bank of Thailand may raise its policy rate by 25 basis points in the late third quarter or the fourth quarter," he said.

According to Mr Thanavath, it remains a buyer's market in Thailand as manufacturers have yet to raise prices too much because consumer purchasing power remains relatively weak.

"In order to curb an excessive rise in prices, the government can facilitate and support business operators obtaining more soft loans to increase their liquidity," he said.

Energy analysts also played down worries over hyperinflation caused by the global oil price surge as the price is believed to have already peaked.

Fuels, especially oil and gas used in the industrial and transport sectors, are an essential factor determining operation costs and the prices of goods and services, but the increase in energy prices will not escalate and plunge Thailand into a period of extremely high inflation, said Chaiwat Kovavisarach, president and chief executive of Bangchak Corporation Plc.

In the third quarter last year, global oil prices soared rapidly after the easing of lockdown measures and the reopening of many countries in Europe to jump-start their economies.

These moves led to higher energy demand, though oil producers did not largely increase their supply, said Mr Chaiwat.

The bottleneck of oil supply looks set to calm down this year, he said.