Headline inflation to remain within target

The Bank of Thailand is concerned with higher prices for living costs, but not in terms of overall price stability, says the central bank governor.

The bank believes higher prices will not have an adverse impact on the macro economy and headline inflation will remain within its target, said central bank governor Sethaput Suthiwartnarueput.

Yet soaring energy and food prices could add to the cost of living amid a slow economic recovery, he said. 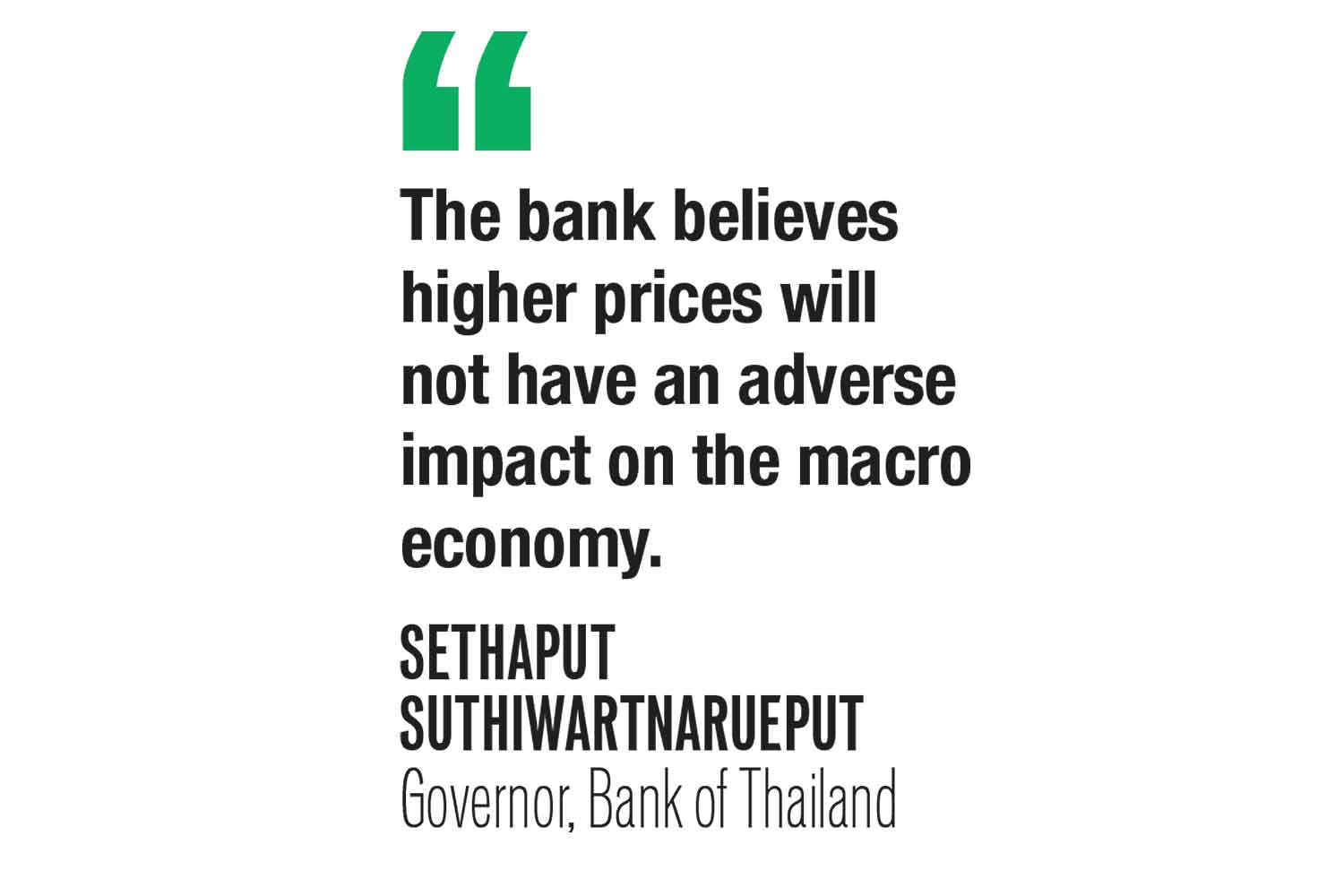 He said now is not the right time to raise the minimum wage because the labour market is still fragile, despite people's declining income and higher costs of living.

There are around 700,000 unemployed workers with which the central bank is not too concerned, he said. Its main concern is with underemployed labourers, which exceed 2 million.

The bank needs to ensure the economic recovery momentum as there are several risks and uncertainties, said Mr Sethaput.

In particular, the Omicron variant is expected to impact the economy the first half of this year.

Given this negative factor, the central bank slashed its foreign tourist arrival forecast for 2022 from 6 million to 5.6 million.

The bank also downgraded its 2022 GDP growth forecast from 3.9% to 3.4%, assuming the Omicron variant would damage the figure.

The central bank maintains its outlook that the Thai economy should return to 2019 levels in the first quarter of 2023, while GDP growth for next year is projected to be 4.7%.

The governor said the Covid-19 outbreak is a key risk factor for both the global and Thai economies, as new variants could emerge.

As a result, the central bank prepared measures to ensure continued economic expansion and to address debt and non-performing loans (NPLs), he said.

Mr Sethaput said the central bank has been monitoring the progress of its long-term debt restructuring measures implemented from September last year as well as debt consolidation measures, which offer more flexibility for both financial institutions and borrowers.

In addition, the central bank will announce new regulations for the formation of a joint venture asset management company within this month, he said.

Bad debt in the banking industry is expected to gradually increase, in line with a weak economy and decreasing income during the pandemic.

Mr Sethaput said despite the trend of higher NPLs, the central bank does not think this will lead to a hike in bad loans.

He said the bank is preparing a financial landscape consultation paper and plans to release the paper on Feb 2.

The paper calls for the central bank to open more financial and banking business operations.

The paper is expected to detail issues surrounding digital assets, a virtual bank and fintech, in line with the current digital age, said Mr Sethaput.

However, the bank plans to set guard rails to control risks for the new innovative financial services.

The Bank of Thailand has a clear stance that it does not support cryptocurrency as a means of payment, but will allow it for investment under the Securities and Exchange Commission.