Hoping for a return to normalcy
Business

Hoping for a return to normalcy

While the WHO urges caution, the public health sector is eager to turn the page, but politics is clouding the outlook

People use the skytrain in Bangkok. The World Health Organization says it may be too soon to label Covid-19 as endemic this year. (Photo: Arnun Chonmahatrakool)

The first local transmission of Omicron confirmed in Thailand on Dec 20 last year prompted the government to abruptly suspend new registrations for quarantine-free entry into the country and raise the Covid-19 alert to level 4 amid fears over the highly contagious variant.

The Public Health Ministry in late December predicted the worst-case scenario for Thailand would be a surge in cases to 30,000 per day, surpassing the peak for the Delta variant of more than 23,000 infections last year.

However, new daily Covid-19 infections lingered below 10,000 for most of January, less than the best-case scenario from the ministry.

The government then announced a plan to loosen all curbs and declare an ambitious goal to make Covid-19 endemic based on its own academically acceptable criteria by the end of this year.

The World Health Organization (WHO) stated it is too early to play down the Covid-19 threat by tagging it as endemic this year, but the Department of Disease Control insisted different countries have varying roadmaps.

The department said Thailand is ahead of WHO guidelines and other countries in certain respects.

Playing in the background of the endemic debate is yet another political brouhaha following the expulsion of 21 MPs from the ruling camp -- the Palang Pracharath Party.

The stability of the coalition government is on the line as it now has 254 seats, which could be an obstacle when it needs to command a majority in the House.

Even though the government insists there will be no dissolution, wavering political confidence remains another factor to keep an eye on as this situation could prevent the country from reaping the benefit from improvements in the virus situation in the months ahead. 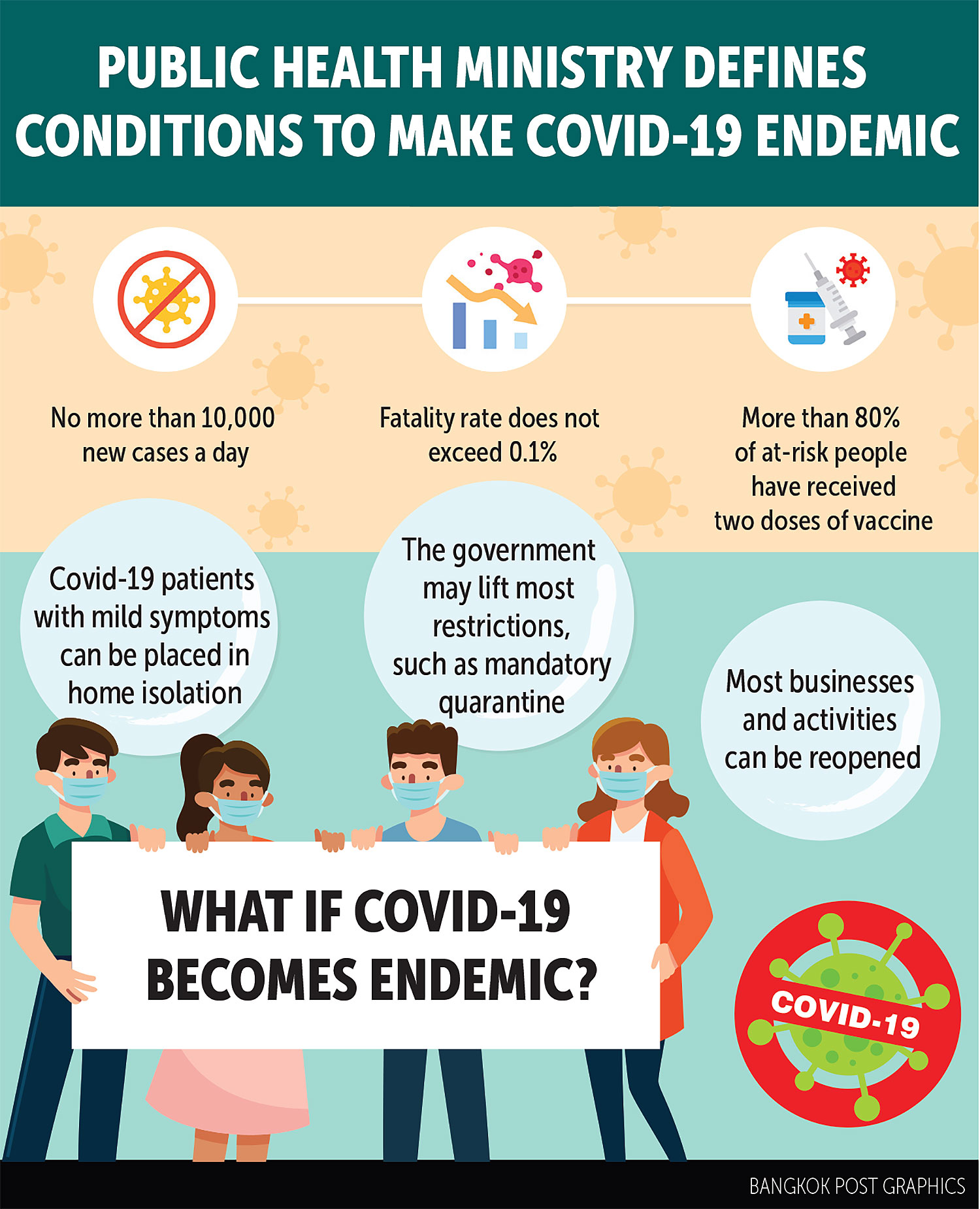 If the government is confident enough to declare Covid-19 endemic by the end of this year, most or all travel restrictions must be lifted because it means the pandemic is under control, said Association of Thai Travel Agents president Sisdivachr Cheewarattanaporn.

He said entry registrations on the Thailand Pass system should be terminated to pave the way for normal entry regulations, as used prior to the pandemic.

Foreigners should be able to apply for visas or those from nations granted visa exemptions must be allowed to enter the country without encountering any hassles, said Mr Sisdivachr.

However, as health safety measures remain necessary, some requirements such as RT-PCR tests or vaccine certificates are acceptable, he said.

"We don't have suggestions on disease control as this is up to the experts," he said.

"But we hope to see the entry process simplified to nearly pre-Covid rules if by the end of this year Covid-19 is recognised as a kind of seasonal flu."

Mr Sisdivachr said the Test & Go scheme, which has minimum requirements for travellers, is a good effort.

Yet problems are still regularly occurring with the scheme, and the tourism industry has not seen a significant recovery, he said. 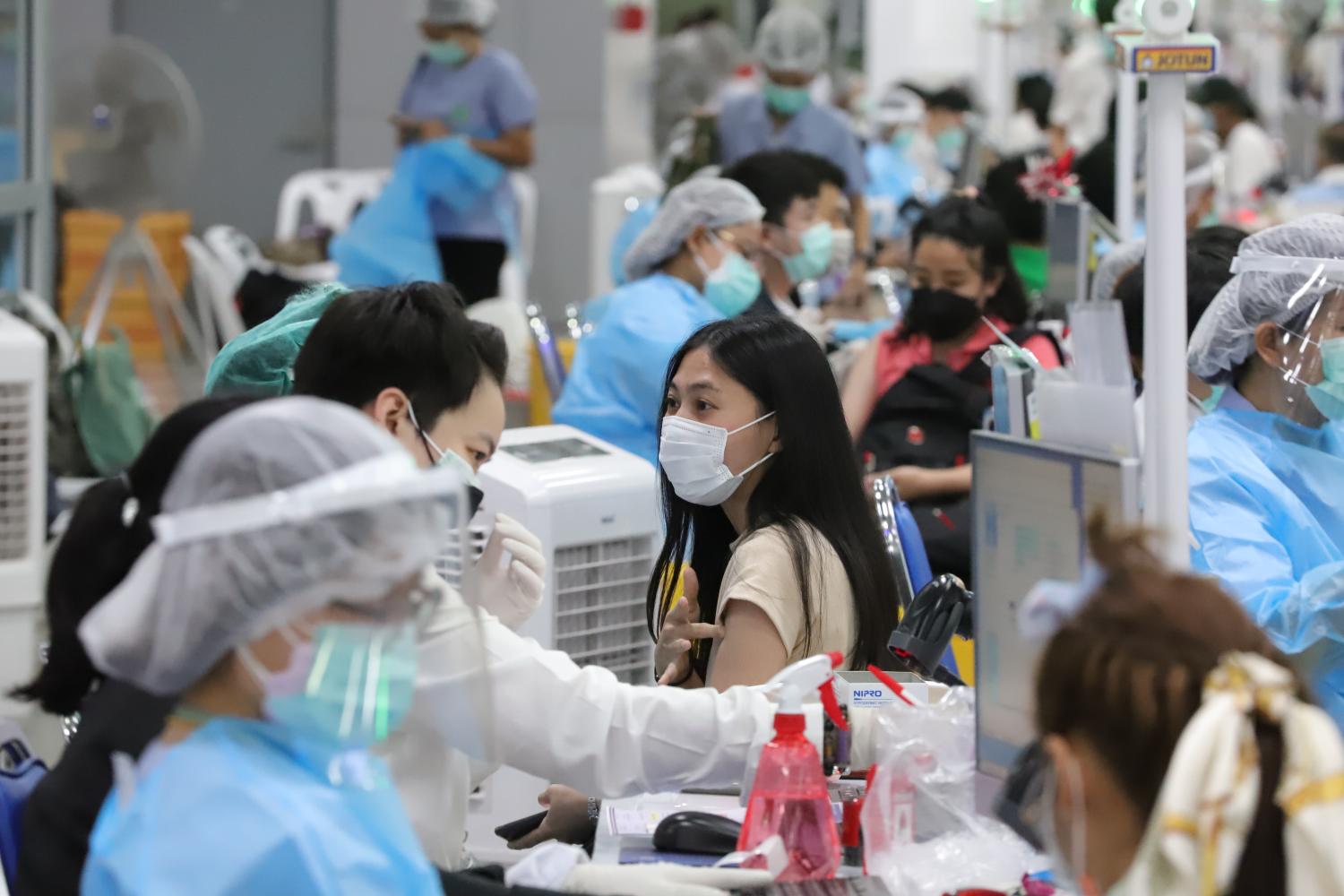 Bang Sue Grand Station in Bangkok has been transformed into a vaccination centre where people can receive Covid-19 jabs. Pornprom Satrabhaya

The recent political turbulence in the Palang Pracharath Party made an impression upon Supant Mongkolsuthree, chairman of the Federation of Thai Industries (FTI), with a repeat of the familiar instability in Thai politics which has been haunting the country's political and economic development for decades.

The expulsion of Thamanat Prompow, the former deputy agriculture and cooperatives minister, and 20 MPs under his wing from the ruling party raises questions regarding the government's stability, similar to previous situations. However, there is a distinct difference this time, said Mr Supant.

"The business sector is not confident the government can smoothly continue its work at a time when the country needs an enormous effort to drive an economy ravaged by Covid-19," he said.

The conflict inside the party has left the coalition government with a slim majority of MP seats, which can pose problems when the government wants some legislation to be passed by the House.

It is the latest event in a series of political conflicts that threatens to deal a blow to the government while it struggles to ease the impact of the pandemic.

Concerns over political problems, including anti-government protests, were reflected in a FTI survey of 1,395 enterprises in 45 industries in August, which was conducted to calculate the Thailand Industry Sentiment Index (TISI).

The prolonged Covid-19 outbreak and the government's decision to impose strict lockdown measures, including a nighttime curfew, in 29 provinces in August were the major causes behind a drop in the TISI to 76.8 points, the lowest level in 16 months.

Though political conflicts were ranked third on a list of worries raised by respondents during the survey, following the economic downturn and Covid-19 outbreak, the squabbles remain a risk factor in the minds of manufacturers.

The Prayut Chan-o-cha administration has been trapped in an "instability mode" for a long time because of many coalition parties, leading to inconsistency in implementing some policies, said Mr Supant.

"The economy can move forward, but it seems to proceed unsteadily," he said.

Luckily, Mr Supant said, foreign investors have a greater understanding of Thai politics. They have seen coups, House dissolution and resignations of prime ministers before, but continue to make investments in Thailand. 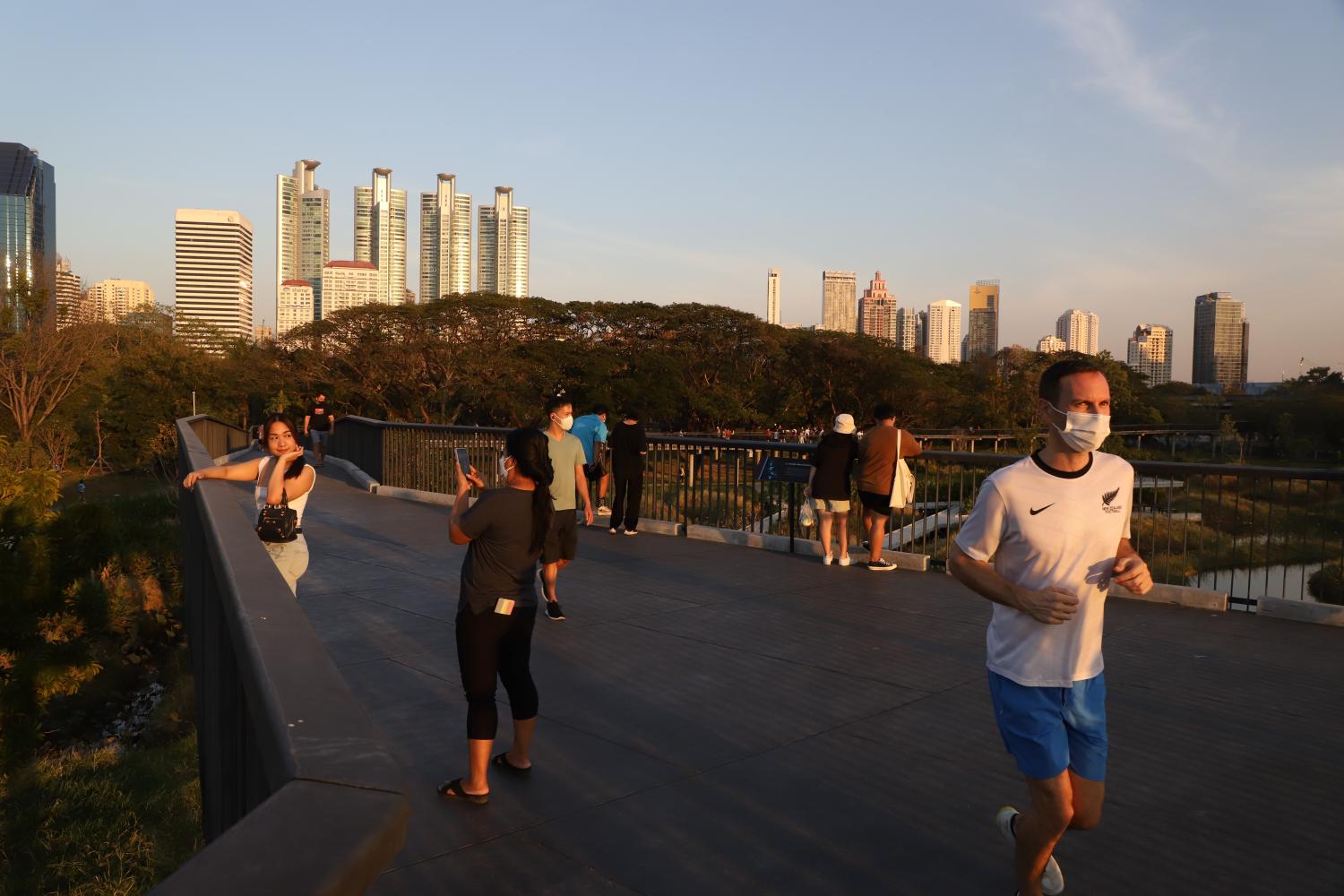 Sanan Angubolkul, chairman of the Thai Chamber of Commerce, said the current economic situation including people's income prospects, higher prices of consumer goods, rising oil prices, the Covid-19 pandemic, as well as political stability are being monitored by the private sector.

"The country's economic recovery is the most important issue right now," he said.

"No matter whether the government changes, the ongoing efforts and measures to address the Covid-19 outbreaks, economic stimulus measures and employment need to be continued."

According to Mr Sanan, if the country can effectively contain the Omicron variant quickly and continue to roll out fast and accurate measures to stimulate the economy, the economy should recover as quickly as in many other countries.

Watchai Vilailuck, executive vice-chairman of SET-listed tech and ICT solution provider Samart Corporation, has accepted that politics can affect all businesses in the current climate.

"I have no idea whether or when a general election would be held, even the planned Bangkok gubernatorial election," he said.

The most critical factor for the country's economy is political volatility, said Mr Watchai.

"All enterprises have no choice as political movements are out of their control, but enterprises must adapt to the situation and diversify their sources of income," he said.

The country's economy faces various risks, such as the pandemic, economic volatility, political uncertainty and a decline in purchasing power, said Mr Watchai. 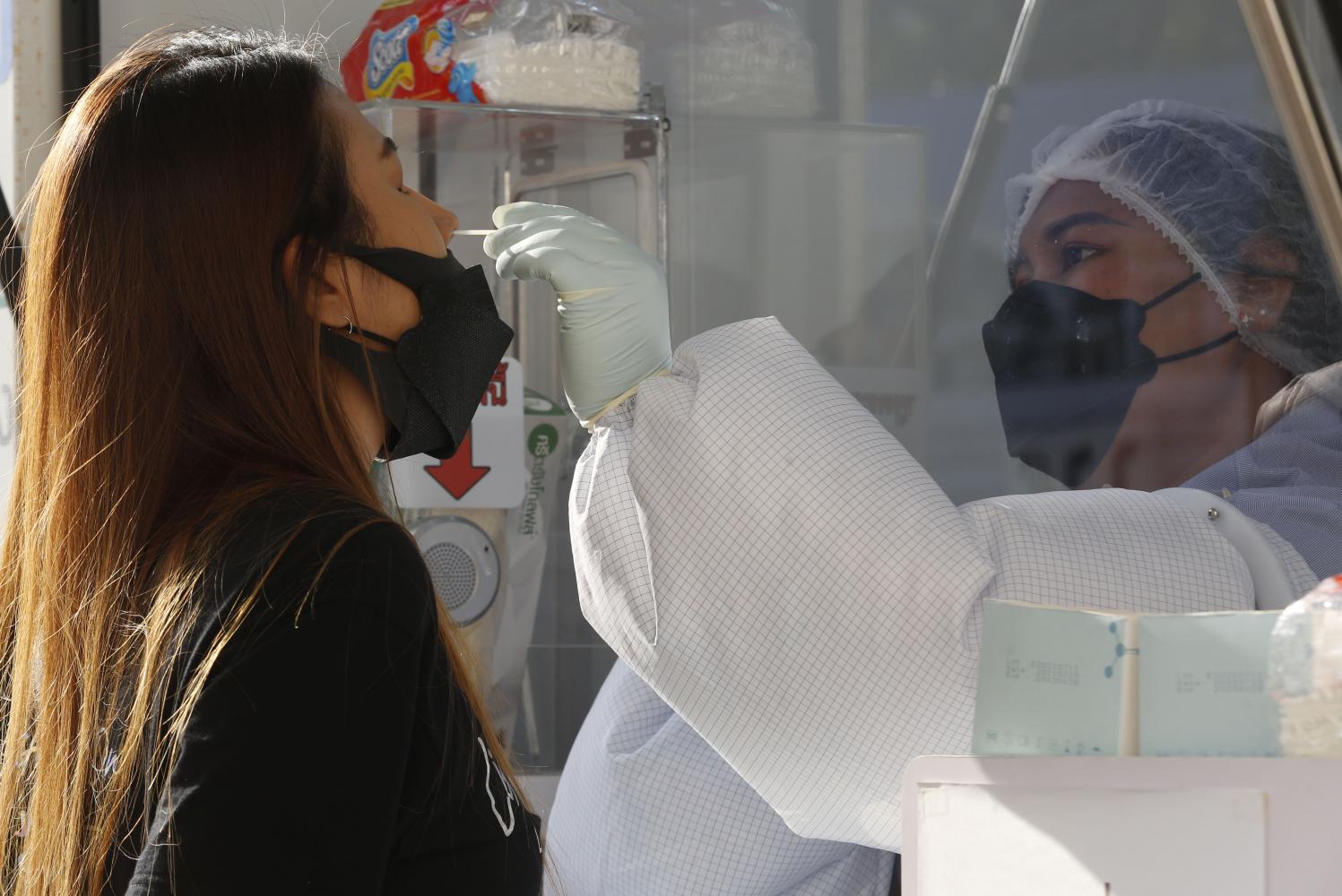 Boonkiet Chokwatana, chairman of I.C.C. International Plc, the fashion and beauty marketing arm of Saha Group, said the country's economic problems do not stem from political instability, but rather the slow pace of infrastructure development.

"The Thai government still lacks initiatives to develop new things and remains relatively slow in developing the country's promising infrastructure projects, which is a top priority for foreign investors when they are deciding whether to invest here," Mr Boonkiet said.

He said having proper infrastructure would help the country's economy grow as rapidly as China's economy has developed.

"Political risks and instabilities affect companies that do business related to politics, such as construction," he said.

Chamnan Srisawat, president of the Tourism Council of Thailand, said the key factor to reboot the domestic market is dependent on health and safety more than political confidence.

This means any government, no matter how power may have shifted, must continue with appropriate stimulus and lend support to help the private sector maintain health and safety standards, said Mr Chamnan.

For the international arena, the crucial factor to revive the market is each country's border policies, as many nations still have broadly divergent stances, he said. 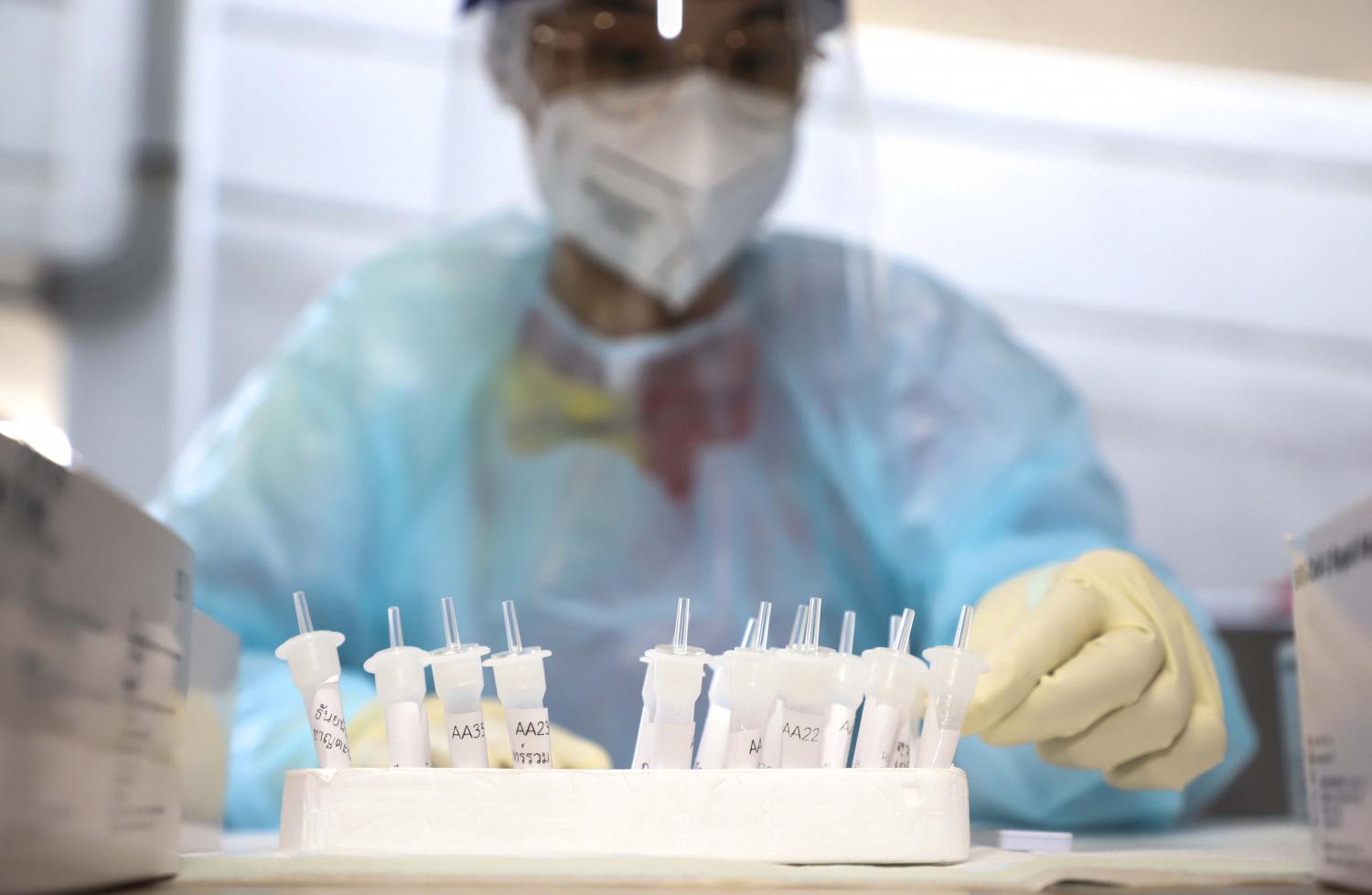 An official prepares swab samples for antigen testing at the Government Complex on Chaeng Watthana Road. The tests are free of charge for up to 1,000 people a day, as daily Covid-19 cases are surging due to the emergence of the Omicron variant. Pattarapong Chatpattarasill 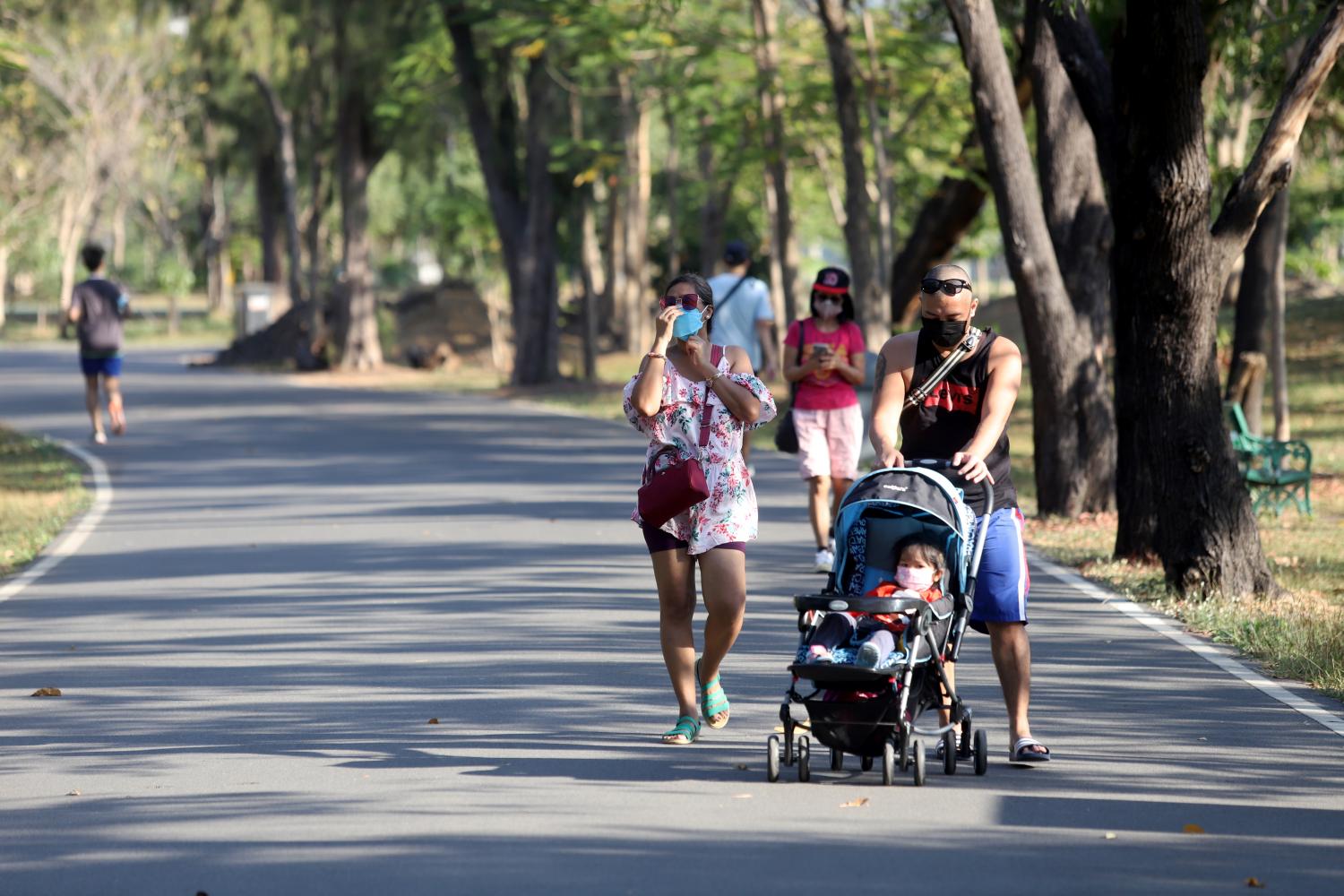 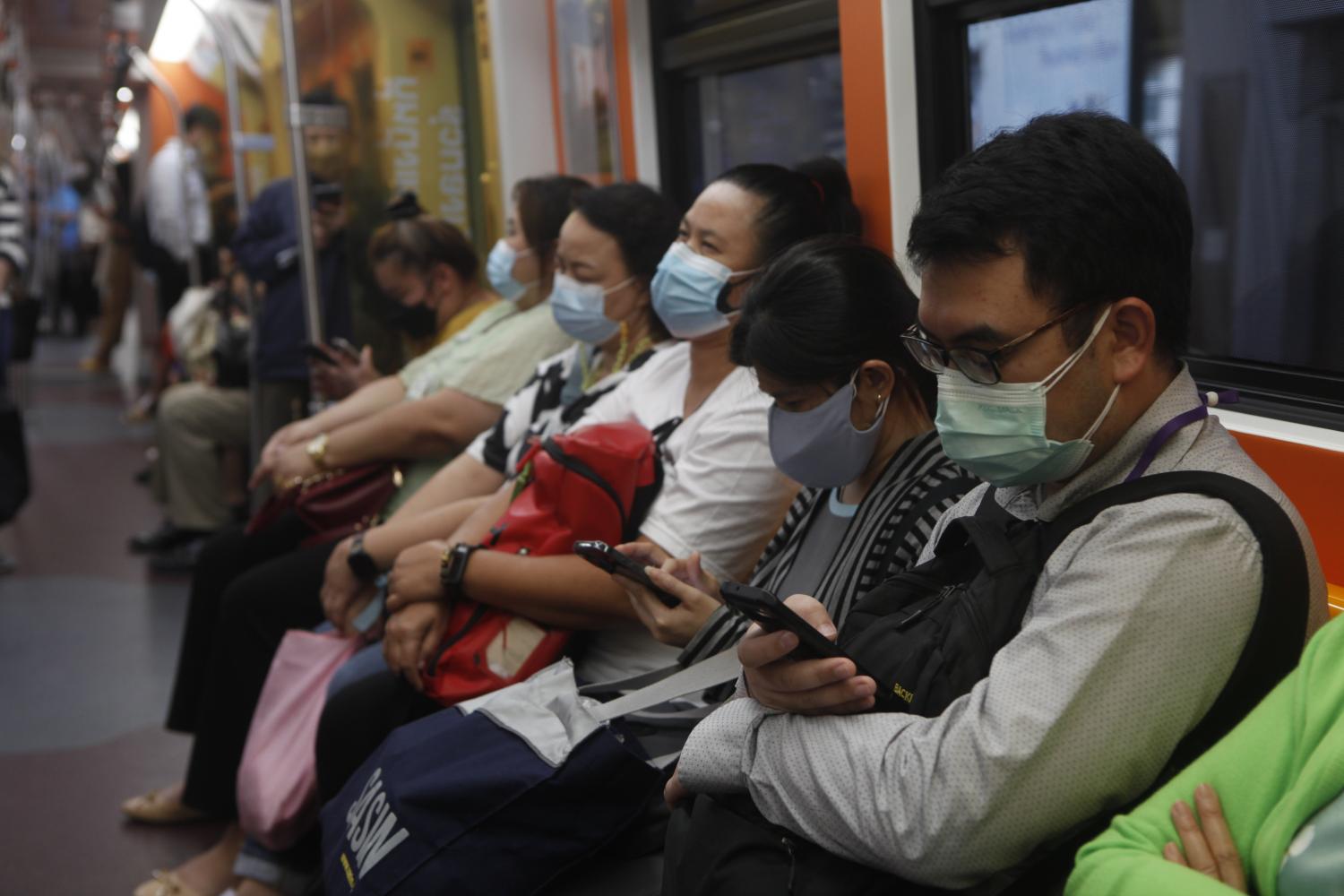 People wear face masks while commuting via the BTS skytrain in Bangkok. World Health Organization (WHO) clearly stated that it may be too early to play down Covid-19 threat by tagging it as an endemic this year. Nutthawat Wicheanbut 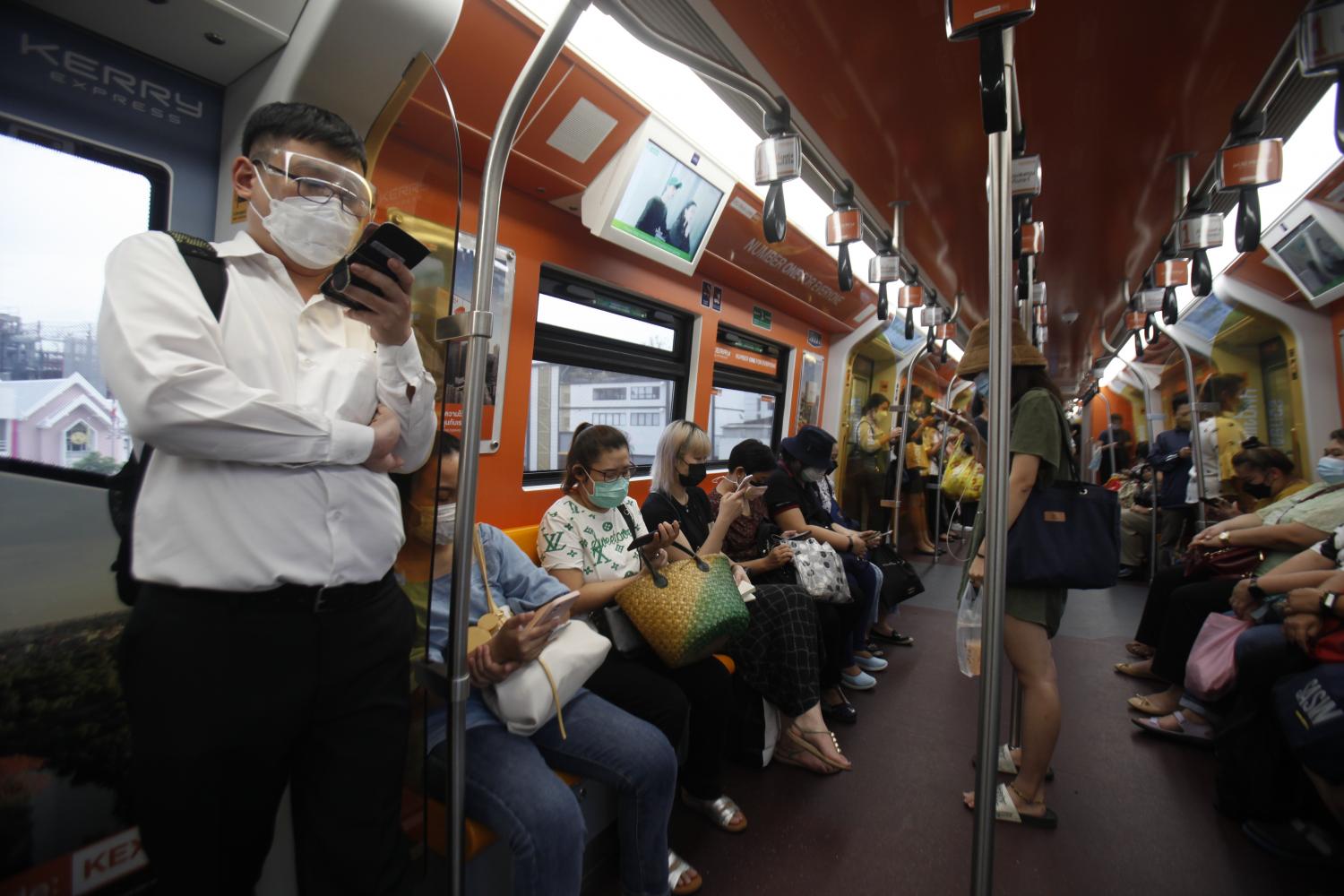