Scheme for both drivers, producers

The cabinet approved on Tuesday a package of incentives including tax cuts and subsidies to promote electric vehicle (EV) consumption and production between 2022-2023.

The subsidies range from 70,000 baht to 150,000 baht depending on the type and model of vehicle, while there will be lower excise tax and import duties on completely knocked down and completely built up units.

According to government spokesman Thanakorn Wangboonkongchana, the cabinet approved measures to promote domestic manufacturing of EVs, including exemption of import duties on significant electrical parts between 2022-2025.

"The incentives offered for the first two years during 2022-2023 covering imported cars and motorcycles aim to stimulate a wider and faster use of electric vehicles in the country," said Mr Thanakorn.

"From 2024 to 2025, the government will focus primarily on the promotion of the use of domestically manufactured EVs."

The government wants Thailand to become a global hub for EV and parts production, as well as use of zero-emission vehicles of all types, he said.

The country wants manufacture of domestic EVs to account for at least 30% of total domestic production in 2030, or 725,000 units per year.

According to Mr Thanakorn, the cabinet also approved 3 billion baht from the central budget in fiscal 2022 to fund the subsidy programmes.

In addition, the cabinet agreed in principle to provide a budget of 40 billion baht between fiscal 2023-2025 to promote EV consumption. 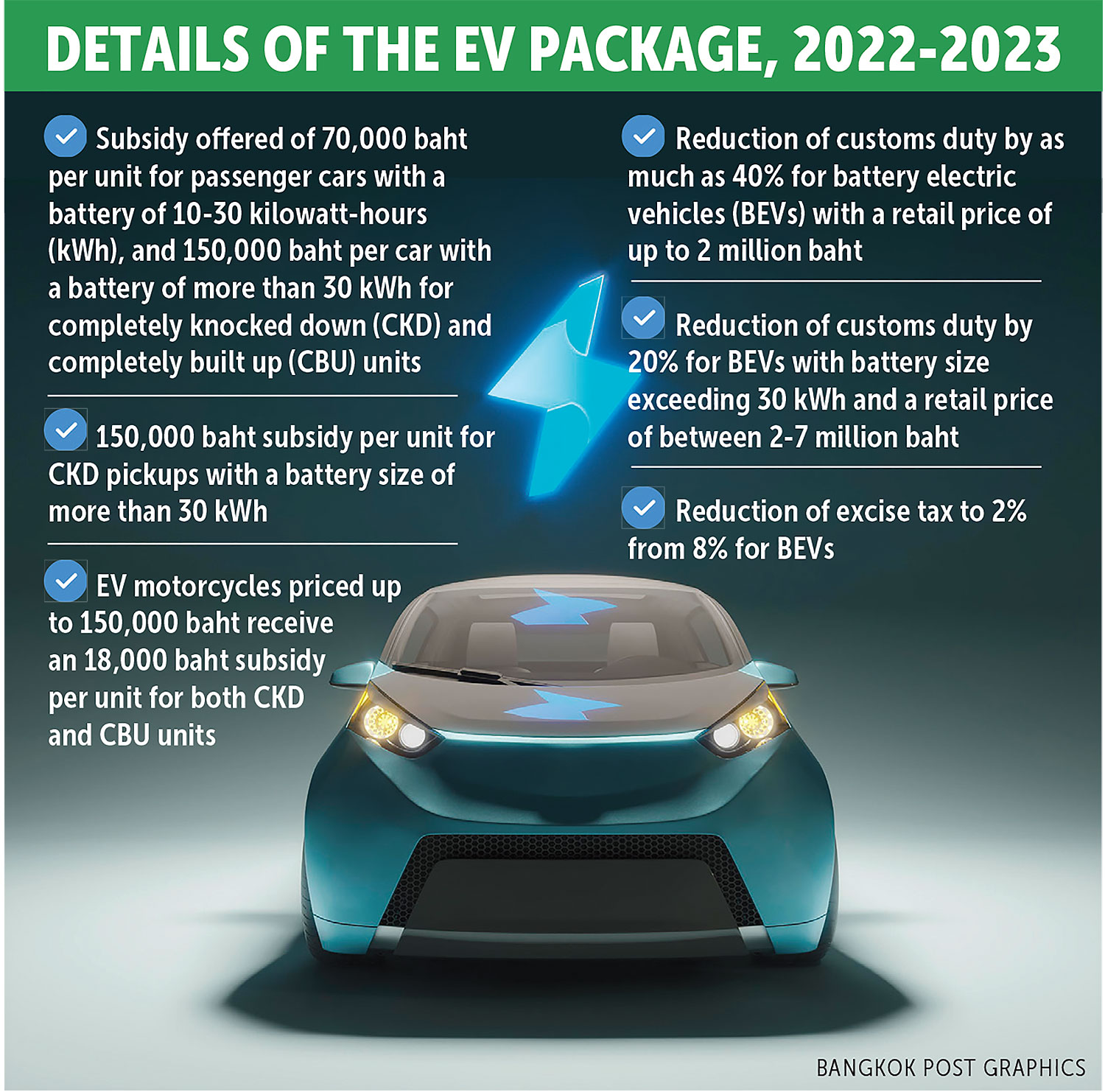 The Electric Vehicle Association of Thailand (EVAT) welcomed the government's EV incentive package, saying it was a good start to develop the fledgling industry in Thailand, benefiting both automakers and buyers.

"EVAT is happy with the government's move to promote the EV industry through this package," he said.

"We expect the industry to leapfrog from now on."

The package is designed to ensure global automakers in Thailand feel they can share equal benefits from the state's EV promotion, said Mr Thanakorn.

Previously many car companies were concerned Chinese automakers would hoard most advantages in the auto industry because China and Thailand signed a free trade agreement that grants zero import duties on general car components from China.

Japan also enjoys a 20% import duty reduction under the Japan-Thailand Economic Partnership Agreement, while South Korea gets a 40% reduction.

"The launch of the EV incentive package will bring good feelings to all car manufacturers as everyone enjoys the same advantages from the package," said Mr Krisda.

According to EVAT, Thailand registered 5,781 new EVs for use last year, including 3,673 electric motorcycles.

Car and motorcycle manufacturers announced plans to produce and distribute EVs in line with the National EV Policy Committee's announcement in March last year of a goal to have EVs constitute 50% of locally made vehicles by 2030, part of an ambitious plan to make Thailand a regional EV production hub.

Banks strike back at cybercriminals