The Commerce Ministry expects headline inflation in March to stay at a high level, driven by a rise in energy prices after the cost of fuel and electricity accelerated in February at the fastest pace since 2008.

Ronnarong Phoolpipat, director-general of the Trade Policy and Strategy Office, said yesterday the prospects of higher inflation are likely to increase prices this month, particularly for consumer goods including prepared food, seasonings and condiments.

Another factor is the low inflation base at the beginning of 2021, he said.

Mr Ronnarong said falling prices of certain items such as pork, fresh vegetables and fruit, as well as the government's measures to lower the cost of living, should keep the inflation rate within an appropriate range. 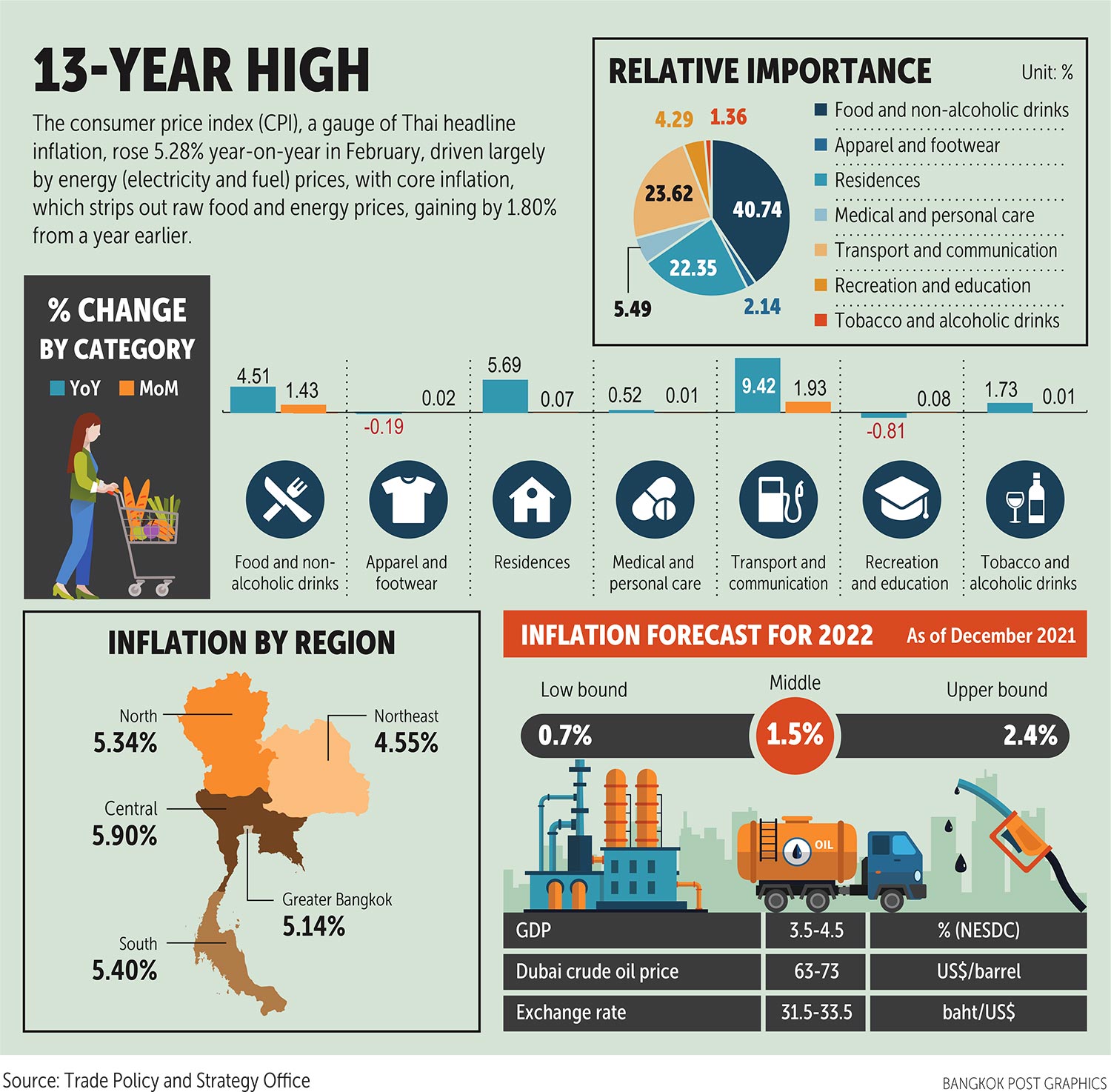 "Inflation this year is likely to be volatile and the projection will be revised sometime this month," he said.

The Commerce Ministry reported yesterday headline inflation, gauged by the consumer price index (CPI), surged 5.28% year-on-year in February. It was the sixth straight month of year-on-year increases, which were recorded at 3.23% in January of this year, 2.17% in December, 2.71% in November, 2.38% in October, and 1.68% in September, following a 0.02% decrease in August 2021.

The inflation was attributed to prices for energy, food, non-alcoholic beverages, and higher costs for production and materials.

The high level of inflation also resulted from the low base in February 2021, said Mr Ronnarong.

On a month-on-month basis, consumer prices in February increased 1.06% from January, decelerating from a 1.13% increase the previous month following lower prices for pork, fresh vegetables and fruit. The prices for chicken, eggs and fuel increased at lower rates than in January, following ministry measures and the excise tax cut on diesel.

Core CPI, which excludes raw food and energy prices, rose 1.8% year-on-year in February, accelerating from 0.52% in January, and was up 1.2% month-on-month from January.

For the first two months of this year, core inflation rose 1.16% from the same period last year.

Thanavath Phonvichai, president of the University of the Thai Chamber of Commerce, said inflation has become one of the biggest economic worries now that oil prices are likely to increase the next three months to an average of US$100-120 per barrel.

"Inflation is expected to stay at 5% to 6% in the first half of this year based on the impact of the Russia-Ukraine crisis and higher food, feed meal and transport costs," he said.

"Consumers will be affected by the higher cost of living and become more cautious with their spending. This will aggravate the economy, which is already suffering from Covid-19 outbreaks. The Thai economy will not recover easily this year."