Will that be cash … or not?
Business

Will that be cash … or not?

Almost 9 out of 10 Thais are going cashless, according to Visa study

A customer makes a payment with a smartphone using QR code technology.

Nearly nine in 10 Thais are now using some form of cashless payment in their daily lives, according to the latest Visa Consumer Payment Attitudes study. Among those who have been making the switch, 43% said they lasted for more than a week without using cash, the global payments company said.

For those who have never tried going cashless, 79% said they were confident they could get by without cash for the next 24 hours, an increase of 11 percentage points compared with the previous edition of the study, the study found.

"With greater hindsight into the last version of the study, we see Thai consumers' evolving behaviours and more favourable attitudes towards digital payments were, in part, driven out of necessity," said Suripong Tantiyanon, country manager of Visa Thailand, referring to the measures imposed to reduce the risk or coronavirus transmission.

"However, based on this year's findings and our dialogue with stakeholders across various industries, we're seeing more evidence that the changes have become more habitual. The shift away from cash is becoming increasingly permanent." 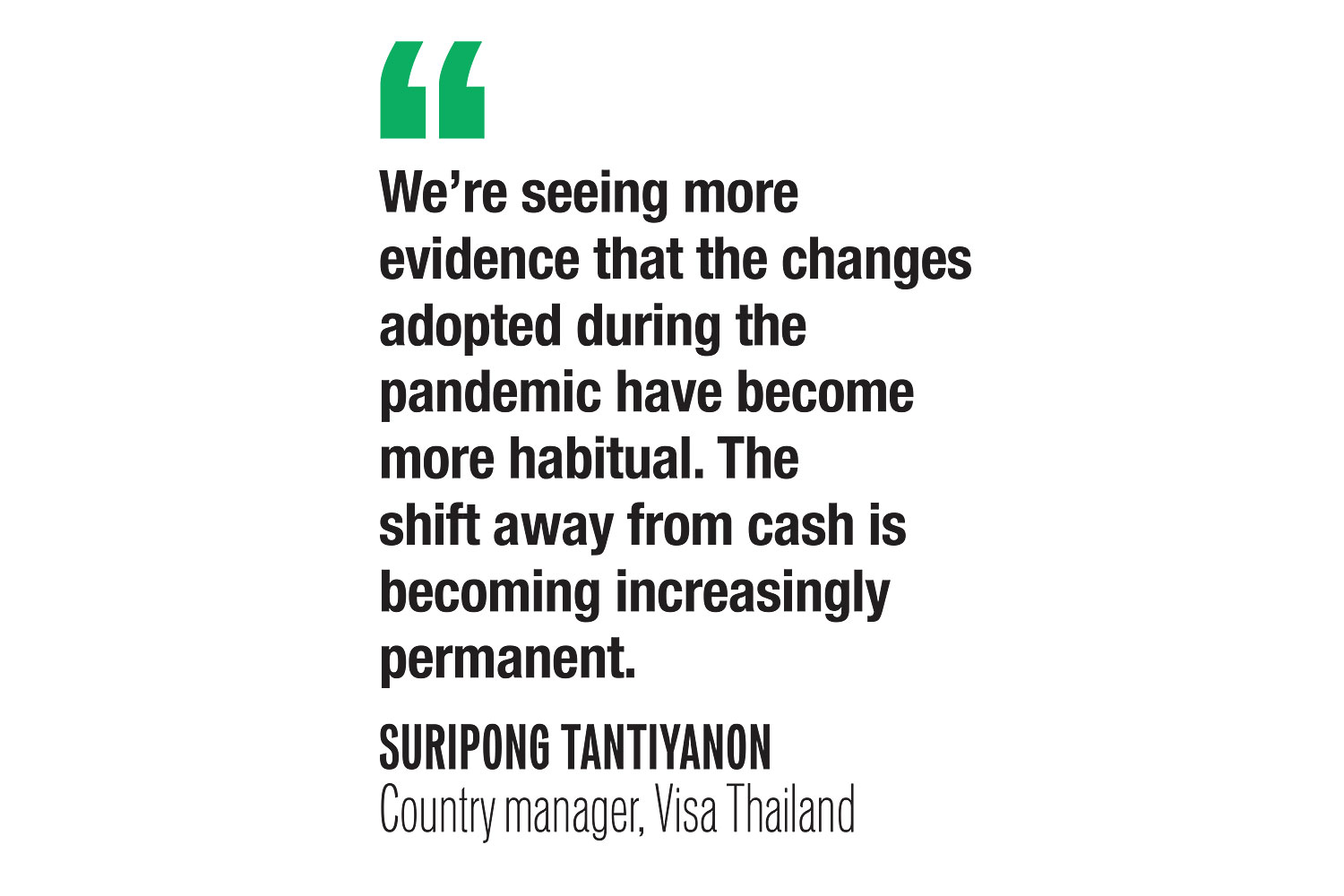 According to the study, more than three in five (61%) of Thai consumers said they were carrying less cash than in the previous year.

The top three reasons for the decrease were that they are using more digital payments (77%), are concerned about the potential of infection from handling cash (54%), and they are finding more merchant locations accepting digital payments (45%).

The findings were based on a survey of 1,000 Thai consumers, part of a broader study involving 6,520 people in seven Asean markets -- Cambodia, Indonesia, Malaysia, the Philippines, Singapore, Thailand and Vietnam -- conducted in October 2021.

While debit and credit cards have been mainstream cashless options for some time, e-wallets and contactless payments are rapidly gaining acceptance in some key Southeast Asian markets, according to Visa.

Contactless payments, which enable consumers to pay simply by tapping their card or smartphone on a terminal, provide a faster, safer and more convenient payment experience.

Contactless payments are growing in popularity in Thailand as a way to pay for goods and services at physical retailers and for transit. Bangkok commuters can now use their contactless credit cards to pay for fares on MRT Blue and Purple lines, in addition to bus, electric boat services and the tollway.

According to the study, nearly nine in 10 of respondents (87%) are aware of contactless cards. Among those who do not currently use them, 86% said they were interested in this type of payment.

Thai consumers are already looking to a future payments landscape. Based on the findings, 69% of respondents said they were interested in investing in cryptocurrency if it were available in the market. Additionally, four in five (85%) Thais are interested in paying with cryptocurrency, driven by Generation Z (57%).

"Visa continuously strives to create ways for everyone, everywhere to participate in the digital economy," said Mr Suripong. "We hope the findings from our latest study will help recovering and thriving businesses in Thailand, both large and small, unlock new commerce opportunities."