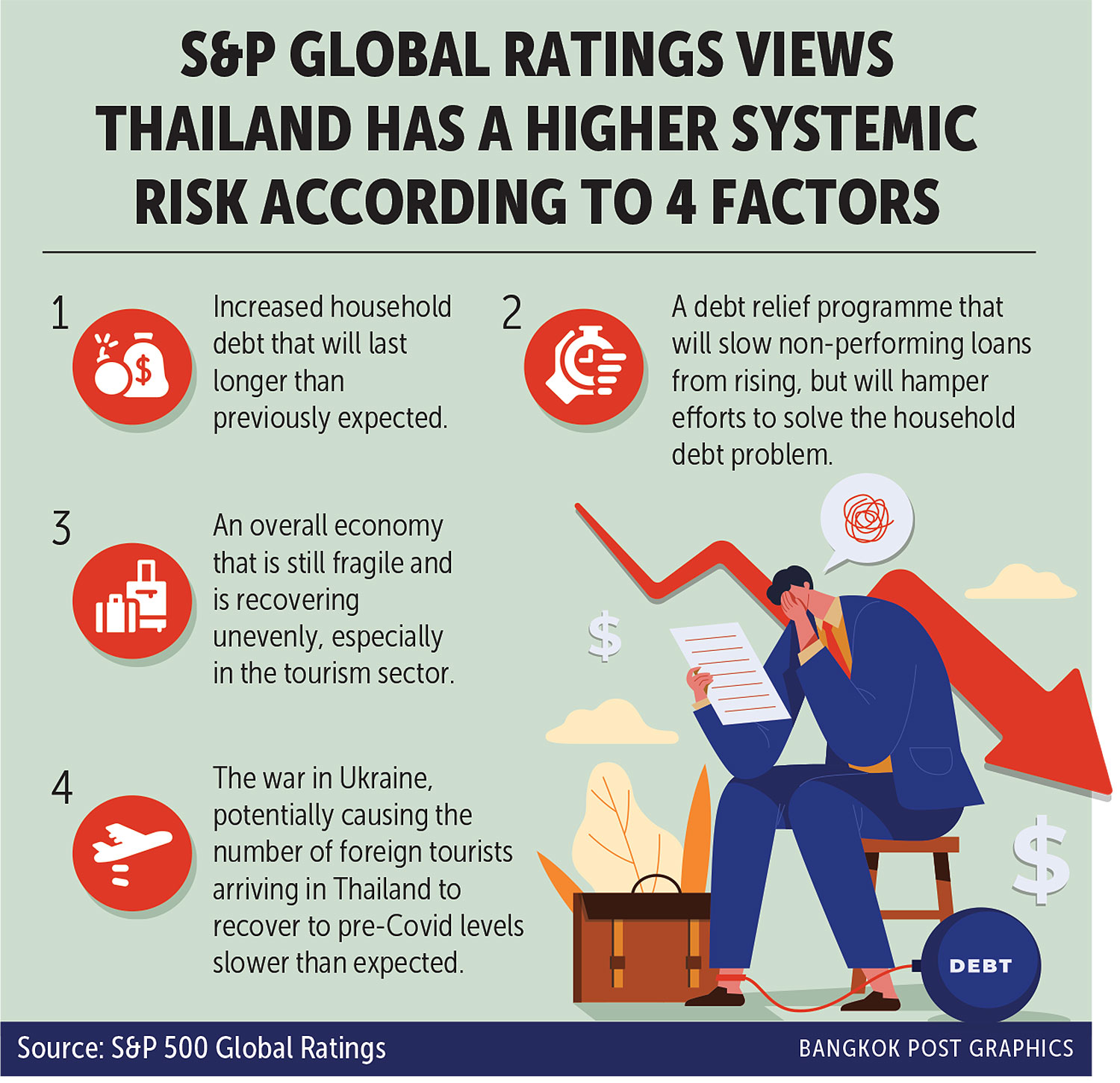 The credit ratings agency also said systemic risk may lift the level of non-performing loans (NPLs) and undermine the asset quality of companies in the finance group.

Fundraising costs could rise on concerns that the Federal Reserve may raise interest rates faster than the market expected if inflation remains high after this month's hike.

S&P lowered its ratings for Siam Commercial Bank (SCB) and Kasikornbank (KBANK) to "BBB" from "BBB+", and Krungthai Bank (KTB) and TMBThanachart Bank (TTB) to "BBB-" from "BBB".

S&P said it affirmed its "BBB+" rating on Bangkok Bank because "the lender's high systemic importance in Thailand offsets this risk", in addition to Bank of Ayudhya, which benefits from being a strategic subsidiary of Mitsubishi UFJ Financial Group.

Following the report, shares of SCB, TTB and KBANK dropped 1.31%, 0.76% and 0.32%, respectively. KTB dropped before rebounding to the same level from the previous day.

The research team cut the standalone credit profiles of all six banks by one notch because it expects high leverage among borrowers to likely persist for longer than expected, while regulatory relaxation is expected to result in a delay in resolving structural issues.

While steps taken by the government and central bank should reduce risks, the regulatory forbearance is likely just prolonging the pain of underlying problem loans, S&P said.

The agency said the economic recovery remains fragile and uneven across sectors in Thailand, particularly the tourism sector, which may be further hindered by the war in Ukraine hitting international travel.

S&P expects NPLs in the Thai banking sector to rise gradually over the next 24 months to 5%, the highest level since the 2008 global financial crisis.

While restructuring could provide a temporary lifeline, borrowers will remain dependent on better economic conditions and low interest rates amid the absence of any effective measures to reduce the high household debt burden.

S&P noted the banks have stable outlooks as they are maintaining good capitalisation levels and healthy provision coverage ratios, which should offer some cushion. The ratings have also already factored in some deterioration in the banks' asset quality over the next 12 to 24 months.

An analyst at KTBST Securities said the negative sentiment will put pressure on SCB, KBANK, KTB and TTB stocks in the short term. However, it will have a limited effect on the cost of debenture issuance because debentures account for only 2-3% of the banks' total debt.

As the pandemic situation gradually improves, the analyst expects NPLs to increase to 3.49% in 2022, slightly up from 3.11% in 2021, though they will not be much of a concern because banks still have very high capital reserves with an average coverage ratio of 177%.

As of February 2022, the total value of loans from eight local commercial banks grew 0.5% to 10.8 trillion baht month-on-month, driven by recoveries in corporate loans and hire-purchase loans.

The banks with the highest increase in loans month-on-month were Kiatnakin Phatra, up 1.8% from hire-purchase loans, and KBANK, up 0.9% from corporate loans.

KTBST expects the overall loan portfolio to see a steady recovery this month because the repayment period of major debts is over. In addition, it said a planned motor show should increase hire-purchase loans.