The Securities and Exchange Commission (SEC) is imposing a ban on the use of digital assets for goods and services, effective from April 1, citing concerns over the country's financial stability, risks of cybertheft and losses from currency volatility.

Digital asset business operators and market participants said the SEC's move, though it may have a puny impact on the fledgling local digital asset industry, will stunt innovation and kill long-term economic gains from adopting such payment systems.

According to the Bank of Thailand and the SEC, digital asset business operators must comply with the new rules within 30 days from April 1.

The second rule states operators must notify the regulator if they find that their clients are misusing their accounts or using digital assets to pay for goods and services. Operators are obliged to take action against customers that fail to comply with the companies' terms of service. Such actions may include temporary service suspension and termination of accounts.

Zipmex Thailand chief executive Akalarp Yimwilai said the ban didn't come as a surprise because this matter has been discussed by the central bank and the SEC for a while. It should have minimal effect as less than 1% of holders use digital assets as means of payment, said Mr Akalarp. He said most crypto investors use the assets for trading and investment on digital exchanges. 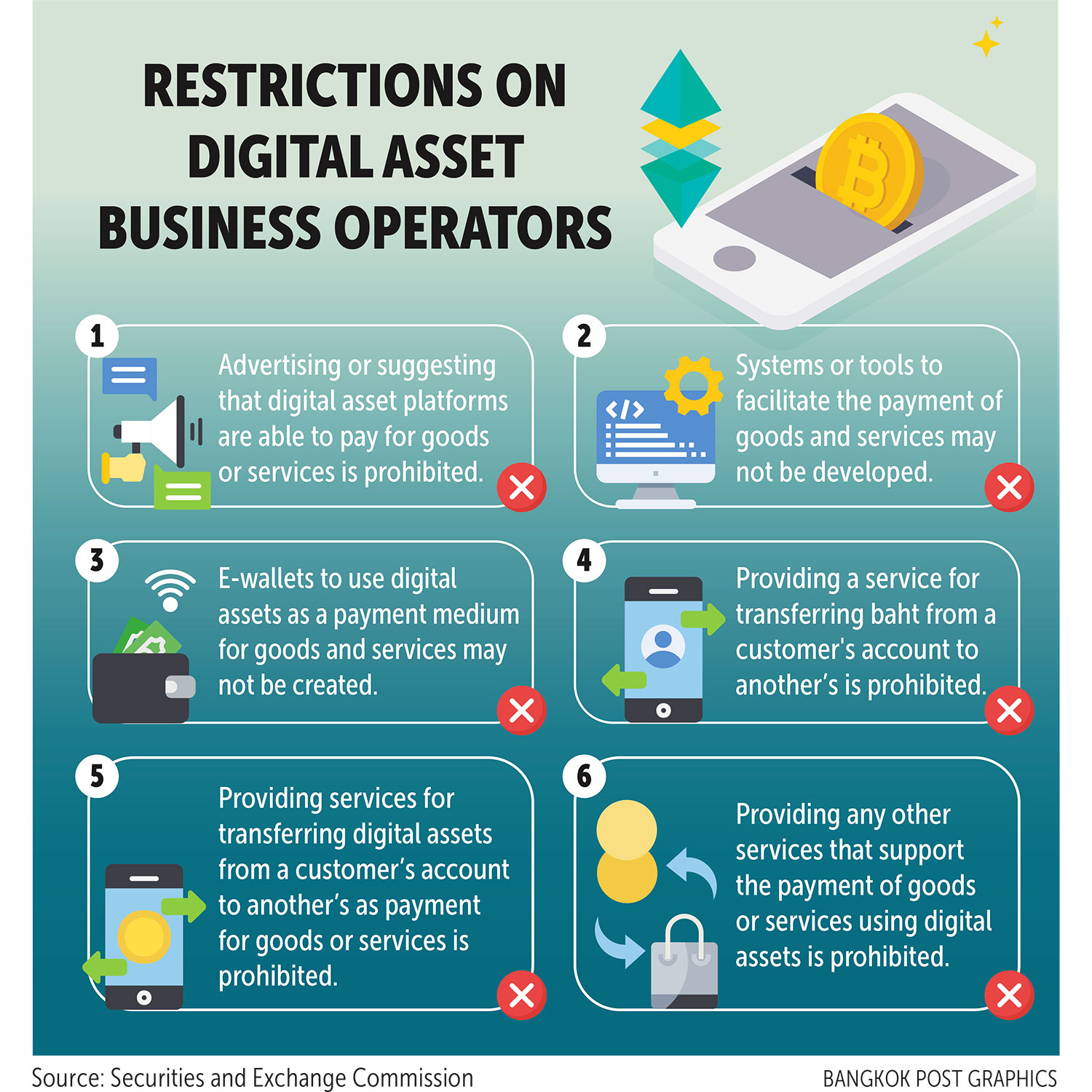 However, Mr Akalarp thinks the regulator should allow more time for the payment system to develop and test its efficiency by launching a sandbox programme in tourist destinations such as Phuket and Chiang Mai. The SEC could set a limit for daily usage of 10,000 baht per day, he said.

The ban may not impact the industry because the system is still in a nascent stage, but the country will lose the opportunity to develop a payment system that has much potential for future growth, said Mr Akalarp.

Akaradet Diawpanich, chief executive of Cryptomind Group Holdings, said the use of cryptocurrencies as a means of payment could benefit the tourism and retail industries in the long term, but the ban will likely ruin that opportunity.

SET-listed Jay Mart, which created JFin coins through its subsidiary J Ventures in 2018 for use in its internal business ecosystem, confirmed the move by the SEC will have no impact on its utility token or its adoption.

Pawoot Pongvitayapanu, an e-commerce pundit and founder of Tarad.com, a local e-commerce solution provider, said the SEC's move takes aim at only crypto exchanges, while users who have wallets can still buy, sell and transfer digital assets to others directly. For example, individuals can still pay for their vehicles with cryptocurrencies and this cannot be governed by the SEC, he said.

A spokesman at The Mall Group Co, a large mall operator, said the company is ready to fully cooperate in accordance with the government's latest measure. The government's new curb is unlikely to impact the group because the company stopped its plan to accept digital assets as payment for goods and services at its department stores after the New Year campaign ended in January, said the spokesman.

The ban received harsh criticism on social media, with many condemning the move as an attempt by the government to hinder Thais who have been trying to create wealth for themselves through crypto trading. Some said the government is too rooted in an archaic way of navigating the financial world, while others cried foul over the quick depreciation of cryptocurrencies since the news broke. 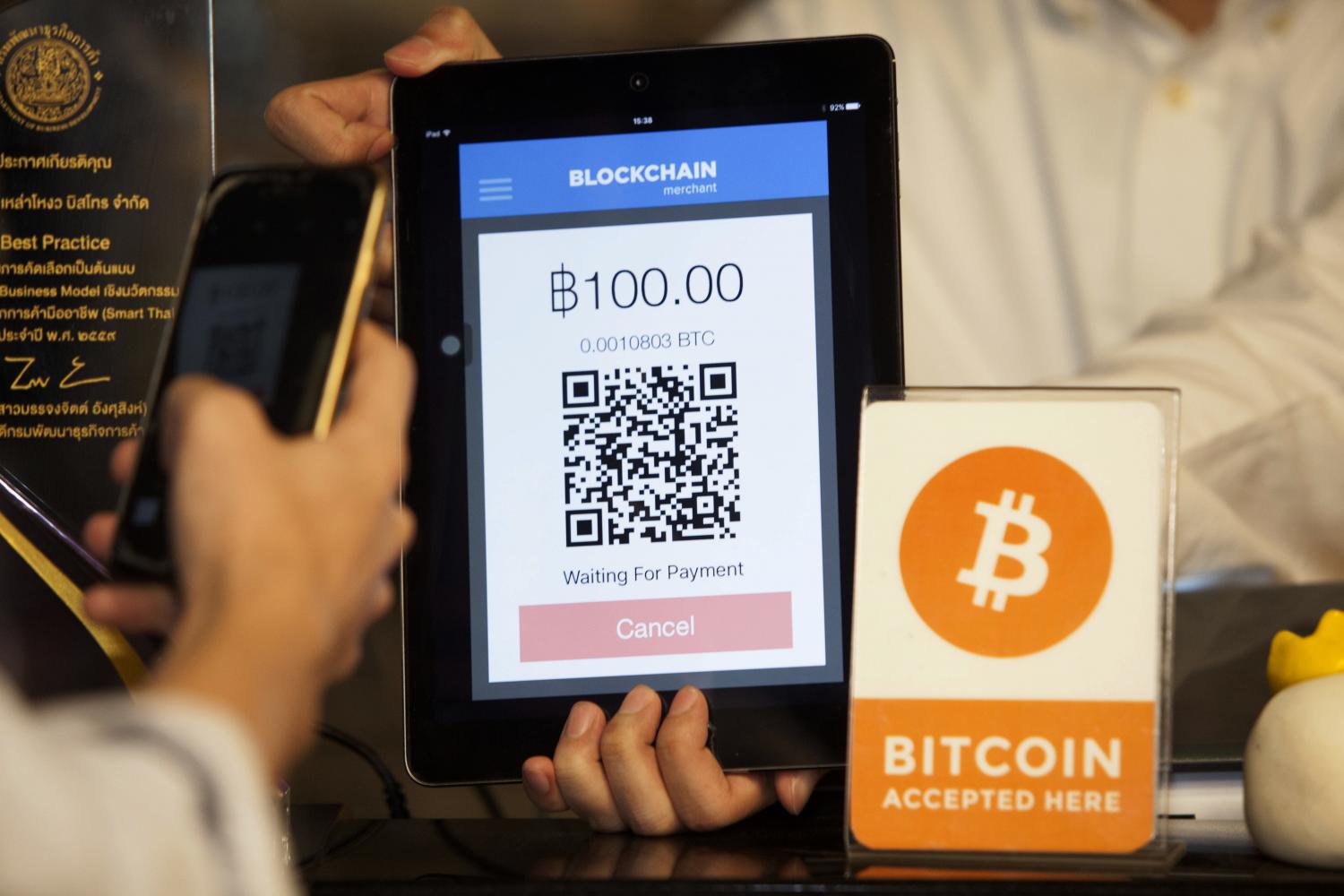 A customer pays for a meal at a noodle shop in Siam Square One with Bitcoin. (PHoto: Pawat Laopaisarntaksin)

CBDC IS THE FUTURE

A source in the Thai investment banking industry who requested anonymity expressed support for the SEC's decision. He said digital assets' volatility and the possibility of use in clandestine or illegal transactions are reasons for regulation.

"I think the SEC is worried about the high volatility of digital asset prices, which is one of the main reasons they are banned for the purchase of goods and services," said the source.

The source pointed to Ukraine's support of crypto as the country now receives donations in digital assets, while businesses in Russia are trying to dodge heavy Western sanctions by using cryptocurrencies.

"I believe the Bank of Thailand's move to quickly develop central bank digital currency for Thais to pay for goods and services using blockchain is where we are heading. This is similar to what the Chinese government is doing with the yuan," said the source.

For metaverse and decentralised finance, the central bank is allowing banks doing business in these DAs to use its regulatory sandbox first. Mrs Roong said the central bank is planning a public hearing about these guidelines, with implementation by the middle of this year.