An economic splash of cold water

Songkran revellers enjoy splashing each other at a celebration at CentralWorld in April 2017, before the Covid restrictions. (Photo: Seksan Rojjanametakul)

The Songkran celebrations not only mark the Thai New Year, but also may help determine the economic health of the country this year amid a prolonged global oil price hike and new fears about an Omicron infection surge.

The five-day holiday, expected to see tepid spending despite a surge in travel, will be factored in to a new assessment of economic activities including tourism for 2022, following uninspiring forecasts made by research houses before Songkran. 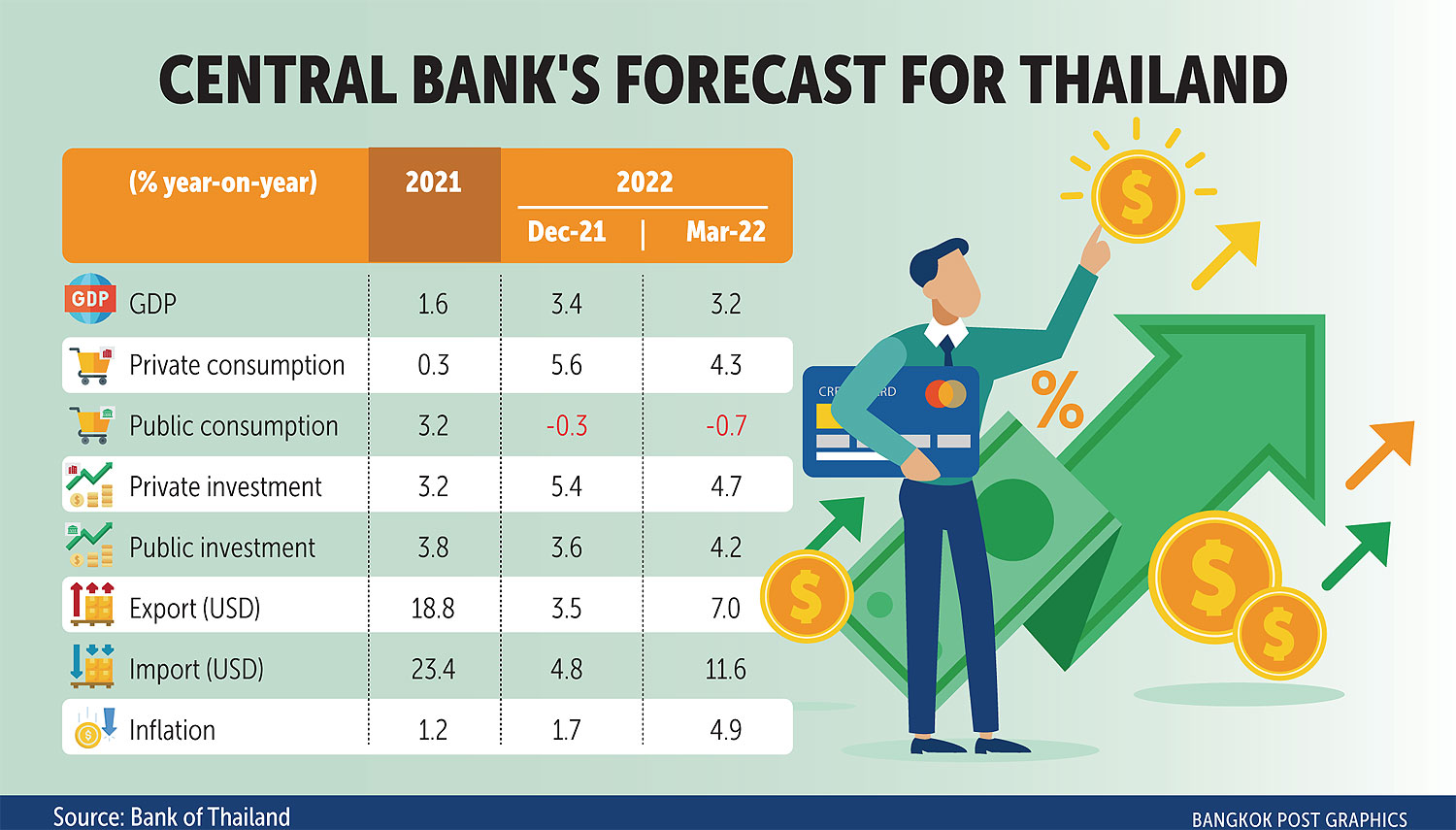 Nattaporn Triratanasirikul, assistant managing director at Kasikorn Research Center, said new infections from Omicron variants are expected to peak after Songkran. The symptoms of Omicron variants appear be weaker than the Delta variant, while the country's public health system is expected to manage the uptick in cases.

The government plans to implement targeted measures to contain the outbreak in densely packed areas, though no lockdowns are anticipated. These measures should not significantly impact economic activities, Ms Nattaporn said.

The Public Health Ministry forecast daily infections could hit 100,000 after Songkran unless stricter measures are followed.

She said assuming new infections do rise, a higher inflation rate and increasing energy and food prices would pressure consumer purchasing power after the festival and throughout this month. As a result, consumer spending and economic activity would slow after the festival, said Ms Nattaporn.

Normally April posts a seasonal spending uptick because the month has several holidays. But consumption is expected to decline because of a higher inflation rate amid a fragile economic recovery, meaning consumers will tighten their spending, she said.

Headline inflation in March increased to 5.73% year-on-year, rising from 5.28% the previous month.

Amonthep Chawla, head of the research office at CIMB Thai Bank (CIMBT), said new Omicron infections could exceed 50,000 per day following Songkran, up from the existing tally of roughly 25,000 positive RT-PCR tests per day. The higher projection may make consumers more concerned, convincing more to stay home rather than venture outside, he said. 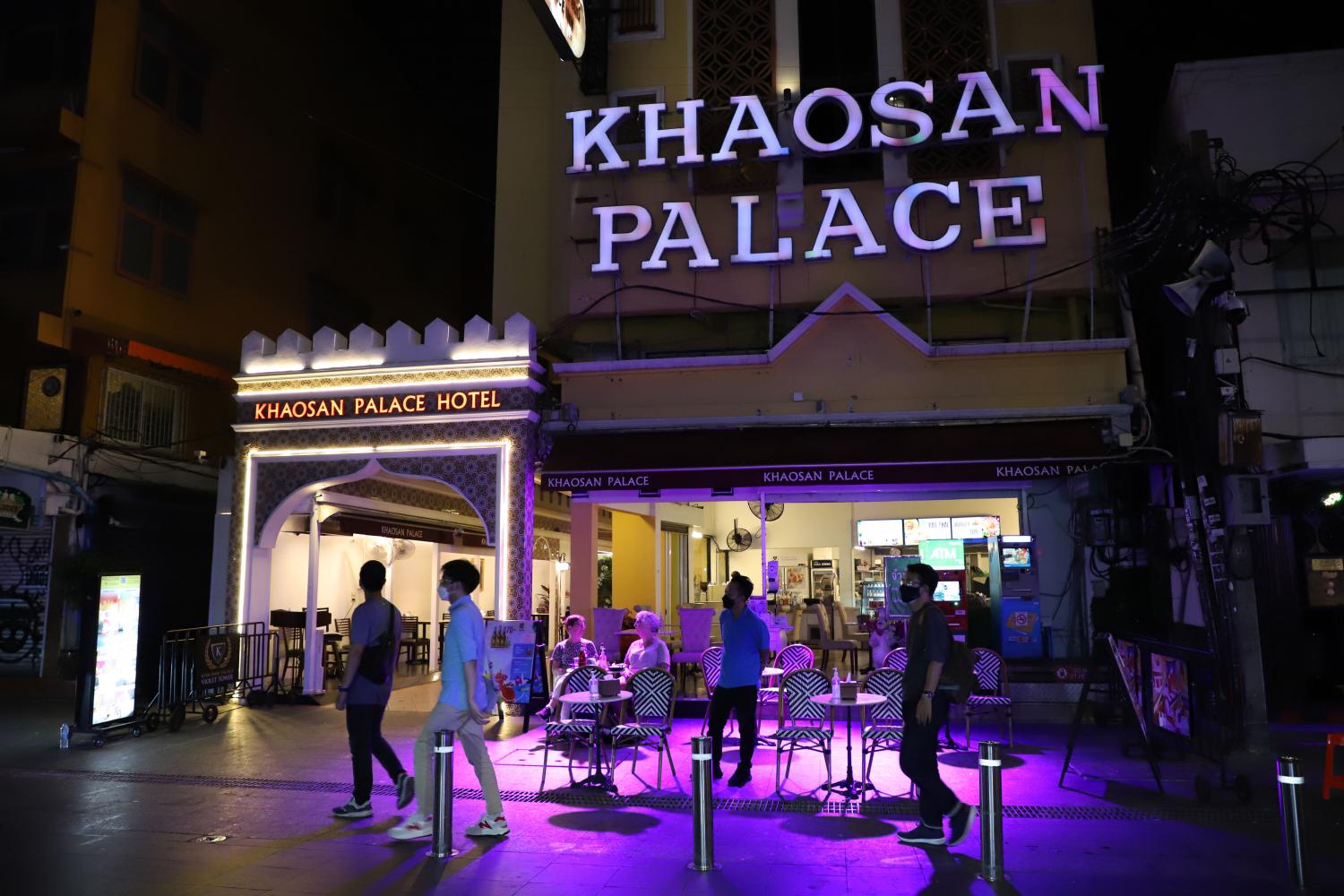 The atmosphere at Khao San Road in Bangkok ahead of Songkran festivities. (Photo: Varuth Hirunyatheb)

In the tourism sector, operators want more relaxation of travel rules, claiming the cancellation of a required RT-PCR test within 72 hours before travel starting on April 1 is not enough to build up strong momentum in the international market.

According to an April-June survey by the Thai Hotels Association, hotel operators would like the RT-PCR test upon arrival to be replaced with a one-time antigen test kit for the whole trip in Thailand, as well as cancellation of the Thailand Pass app and insurance requirements.

Tourism Authority of Thailand (TAT) governor Yuthasak Supasorn said domestic tourism spending during Songkran might improve, but the local market alone cannot support a strong recovery as tourism in the past year contributed less than 10% of GDP, plunging from almost 20% prior to the outbreak.

He said the industry still needs the international market to sustain operations and the TAT plans to push forward proposals enabling a wider reopening without restrictions that hamper tourists.

The Centre for Covid-19 Situation Administration plans to monitor the situation during the Songkran festival before deciding on further relaxation. The number of new infections and Covid fatalities in this month is expected to be crucial in determining entry policy in the next few months.

Since Thailand dropped the pre-travel test requirement on April 1, inbound visitors have surged to more than 10,000 per day this month.

"Further relaxation is necessary for the tourism industry. We started this process last year and should not be left behind," said Mr Yuthasak.

"However, any decision will depend on public health authorities weighing the importance of the economy and local confidence, as some people remain concerned about the viral situation in the country." 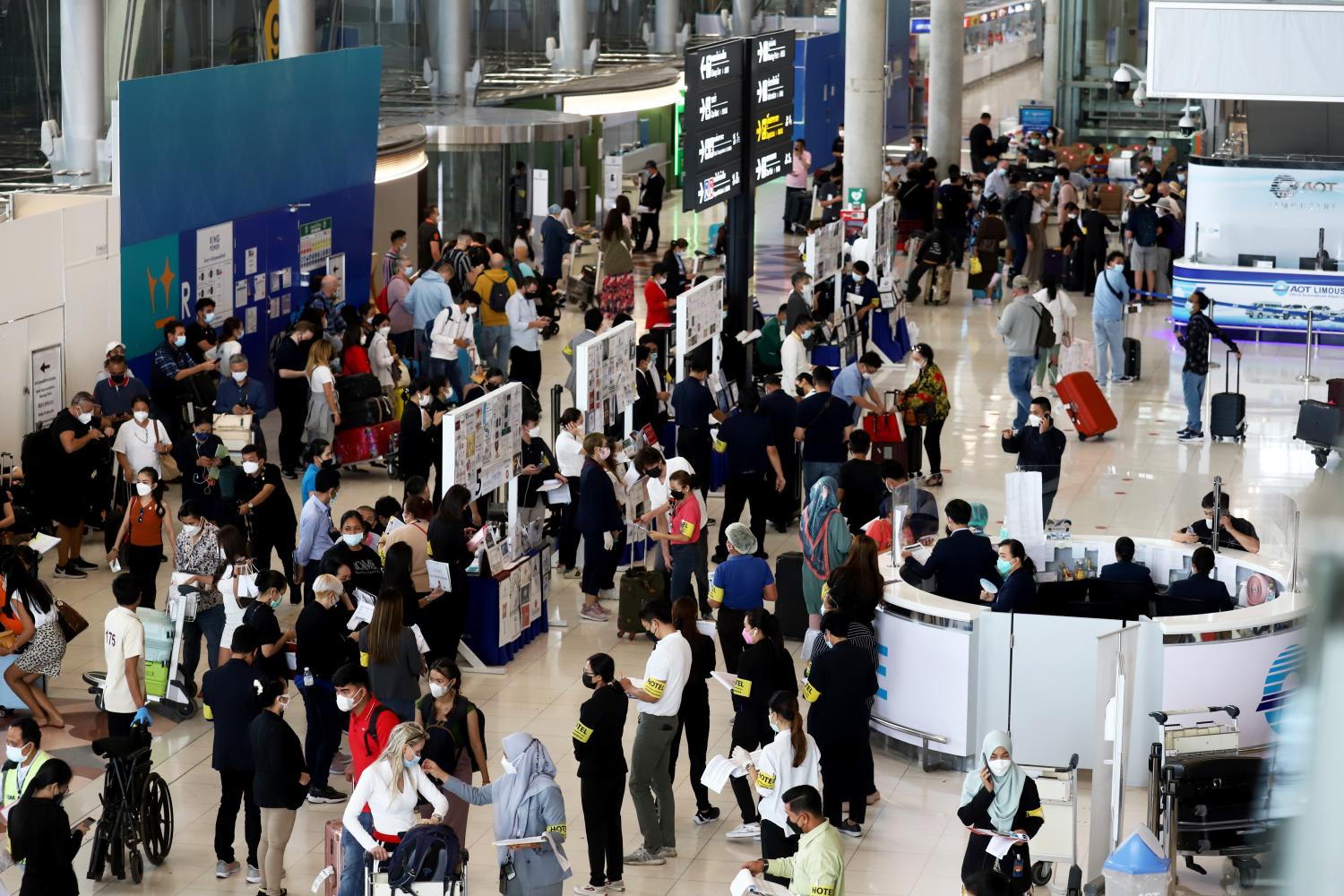 While the long Songkran holiday may help to reinvigorate the flagging economy, it is also a critical time to monitor whether Covid-19 infections surge, according to Somchai Lertsutiwong, chief executive of Advanced Info Service (AIS), the country's biggest mobile operator by subscriber base.

The pandemic situation after Songkran could shed light on the future economic outlook, he said.

If Covid infections do not worsen after Songkran, it is a good signal that Thailand is on the path towards economic recovery in the near future, driven by tourism, said Mr Somchai. If infections surge, this would be worrisome as the government may have to impose more stringent measures, which would inevitably hamper an economic recovery, he said.

According to Mr Somchai, the government should strike a balance between Covid-19 measures and methods to facilitate an economic recovery.

Singapore, for example, has a better economic outlook than many peer countries despite a rise in infections, he said. Singapore has proceeded with more relaxed measures in dealing with the pandemic.

Kriengkrai Thiennukul, vice-chairman of the Federation of Thai Industries, said the government must continue vaccinating people to ensure the virus does not spread easily.

The Thai population needs better immunity against Covid-19 before authorities declare the disease endemic, which is scheduled for July, he said.

"This vaccination push will increase people's confidence, which is crucial to government efforts to restore the economy in the long term," said Mr Kriengkrai. 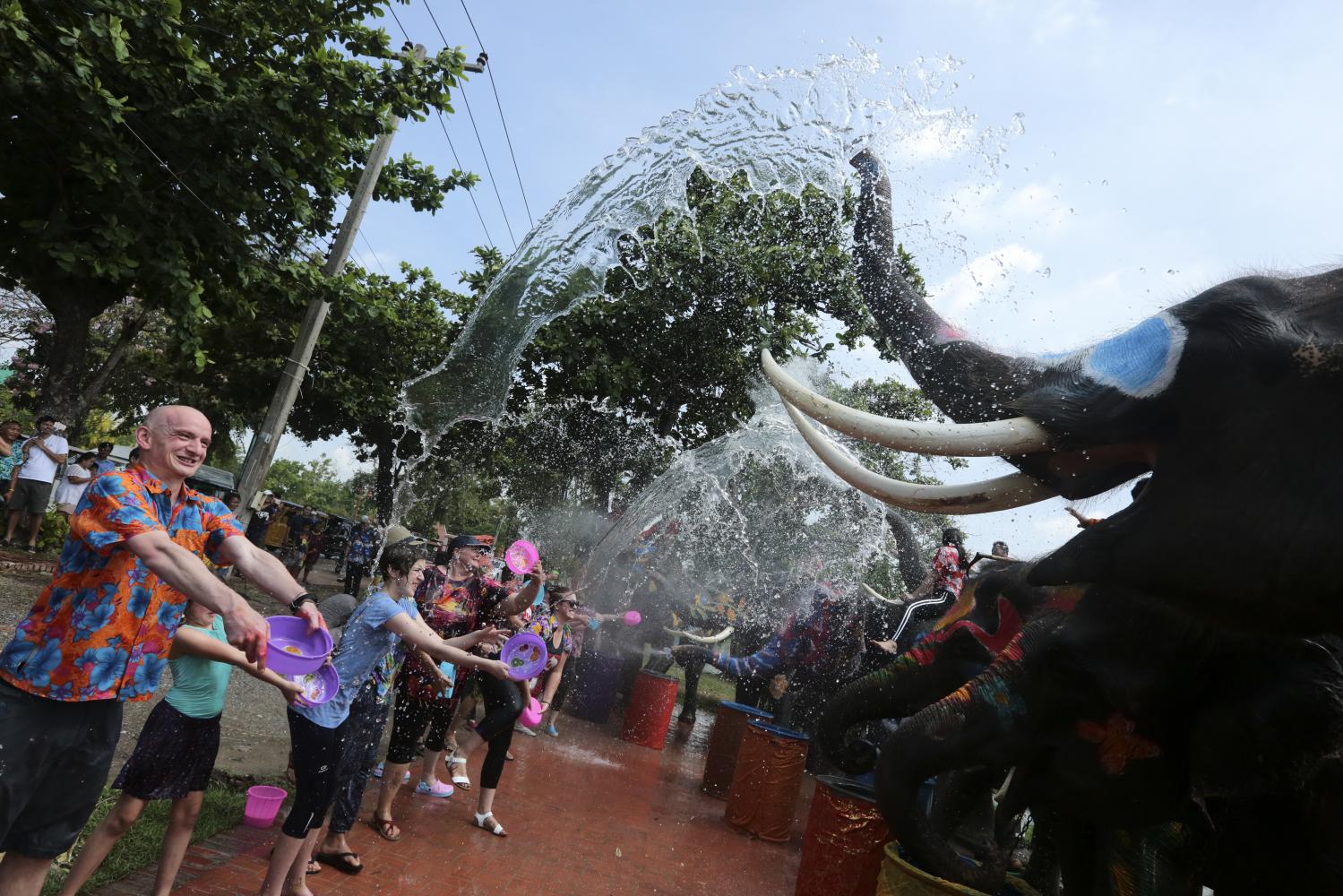 Songkran revellers and elephants have fun during the Songkran festival celebration in Ayutthaya during April 2017, prior to the Covid-19 pandemic. (Photo: Patipat Janthong)

Pundits are uncertain on whether the Thai economy will enjoy a significant recovery in 2022, though they are upbeat about brighter prospects later in the year.

Sanan Angubolkul, chairman of the Thai Chamber of Commerce, said he predicts consumer consumption after the Songkran festival is unlikely to improve much. He called on the government to continue economic stimulus packages, especially extending the "Khon La Khrueng" co-payment subsidy scheme due to end this month, as well as ease the strict entry rules for foreign visitors to Thailand.

"The Khon La Khrueng co-payment subsidy should be extended without any interruption to boost people's spending power," said Mr Sanan.

"The chamber asked the government to continue the co-payment subsidies until the end of 2022, end the Test & Go scheme, and quickly reclassify Covid-19 as endemic to boost growth and tamp down signs of stagflation."

He said the Thai chamber predicts an uneven K-shaped economic recovery, with one-fifth of small and medium-sized enterprises unlikely to resume their businesses.

Echoing Mr Sanan, Voralak Tulaphorn, chief marketing officer of The Mall Group Co, a leading department store chain, said consumer spending after Songkran is unlikely to see much change as consumers are still fretting over the high cost of living and rising product prices in the country.

Referring to a spike in the country's household debt, if the pandemic situation worsens after Songkran, debt will continue to mount, making the outlook more worrisome, said Mr Somchai of AIS.

Economic engines such as tourism and domestic consumption are in trouble, though exports have in better health since last year, he said.

Government spending could be another engine to ease economic constraints, said Mr Somchai, with the spending focused on creating income for people, including organising training sessions and generating jobs.

According to the CIMBT research office, the higher inflation rate and soaring fuel and food prices are the key factors dampening domestic consumption in the second quarter this year.

The research office forecasts the country's inflation rate to rise to almost 5% in the second quarter this year, based on rising global energy prices. Brent crude oil is expected to peak at US$120 barrel in the second quarter, mainly because of the impact from the Russia-Ukraine war.

Although the Thai economy has consistently been surrounded by uncertainties such as external risks, CIMBT research expects it to continue to rebound in the second quarter this year, driven by exports and a slowly recovering tourism sector. The office predicts Thai economic growth of 2.8% year-on-year in the second quarter and 0.8% quarter-on-quarter.

A source in the Finance Ministry who requested anonymity said the Thai economy is expected to recover in the third and fourth quarters this year. The growth will be driven by an increase in foreign visitors, which could inflate domestic consumption, said the source. 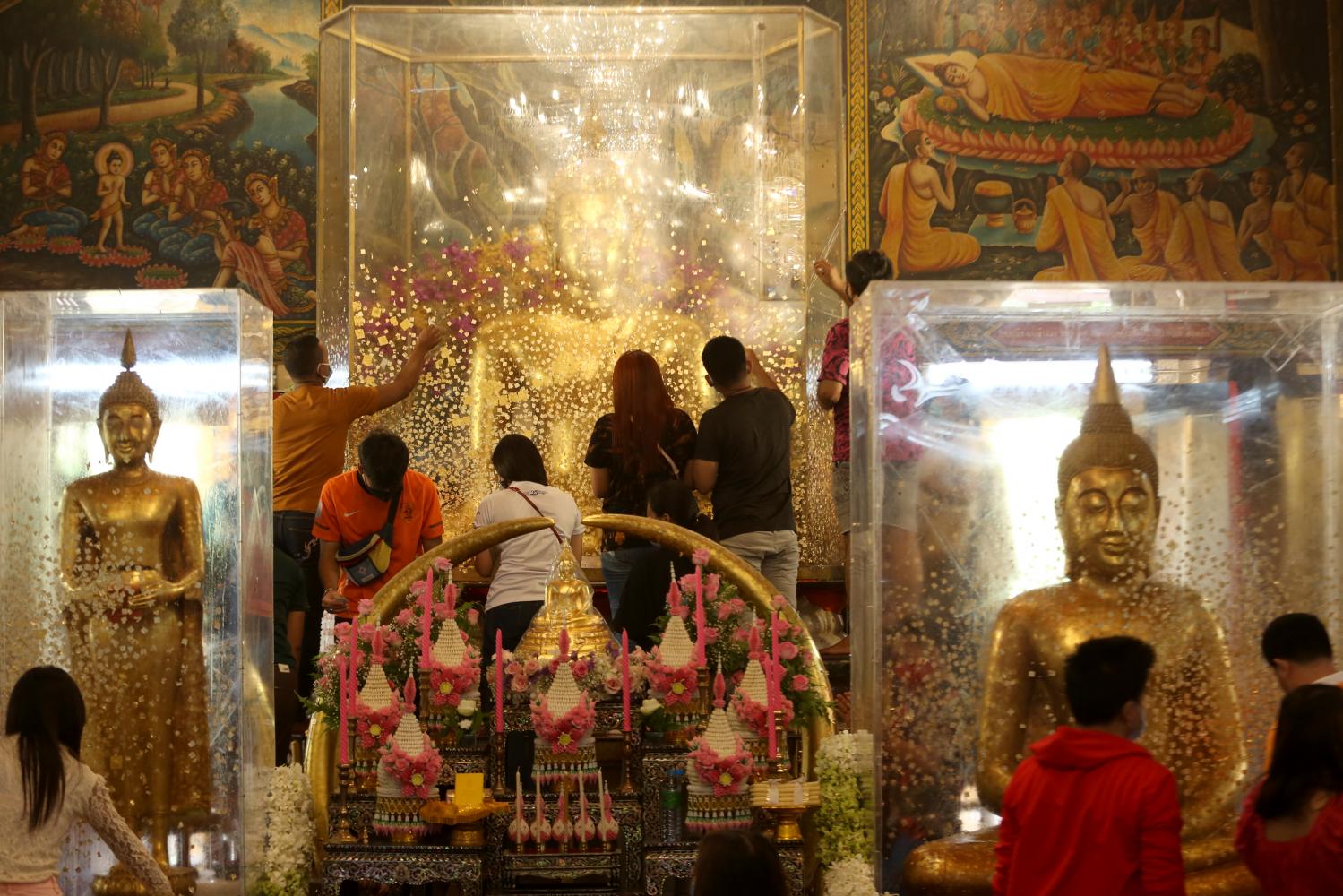 Oil companies are stocking up to serve bustling travel demand during the Songkran festival, while for the whole year domestic oil consumption is expected to keep increasing towards pre-pandemic levels.

Oil demand is projected to remain high despite the global oil price surge driven by the Russia-Ukraine war.

Premier Tank Corporation Plc (PTC), which recently listed on the Market for Alternative Investment, expects travel volume to be similar to previous Songkrans. The company, which buys oil from its sole supplier PTT Oil and Retail Business, provides fuel tank and oil dispenser services for local oil traders in the Northeast.

"We expect oil consumption during the festival to rise by 10% from last year," said Weerawat Burapapattanapong, chief executive of PTC.

The Northeast has the largest population in the country and many of them work in other regions. As there are no domestic travel restrictions during Songkran, a large number of people born in this region are expected to flock home via both personal and public transport.

Two years ago, the government decided to ban Songkran holidays when Covid-19 first broke out in the country. Susco Plc, a local oil trader, recorded a sales decline during the holiday that year and again in 2021 following a fresh outbreak of the pandemic during Songkran.

Thailand started easing lockdown measures in September last year and on Nov 1 reopened the country to foreign tourists. The move came as many governments reopened their borders to jump-start economies late last year, resulting in growing demand for oil and subsequent higher prices.

Global oil prices skyrocketed with the start of the Russia-Ukraine war, which led to sanctions imposed by the US and its allies on Russia. If the war calms down but sanctions on Russia remain, analysts project global oil prices will remain at high levels. 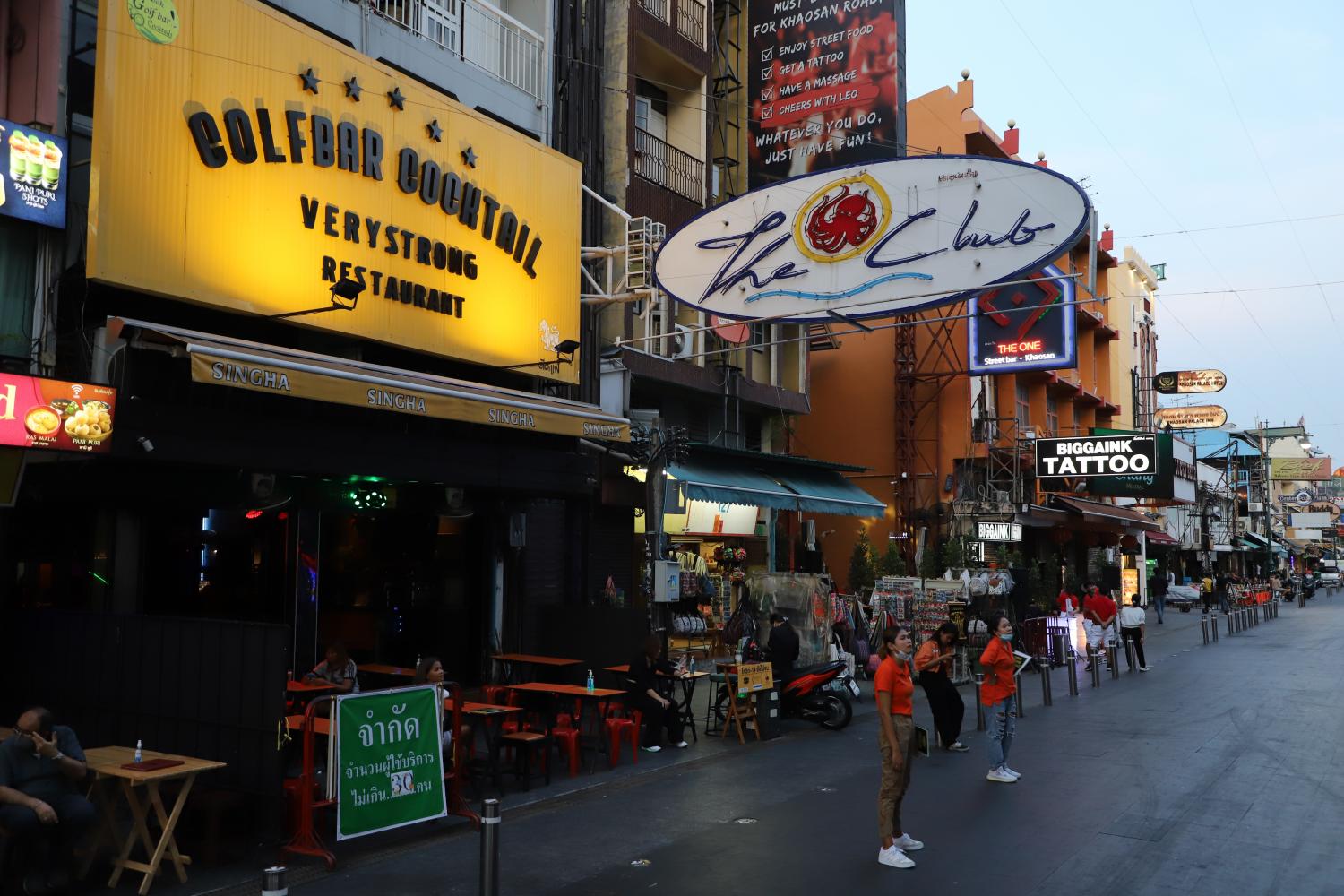 The atmosphere at Khao San Road in Bangkok ahead of the Songkran festivities. (Photo: Wichan Charoenkiatpakul)