TV shows centred around men's homoerotic relationships have emerged as one of Thailand's top cultural exports, with their popularity in Asia bringing all sorts of knock-on benefits such as a boost to tourism

‘Miracle Of The Teddy Bear’ is the first ‘Boys Love’ series from Channel 3.

Buoyed by the openness of the LGBT community, Thailand's "Boys Love" (BL) movies and series have been well received in the local market and are considered promising export products that can draw lucrative revenue streams and foster business opportunities in other areas, including tourism.

BL dramas are known in Thailand as Y Series, derived from the Japanese term "yaoi", which refers to a genre of fictional media that features homoerotic relationships between male characters.

The government last year said that Thailand's Y content market was worth more than 1 billion baht, with the key export markets including China, Japan, Taiwan, the Philippines, Indonesia and Latin America.

In June last year, the Department of International Trade Promotion held an online Y content business matching event to boost the industry, with the participation of 10 Thai content creators.

More than 360 million baht was generated from the purchase of the Thai content, with the top three buyers coming from Japan, Taiwan and Vietnam.

One of the most popular Thai Y Series in overseas markets is "2gether", which was produced by Thai television production studio GMMTV and launched in 2020. 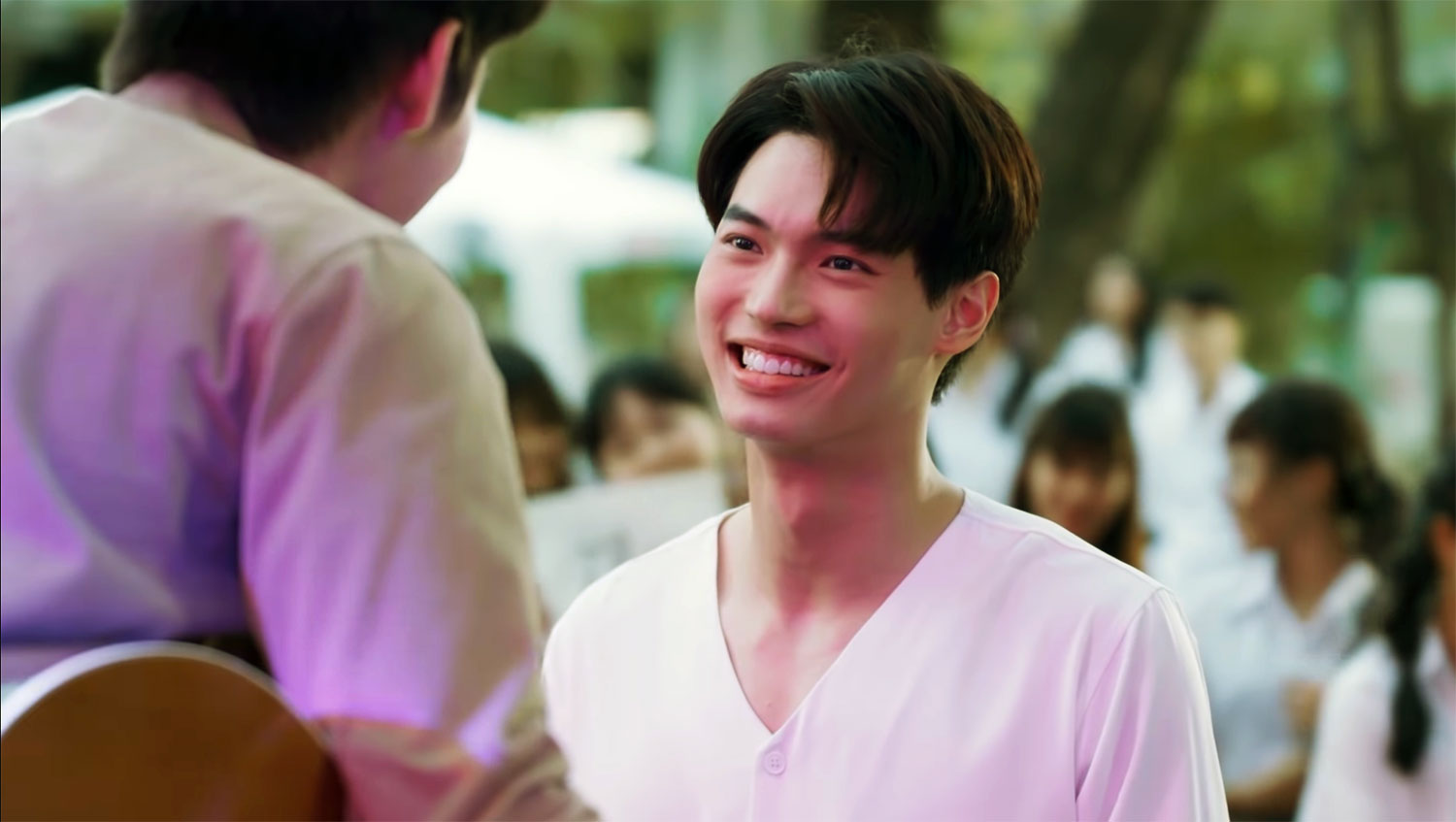 The TV series ‘2gether The Series’ has gained popularity internationally.

According to Japanese publication Nikkei, the "2gether" show began on Japan's Rakuten TV streaming platform in July 2020, and eventually became No.1 on the platform's annual movie and drama rankings.

A Japanese tour operator, H.I.S. Tours, has organised a virtual tour to locations where some scenes in 2gether were shot, according to the Japanese news agency Kyodo News. The Feb 11 online tour drew more than 250 people, with nearly 99% of them women.

According to blwatcher.com, a website dedicated to BL content, Thailand has dominated the BL content market with a large number of Thai BL dramas. "Few countries have embraced BL with as much enthusiasm as Thailand, and its popularity has spread worldwide," it said.

The website said 30 Thai BL dramas were rolled out in 2021, and another five have been launched since the beginning of this year.

Noppharnach Chaiyahwimhon, GMMTV's senior director of content production, said his company has rolled out various Y Series over the past six years.

He agreed that Y Series is one of Thailand's most influential tools of soft power, with the popularity growing each year, including in international markets such as China, Taiwan, Japan, the Philippines, Indonesia and Myanmar.

The business ecosystem linked to Y Series in Thailand shows a growth of 30-40% per year, he said.

At the beginning, GMMTV experimented by introducing a male couple as second-tier protagonists in one drama, but it turned out that the couple was more popular and talked about than the leading male-female characters, he said.

GMMTV then launched its first Y Series "Sotus" in 2016 and received favourable feedback from viewers.

The leading couple in the drama have been employed as product presenters, which also generated indirect benefits to the company, based on their contracts with the firm.

Y Series can also be a boon for other businesses, such as films, artist management and merchandise, said Mr Noppharnach.

Y Series from Thailand have been translated into several languages to serve international markets, he said. One of the Y Series from GMMTV was turned into a play in South Korea.

Mr Noppharnach said 20% of around 100 GMMTV artists engage in Y Series, and its popularity has shown no sign of abating.

WeTV, a major video streaming platform owned by Chinese internet giant Tencent, said that Y Series from Thailand is one of the most popular content genres on its platform.

The platform currently has 50 Y Series, with a ratio of Thai to other Asian Y Series from South Korea, Japan and Taiwan at about 50:50.

"In terms of soft power, Thai Y Series has strong potential to generate both financial value and awareness across the globe," said Kanokporn Prachayaset, chief commercial officer and country manager of WeTV Thailand.

"Many Thai Y Series stars are icons in many markets, not just in Thailand, and the trustworthiness of Thai Y Series is also steadily increasing among audiences. Today, Y Series from Thailand are preferred by fans around the world."

WeTV is sourcing Y Series from Asia as well as having its own WeTV original shows by working with various local production houses, such as GMMTV, TV Thunder, Dee Hup House, M Choice Studio and All This Entertainment.

She said fan groups for Thai Y Series actors emerge on various social media platforms, such as Facebook, Instagram, Twitter and TikTok, and they are active in organising activities and campaigns for their idols.

"Thai Y Series is one of the content genres that is ranked high on many platforms, and these series have regularly created social media phenomena like being on top of Twitter Trends, not just in Thailand but at a global level," Ms Kanokporn said.

"Thai Y Series is a soft power with two key ideas: building gender openness and equality as well as sustaining growth of the genre in the long run."

The tourism industry can capitalise on the worldwide popularity of Thai BL series, particularly in Asia.

Seksan Sripraiwan, director of the Tourism Authority of Thailand's (TAT) Tokyo office, said the TAT and the Royal Thai Embassy have actively promoted the country by using Thai entertainment, including Thai dramas, T-Pop (Thai pop music) music and illustrations at the annual Thai Festival in Japan.

As people have had to spend time at home during the pandemic, female office workers and housewives have tended to consume more Thai BL dramas.

The Japanese government previously declared a state of emergency to curb the virus, but Thai BL events such as exhibition roadshows and virtual fan meetings still received a high level of engagement from fans.

Mr Seksan said Thai BL TV shows had spread quickly and will continue to grow in the future by word of mouth, thanks to attractive characters, storylines, locations, Thai food and the Thai language, which catch audiences' attention.

Japan's market for Thai BL is around 1 million viewers, of which 20,000-30,000 are heavily active on social media sites for renowned BL actors, led by Bright-Win and Krist-Singto.

"BL is a niche market," said Mr Seksan. "This segment has potential for Thai tourism as most Japanese BL fans could turn into first-time visitors for Thailand. They are willing to spend on BL-related products and service for their experiences."

Tour operators also plan to partner with entertainment companies in Thailand and Japan to host exclusive fan meeting events during those trips.

"There is demand from Japanese tourists who plan to buy BL tour packages to Thailand as they are waiting for the country to ease travel rules," said Mr Seksan.

The TAT continues to spur the popularity of Thai BL in Japan by partnering with local TV channels to introduce new tourism sites, and creating joint promotions with tour operators for virtual tours to film locations.

Mr Seksan said the office also creates online content to promote gastronomy or the Thai language from TV series via Twitter and Instagram, which are the most popular platforms in this segment.

Kanokkittika Kritwutikon, director of the TAT Chengdu office, said Thai BL TV shows have gained popularity in China, such as the coming-of-age series "I Told Sunset About You", which helped drive tourists to Phuket, the main location of the story.

"Most Chinese BL fans are millennial females who can offer long-term support for their favourite actors," she said.

As the Chinese government's policy and cultural stance towards the LGBT community is not open, tourism promotion via Thai BL content cannot be as explicit as in other markets.

On the other hand, Chongqing, which is one of the cities under the responsibility of the TAT Chengdu office, has been ranked as China's top city for LGBT with a potential market of 3 million people, Mrs Kanokkittika said.

The agency has promoted tourism directly through the Aloha application, China's social networking app for the gay community, by inviting Chinese gay couples and key opinion formers to test luxury tourism products in Thailand, such as yachting.

Mrs Kanokkittika said the LGBT segment could be categorised as luxury travellers as they are high-income earners, live in key cities, and want to spend more for travel experiences.