While tourism operators are thankful for relaxed entry rules, many expect a more gradual recovery than the government is trumpeting

Arrivals at Suvarnabhumi airport on May 1, the first day since pandemic rules began without an RT-PCR test requirement for vaccinated travellers. (Photo: Wichan Charoenkiatpakul)

On April 30, after the last inbound visitor went through the RT-PCR testing process at Phuket airport, it represented the culmination of a 10-month mission for the quarantine team at the terminal. 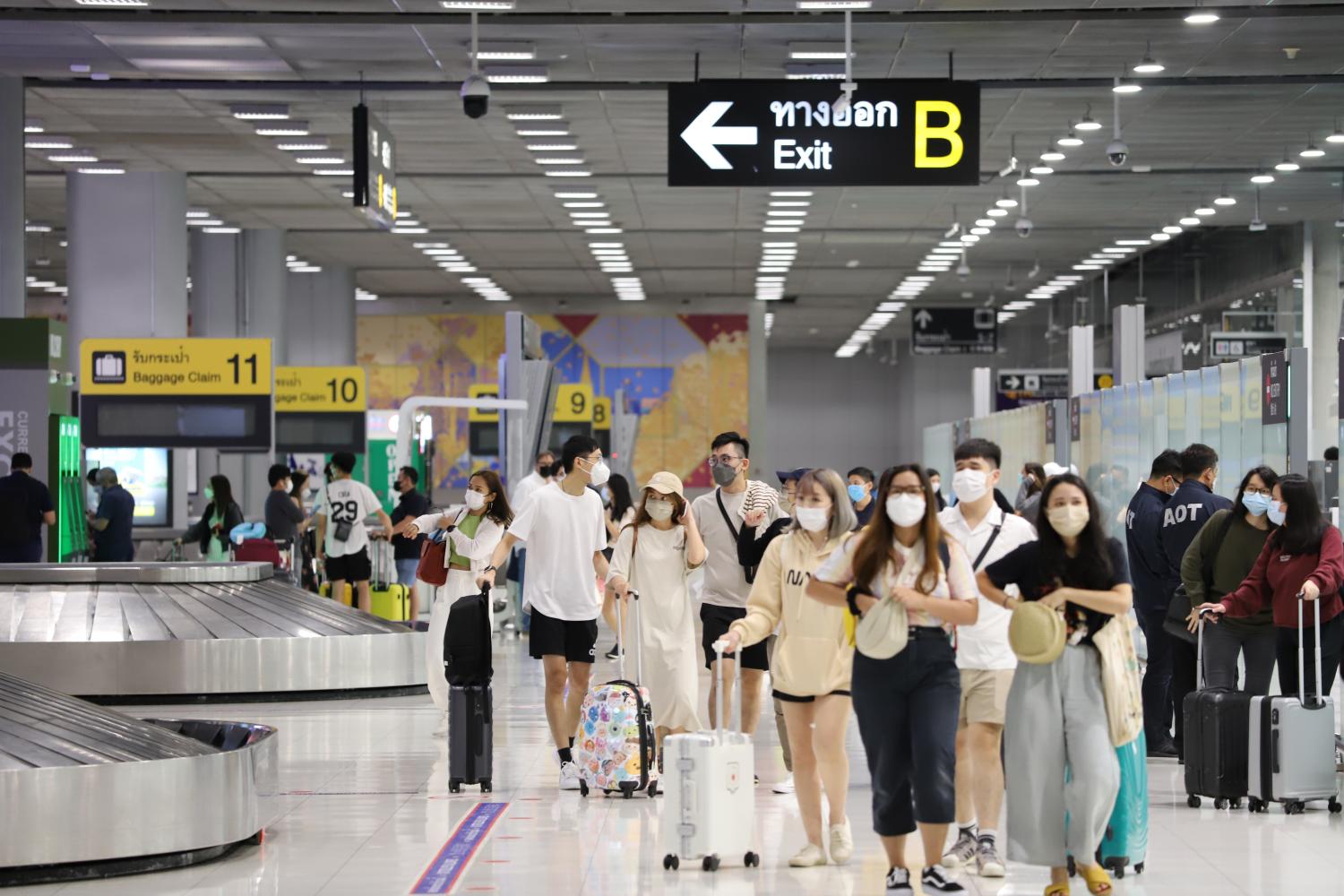 Arrivals at Suvarnabhumi Airport on May 1, 2022, following the scrapping of the RT-PCR test requirement for vaccinated travellers. (Photo: Wichan Charoenkiatpakul)

A new rule starting on May 1 eliminated Covid test requirements for vaccinated travellers, raising hopes in the bruised tourism industry after some operators earned minimal income for two years.

However, tourism operators say they are wary because the pandemic left them "once bitten, twice shy", as a variant could spread at anytime, while local political conflicts are looming larger in many places.

To cope with such uncertainties, tourism operators are calling for an improved government plan to avoid repeating the same mistakes that saw them struggle to stay alive the past two years.

Industry demand for a clearer, stronger reopening policy is expected to allow visitors to travel with fewer obstacles and confusion. 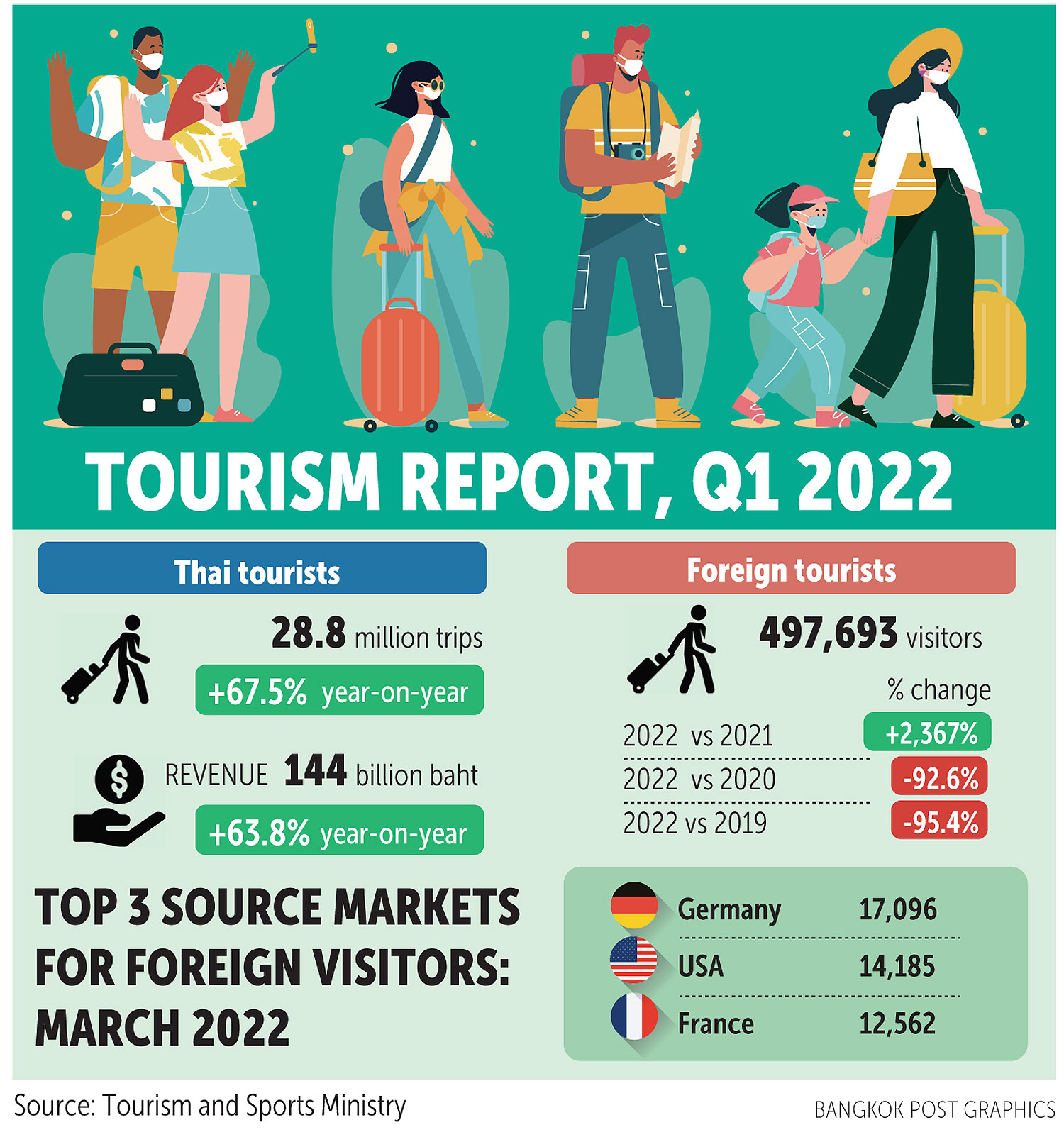 The Thai reopening to tourists struggled through a number of regulatory flip-flops before reaching its current state, free of most restrictions.

Phuket was the first destination to reopen under a sandbox programme in July 2021, before allowing other destinations to welcome visitors via a relaxed Test & Go scheme in November.

For the nation, the robust version of the Test & Go programme mandated both a pre-travel RT-PCR negative result and one night at an approved hotel upon arrival while to await the results of a new RT-PCR test in Thailand. This programme recorded 497,693 international tourists, or more than 165,000 arrivals per month on average from January to March.

However, after the pre-travel RT-PCR test requirement was removed in April, the monthly arrival figure skyrocketed to 382,212.

This boost in sentiment marked a sea change in helping to convince the Centre for Covid-19 Situation Administration to dismiss all requirements for Covid-19 tests starting this month.

Sisdivachr Cheewarattanaporn, president of the Association of Thai Travel Agents, said tourism during the past six months under the Test & Go programme was a cycle of ups and downs.

Even though the recent rule relaxation is considered a good sign for the industry, he believes the key factors to lure visitors are maintaining consistent entry requirements that prioritise traveller convenience and having a solid health care plan for locals to safeguard against new variants. 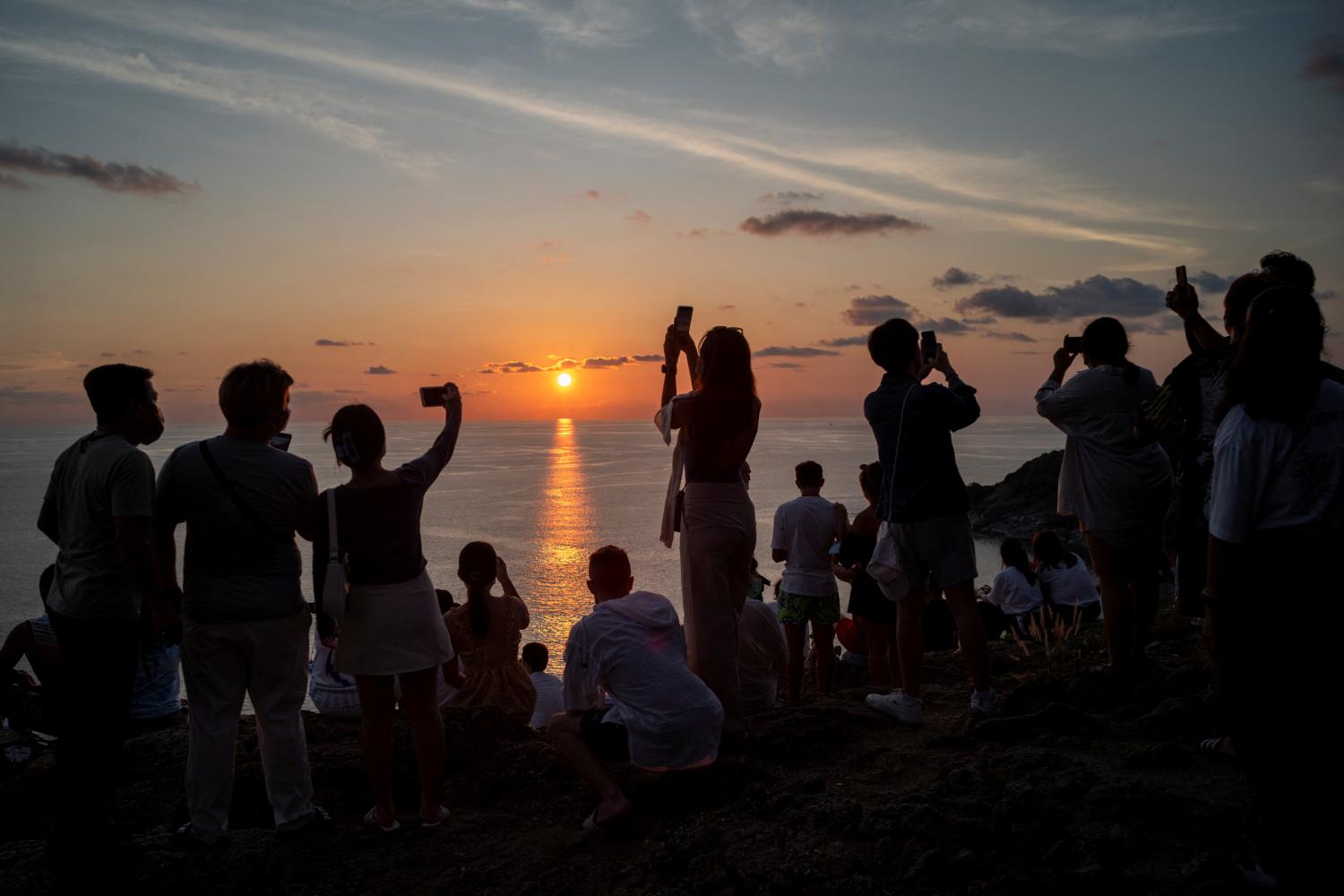 Locals and tourists watch a sunset on Phuket's Phromthep Cape on April 9, 2022. The island was the first Thai destination to reopen last year. (Photo: Reuters)

If a new variant emerges, returning to restrictive border rules might be an inappropriate reaction as past experience showed this industry cannot survive with a half-hearted reopening, said Mr Sisdivachr.

"The government should start thinking about a safety net to cope with uncertainties. The health care system should help all locals equally, which is the most important factor to remain open to tourists with confidence," he said.

Global tourism surveys found only 20% of respondents are ready to take outbound trips.

Marisa Sukosol Nunbhakdi, president of the Thai Hotels Association, said now there are no additional factors helping to spur a spike in tourism.

"It's not possible to post 10 million foreign arrivals this year [the upper bound of the government's forecast] without the Chinese market," said Mrs Marisa.

The May outlook might be more promising than the past few months, but growth will be limited, with a best-case scenario of around 1 million tourists per month during the final quarter, she said.

"We should not forget some tourism operators are still on the sidelines. Most hotels remain closed as current income may not cover operational costs, while service charges, which is an important source of revenue for workers, are scarce because of weak demand," said Mrs Marisa.

"Though we should get a better result this year than the past two, the practical outlook for arrivals should be 6-8 million."

Liberal entry rules should continue in the long run as long as the country doesn't face another deadly variant, she said, similar to the spread of Delta variant in 2021.

Any decision that deters tourists from coming here could hurt tourism operators and prevent them from returning to a healthy financial condition, said Mrs Marisa. Outbound tourism is predicted to have a slow recovery this year, despite the relaxation of entry rules for many countries.

Before the pandemic outbound tourists tallied 13 million a year, but tepid growth is projected because of a weak baht, more expensive tour fares based on rising operational costs, and vague reopening policies that vary by country, said Mr Charoen.

"Inbound and outbound markets combined might recover to only 30% this year of 2019 levels," he said.

Mr Charoen said the recovery cannot happen overnight because the supply side is not ready to solve several challenges, particularly stagnant cash flow.

Most tour operators remain closed, while active companies struggle to maintain profit amid inflation, he said.

Many countries that traditionally rely on tourism for economic growth are still battling a spike in Covid cases, while others are reluctant to welcome foreign tourists, said Mr Charoen.

"If the government wants to earn 50% of the 2019 level for tourism revenue, recorded at 3 trillion baht, it needs to depend heavily on the domestic market this year," he said.

Taweesak Wanichcharoen, director-general of the Tourism Department, said during the first four months this year, 9,011 tour companies remained active with approved licences from the department.

In 2021, some 1,997 cash-strapped tour firms ceased operations and returned their licences to receive their guarantee deposit back. Newly registered tour companies tallied 1,119 last year, according to the department.

Tour operators returning their licences from January to April this year accounted for 559 companies, down from 706 during the same period in 2021.

Brighter prospects based on relaxed travel rules prompted new registrants during the first four months this year to reach 534 firms, up from 334 in the same period last year.

The confidence of tour operators dramatically picked up in April, with new registrations reaching the highest monthly tally at 154 companies, while exits from the sector dropped to the lowest monthly total at 106 companies.

As a veteran of the Chinese tour market, he doesn't believe Beijing will change its zero-Covid policy this year, which means Thailand cannot expect this massive market to return in 2022.

"Politics within China bears watching, with the Chinese Communist Party's 20th National Congress in the second half of this year a critical transition period," said Mr Sisdivachr.

"The government may not risk reopening its borders if it is not confident enough about protective mechanisms for the whole nation."

The Russian invasion of Ukraine affects the global economy and will continue to impact the tourism industry as people with less income may not prioritise leisure trips over necessities of life, he said.

Thailand also has a role to play in travellers' political considerations, with elections coming up and more heated rhetoric creating concern among some operators, said Mr Sisdivachr.

"We should not forget the situation can worsen in just a few days, similar to a Covid outbreak," he said.

"Political parties need to remember how the country built up immunity against the virus."

The Thai economy is projected to enjoy a significant recovery as the government's decision to cancel RT-PCR testing on arrival for vaccinated tourists starting this month looks set to pave the way for a tourism-led booster, said the Federation of Thai Industries (FTI).

Thailand has lacked the huge amount of revenue generated from foreign visitors since the onset of the pandemic in early 2020 when strict travel restrictions were enforced.

The FTI expects a brighter economic outlook in the second half of this year, depending on how many foreign tourists come to the country following the easing of mandatory entry rules.

More foreign tourists mean more spending in the country, according to the federation.

"Opening the country will help the Thai economy quickly rebound at a time when businesses are still struggling against the impact of Covid-19, which has plagued the economy for over two years, as well as the effects of the Russia-Ukraine war," said Kriengkrai Thiennukul, chairman of the FTI.

Tourism can be a key booster generating up to 500-600 billion baht in economic value if foreign arrivals increase to 5-6 million, he said.

Though Covid-19 infections continue, symptoms caused by the Omicron variant are not as severe as those caused by Delta, in large part thanks to the government's mass vaccination programme, including attempts to encourage people to receive booster vaccines, said Mr Kriengkrai.

More tourism revenue is also expected to help relieve the huge level of household debt, which has increased to 90% of GDP.

Many people, especially those working in the tourism and service sectors, will have more money to pay for goods, which will eventually benefit the manufacturing sector, he said.

This spending leads to increased money circulation, which is crucial for economic growth, he said.

Mr Kriengkrai said businesses and households must learn to live with Covid-19 while the government designs a balance between measures to prevent Covid-19 outbreaks and efforts to stimulate the economy, which was weakened by past lockdown measures.