Growth cut due to inflation, slowdown

Mounting pressure from inflation, energy prices, the global economic slowdown and the prolonged conflict between Russia and Ukraine prompted the government's planning agency to lower its economic growth forecast yesterday to 2.5-3.5% for the year, down from the previous forecast of 3.5-4.5% in February. 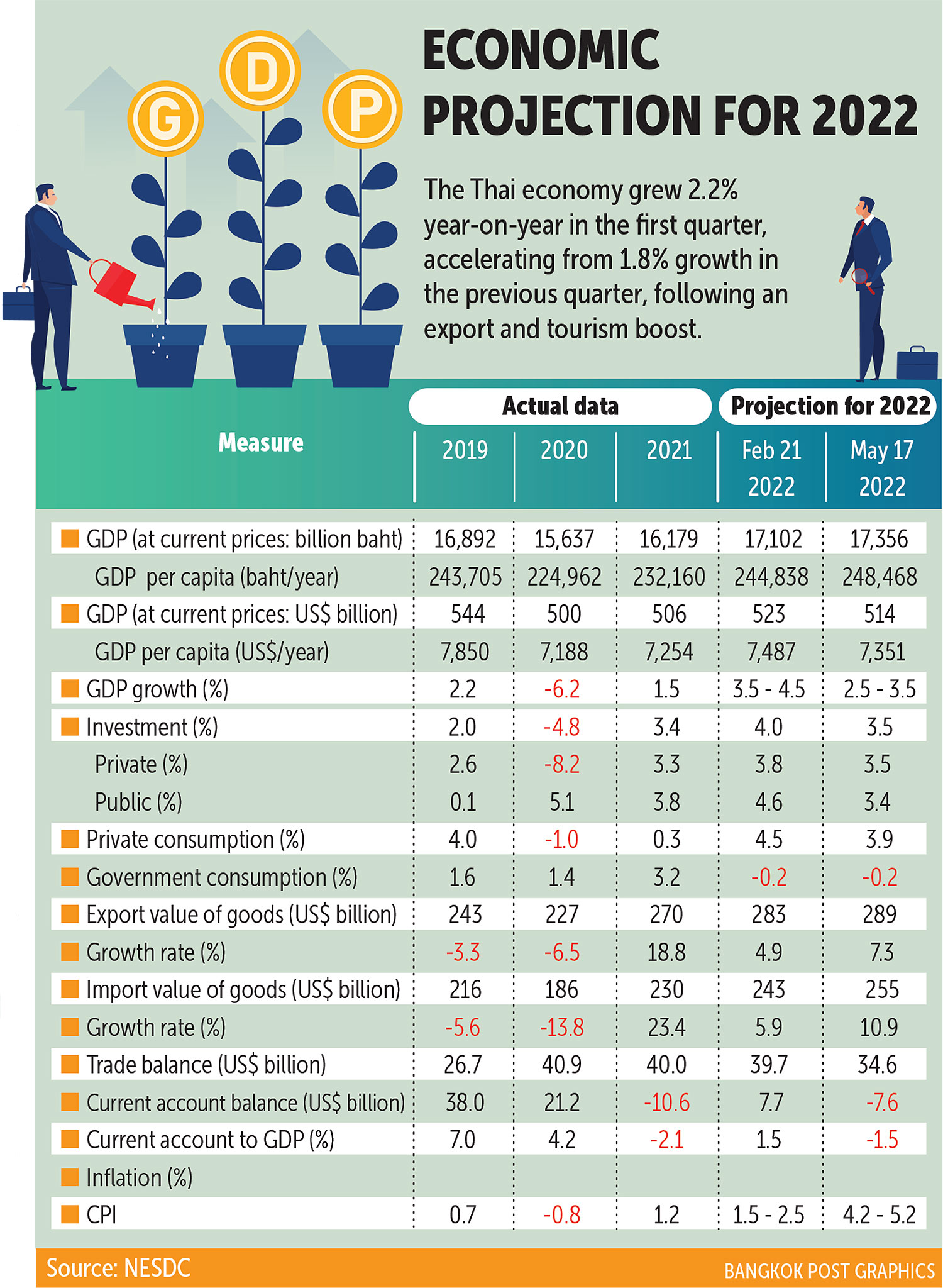 Danucha Pichayanan, secretary-general of the National Economic and Social Development Council (NESDC), said the war between Russia and Ukraine, which has triggered an energy price surge, is a big concern right now. He said the pandemic is no longer a major risk to the Thai economy.

The latest projection is based on Dubai crude oil prices of US$95-105 per barrel, which is much higher than the previous projection of $72-82 a barrel. Another factor was China's economic slowdown, said Mr Danucha.

He said for 2022, the main support factors will be improving domestic demand, the recovery of domestic tourism, and the continued expansion of exports.

The export value of goods in US dollar terms is anticipated to expand by 7.3% this year, up from 4.9% in the previous estimate, with imports expected to rise by 10.9%, up from 5.9% in the earlier forecast.

The agency expects international tourist numbers to reach 7 million this year, generating 570 billion baht worth of income, up from the 5 million and 470 billion baht forecast in February.

The NESDC said the number of foreign visitors in the first quarter this year totalled 500,000 and generated 150 billion baht, surpassing the 430,000 visitors for the whole of 2021.

Mr Danucha said economic management for 2022 needed to focus on: preventing and controlling the pandemic; resolving household debt; accommodating the market mechanism to allow prices to move in line with production costs; and providing assistance for those who are vulnerable to rising inflation.

The agency advises the government to: support domestic tourism; organise promotional events to attract long-stay tourists, especially those with high purchasing power; provide loans and subsidies to help the business sector resume operations; and uplift the nation's tourism potential and ensure the sector recovers on a sustainable basis.

According to Mr Danucha, the government also needs to: maintain the growth momentum of the export sector by boosting exports to major markets coupled with expanding to new markets with potential products; improve the quality of agricultural, food, and manufacturing products to meet international standards; utilise benefits from the Regional Comprehensive Economic Partnership as well as expedite ongoing free-trade agreement talks and prepare for future negotiations with new potential trading partners; and cushion the effects of exchange rate fluctuations and rising input costs.

In a related development, the NESDC yesterday said Thailand's GDP in the first quarter of 2022 increased by 2.2% from the same quarter of last year, following a rise of 1.8% in the fourth quarter of 2021.

These shifts resulted from the government's stimulus measures, which caused a recovery in various economic activities, and the relaxation of travel restrictions, both domestically and internationally, said the NESDC.

After seasonal adjustments, the economy grew by 1.1% from the last quarter of 2021.