Thai recovery could quicken with focus on high-value industries

Prime Minister Prayut Chan-o-cha, centre, and leaders from the public and private sectors pose for a photograph at the Better Thailand Open Dialogue seminar. The two-day seminar on May 19-20 presents an opportunity to address key issues for Thailand's economic development. (Photo: Nutthawat Wicheanbut)

Danucha Pichayanan, secretary-general of the National Economic and Social Development Council, was speaking on Thursday at the opening of the two-day Better Thailand Open Dialogue.

The event is co-hosted by the Chulalongkorn University Engineering Alumni Association, Faculty of Commerce and Accountancy Alumni Association, and Economics Alumni Association, in collaboration with the Joint Standing Committee on Commerce, Industry, and Banking. The forum allows leaders from the public and private sectors to share ideas leading to a better Thailand.

"Thailand's economic structure is not yet immunised against future risks and still depends largely on tourism and conventional manufacturing or production sectors," said Mr Danucha. "With the Covid-19 outbreaks over the last two years coupled with the ongoing threats from the Russia-Ukraine war, Thailand has to speed up economic and social restructuring to focus more on high-value industries, advanced technology, R&D, smart farming and automobiles, smart electronics, and wellness.

He said these crises are showing Thailand needs to stand on its own and focus more on the domestic economy. 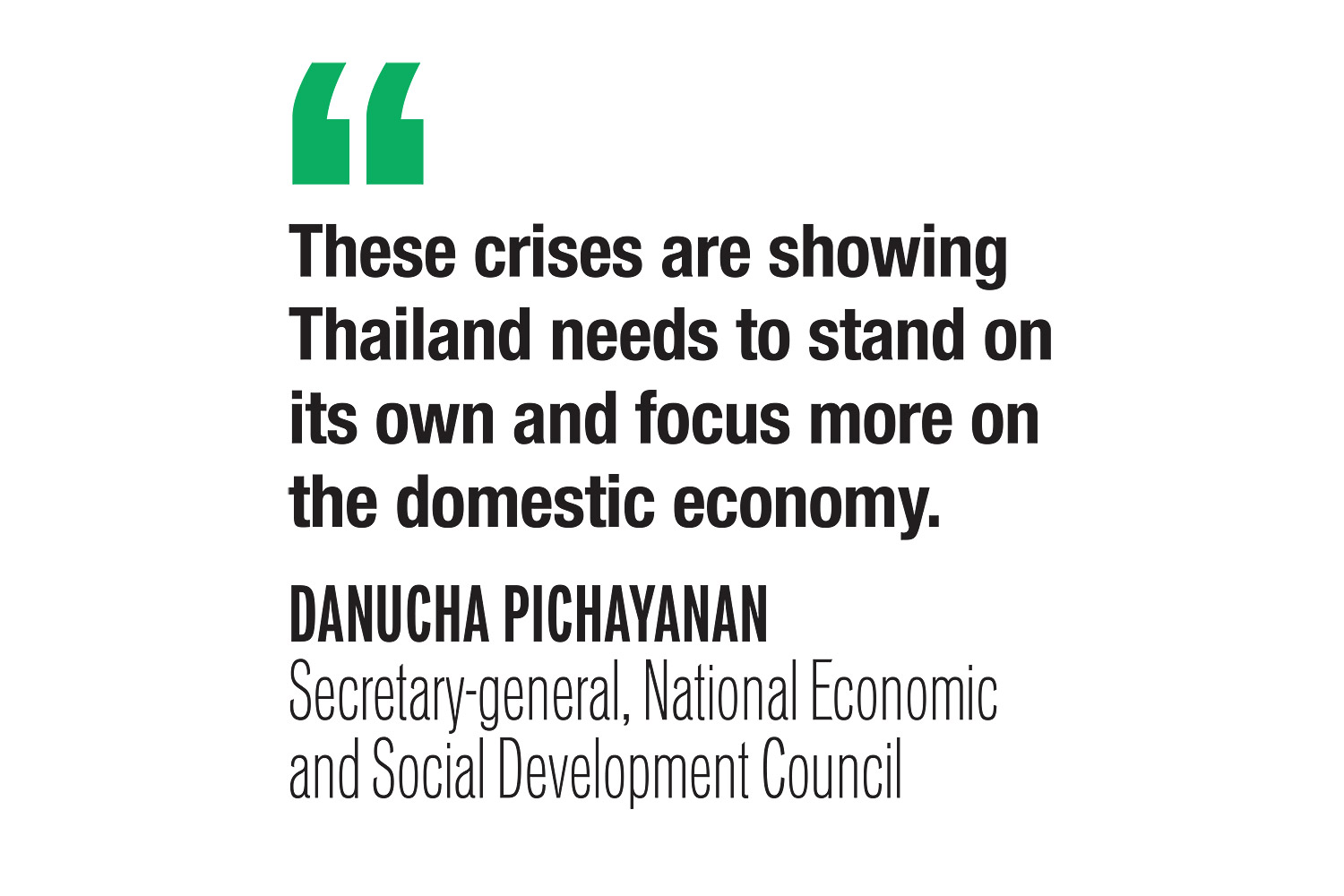 Mr Danucha said the government and all related parties must cooperate and work closely to narrow income disparity and redistribute income to people in the provinces, while large businesses and small and medium-sized enterprises should create a network to link supply chains.

The government needs to focus its assistance programmes on specific groups of poor people and support the development of a bio-, circular, and green (BCG) economy, de-carbonisation, and human resources, he said.

Mr Danucha said the government has limited fiscal space to boost the economy, with only 40 billion baht left under the 500-billion-baht loan decree.

The government issued its first emergency loan decree in 2020 to authorise the borrowing of 1 trillion baht to fund its stimulus schemes to combat the pandemic. A second decree was issued last year to allow the government to borrow an additional 500 billion baht.

Deputy Prime Minister Supattanapong Punmeechaow said he is optimistic the Thai economy will continue improving because of the government's economic stimulus measures and infrastructure development.

He said government investment in infrastructure projects reached 2 trillion baht over the past seven years, helping to improve transport and logistics systems. The next phase of infrastructure development will focus on creating better linkages to regions in the country as well as neighbouring countries, said Mr Supattanapong.

"Given the serious impact from the deadly virus outbreaks and the Russia-Ukraine war, cooperation among the public and private sectors is the most important factor to help Thailand overcome such crises," he said.

STAY IN YOUR LANE

The Bank of Thailand does not need to follow the US Federal Reserve in hiking its policy rate, instead considering internal factors for rate movement, said central bank governor Sethaput Suthiwatnarueput.

Even though the Fed signalled it plans to continue increasing its policy rate to tame the rising inflation rate, the Bank of Thailand is going to focus on local economic circumstances, he said.

The Thai economy has been gradually recovering and the central bank projects GDP growth of 3.2% this year. The institution is slated to review its forecast next month.

He said the central bank monitors the monetary policy of the Fed and other central banks. A widening spread between the US rate and the Bank of Thailand's policy rate would lead to foreign capital outflow, said Mr Sethaput, but not to a significant extent.

The Fed rate hike strengthened the US dollar against other currencies including the baht, with the Thai currency depreciating 3% versus the greenback year-to-date. This movement is in line with regional currencies, he said.

Thailand's stability against foreign factors is strong, with solid international reserves and a reasonable amount of offshore debt, said Mr Sethaput. This buffer should allow the central bank to maintain an accommodative monetary policy to support an economic rebound, he said.

"With a flexible policy in terms of both inflation and the foreign exchange rate, the bank does not need to increase the policy rate in response to the Fed," Mr Sethaput said.

He said given volatility in the global economy and money markets worldwide, Thailand's inflation rate is likely to increase further, in line with other countries.

According to the central bank's Monetary Policy Committee statement in March, the country's headline inflation is projected to be 4.9% in 2022 and 1.7% in 2023. Inflation will exceed 5% in the second and third quarters of 2022, driven mainly by rising energy prices and the pass-through of food prices. However, inflation is projected to decrease and return to the target range of 1-3% in 2023 as energy prices decline, said the committee.

Mr Sethaput said there is little chance for stagflation in the Thai economy because momentum remains for a recovery.

"Keeping the recovery trend for the Thai economy as smooth as possible is the central bank's key role," he said.

Finance Minister Arkhom Termpittayapaisith said while the Thai economic recovery is slow, it has expanded with a firm pace.

He said for the next step in the recovery, the fiscal policy direction should prioritise three areas: promotion of digital technology in implementing public policies such as state subsidy schemes; promotion of electric vehicle adoption; and strengthening of the public health system.

Mr Arkhom said the country faces an economic double whammy from the prolonged pandemic and the Russia-Ukraine war.

Tourism Authority of Thailand (TAT) governor Yuthasak Supasorn said tourism faced a major setback from the global outbreak, with foreign arrivals falling to a low point of 427,869 tourists in 2021, compared with nearly 40 million in 2019.

The situation prompted tourism agencies to come up with a survival plan to help the country rebound from the crisis, such as soft loans, which have helped 7,847 operators, as well as stimulus campaigns to boost domestic consumption such as "Moral Support", a tour subsidy for health officials and volunteers in 2020.

The TAT also introduced a new service standard under the Safety and Health Administration to ensure the safety and hygiene of locals and tourists using new practices.

Mr Yuthasak said as tourism gradually climbs up from rock bottom, the TAT aims to revive tourism revenue to 2.4 trillion baht, or 80% of the level in 2019, but with only 50% of the 2019 volume by next year.

High-value tourists are the focus, he said, with key segments categorised under a "4:3:3 composition". The first group consists of long-term wealthy foreigners, pensioners, highly skilled professionals and work-from-Thailand professionals.

Another group is divided by generation, namely Baby Boomers, Gen Z and Gen Y, who are expected to be the first movers after the pandemic subsides.

To strengthen the Thai economy, the Federation of Thai Industries (FTI) is talking with the Eastern Economic Corridor Office to set up a "security supply chain industrial estate" on the eastern coast, said Kriengkrai Thiennukul, chairman of the FTI.

"From the US-China trade war to the pandemic and the Russia-Ukraine war, countries have increasingly seen global supply chains disrupted by these events," he said.

During the Russian invasion on Ukraine, the FTI expressed concern that auto exports from Thailand might miss its target of 1 million units, following sanctions on Russia, which is a major steel producer and exporter.

There are 45 industries in Thailand and more than 14,000 companies. Around 30% of them have to import raw materials for production to sell domestically and overseas, said Mr Kriengkrai, adding these manufacturers need to continue their exports as it is the key economic engine of the country.

"Exports account for 70% of GDP and industrial items make up 80% of export value," he said.

Crowdfunding a lifeline for SMEs