Baht on a tightrope
Business

Baht on a tightrope

The currency depreciation looks great for shippers and the tourism sector, but it leads to an array of problems for importers of several items,

A man walks past a currency exchange booth in Bangkok on May 19. Somchai Poomlard

Industry leaders have urged the government to carefully manage the baht to keep its value at a rate that will benefit both importers and exporters.

The baht was valued at 34.62 per US dollar as of May 9, representing a depreciation of 3.4% since the beginning of the year, its lowest value in five years.

The dip is attributed to the conflict between Russia and Ukraine that continues to push up the prices of commodities and the inflation rate, the US Federal Reserve's recent interest rate hike, and China's worsening pandemic and its accompanying challenges for supply chains and shipping, Poon Panichpibool, a markets strategist at Krungthai Bank, said earlier.

The baht's depreciation is a boon for the export and tourism sectors, but could affect other sectors that rely on key raw material imports. 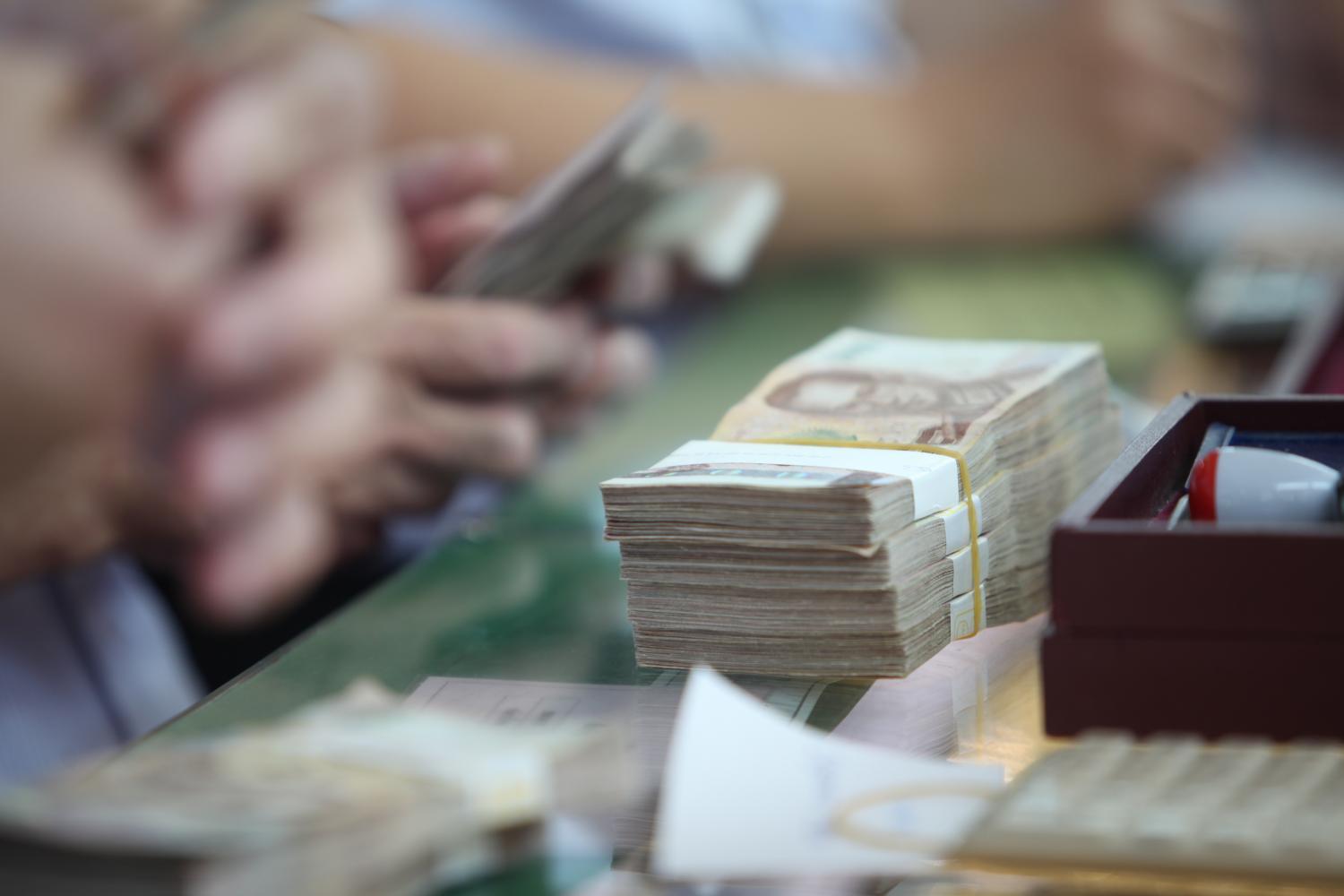 A weaker baht has some advantages, but the government must carefully manage the demand and supply of the baht to keep its value at a rate that will benefit both importers and exporters, said the Federation of Thai Industries (FTI).

Kriengkrai Thiennukul, chairman of the FTI, did not provide an appropriate value, but warned the recent depreciation against the US dollar threatens to deal a further blow to the reeling economy.

Though exporters can take advantage of the weaker baht, importers of oil and some key raw materials will bear the brunt as they have to pay more to import these products, which are currently expensive or scarce as a result of the Russia-Ukraine war, he said.

Small and medium-sized enterprises (SMEs) will be affected the most by the decline in the baht's value.

"We are worried about SMEs because they have to import raw materials and their sales are restricted to the domestic market," said Mr Kriengkrai.

"They will encounter higher production costs and need to devise risk management plans."

Many companies are coping with the shortage of raw materials by stocking up on these items or seeking them from various countries. They are concerned ongoing economic uncertainties will lead to a severe disruption of global supply chains, he said.

China, dubbed the "factory of the world", may find its raw material exports bogged down if Beijing implements further lockdown measures to contain the spread of the virus, while the impact of the Russia-Ukraine war and sanctions on Russia are causing another hindrance to trade, said Mr Kriengkrai.

The baht typically falls and rises within a range against the greenback, but the authorities must ensure the fluctuations are in line with the currencies of neighbouring countries to maintain Thai competitiveness in the global market, said Mr Kriengkrai. 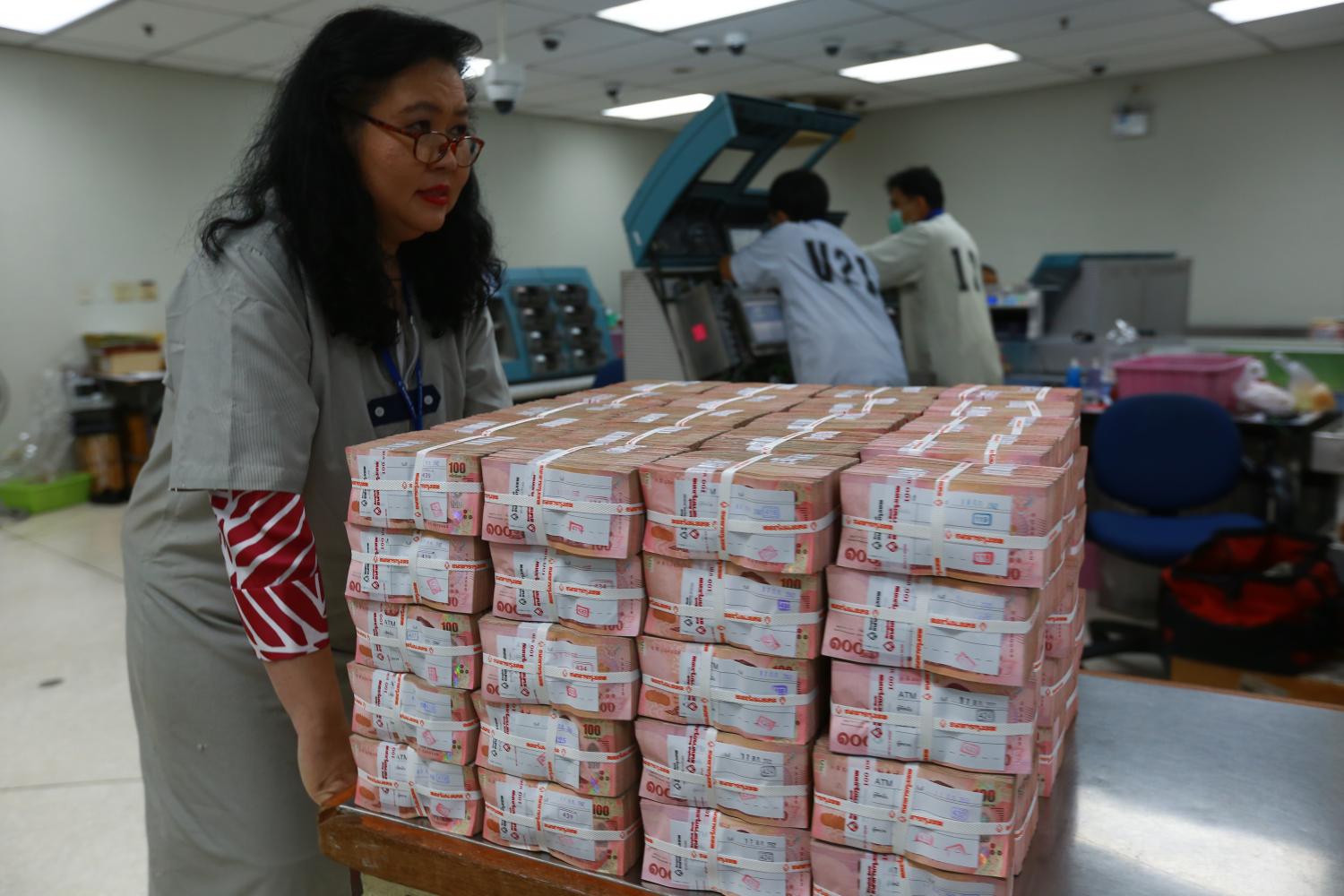 Amonthep Chawla, head of research at CIMB Thai Bank (CIMBT), forecasts the US dollar to continue rising compared with other currencies including the baht because the Fed will continue to increase its policy rate throughout this year.

The Fed is expected to increase the policy rate another 50 basis points each in June and July. After that, the degree of the rate hike depends on inflation rate containment, said Mr Amonthep.

The Fed increased the policy rate by 50 basis points in May, the highest hike in 22 years after the US inflation rate rose to 8.3% in March, a 40-year peak.

The US inflation rate briefly declined to 8.1% in April, so the Fed rate hike in the second half of the year should not reach 75 basis points, he said.

Mr Amonthep said a wider spread between the Fed's policy rate and other central banks including the Bank of Thailand would impact foreign capital outflow to US markets, especially from emerging markets such as Thailand.

Such a scenario would support the US dollar's appreciation compared with other currencies.

CIMBT forecasts the baht to hover around 34.50 against the dollar around the middle of this year, gradually picking up in the second half, supported by tourism income in line with improving offshore arrivals.

However, the continuing Russia-Ukraine war is a key risk factor exacerbating uncertainties for the economy, money markets, the inflation rate and energy prices worldwide.

If aggressive rate hikes by the Fed cannot drive down the inflation rate, the baht could weaken further than the existing projection, he said.

According to Kasikorn Research Center, the baht's depreciation is normal and not particularly worrying because it was caused by external factors and is in line with most Asian currencies, which dropped on concerns the Fed will implement a more aggressive monetary policy tightening to contain spiralling US inflation.

The research house believes the Bank of Thailand will be able to mitigate any serious effects from a weakening baht as it is closely monitoring the situation.

Kasikornbank sees the baht moving in a range of 34.20-35.00 baht per dollar this month. 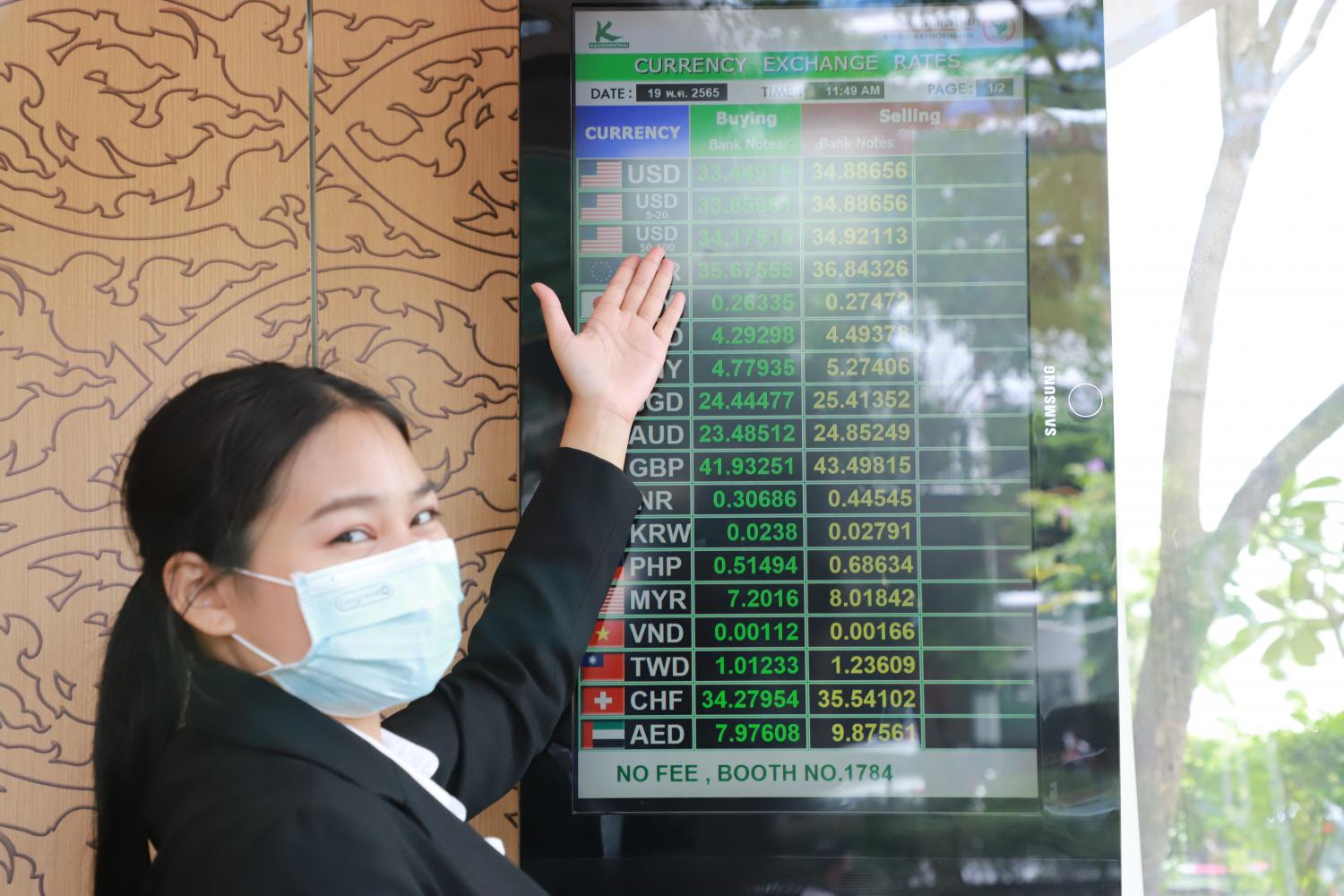 An employee presents a forex board at a currency exchange. Somchai Poomlard

"Around 34.50 baht per US dollar is the most appropriate rate for exporters. We feel confident Thai exports can be competitive compared with products priced in other currencies," he said.

"The appropriate range for the baht is 33.50 to 34.50 per US dollar. If the currency depreciates down to 35 baht, it would negatively affect imports, resulting in more expensive imported goods."

According to Mr Chaichan, the government needs to take into account both exporters' and importers' concerns in trying to reach a suitable rate to ease the impact on the economy. 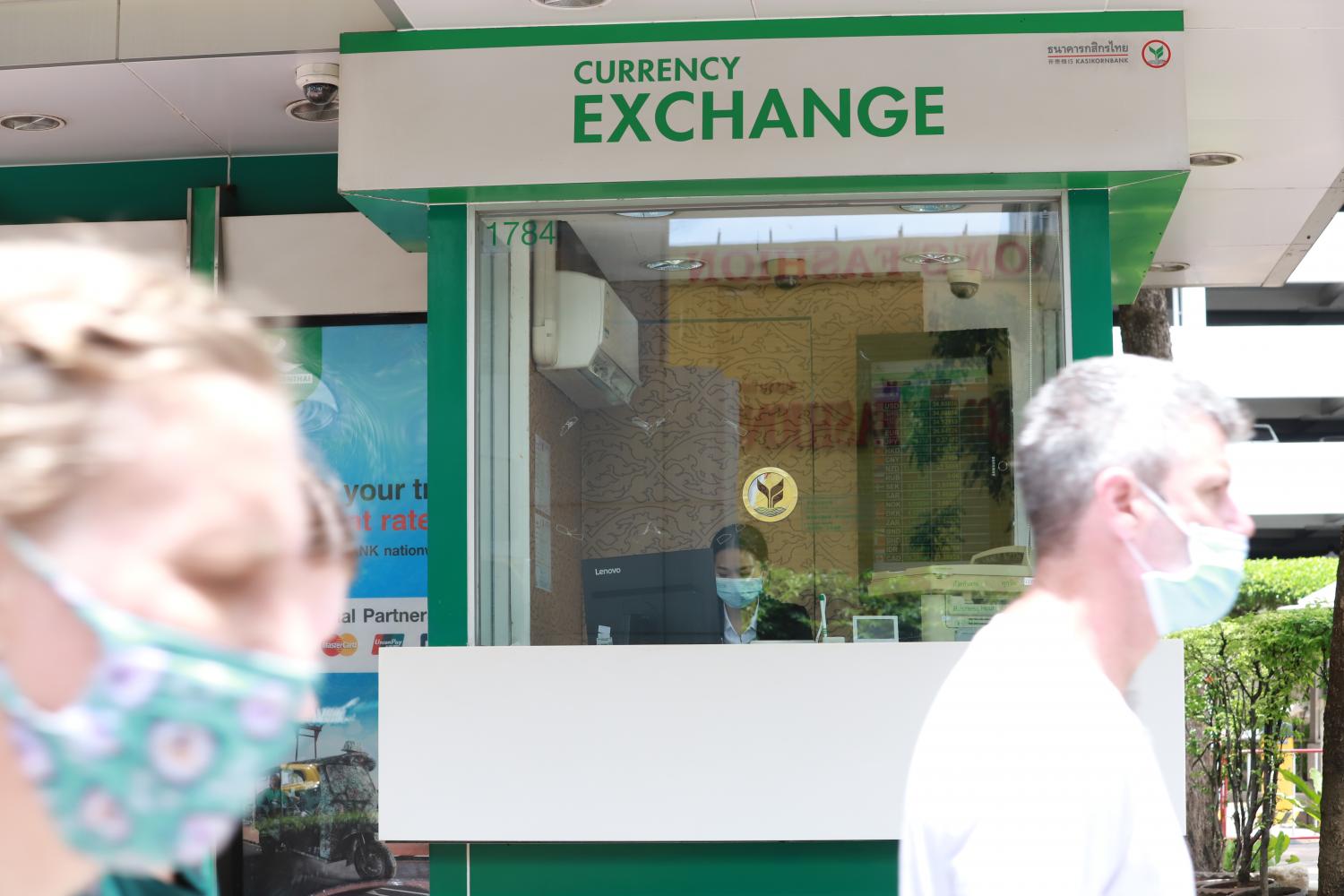 A man and a woman walk pass a currency exchange booth of Kbank in Bangkok on Thursday May 19, 2022. Somchai Poomlard

Somsak Pejthaveeporndej, chief executive of IT distributor VST ECS Thailand, said the weak baht is pushing up the cost of imported technology products, which are already pressured by a shortage of chipsets.

The shortage of chipsets has caused an increase in the prices of IT products, particularly high-end items such as networking, storage and cybersecurity devices, said Mr Somsak.

He said the company is managing risk by currency hedging with banks and discussing the matter with suppliers.

For government projects, the company will attempt to fix exchange rates with suppliers for 90 days, said Mr Somsak.

"For the IT consumer segment, notebooks have seen a rise of 1,000-2,000 baht in prices on average because of the chip shortage, but we have not raised our prices as we ordered products before the depreciation," he said.

Mr Somsak urged the Bank of Thailand to intervene to prevent the currency from depreciating to 35-36 baht per dollar, which would also drive up fuel costs.

"We offer free delivery services to resellers. If the weaker baht eventually causes a rise in fuel costs, we may ask the resellers to absorb this in the short term as logistics providers would increase their transport fees," he said.

According to Mr Somsak, the company is maintaining its business growth this year because of the rise in demand for IT products, particularly from enterprises that are making orders quickly based on fears of a shortage.

"If they delay making a decision, the products they want may not be available by the time they need to use them," he said. 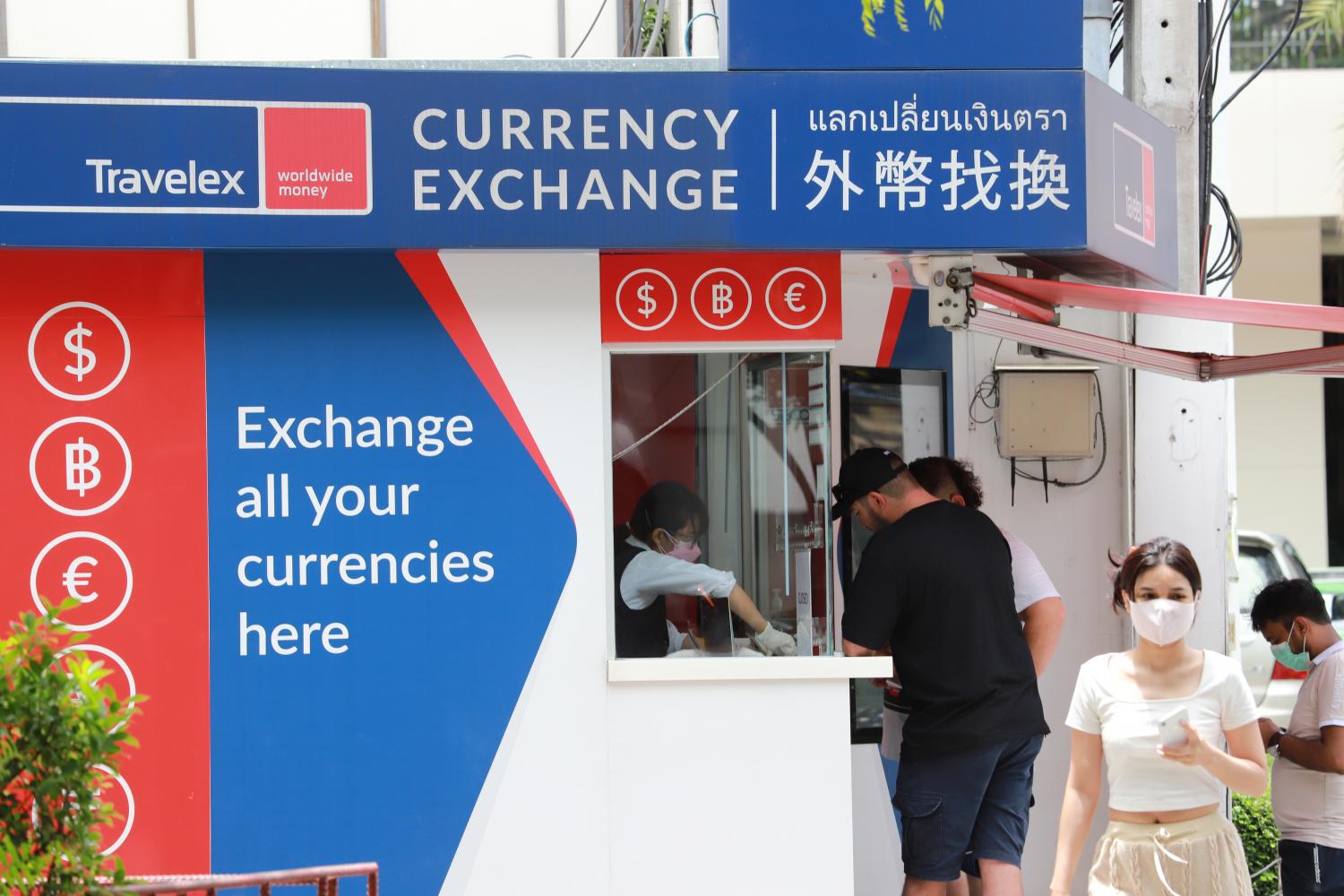 Sisdivachr Cheewarattanaporn, president of the Association of Thai Travel Agents, said the baht's depreciation certainly benefits tourism as tourists can spend less for the same products and services while travelling in Thailand.

The promise of a cheaper trip might persuade tourists to travel, which can help accelerate the recovery from the tourism slump the past two years, said Mr Sisdivachr.

He said even though the prices of consumer goods in Thailand are more expensive because of inflation, tourists who stay for 5-10 days would be unfazed by rising costs.

However, the economies of some tourism source markets are still not as healthy as they were before the pandemic because of the impact of the global outbreaks, which could limit arrivals, said Mr Sisdivachr.

He said other factors to watch include the Russia-Ukraine conflict and the continued threat of inflation, which directly affects the travel sentiment of foreign tourists.

"The number of travellers gradually increased after further loosening of travel restrictions," said Mr Sisdivachr. "The outlook for the tourism sector might not improve overnight solely based on from the baht's depreciation."

He said the national fiscal position is quite stable, which would limit the amount the baht would depreciate in the medium term. Thailand is not in the same position as during the "Tom Yum Kung" crisis of 1997, during which the baht came under attack and depreciated sharply to above 50 to the greenback, said Mr Sisdivachr.

He advised tourism operators to monitor the currency situation.

Vichit Prakobgosol, vice-president of the Tourism Council of Thailand, said the depreciation of the baht would help accelerate travel decisions and generate more jobs and revenue for operators who serve the inbound market.

Mr Vichit said this could lead to a short-term benefit until the middle of the year, but businesses would face a greater impact from soaring oil prices, which could worsen if energy import costs increase from the currency depreciation.