Thai exports grew for a 14th consecutive month in April, albeit at a slower pace than a month earlier, despite pressure from a host of factors.

Negative factors including the ongoing war in Ukraine and Western sanctions against Russia have caused global supply chain disruptions, while inflation is rising in many countries and China's economic slowdown is being complicated by its zero-Covid strategy.

The Commerce Ministry said yesterday the customs-cleared value of Thai exports in April grew by 9.9% year-on-year to US$23.5 billion, with imports increasing by 21.5% to $25.4 billion, resulting in a trade deficit of $1.90 billion.

Exports in the real sector (excluding gold, oil-related products and weaponry) rose by 6.9% last month, easing from 8.9% growth in March. 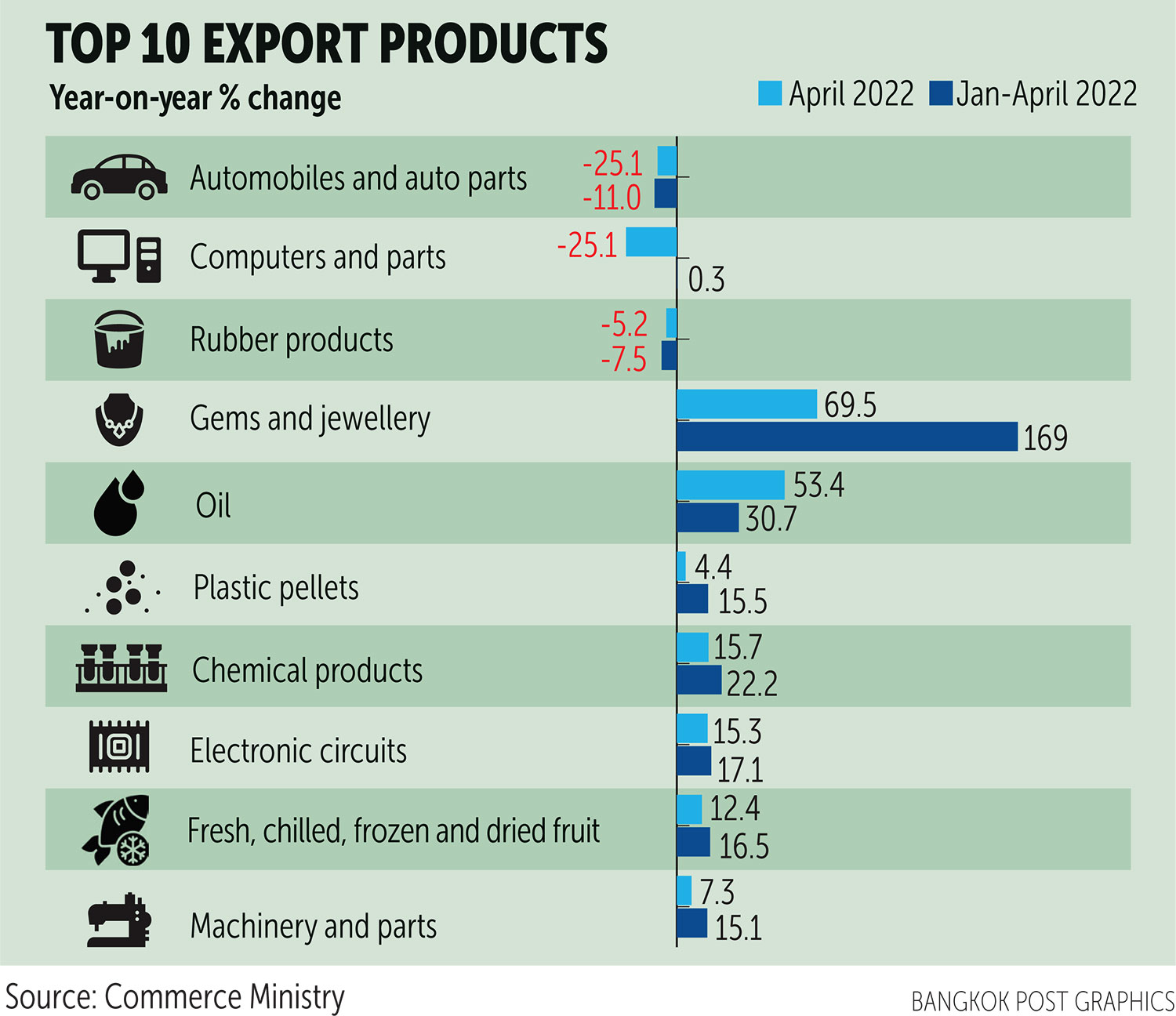 Products that expanded well in April included those whose export value increased in line with global energy prices: agricultural and food products, foreign demand for which increased as people stocked up on essential goods; electronics, electrical appliances and durable goods, which were in greater demand as a result of the economic and employment recovery; and medical products such as medical devices and pharmaceutical products.

"Key factors for Thai export expansion in April were derived from robust global demand, particularly for agricultural and agro-industrial products such as cassava products, rice, animal or vegetable fats and oils, sugar and pet food, which grew by 24.7%," said Commerce Minister Jurin Laksanawisit.

According to Mr Jurin, exports are expected to continue growing for the remainder of 2022 as agricultural and food product trade tends to rise when trading partners want to ensure food security. In addition, exports of industrial products are likely to expand well, including intermediate goods such as iron, steel, and oil-related products (plastic resins, chemicals, refined oils, liquefied petroleum gas and natural gas), he said.

More importantly, he said the baht's depreciation was conducive to export growth.

One concern is rising inflation in major trading partners could dampen exports in the future and should be monitored, said Mr Jurin.

Chaichan Charoensuk, president of the Thai National Shippers' Council, said the country needed to accelerate exports to new markets and the Middle East as the impact of China's zero-Covid policy had taken a toll, as highlighted by April's 7.2% decline for Thai exports to China.

Relatively high freight rates is another negative factor for Thai exports, he said.