Don't turn off the tap just yet
Business

Don't turn off the tap just yet

Businesses want a long-term economic plan down the line, but still cling to state stimulus measures

People queue to collect 5,000-baht cash handouts at a Krungthai Bank branch under the "Nobody will be left behind" campaign in 2020. (Photo: Varuth Hirunyatheb)

Whether the government should bid farewell to economic stimulus measures became a source of debate after the topic was raised by an economist at Thailand Development Research Institute (TDRI).

As Thailand relaxes more measures aimed at tackling Covid-19, which is set to be reclassified as an endemic disease in July, the government should start shifting away from economic cures and the stimulus mode that has been in place for two years, moving towards a serious push for economic restoration, according to Nonarit Bisonyabut, a research fellow at TDRI.

He said the state's dwindling budget needs to be spent more wisely, after 1.5 trillion baht in debt was incurred by the government following an emergency loan decree in 2020 to borrow 1 trillion baht, and a second decree to borrow an 500 billion last year. These were part of the state's efforts to deal with the economic impact of Covid-19.

Businesses agree with the need for novel efforts to tackle the country's economic woes, but they still view stimulus packages as a necessary tool in the short term.

Sanan Angubolkul, chairman of the Thai Chamber of Commerce, said additional economic stimulus measures as well as efforts to help reduce the cost of living for consumers remain necessary to shore up economic growth.

According to Mr Sanan, although the government has gradually relaxed strict measures to contain Covid-19 outbreaks, including the decision to scrap the Test & Go entry scheme on May 1 and ditch the Thailand Pass requirement for Thai nationals returning from abroad by air from June 1, the Thai economy is unlikely to recover quickly because the country remains restrained by rising inflation and goods prices, driven by the surge in energy prices.

"People may start spending more, but it will still be far less than during normal times. The government still needs to stimulate consumer spending on a continuous basis to support the momentum of economic recovery," he said.

Get to the point

"The government should directly disburse the remaining budget from existing tourism stimulus schemes to tourism-related agencies and the private sector to attract more tourists from both international and domestic markets, instead of using the same co-payment method," said Chamnan Srisawat, president of the Tourism Council of Thailand (TCT).

The current measures are inadequate to build momentum for the whole industry as the "We Travel Together" subsidy campaign mainly supports hoteliers, while "Tour Teaw Thai" is geared towards tour operators and has proven to be ineffective in stimulating domestic trips, he said. 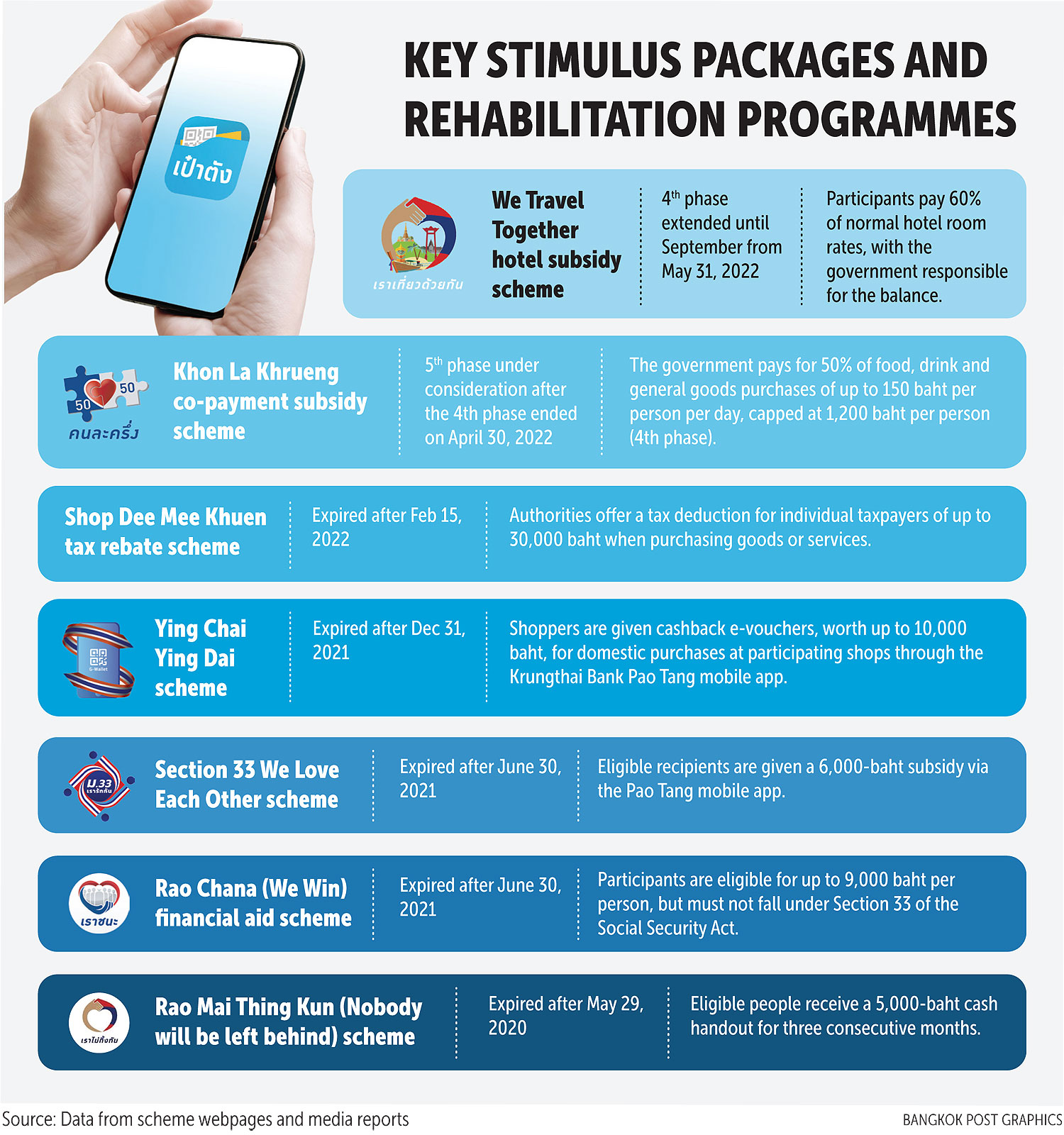 The adoption of a "hard sell strategy", such as a subsidy for charter flights of around 100,000-200,000 baht per flight, would help reach the target of 1-2 million inbound tourists per month, as international tourists would directly benefit from a reduction in their expenditure, he said.

Mr Chamnan said a budget should also be allocated to agencies such as the Thailand Convention and Exhibition Bureau for the Mice (meetings, incentives, conventions and exhibitions) segment and the Designated Areas for Sustainable Tourism Administration to distribute more income to local communities or second-tier provinces.

As domestic tourism plays a key role in spurring demand, the TCT would like to see the government budget help create demand directly by supporting 2,000-3,000 tour buses per month in five regions.

He said many tour bus operators have lost their livelihoods over the past two years. Direct support would help stimulate revenue, while tour operators who arrange tour services would also be allowed to benefit, said Mr Chamnan.

He said more than 7,850 tambon administrative organisations nationwide are considered another potential segment for tourism as they are responsible for their own local budgets.

These groups can generate more trips, unlike the majority of Thais who have less purchasing power, said Mr Chamnan. 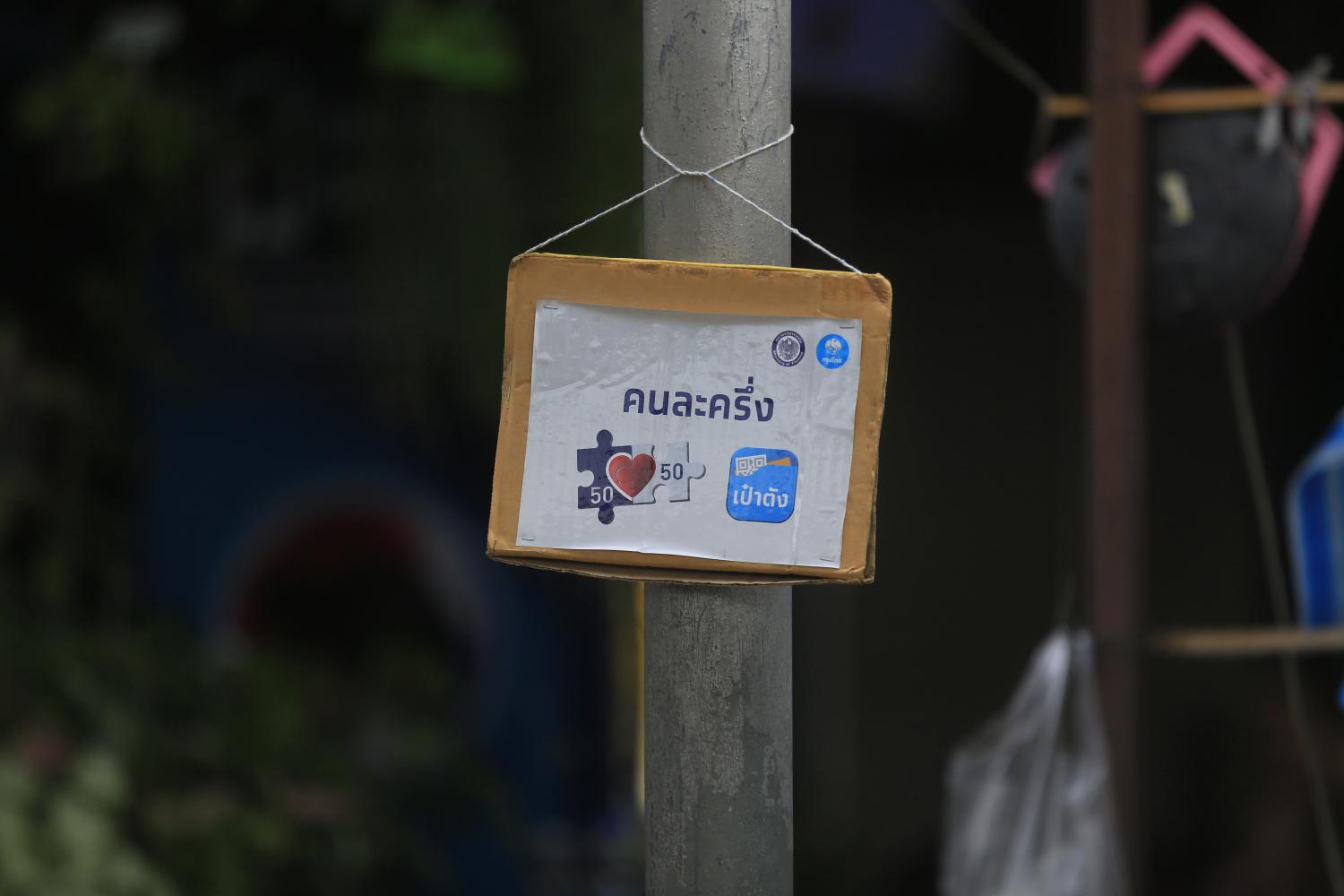 Somchai Lertsutiwong, chief executive of Advanced Info Service (AIS), the country's largest mobile operator by subscribers, said government assistance for people in the provinces and labourers is still essential during this difficult time.

He said a huge number of labourers still want government support via remedy measures to help pay for their daily costs. Household debt continues to mount in Thailand.

"Some remedy measures for provincial folks and labourers are still needed, despite the government's limited budget, to help ease people's cost of living as inflation is increasing," said Mr Somchai.

Small and medium-sized enterprises (SMEs) are bearing the brunt from the current inflation hike, he said.

To guide an economic recovery, the government should push various state projects while spending on campaigns aimed at boosting people's income, such as organising training to enhance people's knowledge and job skills, Mr Somchai said.

Yet the government must be careful in its spending, not targeting outlays for groups it is affiliated with, he said.

Mr Somchai said to help affected businesses, the administration should categorise them according to the severity of the impact on them, then provide them with appropriate assistance measures.

The assistance should include a co-payment campaign between the government and SMEs, as well as discussions with banks to ease the burden of expenditure shouldered by SMEs during this difficult period, he said.

"The country's economic recovery is a bet on how well measures are implemented, not just a short-term solution," Mr Somchai said. 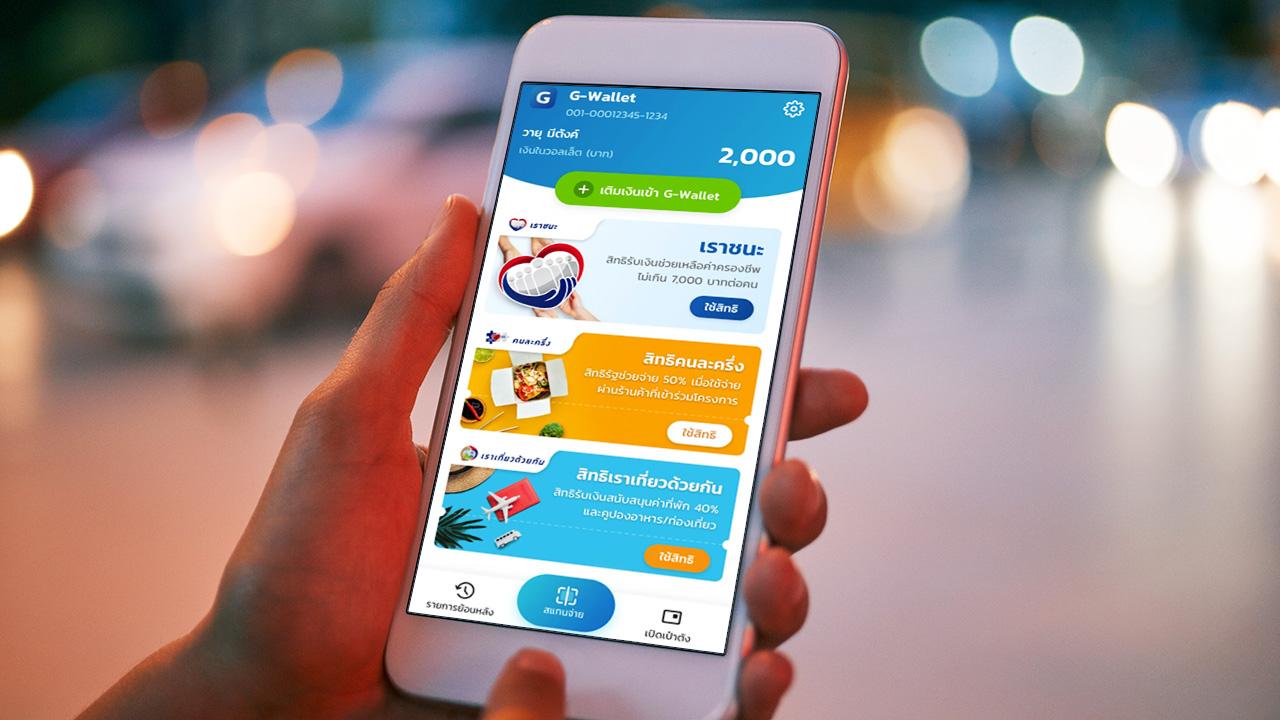 A smartphone displays the Pao Tang app portal with the government stimulus schemes, including "Rao Tiew Duay Kan" or "We Travel Together" subsidy scheme.

The Federation of Thai Industries (FTI) said the government should start to think seriously about a long-term fight against economic malaise after easing Covid-19 measures.

Without long-term measures to address economic problems, the government will not be able to escape the economic impact of the pandemic, said the federation.

While long-term economic packages are needed to survive the risks caused by the pandemic and the Russia-Ukraine war, chairman of the FTI Kriengkrai Thiennukul said short-term stimulus measures are still important.

"Measures such as the 'Khon La Khrueng' co-payment subsidy scheme are good and must continue because they provide a quick injection of money," he said.

Mr Kriengkrai previously called on the government to continue to boost consumer purchasing power through its stimulus programmes, including a fifth phase of the co-payment subsidy scheme and the extension of the We Travel Together hotel subsidy scheme.

He said these measures help reduce the cost of living for the public, attributed to surging global energy prices. However, they cannot last forever as the government has a limited budget and plans to spend for other purposes, including subsidising diesel prices to help ease logistics, transport and manufacturing costs.

When tourism begins to recover, following more relaxed entry rules for foreigners, the government must consider what to do next to increase consumer income and strengthen the economy, he said.

"Pubs and bars are going to reopen, helping to stimulate the economy," said Mr Kriengkrai.

He recommended the government come up with plans to further support economic activities that benefit from the easing of measures to contain the spread of Covid-19.

The government announced earlier that pubs, bars, karaoke bars, massage parlours and similar night entertainment venues will be allowed to reopen in 31 provinces from June 1, but they are required to close at midnight. 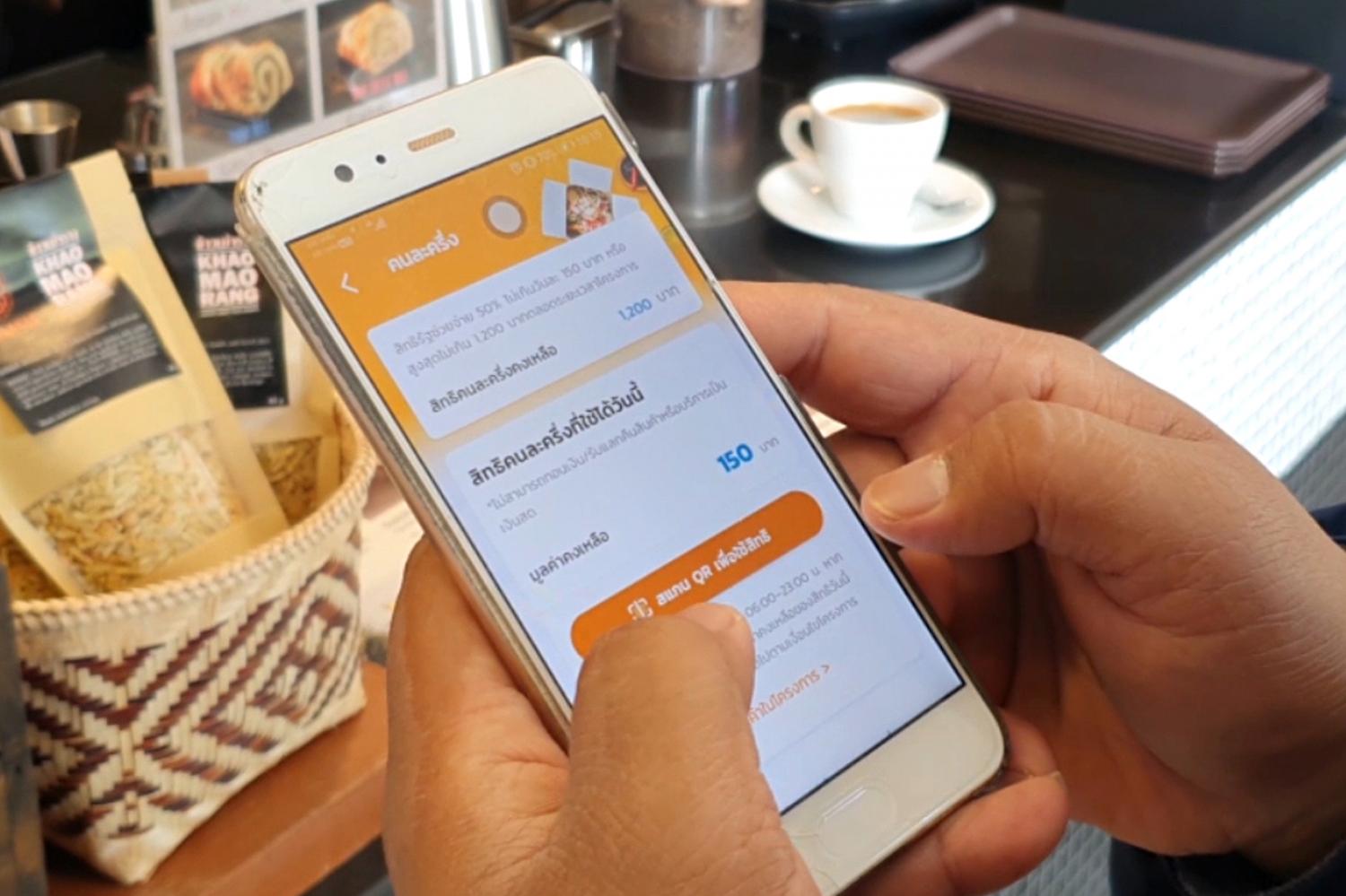 The FTI also wants the government to launch schemes to help unemployed people get jobs. Such schemes would ensure more money circulates in the country because when people earn more, they are likely to spend more, said Mr Kriengkrai.

In the long term, more employment will strengthen the Thai economy without the need to frequently depend on populist policies, which can affect the fiscal status of the country, he said.

Authorities must prioritise jobs and clearly understand who will be the target groups for their economic measures.

"The government must be able to identify what businesses or careers need help first," said Mr Kriengkrai.

"Without suitable long-term solutions, the government will be trapped by old problems, unable to make any progress."

In a survey of 1,320 enterprises in 45 industry clubs under the FTI in April, the domestic economic situation was among the top four concerns among manufacturers.

The Thailand Industry Sentiment Index (TISI) fell to 86.2 points in April from 89.2 in March due mainly to the global surge in oil prices, driven by Russia's war in Ukraine as well as higher inflation.

The drop in the TISI last month followed the biggest increase in 25 months in March, according to the FTI. 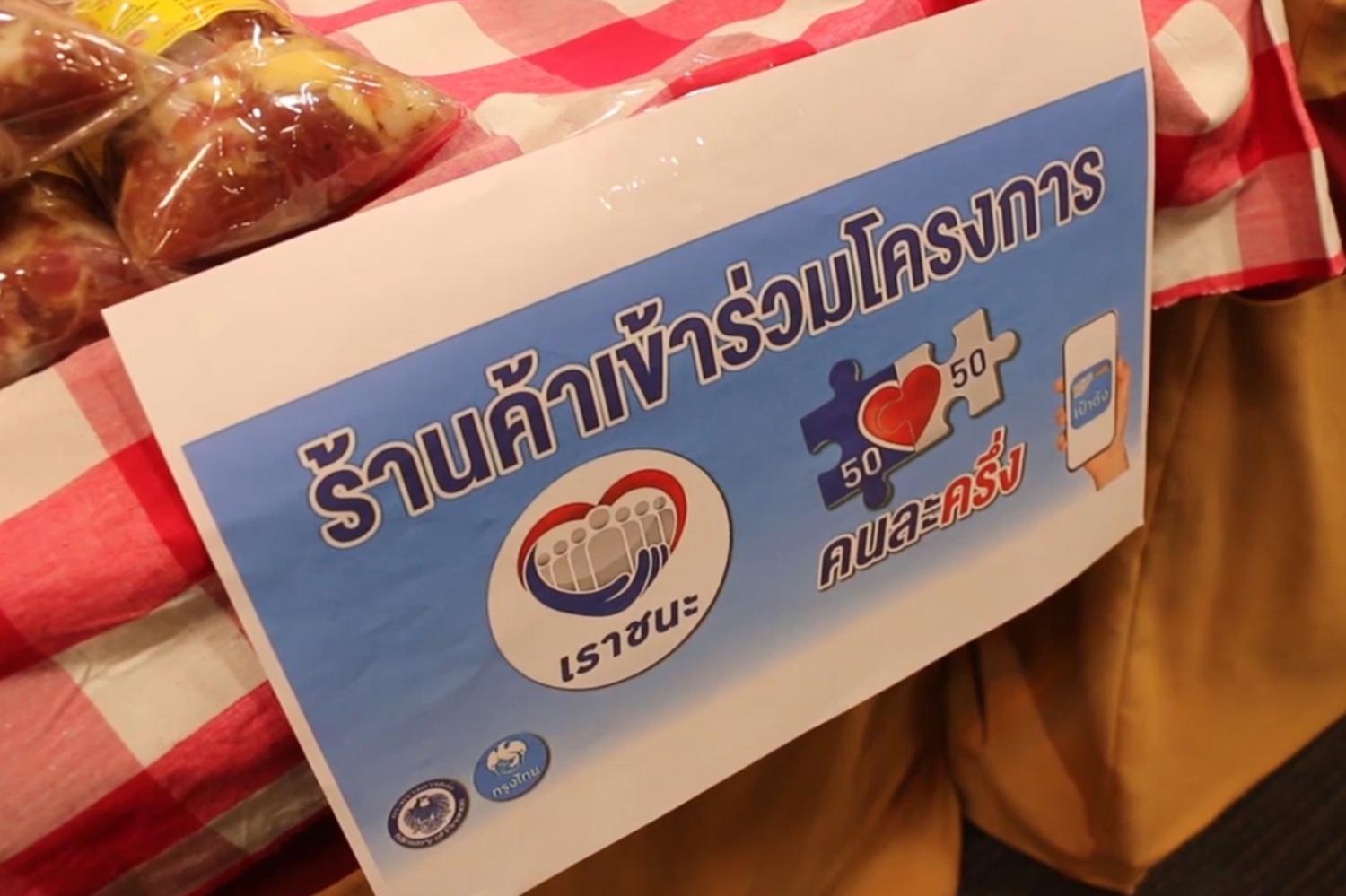 A sign of the government's Khon La Khrueng co-payment subsidy scheme is advertised at a store. Chakkrapan Natanri

He said responsible economic agencies including the Bank of Thailand, the Finance Ministry, the Fiscal Policy Office, the NESDC and Deputy Prime Minister Supattanapong Punmeechaow are scheduled to meet this week to consult on additional measures.

Mr Danucha said the government needs to consider appropriate measures for eligible groups and whether to extend measures to ease the burden on households and micro-business owners following a spike in the cost of living prompted by higher fuel prices.

Additional measures, once approved, would be implemented in the third quarter, he said.

According to Mr Danucha, additional measures would be financed by 47 billion baht remaining from the 500-billion-baht loan decree and by this year's central budget.

The NESDC is bullish on Thai economic prospects in the latter half of this year, especially in the tourism sector.

"The key problem is the higher cost of living caused an inflation hike and spike in energy prices," he said.

"Any additional new measures may be targeted to only special groups."

Mr Danucha declined to comment on whether the government would introduce a fifth phase of the Khon La Khrueng co-payment subsidy scheme.

"If the economy recovers, assistance measures may not be necessary because the government doesn't want the public to become addicted to them," he said.

Pornchai Thiraveja, director-general of the Fiscal Policy Office, said earlier the government still needs to run a budget deficit in the short and medium term to support the economic recovery while dealing with the impact of the pandemic.

In the long term, the government will pursue a balanced budget, he said.

When the economy fully recovers, the government can reduce the budget deficit and create a balanced budget, said Mr Pornchai.