While the state planning unit reports that unemployment is improving, others remain sceptical

Job seekers search for work at a job fair in Bangkok. According to the NESDC, the unemployment rate dropped to 1.53% in the first quarter of this year, or 610,000 jobless, from 1.64% in the fourth quarter of 2021. (Photo: Apichart Jinakul)

The government's planning unit, the National Economic and Social Development Council (NESDC), reported on May 23 Thailand's unemployment rate dropped in the first quarter to its lowest level since the start of the pandemic, boosted by higher employment in both the agricultural and non-agricultural sectors, as the economy gradually recovers.

The rate was the lowest since the 1.03% recorded in the first quarter of 2020 before the Covid-19 pandemic hit the economy.

But doubts linger whether the labour market has really improved now that the overall economy is facing a number of major risks such as mounting pressure from inflation, rising energy prices, the global economic slowdown and the protracted conflict between Russia and Ukraine.

Too soon to enjoy

Tanit Sorat, vice-chairman of the Employers' Confederation of Thai Trade and Industry (EconThai), said the NESDC's recent report on the lower unemployment rate in the first quarter of this year does not accurately reflect the number of the jobless in troubled business sectors hit hard by the coronavirus outbreaks.

The data has not been updated and is only based on a survey conducted by the National Statistical Office under the Digital Economy and Society Ministry, said Mr Tanit. 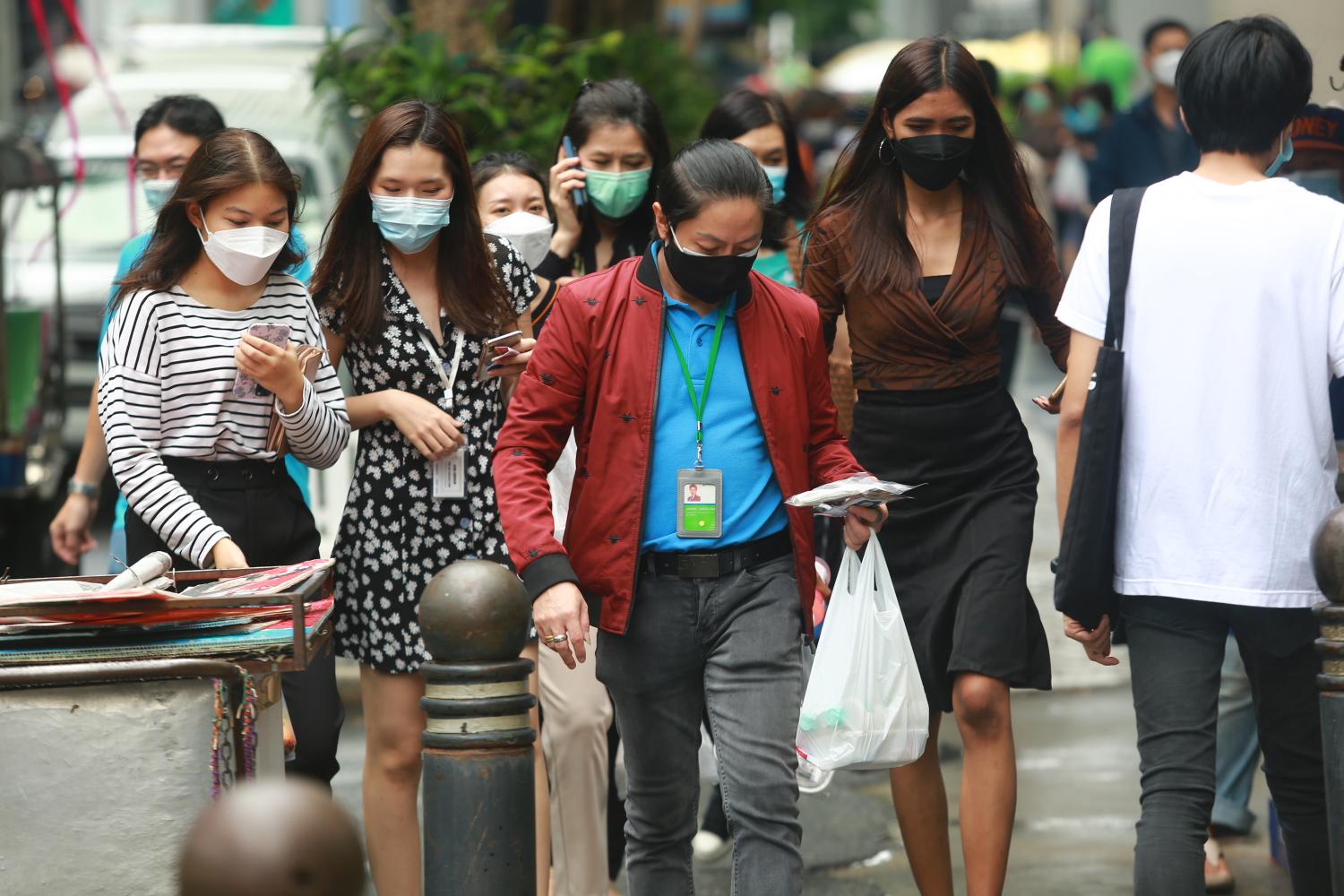 The National Statistical Office includes workers with less than one working hour and pay lower than the daily minimum wage in its calculation, so there seem to be many employed people in the country, according to Mr Tanit.

This group of people work at home or are farmhands.

"The NESDC made the employment rate in Thailand look as if it is recovering, but actually it has yet to recover," he said.

In fact, up to 400,000 workers under Section 33 lost their jobs since the first wave of Covid-19 in 2020 and the situation has not significantly improved, said Mr Tanit, citing the Social Security Office's report issued in March.

Many businesses were permanently or temporarily shut down as a result of lockdown measures imposed to contain the spread of the highly contagious virus.

To have a clear picture of the unemployment situation, around 400,000-500,000 new graduates per year must be factored in. Many of them still struggle to find work, he said.

Employment in the tourism and service sectors has also not fully recovered because Thailand just began to reopen late last year and gradually relaxed measures against Covid-19.

Mr Tanit believes the employment rate will slowly improve as the government has decided to allow more businesses to resume operations, including pubs, bars and night entertainment establishments.

Kriengkrai Thiennukul, chairman of the Federation of Thai Industries, does not totally disagree with the NESDC's findings. He said results of the easing of lockdown measures and the reopening of the country may somewhat make the employment rate look better.

These will cause businesses to recruit more workers to serve tourists, he said.

"Many businesses also need migrant workers to do jobs, including those ignored by Thai people," said Mr Kriengkrai.

EconThai's unemployment rate projection differs from those created by state agencies such as the Labour Ministry and the NESDC, based on National Statistical Office data and the definition of the International Labour Organization (ILO).

The ILO defines the unemployed as people who are without work or work less than one hour per week. 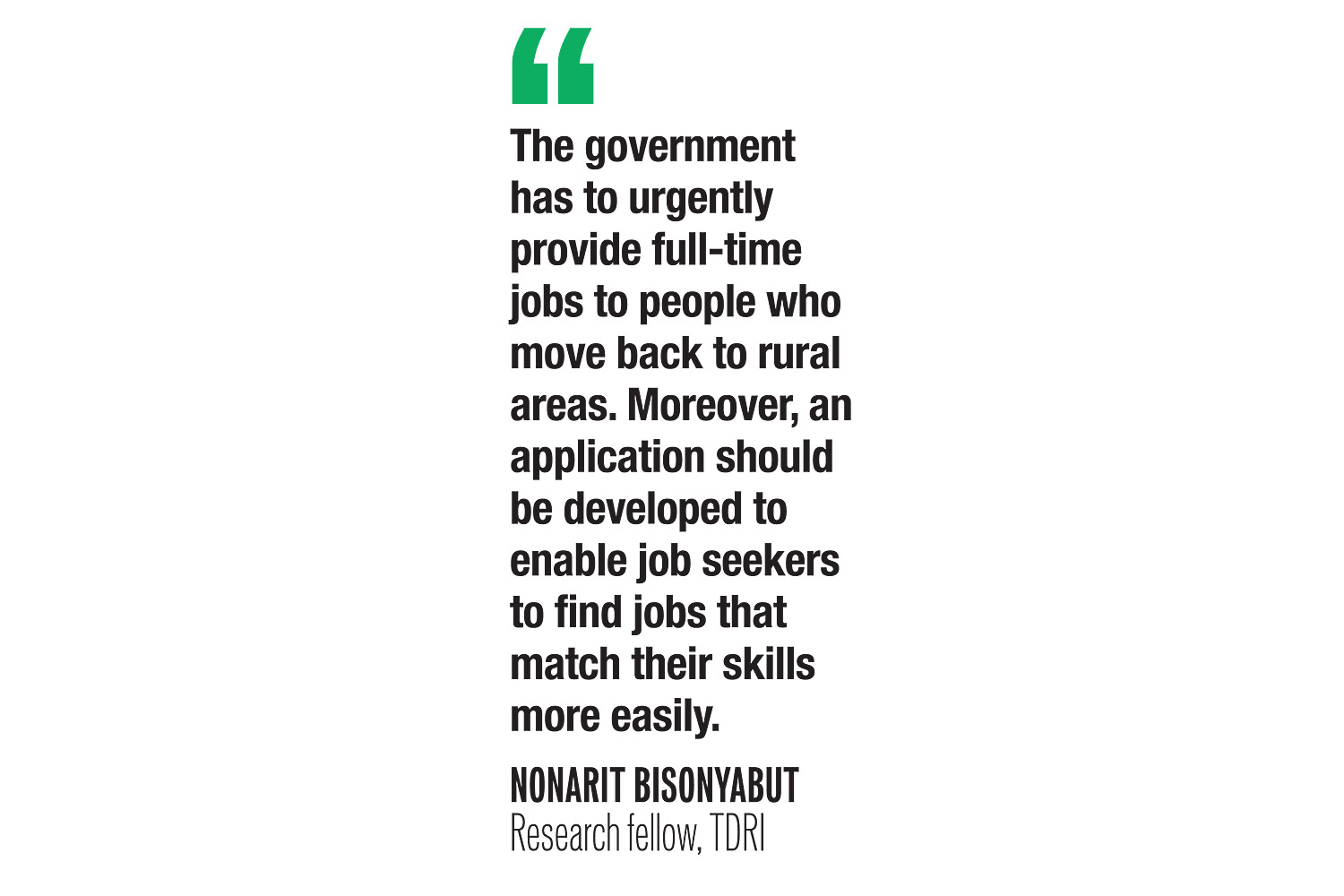 Generally, people who work for one hour per week are labourers in the farm sector.

However, the government's planning unit also uses other statistics such as the number of laid-off workers who apply for unemployment benefits from the Social Security Office.

An underemployment rate is also reported. Underemployment refers to workers who work between 0-20 hours. They are not unemployed, according to the Labour Ministry's definition.

Chamnan Srisawat, president of the Tourism Council of Thailand, said that despite the lower unemployment rate in the first quarter, the employment situation in the tourism sector remains in the doldrums.

"The most important issue that the tourism sector wants from the government is no longer financial assistance, but the sustainable way to stimulate employment rate in this sector is to have a consistent and healthy international market," said Mr Chamnan.

"The country's reopening might enable businesses to restart, but the government still has to be responsible for preparation on the supply side to ensure that the country can welcome tourists with impressive standards. Tourism workers need support to engage in upskilling programmes, particularly on digital and languages."

He said Bangkok's new governor should also be a leader to present plans on the distinctive identity of each area, capitalising on their unique products, such as food, culture, shopping and medical tourism to create tourism activities.

"Tourism and gastronomy are quick wins for the Thai economy which could help increase the employment rate in this sector in the end," Mr Chamnan said.

Danucha Pichayanan, secretary-general of the NESDC, insisted the employment situation is improving thanks to the recovering economy and the relaxation of strict measures to cope with Covid-19 by the government.

But he admitted overall employment within this year still faces a spate of risks, notably from the fragile global economy, the impact of the Russia-Ukraine war, supply chain disruption and the high inflation rate.

Thailand's annual unemployment rate is about 1% on average.

Mr Danucha said it also remains difficult to predict whether employment will bounce back to the normal rate of 1% within this year because of the global economic uncertainties brought about by the protracted conflict between Russia and Ukraine and trade and economic sanctions against Russia by Western countries.

There were only 500,000 foreign arrivals in the first quarter compared with 9-10 million before the Covid-19 crisis.

Mr Danucha said the impact of rising commodity prices on labour costs and employment needs to be closely monitored, with inflation having increased since late 2021 due to oil price hikes and increases in the cost of production.

Higher fertiliser prices may also have an impact on agricultural employment and transportation sector employment as a result of rising oil prices, he said.

According to Mr Danucha, key issues that needed to be monitored include the number of unemployed people who had never worked before, which has risen to 260,000 people, a 5.2% increase over the first quarter of last year.

Long-term unemployment has also continued to rise, with the figures estimated at 174,000 in the quarter, up from 130,000 in the previous quarter.

Unemployment among highly educated workers remained high, with tertiary graduates accounting for 3.1% of the unemployed, or 225,000 people.

"The issues that should be monitored in the remaining seven months include the fragile global economy which still faces a spate of risks, especially from the ongoing Russia-Ukraine war and supply chain disruption caused by China's zero-Covid policy," said Mr Danucha.

"The number of foreign tourists remains low in comparison to before Covid-19. Although domestic tourism continues to increase, boosted by the government's tourism stimulus programme, the expenditure proportion is still insufficient to compensate for the loss of revenue from foreign tourists," he said.

"As a result, it is critical to focus on opening up the country and attracting as many foreign tourists as possible."

Nonarit Bisonyabut, a research fellow at the Thai Development Research Institute (TDRI), said it is a good sign that the unemployment in the first quarter this year dropped to 1.53% thanks to the economic recovery.

But he expressed concern about underemployed workers whose numbers are estimated at many million people.

According to Mr Nonarit, according to normal criteria, people should work more than 35 hours a week to ensure they will have sufficient income. He said there are around 8.8 million underemployed people now.

He said the government has to urgently provide full-time jobs to people who move back to rural areas. Moreover, an application should be developed to enable job seekers to find jobs that match their skills more easily.