From luxury cars to tuk-tuks, an electric era dawns

By end of 2022, a fully-electric Mercedes-EQS will roll off a production line in Bangkok to mark another milestone in Thailand’s remarkable journey from conventional automaking hub to regional frontrunner in electric vehicle (EV) production.

The German luxury carmaker not only chose Thailand as its first location in Southeast Asia to manufacture the trail-blazing EQS, but also selected the Kingdom as one of only seven locations in the world to produce the high-performance lithium-ion batteries that can power the vehicles for more than 700 kilometres on a single charge.

“This shows how important Thailand is to us,” Roland Folger, President & CEO of Mercedes-Benz’s Thai business, said in an interview. “The EQS is the absolute highlight of our full battery vehicles – the topmost as far as technology is concerned. In Thailand, we have partners we know can deliver.”

Mercedes-Benz, which has been building cars in Thailand for the local market since 1979, and last year reported a pandemic-defying 13 percent increase in sales, now hopes to start exporting vehicles from its Bangkok factory, Folger says. And it is far from alone in betting its regional EV ambitions on a country that has grown to become the world’s 10th biggest auto manufacturer in 2021 while simultaneously devising an environmentally friendly growth model to fight climate change.

A Mercedes-Benz sedan rolls off the production line at the company’s Thonburi Automotive Assembly Plant in Samut Prakan, near Bangkok, Thailand, which by the end of 2022 will be manufacturing fully electric Mercedes-EQS models — another milestone for EV production in Southeast Asia’s auto hub. 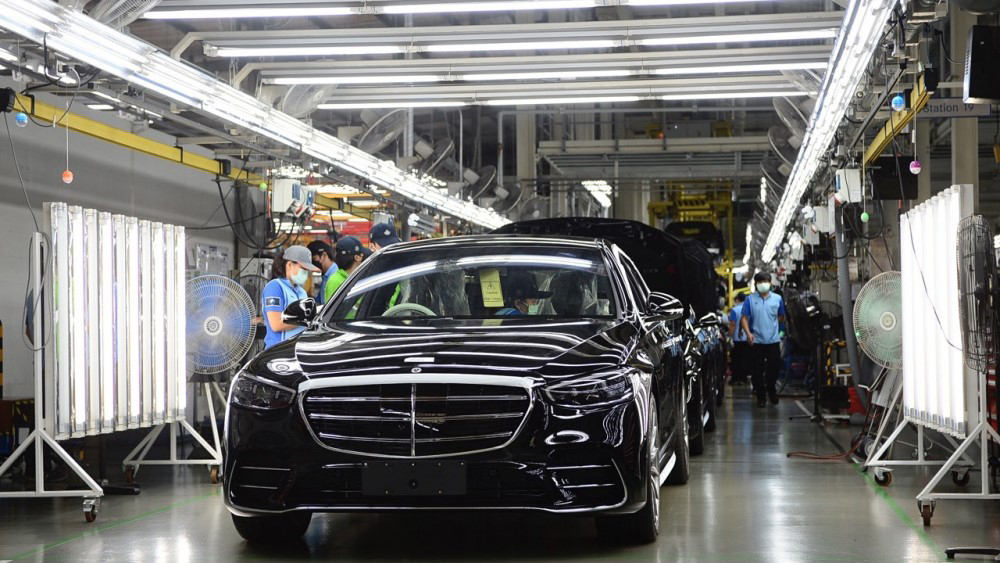 A Mercedes-Benz sedan rolls off the production line at the company’s Thonburi Automotive Assembly Plant in Samut Prakan, near Bangkok, Thailand, which by the end of 2022 will be manufacturing fully electric Mercedes-EQS models — another milestone for EV production in Southeast Asia’s auto hub.

Auto giants including Toyota Motor Corp of Japan as well as Great Wall Motor and SAIC Motor of China have also signed up for a government incentive plan to promote EV sales and production in Thailand.

Toyota is the world’s – and Thailand’s – largest vehicle manufacturer and has its Asian headquarters in Bangkok. Great Wall and SAIC, having already helped China become the world’s number one EV market by volume, now plan to make Thailand their regional manufacturing base for ASEAN – a 10-nation grouping with 681 million consumers.

Meanwhile, Mitsubishi Motors, which was the first company to export cars made in Thailand back in 1988, is betting heavily on Thai-produced plug-in hybrid electric vehicles (PHEV), as it transitions towards all-electric power trains for passenger cars by 2024.

Thailand, Southeast Asia’s second largest economy with a population of 70 million, is also attracting heavyweight newcomers determined to cash in on the EV revolution. Foxconn Technology Group, the world’s biggest contract electronics company, best known as a maker of Apple iPhones, has chosen Thailand as one of its first two locations in the world to build EVs.

Foxconn has partnered with Thailand’s state-owned oil and gas giant, PTT – one of the world’s largest energy companies – to form a joint venture enterprise, HORIZON PLUS, that plans to invest between $1 billion and $2 billion to build finished cars for other manufacturers using a modular platform and software developed by Foxconn.

With production due to start in 2024, the partners plan by 2030 to be manufacturing between 150,000 and 200,000 vehicles annually in Thailand’s high-tech Eastern Economic Corridor. One potential early customer for the joint venture: Chinese startup Hozon New Energy Automobile, which wants to work with HORIZON PLUS to produce right hand drive EV models suitable for countries like Thailand and some 70 others that drive on the left.

Home-grown Thai entrepreneurs are already building electric vehicles and developing the infrastructure to power them. Energy Absolute, a listed Thai company with a market valuation of $10 billion, is selling electric buses and boats, has an electric car ready to launch and is building what to date is the country’s biggest network of charging stations.

Such is the rate of change that the Thai government estimates that by 2030 – just eight years from now – 30 percent of all autos manufactured in Thailand will be electric. That would mean 750,000 out of the 2.5 million vehicles the country is expected to produce for local and international markets that year, and of that 750,000, half will be BEVs.

Thailand is setting equally aggressive targets for the infrastructure required to support its zero-emission ambitions. The government estimates that some 900 public quick chargers have already sprung up throughout the country at gas stations, shopping malls, condominiums, golf courses, hospitals and almost anywhere else motorists spend some down time. 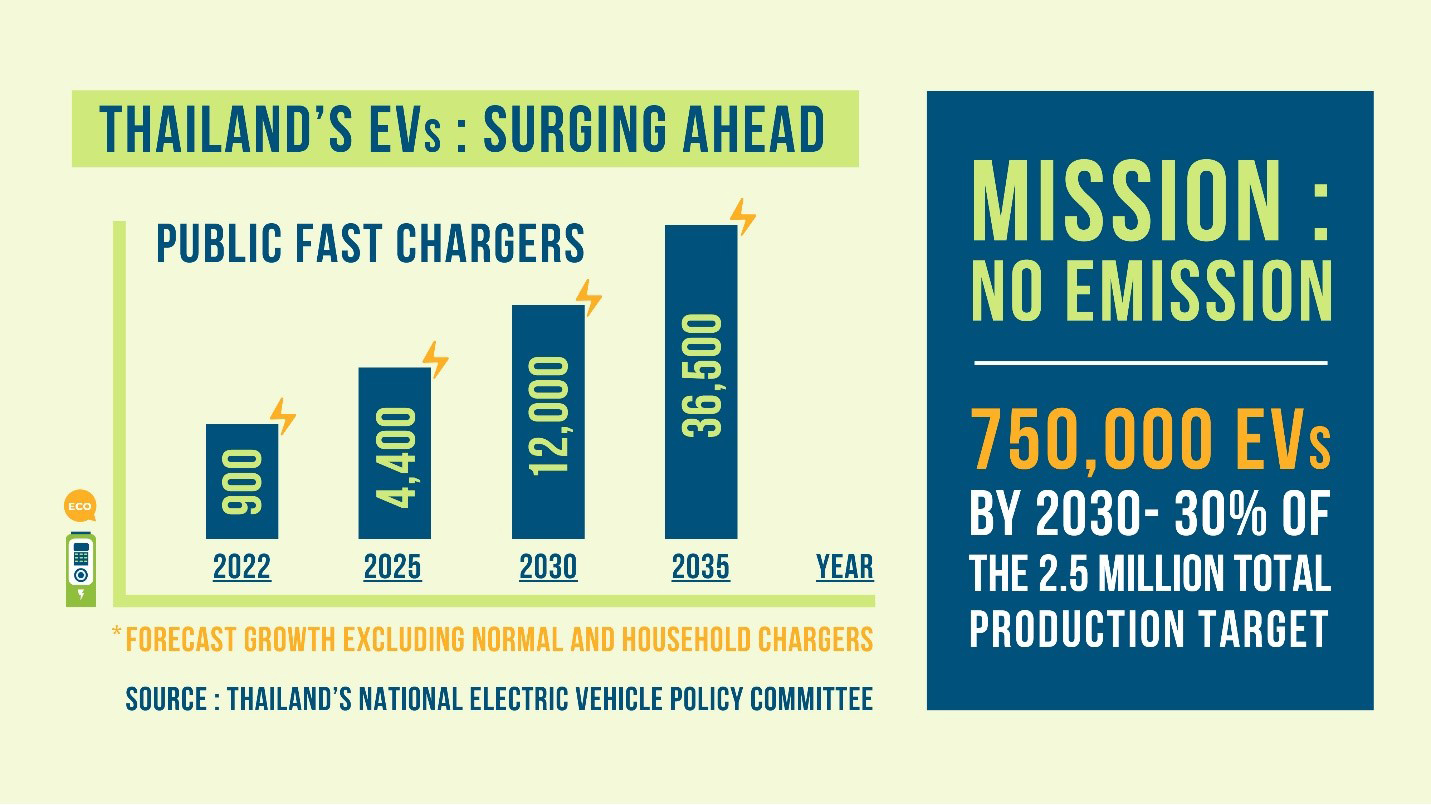 Thailand’s emergence as an EV hub has been fast-tracked by highly favourable government policies that comprehensively incentivise both investors in the EV sector’s supply chain and car buyers. The Thailand Board of Investment (BOI) offers 3-11 years of tax holidays for EV production of all types, including BEV platforms. On top of that, the BOI also grants investment incentives for EV-related infrastructure, especially charging stations, to accelerate the growth of the domestic market for EVs.

Additionally, the Thai government is offering subsidies that should reduce the price of EVs by between around $2,000 and $4,400 per vehicle depending on the model and battery capacity.

Investors appear to be taking note. During the first quarter of 2022, investment pledges in the automotive and parts sector more than quadrupled from a year earlier to the equivalent of $1.2 billion.

Proof positive of Thailand’s clean energy goals is its broader commitment to sustainability and the fight against climate change. Domestically, the government has embraced an all-encompassing, environmentally friendly growth model known as the Bio Circular Green Economy, or BCG. And throughout 2022, Thailand is seeking to lead the world in a similar direction during its year-long chairmanship of the Asia Pacific Economic Co-operation forum (APEC), the 21-nation grouping that includes the world’s three largest economies, the U.S., China and Japan, and generates 60 percent of the world’s economic output and energy use.

On the EV front, Thailand’s commitment is further illustrated by the involvement of state champion PTT, a Fortune 500 company majority owned by Thailand’s Finance Ministry that boasts $51 billion in annual revenues, accounts for 13 percent of the market capitalization of the Stock Exchange of Thailand and was once only synonymous with oil and gas.

Today PTT is not only developing clean energy cars with Foxconn, but also making major investments in battery research and development, EV charging stations and an EV car rental platform. “We think that every step we take has more benefit for the world and Thai society,” Dr Buranin Rattanasombat, PTT’s Senior Executive Vice President for Innovation and New Ventures, said in an interview. “Our cooperation with Foxconn will be an important driving force in the development of the EV value chain in Thailand.”

Kay Chiu, the Foxconn executive who is CEO of the HORIZON PLUS joint venture, says Thailand’s long experience in auto manufacturing has readied the industry for EV transformation. “With the incredible support from the Thai government and relentless efforts of the BOI, we believe that we have made the right decision coming here,” he said.

Elliot Zhang, President of Great Wall Motors’ business in ASEAN, says the region is one of the world’s most important markets for China’s largest manufacturer of SUVs. Hence Great Wall’s decision in 2020 to acquire an auto production plant in Thailand formerly owned by General Motors.

“Thailand has superior geographical advantages, complete industrial supply chain and sufficient reserves of talented personnel,” says Zhang, whose locally produced Haval H6 hybrid SUV and ORA Good Cat BEV models imported from China made successful debuts in Thailand last year. “We are confident that all these strengths will enable our strategy to build Thailand into the R&D and manufacturing hub of GWM for the ASEAN region.”

China’s SAIC has similar ambitions for its MG brand, which it manufactures and distributes in Thailand through SAIC-CP, a joint venture with Thai conglomerate CP Group. MG describes its newest ZS model as being part of its “mission to drive the country’s automotive industry to the international level.”

For Mitsubishi Motors, Thailand has long been a regional base. Eiichi Koito, president and chief executive officer of Mitsubishi Motors Thailand, notes that what with his company’s role as the first major car maker to introduce a mass-produced BEV model as far back as 2009, and Thailand’s importance as the company’s biggest manufacturing hub outside Japan, “we appreciate the Thai government’s policy to promote electrified cars in the country with promotion packages that assist both brands and consumers.” Mitsubishi Motors’ first response has been to launch the Outlander PHEV in Thailand with more electrified models to follow. “Our clear direction now is to launch 100% of our passenger cars with electric power trains from 2024 onwards,” Koito said.

Back at Mercedes-Benz’s Bangkok headquarters, President & CEO Folger reflected on his company’s growth from manufacturing a single E class model (W123) in 1979 to 28 models, including hybrids and the 100 percent electric EQS, today. During that time, Thailand’s growing prosperity and promotion of sustainable development through green technologies has helped Mercedes-Benz sales surge even during the Covid crisis.

“We feel strengthened in our belief that we are in the right place,” Folger said. “There is very strong market potential here and if we can continue to work with the BOI to our mutual benefit, we can grow much faster than in other Southeast Asian countries.”