Thailand, among other ASEAN countries, is rolling out the pandemic safe house and rolling up its sleeves to continue making progress reaching its multiple goals involved in transitioning to Thailand Industry 4.0, the next generation of the country’s industrial development. Concentrated in the Eastern Economic Corridor (EEC), supporting infrastructure developments include upgrading U-Tapao International Airport, High-Speed Rail Linking 3 Airports, extensions to Motorway No. 7 and other routes, and Laem Chabang Seaport Phase 3. Increased carbon emissions alongside such developments are, however, unavoidable.

With well-laid plans including initiatives to reduce poverty in past years, Thailand’s growing pains have led to better perspectives that in turn are propelling new initiatives that enable the bold steps to be taken prudently and sustainably. Meanwhile, foreign trade partnerships continue to prove good strategic moves in keeping Thailand on the right track. 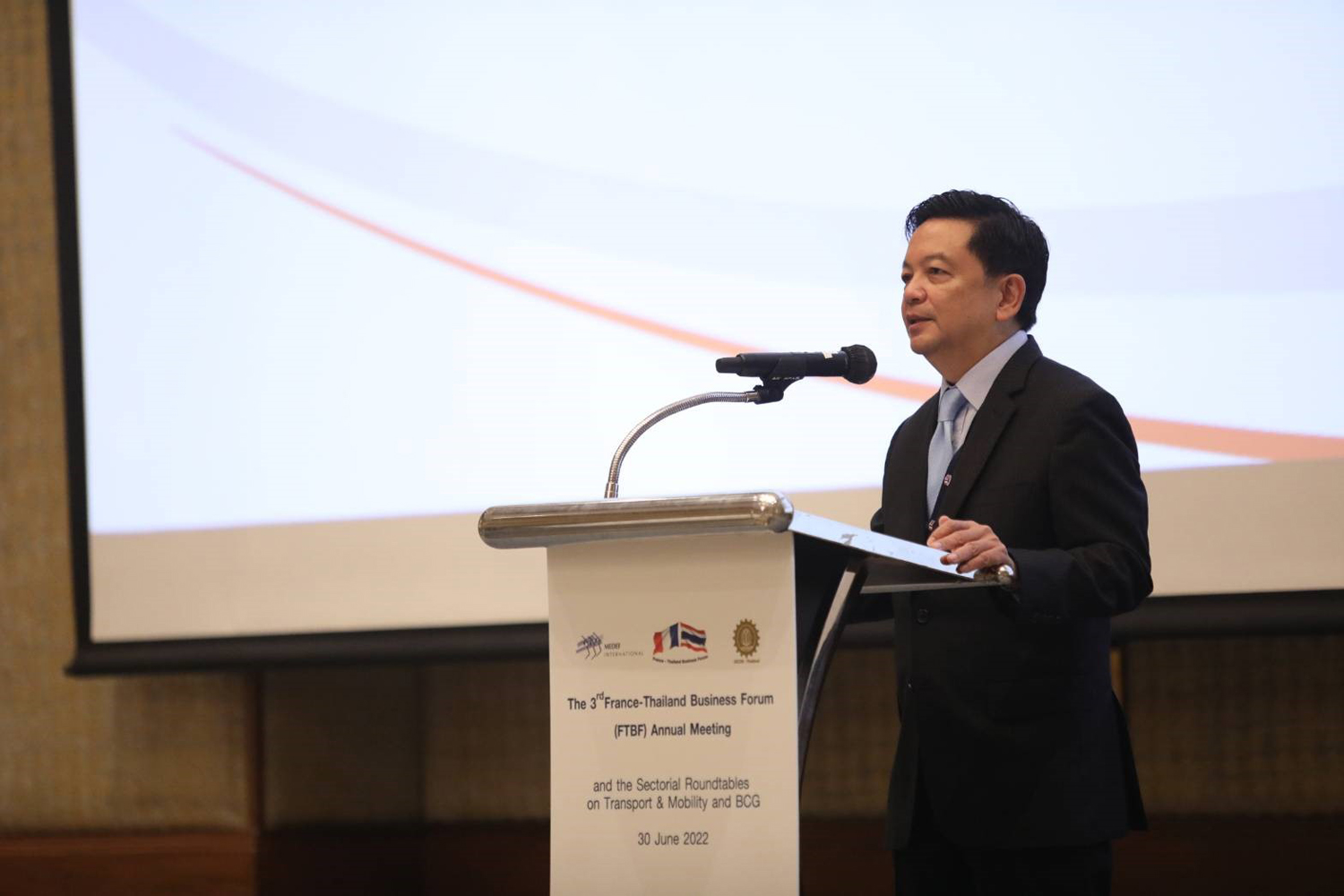 He adds that, “France has been an ASEAN Development Partner with Thailand since 2020, with a particular focus on chemical products, automation, telecommunication, aviation, and pharmaceutical sectors.”

Supporting these trends, the France-Thailand Business Forum (FTBF) is hosted annually in collaboration with the Joint Standing Committee of Commerce, Industry and Banking, and MEDEF International. The forum promotes investment opportunities in accordance with the France-Thailand Roadmap 2022-2024 signed between the two countries.

“With the worldwide recognition of its carbon neutrality leadership, France can be a key investment partner for Thailand in areas of carbon emissions expertise and innovative ecological technologies applicable in areas such as transporation, smart city development and energy transition. As such, it is highly supportive of Thailand’s transition to Industry 4.0 and goal of reducing carbon emissions by 2050 as pledged at the COP26 climate summit earlier this year.”

At the 3rd France-Thailand Business Forum in Bangkok, France exhibited and featured in areas of transport & mobility, BCG, decarbonisation and smart city development. Government officials, industry leaders, and business leaders from both the French and Thai public and private sectors have all been involved. 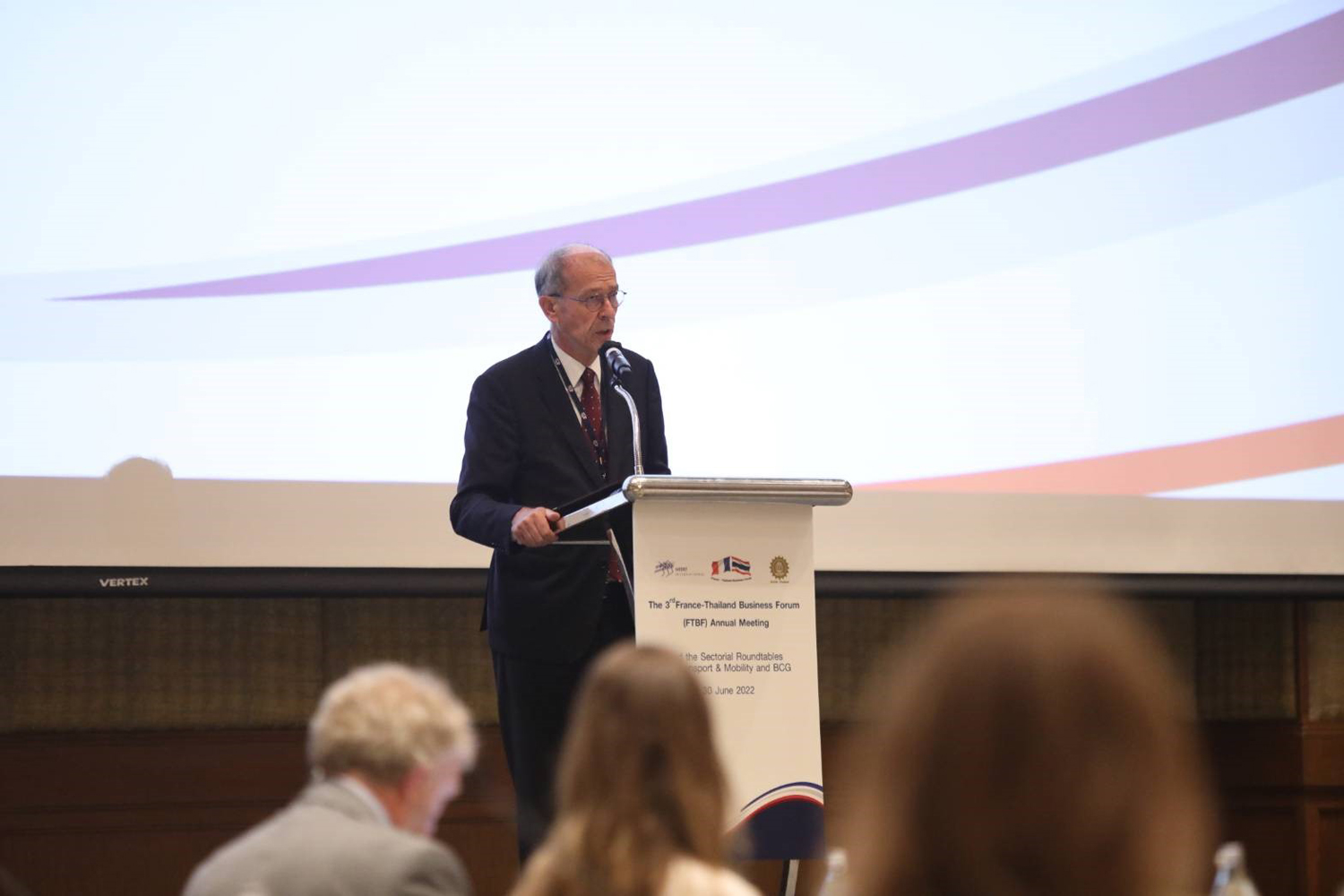 “In supporting dynamic economic development in Thailand, the French Business Council, along with at least 20 French multinational companies in the energy, environment, transportation, logistics, infrastructure, and sustainable smart city sectors, are delighted to join the forum to show what they offer in terms of supporting Thailand’s transition to Industry 4.0,” says Francois Corbin, Co-Chairman of the French Business Council and Vice President of MEDEF International. “This will complement Thailand’s own adoption of emerging innovation trends, particularly in the sphere of green technologies. In turn, this can add value in Thai industrial sectors at the same time as helping to support Thailand in achieving its net zero carbon emissions goal.”

Thailand is currently home to at least 280 French entities. Moreover, the Thailand Board of Investment (BOI) recently granted investment incentives to 15 projects proposed by French companies with total funds amounting to some 2.3 billion baht.

“Thailand’s resources and infrastructure developments is similar to France’s ongoing expansion in 5G and quantum technology areas driving mobility, health & wellness, and food & agriculture sectors forward,” adds Mr Corbin. “As such, France looks to Thailand to be its economic gateway to ASEAN and beyond.”

“With the assurances of government policies and official initiatives, French companies have Thailand top of their lists of preferred investment destinations,” concluded Mr Corbin. “It will be worth watching this space closely.”