Sentiment is on the up, but the nation still faces economic challenges in the second half

Protesters hold a sign saying ‘Prices of Goods Go Up, Wages Down’ as they demand a hike in the daily minimum wage for workers outside Government House on July 18, 2022. One is seen holding a bowl of instant noodles, which has come to symbolise economic hardship in the country. (Photo: Apichart Jinakul)

Bustling commuters, traffic gridlocks and crowded shopping malls have become more common in the third quarter following the country's reopening in June, fuelling hopes that Thailand is now getting back on its feet.

But concerns have been raised about various pressing problems that could potentially undermine the country's path towards recovery, including rising inflation rates, surging Omicron cases caused by BA.4 and BA.5 sub-variants, the prospect of an interest rate hike and declining purchasing power.

Inflation rates are rising in Thailand and worldwide, pressured by high fuel and food prices, chiefly caused by the ongoing Russia-Ukraine war.

The Bank of Thailand (BoT) has forecast the headline inflation rate to peak in the third quarter at 7.5%.

The persistently high inflation rate, coupled with the US Federal Reserve's hawkish rate hikes, is now leaving the central bank with little choice but to raise the interest rate.

Many analysts believe the central bank's Monetary Policy Committee will raise its key interest rate from 0.5% at its next meeting on Aug 10. But the approach could also risk jeopardising small and medium-sized enterprises (SMEs) with higher borrowing costs while aggravating household debt.

Bangkok Post talked with several business leaders and analysts about the prospects for the country's economy in the third quarter amid these ongoing challenges.

When asked if the upward trend in the interest rate could affect domestic purchasing power in the third quarter, Amonthep Chawla, executive vice-president of CIMB Thai Bank, said it is inevitable that the Thai economy will expand at a slightly slower pace in light of the imminent policy rate hike by the central bank.

He expects the central bank's Monetary Policy Committee to raise the interest rate by 0.25% in the August meeting from the current rate of 0.50%.

If the committee raises the rate in the manner anticipated, the rate hike is unlikely to have an adverse impact on the Thai economy, Mr Amonthep said.

He added that Thailand's economic recovery in the second half of this year will be seen more clearly due to the country's reopening, which will boost domestic purchasing power. Most of the recovery will be in the tourism and related sectors and will boost sentiment in terms of spending among those in the mid-high segments.

However, in terms of the overall picture, Mr Amonthep believes that purchasing power will be supported by the country's reopening, which will drive the economic recovery during the second half of the year.

Pornchai Thiraveja, director-general of the Fiscal Policy Office (FPO), said the recovering tourism sector will be the key engine driving the Thai economy in the third quarter and second half of this year.

The state agency has retained its forecast for economic growth this year at an average of 3.5%, underpinned by a recovery in both the tourism sector and domestic consumption.

It has also revised upward its projection of the number of foreign tourist arrivals this year to 8 million, from the forecast of 6.5 million it made in April.

Mr Pornchai added that the higher number of tourist arrivals this year has boosted household income and supported the recovery of the tourism and related sectors.

The state agency also upgraded its growth projection of private consumption this year to 4.8%, up from the April forecast of 4.3%.

The FPO expects the value of exports to expand 7.7% year-on-year this year, higher than its April forecast of 6%, despite the impact of the Russia-Ukraine war.

Private investment is expected to expand 5.7% this year, compared to the 4.5% growth it projected in April, in line with the economic recovery.

Tim Leelahaphan, an economist at Standard Chartered Bank (Thailand), said the bank has a positive outlook on the Thai economy for the rest of the year, especially in the fourth quarter.

He forecast the Thai economy will expand 2% in the second quarter this year before rising to 3% in the third quarter and 6% in the fourth quarter.

Standard Chartered Bank expects the Thai economy will grow 3.3% in 2022 and this will increase to 4.5% next year. There will be clarity in terms of the country's economic recovery starting from the latter half of this year. A high degree of volatility in the financial markets will likely persist during the same period.

Marisa Sukosol Nunbhakdi, president of the Thai Hotels Association (THA), said the hospitality business in the third quarter is still seeing further improvement from the new flow of tourists following the country's full reopening on July 1.

However, the impressive growth was from a very low base during the pandemic.

The average occupancy in July is estimated to reach 40% before increasing to 50% in August, mostly driven by potential markets such as India and the Middle East as well as the domestic market still playing a vital role in supporting the hotel business.

However, hoteliers will have to wait for a more precise outlook in the future as long-haul tourists tend to book last minute. Travellers and tour operators still have to regularly get updates on restrictions for both direct and transit flights in Asian countries before planning trips and tour services.

Mrs Marisa said there are also great challenges due to the lack of air connectivity, surging airfares and insufficient flight frequency which also causes delays in making travel decisions to Thailand and Asia as tourists would like to visit many countries during their overseas trips, which would require them to have a bigger budget.

She said the country should not reimpose any travel rules. Consistent regulations would help maintain confidence among tourists after being one of the first countries to reopen to international visitors.

Most importantly, the government has to consider proposals from the private sector to implement a visa fee exemption and visa extension from 30 to 45 days for international travellers by this quarter to offer seamless travel and effectively boost the number of tourists.

"The country's attractiveness as the preferred destination continues to draw international arrivals which are not only tourists but also long-stay guests and digital nomads," Mrs Marisa said.

Despite the upward trend in tourism, there is still a wide gap in terms of recovery between international chain hotels in prime locations and 3-4-star local hotels as tourists tend to choose big hotels for their stays over small ones.

She said the soft loans for hotels worth 5 billion baht that were recently approved by the cabinet, would help SMEs restart and maintain their business until next year while waiting for a full recovery. 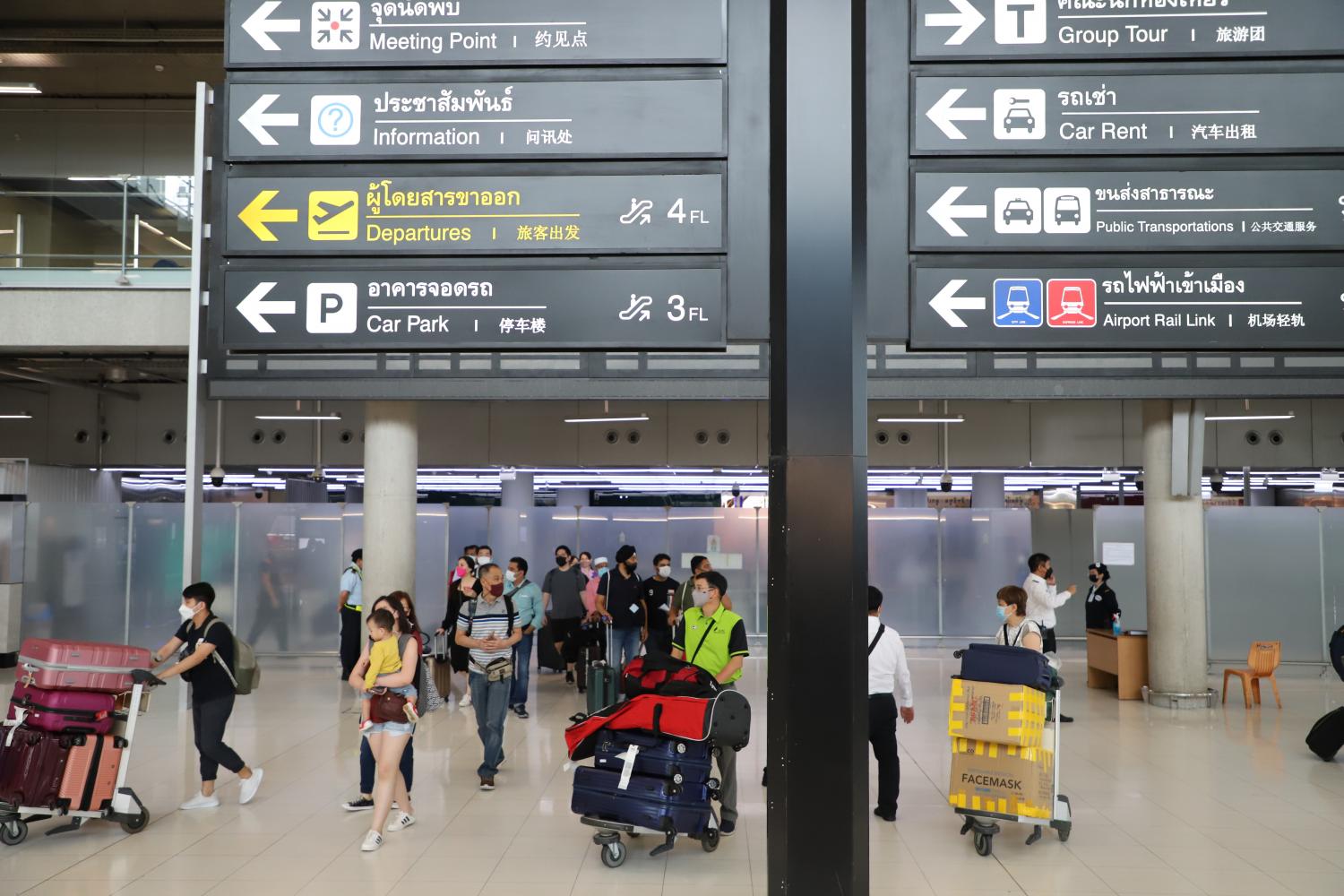 The Fiscal Policy Office has revised up its projection for the number of foreign tourist arrivals this year to 8 million from its forecast in April of 6.5 million arrivals, following the formal reopening of the country.  (Photo: Wichan Charoenkiatpakul)

The Federation of Thai Industries (FTI) has become more pensive about business uncertainties in the third and fourth quarters, during which time Thailand is expected to see only slow economic recovery.

From the higher policy rate, expected to receive approval from the central bank in August, to worries over soaring Covid-19 infections and high inflation, the country is about to face a spate of economic challenges in the second half this year.

Even exports, currently one of the country's main economic drivers, may face a degree of uncertainty.

Kriengkrai Thiennukul, chairman of the FTI, said he is monitoring what new actions US President Joe Biden may take to curb high inflation in his country, a move that may affect Thai exports.

The tariffs were earlier imposed on Chinese products during the US-China trade war, which drove up their prices.

If Mr Biden goes ahead with the tariff reduction plan, Thai exports to the US will face tougher competition because the production costs of certain Chinese products are lower than those made by Thai manufacturers, said Mr Kriengkrai.

The US consumer price index in June soared 9.1% from a year ago, while in Thailand the Trade Policy and Strategy Office under the Commerce Ministry reported that headline inflation in June, gauged by the consumer price index, rose 7.66% year-on-year from June 2021.

The FTI believes the central bank will follow the US Federal Reserve (Fed) and increase its policy rate from 0.5%.

"We have to monitor how much the Fed will further increase its benchmark interest rate and then look at what will be the new policy rate of the BoT," said Mr Kriengkrai.

The central bank's Monetary Policy Committee is expected to discuss the rate increase at its next meeting this month.

Businesses will certainly face the impact of a higher interest rate as it will increase their financial costs. Many companies have begun to increase their product prices while others promised to keep their prices unchanged for as long as they can, said Mr Kriengkrai.

Wallaya Chirathivat, chief executive of Central Pattana Plc, an SET-listed property and retail developer, said she expects the country's economy to recover. However, the recovery in the second half of this year is likely to move at a slow pace because of a spate of risk factors, including the volatile global economy, the ongoing Russia-Ukraine war and hefty energy prices.

Ms Wallaya said higher investment in megaprojects will likely help shore up the domestic economy and increase the employment rate and productivity.

Somchai Lertsutiwong, chief executive of Advanced Info Service (AIS), the country's largest mobile operator by subscriber base, said the country has seen signs of recovery in the third quarter, supported by the country's reopening.

The reopening policy is a boon for tourism, which in turn levels up international roaming (IR) revenues for the telecom operators, he said.

The third-quarter recovery remains slow as Chinese tourists have not yet been allowed to travel abroad freely, he said.

The IR business generally contributes to 4% of total revenue for the company or several billion baht annually, he said.

AIS does not expect the country's reopening to significantly push up the IR revenues anytime soon.

According to Mr Somchai, the telecom sector is still facing various challenges, such as high inflation, low purchasing power and a weaker baht, which could have a negative impact on the segment.

"The third quarter will be better than the first half but the final quarter is likely to be the brightest hope," said Mr Somchai.

Fierce competition in the sector is also eating into operators' profit margins, despite a surge in the usage of digital services and the internet, he said.

Overall, the country will benefit from a flow of activities and new projects in the final quarter through the end of the year, he added.