The Office of the National Broadcasting and Telecommunications Commission on Phahon Yothin Road. The office said it has no authority to approve or prohibit the deal. (Photo: Pornprom Satrabhaya)

The chief of Advanced Info Service (AIS) is pushing the National Broadcasting and Telecommunications Commission (NBTC) to decide whether to approve or decline the True-DTAC mega merger, noting that the agency has the legal authority to do so.

Somchai Lertsutiwong, chief executive of AIS, compared the telecom regulatory body to the Bank of Thailand, the country's central bank.

้He added that this begs the question as to why those behind the True-DTAC deal think they do not need approval from the NBTC. When AIS said it would acquire Triple T Broadband (TTTBB) and Jasmine Broadband Internet Infrastructure Fund (JASIF), the firm submitted its request for the NBTC to approve.

"So if AIS, True and DTAC, all three firms wanted to merge, they can do so without asking for the NBTC's approval?," the AIS chief said. 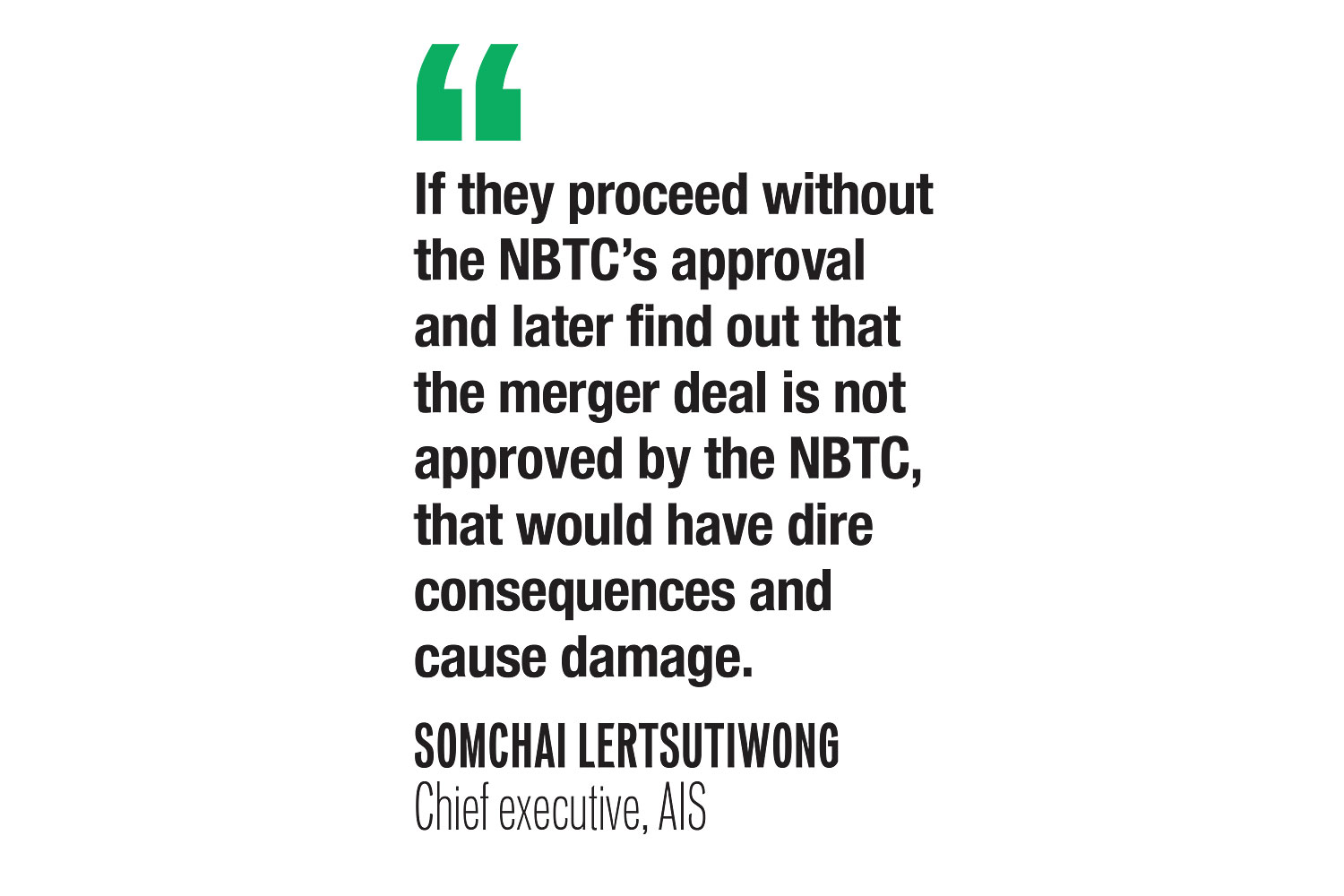 However, Suphachai Chearavanont, chairman of the executive committee of True Corporation, earlier said the AIS takeover deal is subject to approval from the NBTC, while their merger deal will be done through a share swap into a new company, noting the two deals are different in terms of consolidation models.

Mr Suphachai insisted the NBTC has no power to approve or reject their merger, but can only impose measures to govern it.

Mr Somchai accused True and DTAC of not submitting any letters asking for the NBTC's permission and claimed that, meanwhile, the chiefs of True and DTAC kept pushing the narrative that the NBTC has no legal authority to approve or reject the merger proposal.

"Do Telenor [the major shareholder of DTAC] and China Mobile [the strategic partner of True Corp] understand any rules and laws governing the mergers in the telecommunication sector of Thailand? It is clear that they wanted to merge, but instead of submitting documents for approval to proceed with the merger, why are they challenging the Thai regulators?," Mr Somchai said.

Mr Somchai said the merger between True and DTAC is part of an inorganic growth that many businesses engage in when opportunities arise. Nonetheless, firms must consider factors of fair competition and laws governing the sector.

He said the telecommunications sector directly impacts millions of consumers as the sector is considered a necessity. As a result, Thailand's constitution ordered the establishment of a regulatory agency, the NBTC, to oversee the sector.

He added that the NBTC is working relentlessly and has appointed four sets of committees to study and handle the True-DTAC merger deal.

Mr Somchai believes the results and findings of the four committees should be made public because the information directly affects shareholders of these firms, especially those who are looking to sell their shares back as the merger is underway. 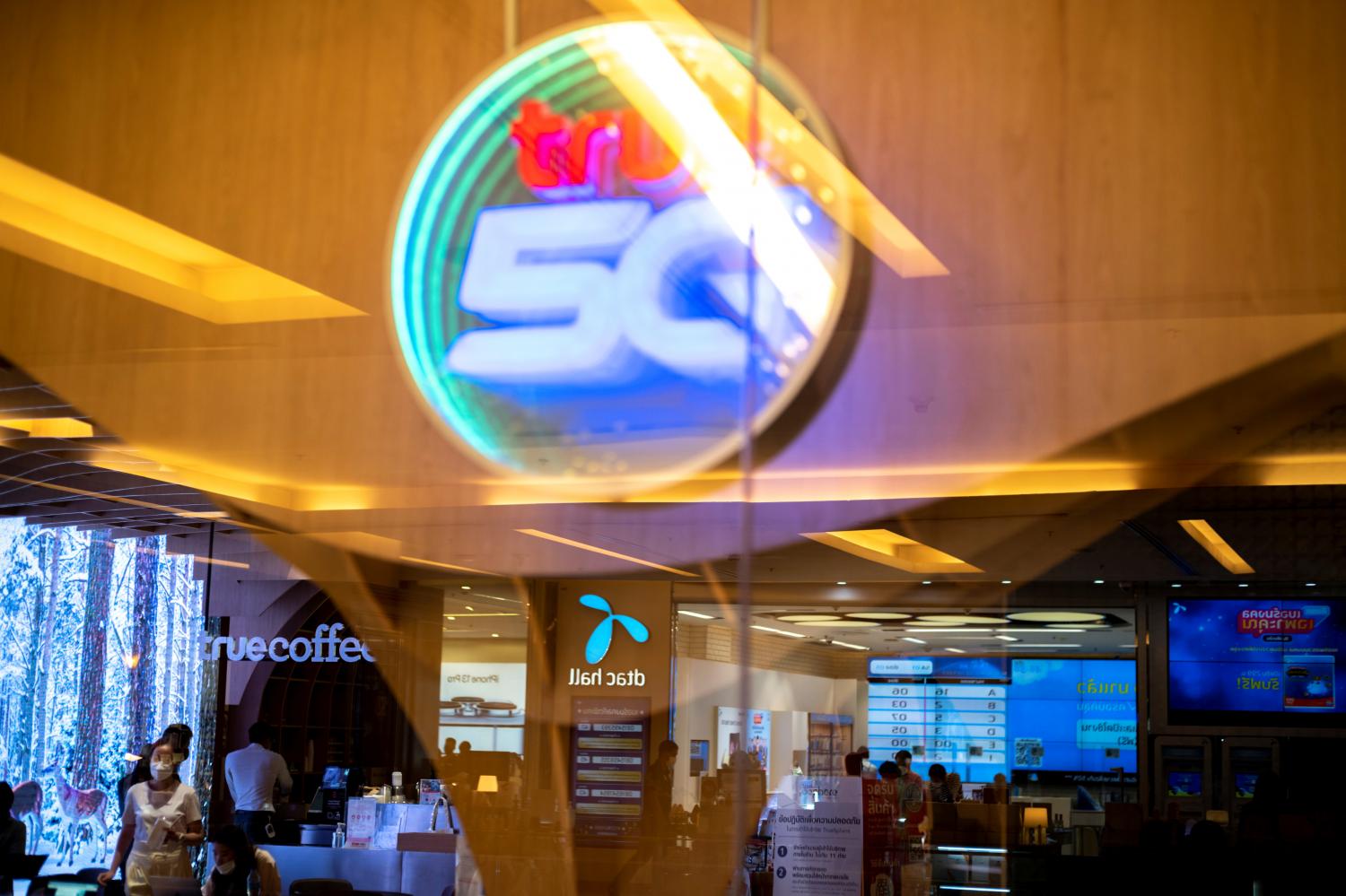 Logos of True and DTAC are seen at a department store in Bangkok. (Photo: Reuters)

Furthermore, Mr Somchai said the NBTC should have an appropriate amount of time to consider and make a decision whether to approve or reject the merger between True and DTAC because, afterwards, the NBTC will be able to provide legitimate reasons and also make the process transparent to society and all consumers.

In response to the latest press conference by True and DTAC that claimed that the two firms could merge per the 2018 NBTC regulation which states that the NBTC can only govern mergers and not approve or reject them, Mr Somchai begged to differ.

"This is up for interpretation, but what remains clear are the intentions and rules governing mergers. One can see it in the constitutional law in 2017, and the telecommunication sector law in 2001, which serves as the core principle of the NBTC regulation," he said.

"And there is also a regulation in 2006 that prohibits monopolies or unfair competition. So how come True and DTAC only cite the 2018 regulation as their reference or spark public debate about the merger topic?," Mr Somchai said.

Another important factor is that many consumers have gone to the Administrative Court of Thailand. The court gave an opinion which reaffirms the NBTC has legal authority to approve or reject any mergers, he said.

Mr Somchai believes that True and DTAC will wait to hear whether the regulator approves or rejects the merger before proceeding any further. It is because the mother firms of both True and DTAC, which are China Mobile and Telenor, have good governance and will not allow any activities that violate Thai laws.

"If they proceed with the merger without the NBTC's approval and later find out that the merger deal is not approved by the NBTC, that would have dire consequences and cause damage. These could result in an investigation and withdrawal of the deal."

When asked about AIS acquiring 3BB and the differences between the True-DTAC deal, Mr Somchai said everything is proceeding according to plan.

"We have notified the NBTC that we are planning to acquire 3BB. It is now the period where we await regulatory approval on whether we can actually merge or not. Then we will consider and proceed accordingly," he said.

"This is different from the True-DTAC deal because when AIS completes the merger with 3BB, we will not become number one in the market. We will actually be number two. Also, the number one firm in the fixed broadband market does not have more than half of subscribers of the total market's subscribers."

Opponents of the True-DTAC merger cite the 2006 NBTC regulation, which outlines the agency's responsibilities, powers and duties to prevent monopoly or unfair competition in the broadcasting, television and telecommunications sectors.

Article 8 of the 2006 regulation states that the NBTC may ban business holdings or impose specific measures to prevent or suspend business operations, acts or behaviours that monopolise or reduce or limit competition in telecommunications services.

On this point, it is interpreted that the NBTC has the legal power to prohibit mergers or acquisitions.

Nonetheless, the NBTC office said it has no authority to approve or prohibit the deal, meaning that the regulator can only prescribe measures to govern it.

A 2010 regulation by the National Telecommunications Commission (NTC) required merger deals to be approved by the regulator. The NTC was the telecom regulatory body prior to the establishment of the NBTC.

This authority was abrogated by an NBTC regulation in 2018 that allows those wishing to merge to only notify the regulator, not seek its approval.