The continuing rise in energy prices which have raised production costs for manufacturers and the prices of goods has prompted the Commerce Ministry to upgrade the forecast for headline inflation in 2022 to a range of 5.5-6.5% (averaging 6%) from the 4-5% range (averaging 4.5%) projected in March. 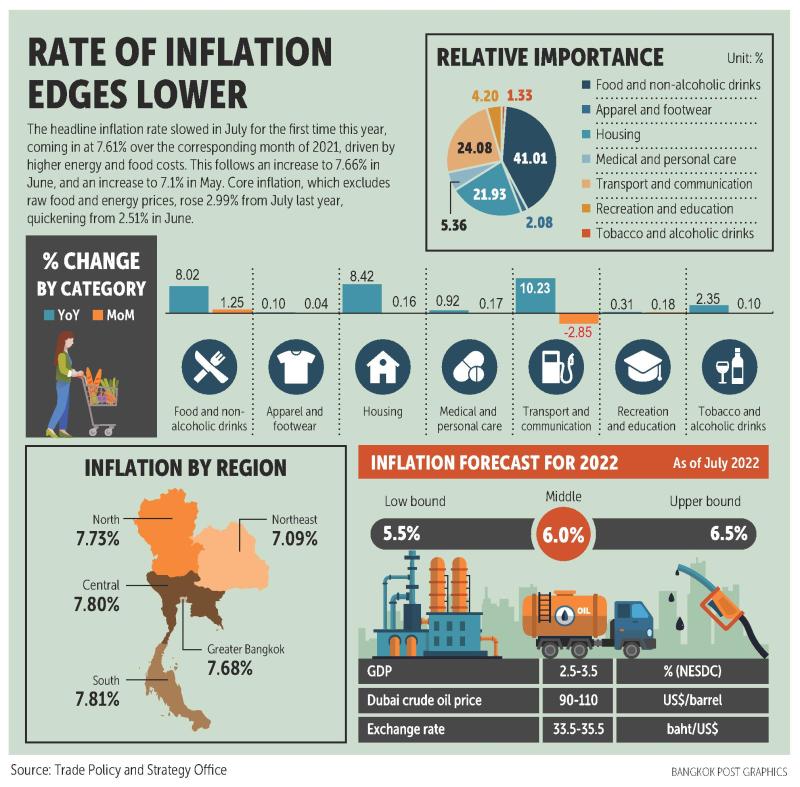 According to Ronnarong Phoolpipat, director-general of the Trade Policy and Strategy Office under the Commerce Ministry, energy prices, which account for 52.5% of headline inflation, rose on a continuous basis, affecting overall production costs and product prices, and they are expected to rise further because of external factors, particularly the Russia-Ukraine war.

He said his department is also closely following up on the impact of electricity charges, which account for 3.85% of headline inflation, on domestic inflation rates.

"In the remaining five months of the year, price pressures are expected to persist," said Mr Ronnarong.

"But the rates will bank on external factors and the oil prices. However, the new rate projection reflects current economic figures and is in line with the projections released by other state agencies."

He cited the National Economic and Social Development Council forecast for the inflation rate to stay in a range of 4.2-5.2% this year, with the Bank of Thailand predicting the rate at 6.2%, the Fiscal Policy Office at 6.5%, the Joint Standing Committee on Commerce, Industry and Banking at 5.7% and private banks in a range of 5.9%-6%.

In a related development, the Trade Policy and Strategy Office reported yesterday that headline inflation, gauged by the consumer price index (CPI), slowed to a 7.61% year-on-year rise in July after a sharp increase of 7.66% in June which accelerated from a 7.1% increase in May and a 4.7% rise in April.

Energy prices increased by 33.8% year-on-year in July, while the prices of food and non-alcoholic beverages increased by 8.02% from the same month last year.

According to the ministry, on a monthly basis, the CPI contracted for the first time since January, down by 0.16% from June.

The contraction was partly due to government measures and a partial retail price freeze in collaboration with manufacturers to ease the burden of the rising cost of living.

Core CPI, which excludes raw food and energy prices, saw a year-on-year rise of 2.99% in July, accelerating from 2.51% in June.