A move to expedite the enforcement of the new daily minimum wage as early as October has added to the debate over what the most acceptable wage rise should be.

Labour Minister Suchart Chomklin wants the cabinet to give the final say on the new wage within September, so it can take effect on Oct 1, three months ahead of the original schedule in January.

The minister reasoned that October is the right time to help workers relieve the cost of living situation as their purchasing power has fallen amid more expensive goods, driven by higher energy prices.

Businesses are bracing for the impact of the wage hike which will increase their costs, but at the same time promise higher sales of some products and a healthier economy.

While agreeing with the need to increase the daily minimum wage, the Federation of Thai Industries (FTI) strongly opposes a plan to apply the new wage in October as it wants to avoid being bombarded with heavier financial burdens.

The government should stick to the original schedule earlier agreed by the tripartite national wage committee to have the wage rise take effect on Jan 1 next year, said Kriengkrai Thiennukul, chairman of the FTI.

"We disagree with the rush to enforce the new rate on Oct 1 because many businesses are unprepared for a new storm," he said, referring to the wage hike which would increase operational costs.

It would not be right if the push for the early wage rise stems from a political motive to gain more votes in the general election next year, Mr Kriengkrai said.

The manufacturing sector is already gripped with concerns over the increase in the Bank of Thailand's policy rate and the prospect of higher electricity bills.

The central bank's Monetary Policy Committee resolved to raise the policy rate by 25 basis points to 0.75% on Aug 10 due to the economic recovery while an increase in the power tariff, which is used to calculate power bills, remains a wild card though an Energy Ministry source said earlier this month the government would postpone the increase.

Factory owners remain worried after the Energy Regulatory Commission said in June it expects the power tariff to rise during September and December this year, following higher prices of fuels used to produce electricity.

If manufacturers are whipped by the wage rise in October, some of them, especially those running small and medium-sized enterprises (SMEs), may succumb to higher operational costs and eventually need to shut down, said Mr Kriengkrai.

Financial burdens are a key factor determining the survival of businesses.

A survey of 300 companies by the Employers' Confederation of Thai Trade and Industry (EconThai) in June found less than half (47.4%) of the respondents could manage to maintain employment of staff after the economy turned sluggish due to the impact of lockdown measures to contain the spread of Covid-19.

Up to 36.8% needed to lay off their workers while some 15.8% said they hired new employees.

Mr Kriengkrai said businesses have long been aware of the minimum wage issue which tends to keep rising.

Many factories decided to adopt automation and robotics to replace human labour, which is expected to become scarce and more expensive.

The FTI knows workers are bearing a higher cost of living and the government is facing pressure to increase their wages as part of measures to help them make ends meet, but manufacturers want to see a wage hike next year as they want more time to deal with a spate of economic headwinds.

Small and medium-sized enterprises (SMEs) will face the biggest impact when the daily minimum wage increases.

They are already bombarded by high logistics costs and more expensive raw materials.

If they have to pay more money as soon as October, even those preparing for the wage hike may not be able to cope with the rapid increase in financial burdens, said Apichit Prasoprat, vice-chairman of the FTI and chairman of the Institute of Small and Medium Enterprises Manufacturing under the FTI.

To ensure a fair wage hike, the FTI and EconThai agree with a new rate which is based on inflation and living costs that can differ among provinces.

Wage rise proposals from each province, to be considered by the tripartite national wage committee, may be unequal but fair because they match living costs that vary in different provinces, said Mr Apichit.

"Many FTI members in each province who joined meetings on the minimum wage said they are willing to support a wage hike that truly reflects living costs," he said.

EconThai wants the government to base its calculation of the new daily minimum wage on inflation.

Tanit Sorat, vice-chairman of EconThai, said a 5-8% increase should be suitable because it reflects Thailand's inflation in line with the Commerce Ministry's forecast that inflation will be at least 5.5% in 2022.

The confederation opposes a proposal by labour groups which called for a new minimum wage of 492 baht. The groups said earlier the last wage increase was in January 2020, which took the minimum rate to a range of 313-336 baht.

Sanan Angubolkul, chairman of the Thai Chamber of Commerce, agreed with the Labour Ministry's minimum wage hike proposal, saying the 5-8% wage rise is acceptable now that the prices of overall consumer goods and manufacturers' production costs have risen on a continuous basis, weakening consumer purchasing power.

Mr Sanan said over the past few years, the Thai Chamber of Commerce has closely worked with the Labour Ministry and proposed guidelines for the wage rise to Labour Minister Suchart Chomklin, by using the mechanism designed by the tripartite wage committee in each province, the current inflation rate and labour productivity.

According to Mr Sanan, it is preliminarily estimated that the 5-8% wage increase will bring about 1.5-2.4 billion baht worth of additional money circulating in the economic system per month or roughly up by 20-30 billion baht per year, which will help drive GDP growth by 0.1-0.2 percentage points.

"Amid the current rising cost of living and costly consumer product prices, the workers' plight will be aggravated if their income is not allowed to rise. This will also slow the pace of the country's economic recovery," he said.

Internal Trade Department's director-general Wattanasak Sur-iam, meanwhile, said the Commerce Ministry is closely following up on the wage rise issue and its impact on production costs and the prices of products because wages are one of the goods' production costs.

Finance Minister Arkhom Termpittayapaisith said the economic situation needs to be factored in when the new minimum wage is considered. He warned that the wage hike could boost operational costs and inflation to certain levels, which could dent consumer purchasing power. 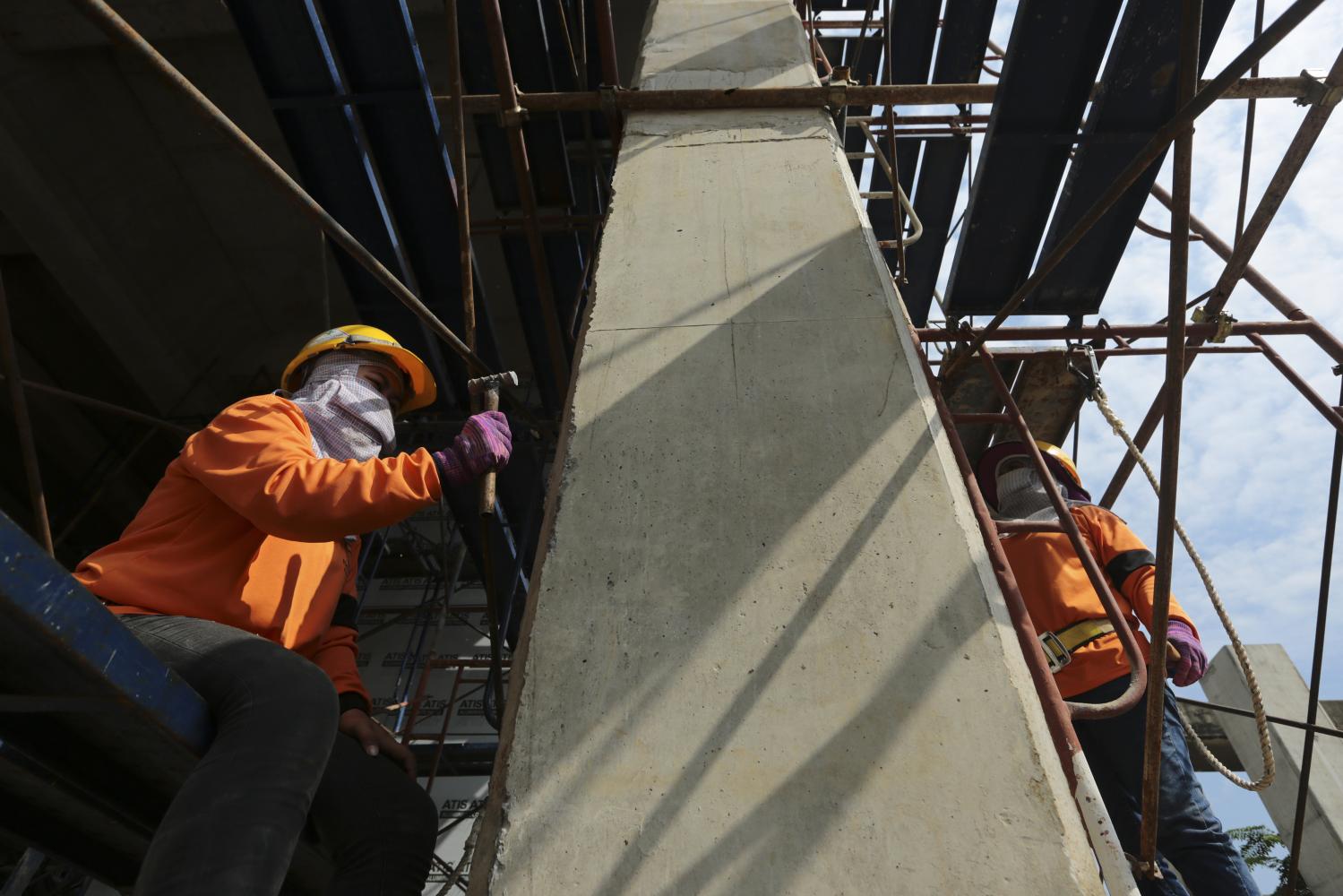 Construction workers carry out work on a new section of the BTS rail system in Bangkok. Patipat Janthong

Marisa Sukosol Nunbhakdi, president of the Thai Hotels Association, said an increase in the minimum wage would have a direct impact on small and midscale hotels in second-tier cities with lower tourism demand as most of them are still able to hire workers under the current minimum rate.

However, most 4- and 5-star hotels, particularly in Bangkok and major tourism provinces, have already increased the minimum wage since Thailand reopened due to a labour shortage across the industry.

For those who want to rehire workers who already left for better-paid jobs during the two years of the pandemic, they must offer a more appealing rate which already surpasses the minimum threshold.

According to the hotel business operator sentiment index in July, the employment rate recovered to 70% of pre-pandemic levels, while 74% of hotels that are expected to be impacted by the wage rate hike were 1- to 3-star hotels.

She said because most hotels still have an employment rate lower than that of 2019, the portion of payroll compared to other operational costs remained the same despite the higher wage.

Hotels have to assign dual or multi-tasked jobs for each employee, which is an effective method to handle both the labour shortage and the increased wage rate, she said.

"Soaring living costs triggered by inflation mean it's necessary for workers to get a better salary. Hotels have to find a way to manage operational costs if the government decides to push up the rate within this year," said Mrs Marisa.

Sumate Sudasna, president of the Thailand Incentive and Convention Association, said the Mice (meetings, incentives, conventions and exhibitions) segment also faces a labour shortage, particularly for the mid-tier operational level or lower as the market suddenly picked up in the second half.

Employees who already left the industry are reluctant to return if they have better-paid jobs or still have remaining contracts with new employers.

Uten Lohachitpitaks, group chief executive of SET-listed developer Pruksa Holding Plc, said a rise in the daily minimum wage would have an impact on the property sector, particularly those depending largely on labour.

However, the company faced minimal impact from higher wages as it used precast construction which relied on labour less than usual.

"The most pressing issue is the rise in construction costs in the first half which were affected by the Ukraine-Russia war, particularly steel. But the concern has subsided as the steel price last month dropped by 2-4% and continued to decrease in the third quarter. This can compensate for the higher wages."

"If the wages rise, we need to push the cost on to customers," he said. "Most customers understand the situation and agreed to the new costs."

Somchai Sittichaisrichart, managing director of SET-listed SiS Distribution Thailand, a tech product distributor, said an increase in the daily minimum wage will help drive the purchase of smartphones costing less than 5,000 baht. Products in this segment are gaining traction this year due to rising inflation, which makes people spend more cautiously, he said.

"We see a strong trend of people buying smartphones priced below 5,000 baht, which now account for 60% of the total smartphone sales, compared with last year, when handsets costing 7,000 baht were more popular," said Mr Somchai.

The sluggish economy has delayed the purchase of new handsets by 2-3 years, he said.

During the pandemic, sales of smartphones reached 1.8 million units per month as many people, including the elderly, bought smartphones to receive government financial assistance through the Pao Tang mobile app.

This year sales have dwindled to around 1.2 million units per month but the market is still supported by the buy-now-pay-later scheme or the instalment payment programme.

The wage increase may not help those in various industrial jobs whose wage is already higher than the daily minimum wage due to the labour shortage, but would be more beneficial to immigrant workers and those working for SMEs in small cities, he added.