Firms gear up for EV drive

A worker operates a machine at Nissan's battery manufacturing facility in Samut Prakan.

Among the 12 targeted S-curve industries at the core of the Eastern Economic Corridor (EEC) scheme, the electric vehicle (EV) industry is usually first on the list.

The government stepped up efforts to set clear goals and grant incentives to boost EV production and consumption, while the business sector is eager to adopt electric mobility technology for car and battery production, adding EVs to their development plans.

In March last year, the National EV Policy Committee announced it wanted EVs to constitute 50% of locally made vehicles by 2030, part of an ambitious plan to make Thailand a regional EV production hub.

The plan progressed when the cabinet resolved in February this year to approve a package of incentives including tax cuts and subsidies to promote EV consumption and production for 2022-2023.

The subsidies range from 70,000 baht to 150,000 baht depending on the type and model of vehicle, with lower excise taxes and import duties on completely knocked-down and completely built-up units.

The business sector is also shaping the country's EV industry, with automakers and energy companies making steady progress on their EV and battery production development projects. 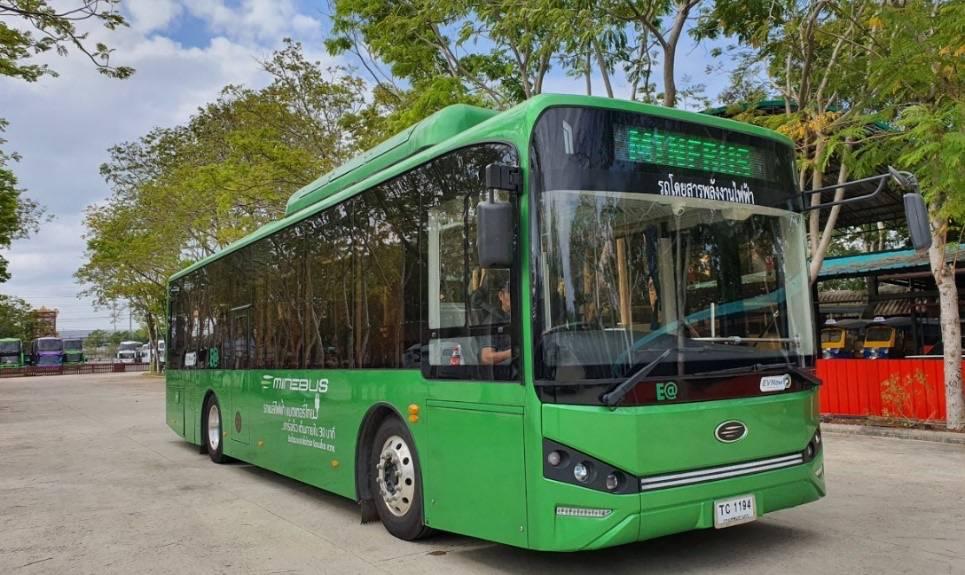 An electric bus developed by EA.

Manufacturers under the MG and Great Wall Motor (GWM) brands, which were in the spotlight during the Bangkok International Motor Show earlier this year, are going ahead with their EV plans by allocating several billion baht to grow the EV business in Thailand, including developing EV charging facilities.

MG received the most orders for EVs during the 12-day motor show, followed by Chinese sport utility vehicle manufacturer GWM.

SAIC Motor-CP and MG Sales (Thailand), the manufacturer and distributor of MG cars in Thailand, not only focus on car assembly, but also the development of batteries, which are a crucial component in EVs.

Pongsak Lertruedeewattanavong, vice-president of MG Sales, said the company has invested more than 2.5 billion baht to build an EV battery manufacturing plant and is conducting a study on how to manage used batteries.

MG Sales is not the first company to find ways to deal with unwanted batteries, which are expected to increase if more motorists use electric cars.

Mr Pongsak said the company was awarded "No.1 Brand Thailand 2021-2022" in the EV category in an August ceremony co-organised by Marketeer Magazine.

The Thai Board of Investment (BoI) is granting five-year corporate income tax exemptions to companies investing in the development of charging facilities with at least 40 chargers, 25% of which are of the DC type, said Narit Therdsteerasukdi, secretary-general of the BoI.

MG rival GWM is developing its EV business after announcing it would spend 22.6 billion baht to turn Thailand into its regional base for the EV industry.

GWM also wants Thailand to become a hub for EV R&D in Asean.

The company plans to start investment next year in EV battery manufacturing, with the first EV rolling off its Thai assembly plant in 2024, said Narong Sritalayon, managing director of Great Wall Motor (Thailand).

However, GWM is concerned the supply of some EV models may not meet motorists' increasing demand, at least in the short term.

The prolonged semiconductor shortage is stunting output of EVs. The company earlier needed to temporarily suspend bookings of its battery-powered Ora Good Cat as a manufacturing plant in China was affected by the chip scarcity, he said. 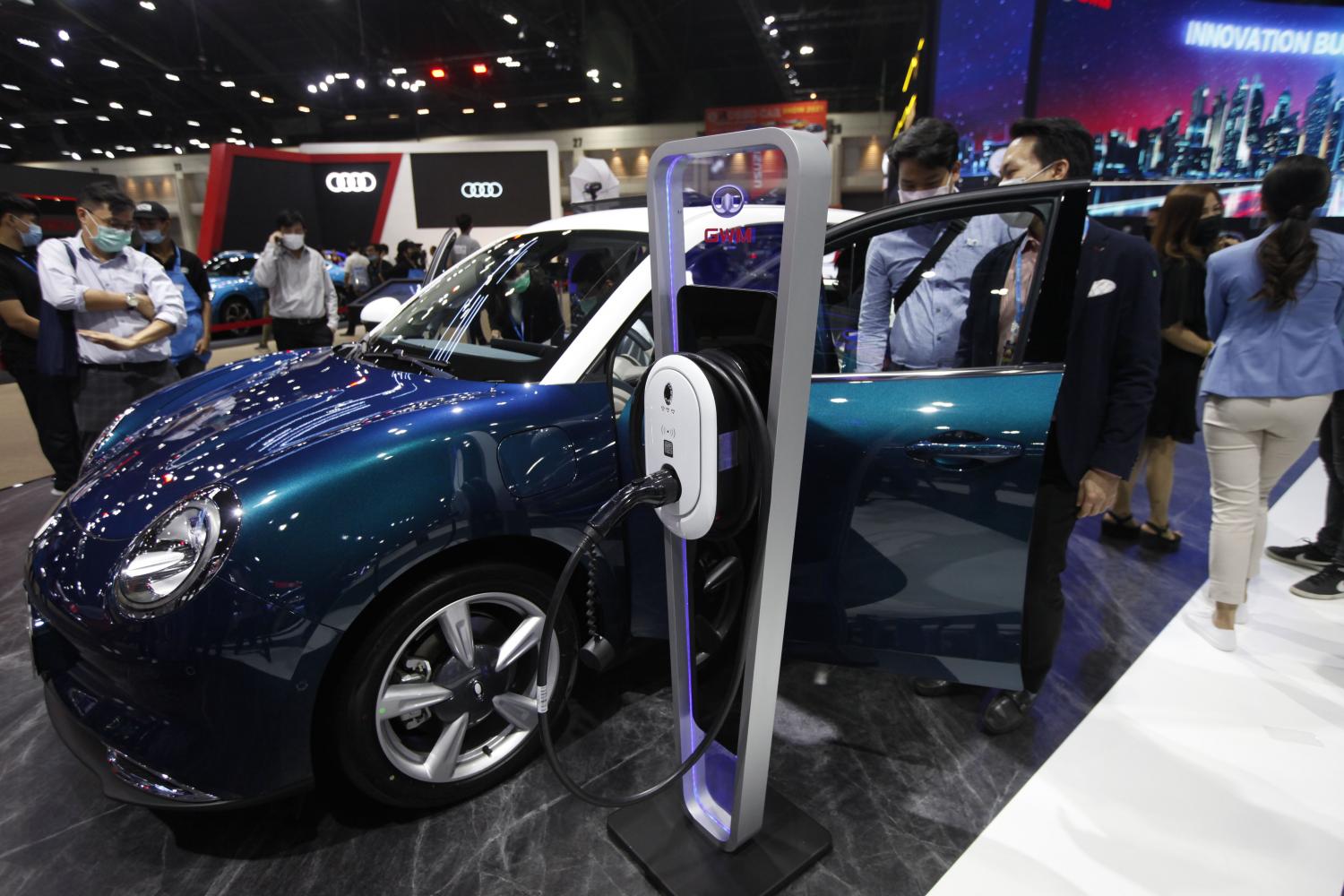 Japanese car manufacturers are also taking significant steps to grow their EV business in a move to maintain the popularity of Japanese car brands in Thailand.

Nissan Motor (Thailand) announced in June the company opened its first battery manufacturing unit outside Japan, producing batteries for the electric mobility system, particularly the one installed in the Nissan Kicks model.

The facility, located within its car assembly plant in Samut Prakan, is operated by Nissan Powertrain Thailand, with production capacity of 580,000 car engines and powertrains a year.

"Thailand is our important market in Asean and, with our Nissan Next business reform, we will make the country a major car production base in Southeast Asia," said Isao Sekiguchi, president of Nissan Motor Thailand, in June.

PHEVs and HEVs, which can run on either electricity or petrol, are believed to have a better chance in terms of sales potential than battery EVs (BEVs), which are entirely powered by electricity, because the EV infrastructure in Thailand is insufficient for mass BEV usage, said Tadashi Miura, president of Mazda Sales Thailand.

The Hiroshima-based company wants to market its EVs as the Thai government is promoting the use of more environmentally friendly cars as part of its efforts to reduce carbon dioxide emissions.

EA and national oil and gas conglomerate PTT Plc, neither of which manufacture cars, are also helping the country to drive the EV ecosystem.

After launching an electric boat service carrying people along a section of the Chao Phraya River between Nonthaburi and central Bangkok in 2020, EA is proceeding with a plan to assemble electric trucks and buses.

Last year the company delivered 120 electric buses to its customers. It is assembling more and plans to deliver 1,500 buses to operators.

Amorn Sapthaweekul, deputy chief executive of EA, said the company is focusing on commercial EVs as it expects higher demand from bus operators that want to avoid the impact of global oil price fluctuations.

EA's assembly facility is adjacent to its battery production factory in Chachoengsao.

The company plans to increase battery production capacity to 4 gigawatt-hours next year, up from 1GWh currently.

Meanwhile, PTT is cooperating with Taiwan-based Hon Hai Precision Industry Co, a multinational electronics manufacturer, to develop an EV assembly plant valued at US$1-2 billion within the EEC area.

The factory is scheduled to be operational in 2024, with production capacity of 50,000 units a year.

Noppadol Pinsupa, chief of the new business and infrastructure unit at PTT, said the two firms will begin the EV business by providing assembly of EVs for other car companies.

In the battery segment, PTT's wholly-owned Arun Plus Co formed a joint venture with PTT's power generation arm Global Power Synergy Plc (GPSC) to produce EV batteries, based on technology from Boston-based 24M Technologies Inc in the US.

Battery manufacturing is to be overseen by Nouvo Plus Co, which was jointly established by Arun Plus and GPSC.