Fallout from an 'economic war'
Business

Fallout from an 'economic war'

Thailand cannot avoid an impact from the tussle between Europe and the US against Russia over the latter's invasion of Ukraine, with a European slowdown projected to hurt exports

Containers are stacked at Bangkok Port. The value of Thailand's exports continued to rise for a 17th consecutive month in July 2022.

Thailand's customs-cleared export value continued to expand for a 17th consecutive month in July, but the growth rate slowed to 4.3% year-on-year after robust gains of 11.9% in June, 10.5% in May, 9.9% in April and 19.5% in March, which was the highest level since records began in 1991.

The slower pace of export growth in July was mainly attributed to a decrease in fruit shipments, a semiconductor shortage that affected production in related sectors, and lockdown measures in some major Chinese cities that interrupted production and lengthened delivery time.

The weaker growth could signal a trend for the remainder of the year, with Chaichan Charoensuk, chairman of the Thai National Shippers' Council, warning that high inflation globally, energy prices, freight rates and price volatility, as well as shortages of raw materials such as semiconductors, steel, cereals, animal feed and fertiliser, remain key threats to the prospects of the country's outbound shipments.

Kobsak Pootrakul, an economist at Bangkok Bank and chairman of the Federation of Thai Capital Market Organizations, predicted a new chapter in the global economic war is about to unfold after a meeting of Group of Seven (G7) finance ministers agreed on Sept 2 to impose a price cap initiative on Russian oil, aimed at limiting the Kremlin's funding of its war against Ukraine while keeping oil flowing to avoid price spikes.

In return, Russian President Vladimir Putin threatened to cut off energy supplies if price caps are imposed on his country's oil and gas exports, warning the West it would be "frozen like a wolf's tail", referring to a famous Russian fairy tale.

Europe usually imports about 40% of its gas and 30% of its oil from Russia.

Winter is approaching and some European leaders are concerned the gas supply will be insufficient to meet their needs. 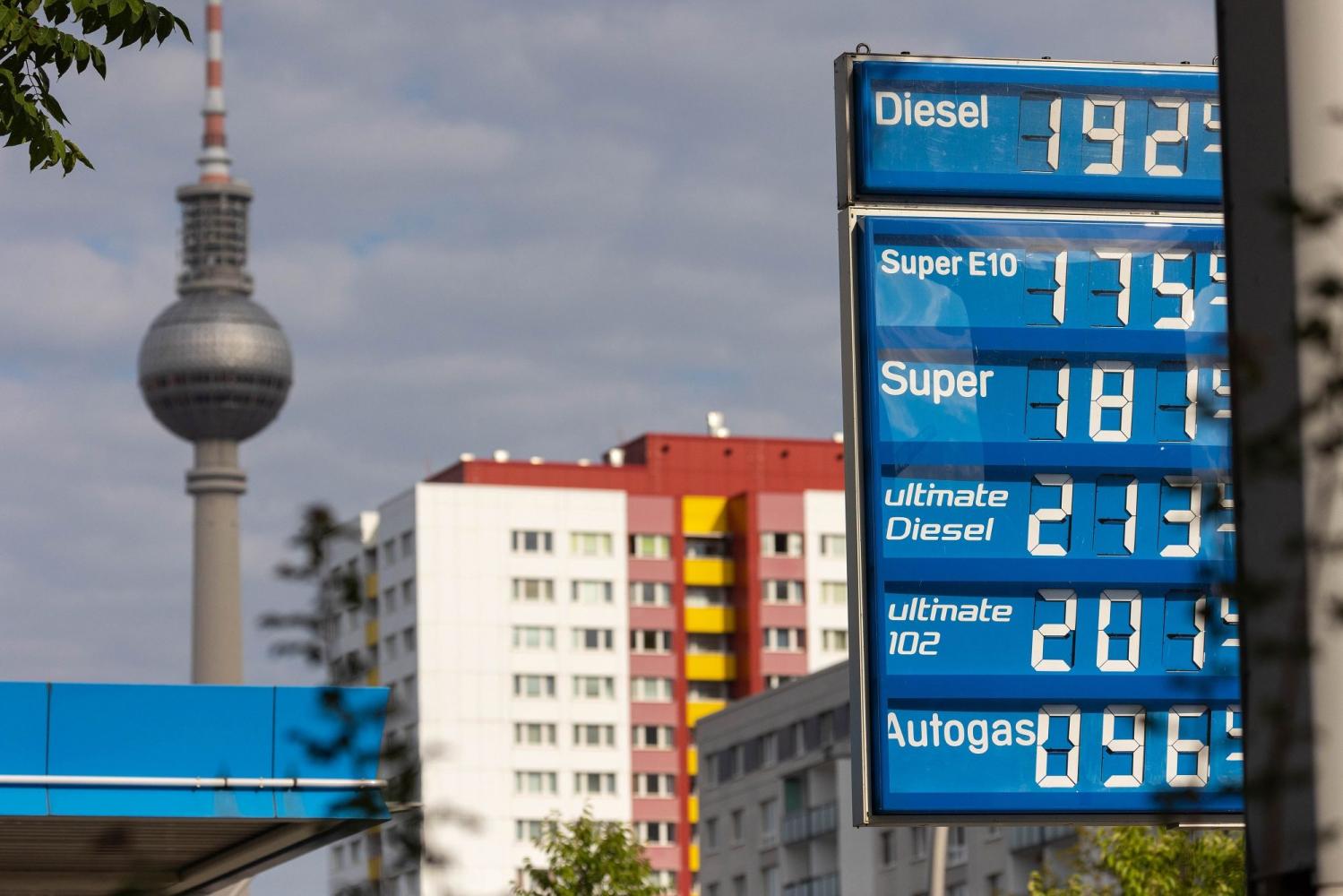 A fuel price sign at a gas station in central Berlin, Germany, on Aug 9, 2022. High energy prices are expected to continue to cause financial problems for manufacturers and households.  Bloomberg

Germany's energy regulator said energy prices are so high Europeans may have to share gas over the coming months.

Mr Kobsak warned the latest retaliatory measures between the G7 countries and Russia may trigger a faster and deeper global economic recession than expected.

It is unlikely Thailand can avoid the unpleasant impact of this new "economic war", which threatens to decelerate its exports, now a key economic driver for the country, said the Federation of Thai Industries (FTI).

The G7 leading industrial nations -- the US, Canada, France, Germany, Italy, the UK and Japan -- have decided to cap the price of Russian oil exports to the global market in a move to limit its funding of the war with Ukraine.

The EU is also preparing to completely stop its oil trade with Russia in December, according to media reports.

For its part, Russia stopped delivery of gas to Germany through the Nord Stream 1 pipeline indefinitely, citing a turbine engine malfunction.

The impact is going to be more pressure on energy prices, especially in Europe, escalating already high inflation and prompting central banks to curb the high prices of goods and services through interest rate hikes at the cost of a recession, said Kriengkrai Thiennukul, chairman of the FTI.

"Russia will never give in to Europe or the US, which want to weaken the Russian economy, draining its funding to support the war," he said.

"They are fighting each other in various ways."

Though this economic war may be taking place in Europe, it could have a major impact on Thailand, said Mr Kriengkrai.

The conflict could cause demand and supply changes for products in the global market, which would eventually affect Thai exports, he said.

In May this year, the Commerce Ministry announced the country's export sector grew by 11.1%, but in the remaining months of 2022 exports may decelerate until next year if the impact of the economic war intensifies, said Mr Kriengkrai.

Energy prices, which have soared since the Russia-Ukraine war broke out, will also continue to cause financial problems for manufacturers and households.

Factory owners who cannot manage or cut their operational costs may need to increase the prices of their products, with the burden passed onto consumers, he said. 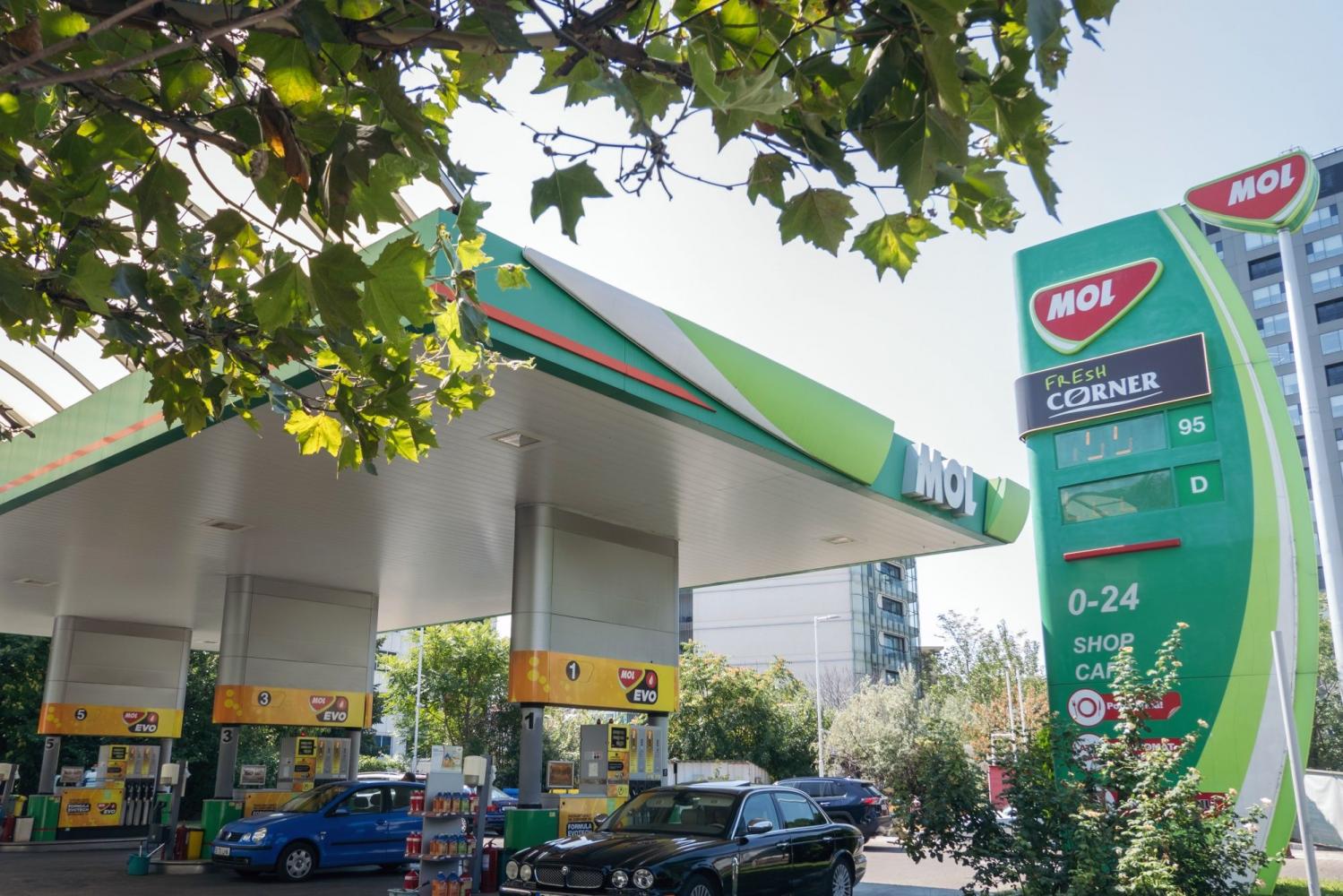 Motorists refuel at a gas station in Bucharest, Romania, on August 17. High energy prices are expected to continue to cause financial problems for manufacturers and households. Bloomberg

Thitima Chucherd, head of economic and financial market research for the Economic Intelligence Center (EIC), a research unit under Siam Commercial Bank, said key global economies including the UK, EU and the US have been showing clearer signs of recession.

The world's major economies have been declining as a result of tightened monetary policy, the energy crisis in the eurozone, and China's economic slowdown. However, the recession is expected to be a mild one, said Ms Thitima.

"The eurozone could enter into a mild recession first later this year to next year, mainly due to its energy shortage," she said.

Ms Thitima said the EIC predicts the eurozone would face higher tension because of the energy shortage, especially during the winter, with the problem expected to persist given the conflict between the EU and Russia over energy supplies.

The move raises the EU's risk for an energy shortage and signals a higher risk for an economic recession in the region, according to the EIC.

Russia recently announced it would cut gas supplies to Germany in the third quarter of this year to a range of 0-20% of normal capacity, while gas prices in the EU have reached record highs, attributed to the Russia-Ukraine war.

The reduced gas supplies slowed manufacturing activity in the EU in July and August, marking the first dip since 2020.

In addition, Ms Thitima said the economies in the US, UK and China slowed in the first half this year. The three major economies recorded a decline in GDP growth in the second quarter this year from the first quarter.

However, none of the three have entered into a recession yet, thanks to the solid financial condition of the private sector.

The EIC said it would take some time before these economies entered into a mild recession, either later this year to next year.

Sanan Angubolkul, chairman of the Thai Chamber of Commerce, said Europeans would be hardest hit by the latest round of this economic war, particularly the household sector as it relies heavily upon gas supplies from Russia.

According to Mr Sanan, the European economy is expected to shrink further because of the scarcity of gas supplies.

"The Thai private sector is keeping a close watch on the situation," he said.

"A fresh round of this economic war based on international conflicts is becoming clearly visible. Waging economic war as a tool to control another region is not good for anybody."

According to Mr Sanan, although Thailand is not directly involved, an impact would be inevitable as the European market is one of the country's key export markets.

More importantly, he said an indirect impact on the global supply chain is anticipated, especially a possible hike in the prices of certain raw materials and transport costs, which may affect Thai entrepreneurs.

"Given such risks, Thai entrepreneurs should be more cautious when doing business while trying their best to diversify risk, such as seeking new export markets or raw material suppliers, as well as coming up with protective measures against foreign exchange risks," said Mr Sanan.

Chamnan Srisawat, president of the Tourism Council of Thailand, said the nation cannot avoid the headwinds from an economic war and inflation, which could create an economic recession as these are global phenomena felt by many countries.

The countries affected by this conflict are also important partners for Thai tourism, said Mr Chamnan.

Thai tourism has gradually recovered from rock bottom as the industry, which generated 17% of GDP prior to the pandemic, saw its value plunge to 2.8% of GDP in 2021. Overall expenditure was around 450 billion baht last year, a 49.2% decrease from 2020.

He said the industry has to adjust its tourism strategies by pivoting more to Southeast Asian markets, which face less of an impact when compared with Europe and the US.

Travel demand from Malaysia and Singapore was very strong after the full reopening in July and could help strengthen the revenue contribution from short-haul markets, said Mr Chamnan.

"As tourism industry leaders discussed this matter with each other, we concluded that Southeast Asia could help cushion the impact from a possible economic recession," he said.

However, as the high season is approaching, the industry should not give up hope on long-haul markets as this period provides the only opportunity to boost demand from every market, said Mr Chamnan.

He said there are no more natural obstacles in the fourth quarter such as the monsoon season.