Caught in a vicious currency cycle

Companies want intervention to slow the baht's decline, but much of the activity is driven by the US dollar and there are negative consequences to repeated interest rate hikes

A man walks past an electronic board displaying forex prices at a currency exchange on Sept 30. (Photo: Pornprom Satrabhaya)

Industry leaders have called on the government and related authorities to do more to prevent the depreciation of the baht and mitigate the impact of the Bank of Thailand's latest policy rate hike.

Yet market analysts point out there are several good reasons for the central bank to proceed cautiously in its embrace of interest rate increases as they could dampen the projected economic recovery.

Last week's decision by the central bank's Monetary Policy Committee (MPC) to raise interest rates by 25 basis points came as no surprise, but the Federation of Thai Industries (FTI) wants to see more action from the government to slow the weakening of the baht.

The group also asked the government to deal with the subsequent impact after the benchmark interest rate was increased to 1%, as it will heap a greater financial burden on entrepreneurs.

Kriengkrai Thiennukul, chairman of the FTI, said the central bank and the Finance Ministry need to work together to determine an appropriate value of the Thai currency and its impact on the economy. More measures dealing with the baht are needed, he said.

Mr Kriengkrai said the value of the baht may fall further if there are no additional actions to deal with it.

"It can fall to 38 baht to the dollar, which strengthened after a significant interest rate hike by the US Federal Reserve," he said.

US interest rates are expected to rise to 4.4% by the end of this year, causing other currencies to weaken.

"If we do nothing, the baht may fall to 39 to the dollar and keep declining," said Mr Kriengkrai.

Policy rate hikes are seen as a necessary move to curb baht depreciation, which increases prices of imported oil and gas as well as raw materials.

Thailand imports much liquefied natural gas, which is currently expensive, as the country uses it as fuel for electricity generation.

Higher energy and production costs will put more pressure on manufacturers, who may need to increase prices of goods in the domestic market. This will consequently drive up inflation even higher, he said.

Marisa Sukosol Nunbhakdi, president of the Thai Hotels Association, said policy rate increases will increase the burden on hotels as most of them are reliant on bank loans, particularly for paying salaries as they attempt to lure back employees.

With banks expected to increase their interest rates soon, hoteliers' hopes of making a profit this year are rapidly diminishing, she said. On top of the rate hikes, many costs are increasing this year, including electricity, labour, raw ingredients for food, and the land and building tax, which now requires payment of the full levy.

Mrs Marisa said hotels have to absorb those fixed and variable costs by themselves, including higher interest rates, unlike airlines, which can increase the fuel surcharge on ticket fares to offload additional costs onto passengers.

"Hotels cannot immediately raise room rates to offset surging operational costs as tourist demand remains relatively feeble compared with existing supply," she said. "Mid-sized and small hotels suffer the most as the mass market, their main target, has been affected by the global economic recession."

Mrs Marisa said the baht depreciation against the dollar seems to be an advantage for inbound tourism, but only luxury operators greatly benefit from this trend as high-end travellers tend to prefer five-star hotels.

"A lot of mid-tier properties that previously claimed the mass market or tour groups from Asia as their main clients still struggle to maintain profit because not every Asian country has fully reopened, particularly China," she said. "Tourists with higher spending power from currency appreciation won't likely choose three-star hotels or lower."

Mrs Marisa said the upcoming high season might bring more guests to all hotels, but the revenue from this period alone will not compensate for earlier sluggish months as operators had to invest to reopen, spending on employment and preparation of services.

The baht could slip below 40 to the dollar in line with other Asian currencies' depreciation against the greenback as the Fed continues to lift its rates, said Chanchai Kultavarakorn, executive chairman of ASL Securities.

He said even with the Bank of Thailand's rate hike, the baht is likely to hit 40 to the dollar as the Fed seems to be ignoring the impact on other currencies. The Fed stated it will continue to raise its rates until inflation eases to its target of 2%, down from 8.3% last month, with rate hikes continuing into 2023.

Other countries are also worried about the depreciation of their currencies, prompting financial authorities to make currency interventions or introduce quantitative easing by injecting money into the system to reduce volatility in the bond market.

As the global dollar supply is huge, no country can resist capital outflows. This ultimately weakens the stability of many countries' reserve funds, causing currencies to depreciate further, said Mr Chanchai.

If central banks continue to lift rates to stop monetary outflows, domestic economies will be affected with both businesses and borrowers shouldering a higher interest burden amid unfavourable economic conditions, he said. 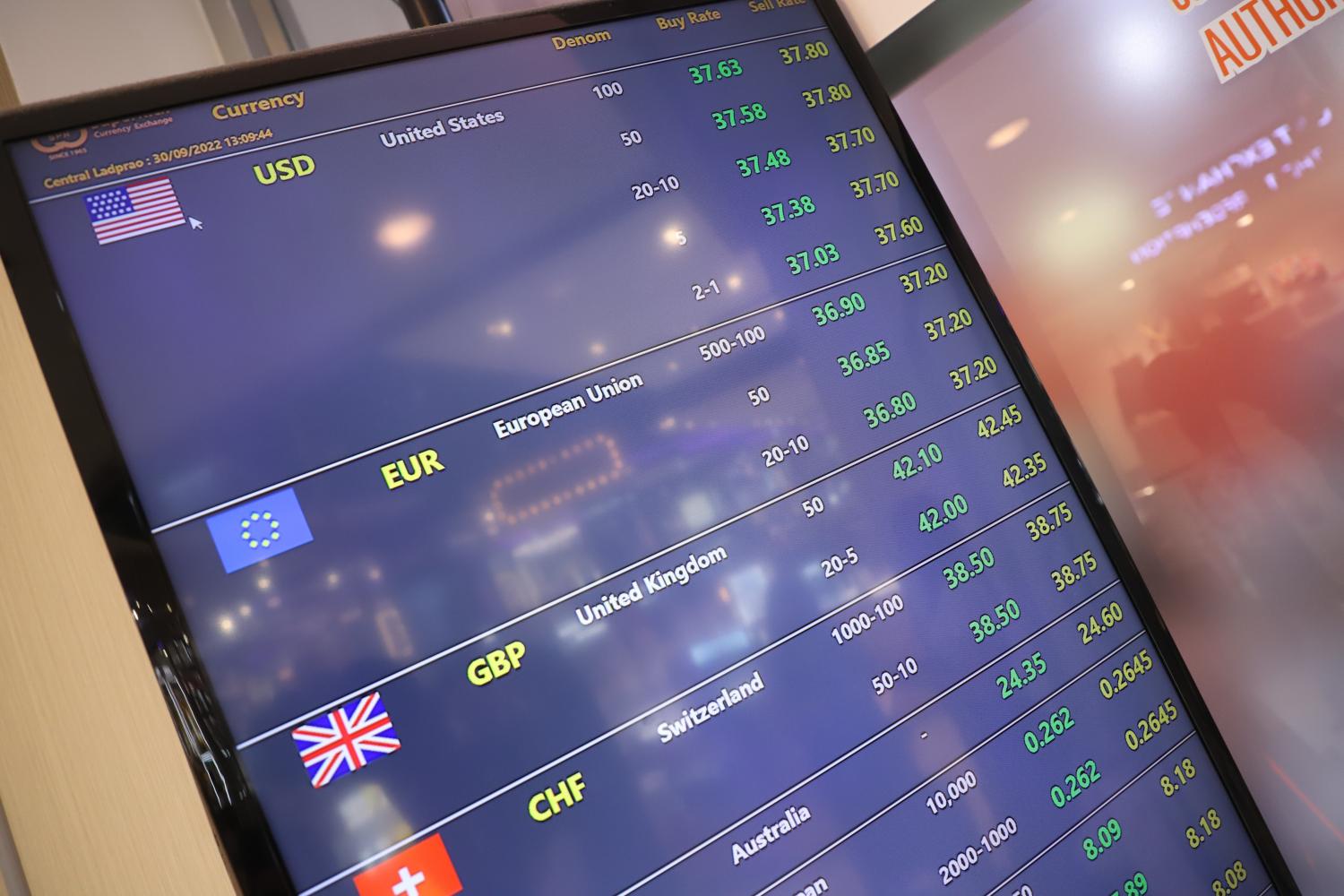 Forex prices are displayed at a currency exchange on Sept 30. Pornprom Satrabhaya

The situation could worsen if a country falls into economic crisis and businesses are forced to sell assets cheaply to pay off debt. That situation would be similar to Thailand's experience during the Asian financial crisis in 1997, Mr Chanchai said.

In Thailand, he said it was too late to prevent foreign capital outflows because US interest rates have been raised many times, with a lot of money already moved out of the country.

"I believe Thailand should not play according to the US game because we can't resist the huge dollar flows. The Thai rate does not need to be raised as much as the US rate. Authorities should monitor the situation until the US cuts its interest rates," he said.

"Until then, many countries will have problems. But the Thai private sector remains strong. Many listed companies are still profitable and growing from both domestic and international expansion. Foreigners will return to invest in Thailand, pushing the baht to appreciate.

"When any financial or economic crisis happens, the same cycle occurs. But this time, Thailand's foreign exchange reserves and the private sector are strong. Consumers have high household debt, so raising rates would increase costs in the economy even more and shrink consumer purchasing power."

To support the economic recovery, Mr Chanchai said Thailand should focus on promoting the tourism sector to take advantage of the depreciating currency, as many countries are doing.

"Thailand is one of the most famous countries for tourism. We should make the most of this opportunity," he said.

Last Wednesday the MPC raised the policy rate by 0.25 percentage points to 1% in a bid to tame high inflation amid an uneven economic recovery.

The MPC said the overall growth and inflation outlook is consistent with its previous assessment. In August the MPC raised the rate for the first time in nearly four years, by 0.25 percentage points to 0.75%.

Sethaput Suthiwartnarueput, governor of the Bank of Thailand, said last week the central bank is prepared to keep raising the policy rate if core inflation rises faster than predicted.

Core inflation increased during the past four months on a month-on-month basis, but the growth slowed in late August.

The central bank is ready to act, either maintaining the current rate or raising it by as much as 50 basis points, depending on the situation, Mr Sethaput said. He said the MPC could calibrate the measures in response to the situation, including holding an extra meeting if circumstances change, such as dramatic baht volatility.

Although the baht has weakened by 12.1% against the dollar year-to-date, the depreciation is in line with other currencies as the main reason for the movement is the stronger dollar, Mr Sethaput said.

He said the baht's depreciation will not affect Thailand's economic recovery or result in a significant surge in inflation. For every 1% the baht weakens, the headline inflation rate will increase by only 0.06%, said Mr Sethaput.

Banks have started to increase their deposit and loan rates following the rate hike, but promised to help vulnerable retail borrowers deal with the impact of rising interest costs.

Sanan Angubolkul, chairman of the Thai Chamber of Commerce, said the Bank of Thailand's moderate policy rate increase may trigger capital flight and put further pressure on the baht.

However, he still believes the value of the baht remains manageable and can deliver a positive effect for the Thai economy, especially the tourism sector.

Mr Sanan said inflationary pressure in Thailand was likely to calm down as world oil prices have started to stabilise at US$75-85 per barrel.

Chaichan Charoensuk, chairman of the Thai National Shippers' Council, sees the central bank's latest rate hike as appropriate. However, exporters are calling on the government to closely monitor the baht to make sure it moves in line with other regional currencies.

Somsak Pejthaveeporndej, chief executive of IT distributor VST ECS Thailand, said the depreciation of the baht to 38 per dollar, down from 32, is affecting a broad range of businesses, including the IT sector.

"The company is proceeding with currency hedging to mitigate the impact and help our resellers," he said.

Policymakers should find ways to address the weakening baht as it is not good for the economy, said Mr Somsak. Those who import raw materials or ingredients could be in jeopardy because of rising costs, he said.

A rapid depreciation of the baht would trigger speculation, so the government should intervene to ensure it is not weakening too fast, Mr Somsak said.

Thapana Sirivadhanabhakdi, chief executive of Thai Beverage (ThaiBev), the Singapore-listed food and beverage company, said the weak baht is also a challenge for the company.

However, he said ThaiBev has so far felt little impact from the baht slump as the company ordered some raw material imports a year in advance.

"We expect the baht weakness to affect only malt and aluminium, the key raw materials for our spirits business," said Mr Thapana. "We already adjusted our business plan by buying our raw materials in advance."

However, he said for the longer term the company would have to pass on higher production costs to consumers if the baht continued to weaken, eventually affecting overall production costs.