People watch a live broadcast of Mr Xi's speech during the introduction of the Communist Party of China's Politburo Standing Committee, on a screen at a mall in Qingzhou, in eastern Shandong province on Oct 23. AFP

China has been locked into a zero-Covid policy since early 2020, enforcing aggressive pandemic border controls and implementing public health measures such as mass testing and city lockdowns that have severely affected global supply chains.

Before the 20th National Congress of the Chinese Communist Party, Thai operators were optimistic that these rules would be gradually eased, particularly travel restrictions.

But when the congress closed on Oct 22 with Xi Jinping securing a third five-year term as president, such hopes had dimmed as Chinese leaders said they wanted to continue with zero-Covid to protect people's lives.

China's GDP growth of 3.9% in the third quarter outperformed many forecasts, but questions remain about how long border controls and zero-Covid policies can last, as foreign investors as well as wealthy Chinese start to look elsewhere for a more convenient business environment.

Sisdivachr Cheewarattanaporn, president of the Association of Thai Travel Agents, said a definitive conclusion on China's reopening might not happen this year, following the completion of the congress and the new appointments to the politburo standing committee.

He said the Two Sessions meeting next March is important to watch because typically the roadmap for both economic and social policies are announced after this meeting.

"China may ease international travel restrictions at this time, as we've seen this year the mainland gradually softened a few restrictions. But a full reopening might have to wait until longer," said Mr Sisdivachr.

He said international flights and arrival numbers from China might pick up over the following year, but it would be mainly from the business sector, not the leisure market.

"There are a lot of Chinese residing in other countries or conducting business with foreigners. The expansion of flights was meant to serve those purposes, rather than mass tourism. The large conferences and meetings from Chinese companies in Thailand recently drew participants from overseas branches, with a small number flying directly from the mainland," Mr Sisdivachr said.

Meanwhile, a property agent who requested anonymity said new sales of residential units in Thailand to Chinese buyers have been rising in recent months, largely attributed to China's political uncertainties and strict policies.

"Many of the super-rich in China have sought second homes overseas, including in Thailand, since something happened to Alibaba's Jack Ma and other founders of tech firms. This group is uncertain about its fate," the source said.

Phuket came third with units priced between 10-50 million baht, and the majority being villas.

Buyers of houses or villas mostly bought the units through a company they set up in Thailand.

"There will be many more Chinese buying Thai property, particularly houses with land, as the government recently decided to allow foreigners to own one rai of land if they buy Thai bonds worth at least 40 million baht," the source said.

Since August 2021, a large number of wealthy Chinese have bought Thai properties as a second home. Part of the attraction is the existence of a Chinese ecosystem in Thailand, particularly various regional Chinese restaurants, said the source.

"More than 90% of wealthy Chinese with a net worth of more than US$10 billion now hold a Singaporean passport," said the source. "Many bought a unit in Thailand and used other passports to get a long-term visa." 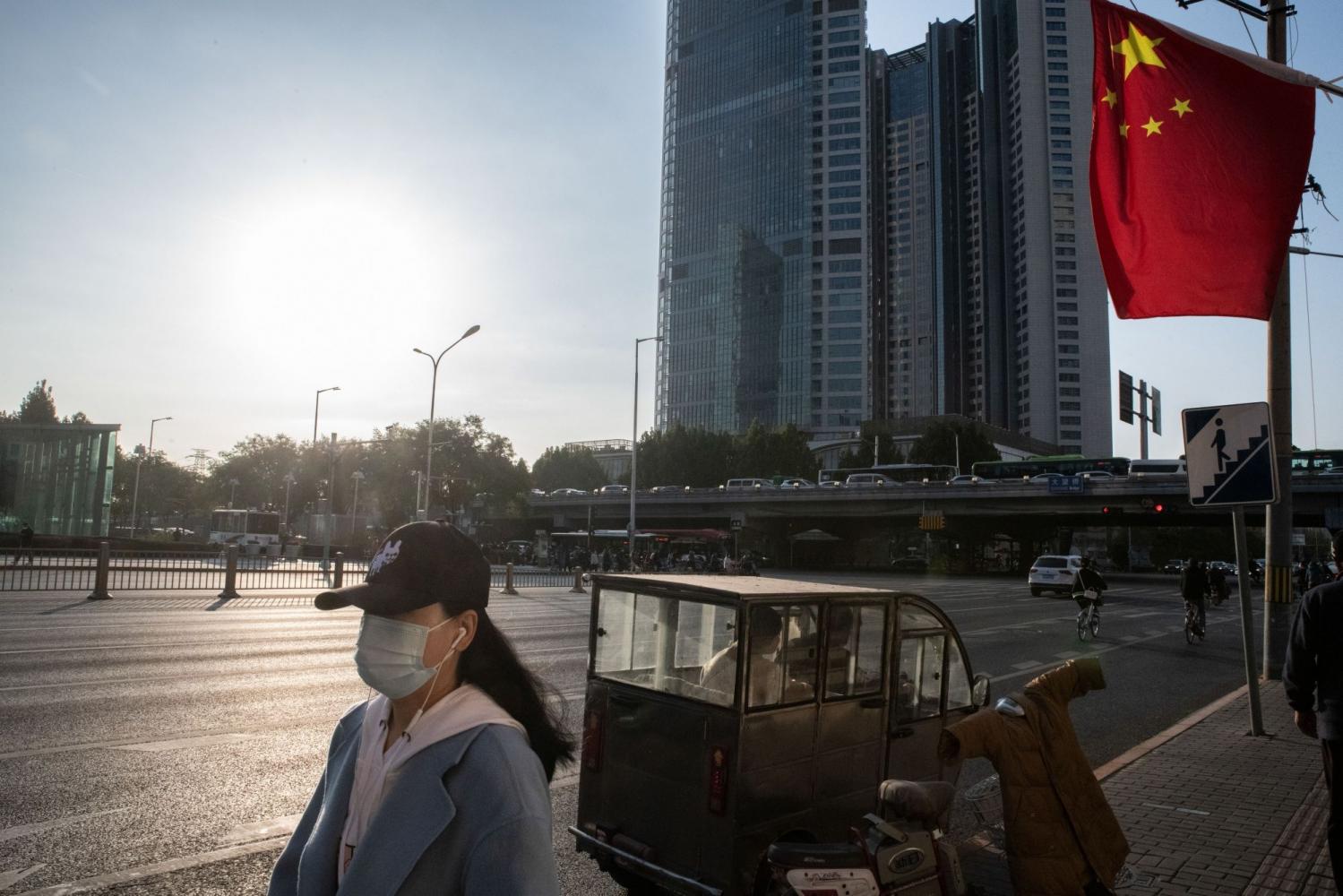 A pedestrian walks past a Chinese flag in Beijing on Oct 24. The yuan has weakened in recent months. Bloomberg

Sanan Angubolkul, chairman of the Thai Chamber of Commerce, said while Mr Xi insisted he would stand firm on the zero-Covid policy, China is expected to relax certain aspects of it to boost the economy.

"China is likely to gradually relax its measures soon, as Beijing already allows Chinese students to travel to Thailand for study, as well as Thai students studying in China. Chinese entrepreneurs who invested in Thailand are allowed to travel in and out the mainland," Mr Sanan said.

He said more Chinese businesses and tourists are expected to visit Thailand next year, playing a key role in the revival of the Thai economy.

"Thailand can be the EV manufacturing base for Chinese distribution in Asean, while China can make use of Thailand's free-trade agreements to boost its exports."

He said many large Chinese companies are looking to expand their investments in Thailand, citing car manufacturer BYD which recently decided to build an EV production plant in the country.

He said the chamber recently established a Thai-Chinese working group to work with China's embassy in Bangkok to study trade and investment obstacles, as well as the ways the two governments can support each other.

In addition, the Thailand-China Investment Forum is scheduled in early November before the Asia-Pacific Economic Cooperation summit. The forum is intended to strengthen Chinese-Thai trade and investments.

Mr Sanan said Thailand's food industry holds potential, as products such as durian are popular in the Chinese market.

Another five-year term for Mr Xi will put China on a path towards its goal of becoming a modern socialist country, with key socio-economic policies continuing to impact the world economy, said the Federation of Thai Industries (FTI).

Mr Xi's draconian zero-Covid policy, whose lockdown measures are blamed for disrupting global supply chains, will remain in place as he said the safety of Chinese people is his priority in dealing with the virus.

Yet Kriengkrai Thiennukul, chairman of the FTI, believes this policy may soon be adjusted or terminated.

The zero-Covid policy, with tight travel restrictions to and from China, was especially crucial during the peak of the pandemic and the lead-up to the recent week-long congress, said Mr Kriengkrai.

Mr Xi needed to assure people that he and the party could contain the spread of the virus, he said.

Thailand should reap the benefits once zero-Covid is terminated, allowing Chinese to travel outside the country, with this country a favoured destination, he said.

Other economic and political policies under the Xi administration will have a varied effect on the international community, said Mr Kriengkrai.

For example, he expects a push for "Made in China 2025", a key state-led policy aimed at boosting the industrial value chain, to gather momentum.

Beijing wants to make the country a world leader in 10 key industries, notably robotics, information technology and artificial intelligence, by 2025.

Mr Kriengkrai believes this policy is not only good for China, but can also help drive the global economy.

The US-China trade war is expected to continue and must be closely monitored because actions by these two powers can affect the global economy, he said.

China's tough stance on Taiwan, which Beijing regards as a breakaway province, will continue, adding to concerns over the impact on global supply chains because Taiwan is a large producer of semiconductors, said Mr Kriengkrai.

He said China's economic policy during Mr Xi's third term was revealed at a recent meeting, with a clear indication of the direction of trade and foreign policies.

Mr Xi clarified that under his leadership, China was keen to open up to countries and establish free-trade zones to facilitate foreign investors, along with setting up a free port on Hainan Island and other infrastructure under the Belt and Road Initiative.

The country is also a major Thai trading partner. In 2021, China was Thailand's second-largest export market, with a value of $36 billion.

In addition, Chinese companies are major foreign investors in Thailand. More than 200 Chinese projects were submitted to Thailand's Board of Investment for promotional privileges in 2021, with a total value of 262 billion baht, followed by Japan with a value of 73.1 billion.

Chinese EV companies invested in Thailand this year. BYD invested more than 17 billion baht, while Taiwan-based Foxconn set up a joint venture with PTT Plc with a value of more than 30 billion baht.

"Thailand has a competitive advantage in the automotive industry's supply chain, and there are more Chinese EV companies looking to invest here," Mr Trawut said.

Stable economic growth was frequently mentioned at the recent Chinese leadership meeting, he said. The Chinese government emphasises economic parity with a focus on quality rather than quantity, said Mr Trawut.

"It is clear China's economy will grow by less than 5.5% this year, but even 4-5% growth for the world's second-largest economy is a challenge," he said.

However, Chinese Premier Li Keqiang is likely to help the economy grow in the future, said Mr Trawut.

He said Thai stock investors can accumulate Chinese technology stocks during this period because the price has dropped considerably. These stocks have the opportunity to grow in the future, thanks to China's innovation policies, said Mr Trawut.