SMEs urged to look beyond Thailand

The courage to venture to foreign nations, market knowledge and easier access to loans are the key factors that can support SMEs becoming exporters, according to lenders and industry leaders.

The courage to venture to overseas frontiers and easier access to loans are the key factors to facilitate small and medium-sized enterprises (SMEs) becoming exporters, according to lenders and industry leaders.

Rak Vorrakitpokatorn, president of the Export-Import Bank of Thailand (EXIM Thailand), said only a few of the 3 million SMEs succeed in becoming exporters, mainly because of their hesitance in venturing away from home turf to compete abroad.

He said most SMEs are still focused on the domestic market, which has around 70 million consumers. If only they dare to step outside of Thailand's borders and target their Asean neighbours, they will find a huge market of around 600 million with high demand for made-in-Thailand products.

Mr Rak said in order to equip small entrepreneurs with the courage and knowledge to venture outside the local market, EXIM Thailand launched an intensive training/workshop programme to prepare them for the export supply chain. Top X Executive Program Class 1 is a short-term course for business owners and executives in export business development and enhancement. It is a collaboration with the Thai Chamber of Commerce, the Thai Board of Trade, the Federation of Thai Industries (FTI), the Thai National Shippers' Council and the College of Management at Mahidol University.

The programme also offers credit facilities and a list of potential buyers to participants to encourage them to export products.

He said because some enterprises complain about the difficulty in obtaining loans from financial institutions, this programme can help them understand how bankers consider loan applications and offers guidance on how entrepreneurs can qualify for such financing.

FTI chairman Kriengkrai Thiennukul said exports remain the key driver of the country's economy, especially during the pandemic when shipments continued while other engines were disrupted.

However, exporters have to adjust to the new challenges brought by more global uncertainties, said Mr Kriengkrai.

Echoing Mr Rak, Mr Kriengkrai said the new generation of entrepreneurs should dare to grow outside the country as the Thai market is getting smaller.

Somphat Satanavat, 40, owner of Ohmmy Jelly, a maker and exporter of jelly desserts, recalled that his business was affected because he failed to keep up to date on the import regulations in a certain market.

The company's shipment reached the destination, but was denied entry because of the change in import regulations.

Mr Somphat said financial institutions should relax lending regulations for small businesses if the country wants to encourage them to become exporters.

He previously worked with a company selling jelly desserts to a factory in Thailand before resigning to set up Ohmmy Jelly in Songkhla province. 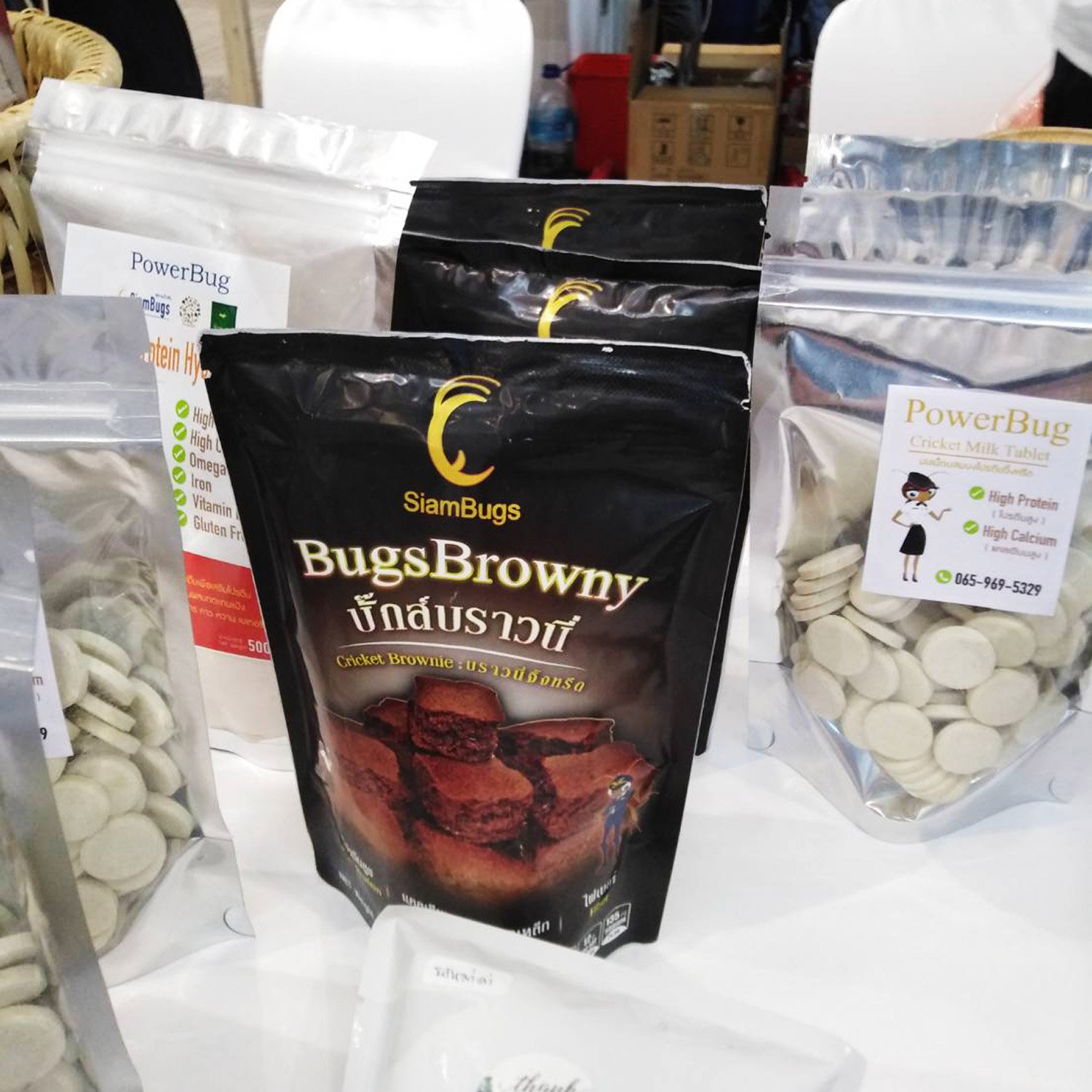 SiamBugs products are made from cricket protein and the majority of output is exported overseas.

The biggest obstacle was obtaining loans from financial institutions to expand production capacity, even though he had a sales record and other documentation, said Mr Somphat.

He said lenders kept asking for more documents for several months, until finally he had no hope of obtaining a loan.

Later Mr Somphat contacted EXIM Thailand, which helped his company adjust some business processes and accounting, enabling Ohmmy Jelly to obtain an EXIM Thailand loan as well as loans from other banks.

The company targets revenue of 22 million baht this year before jumping to 60 million next year.

He said Ohmmy Jelly's export markets of Cambodia, Laos, Myanmar and Vietnam are expected to contribute 70% of revenue this year, with the rest from the local market.

Mr Somphat said the company wants to tap Islamic markets as its products have halal certification.

He said the Thai jelly dessert market has little competition, with only seven manufacturers and a total market value of 2.5 billion baht.

The company is focusing on developing innovative products. It holds a number of patents for jelly desserts, such as jelly made from flowers as well as coffee mixed with palm tree sugar.

Company founder Suwimon Chantajohn said initially she was not fully confident the products would be successful because people might feel hesitant about eating cricket-based products. However, she now has a strong intention to develop the products for export. 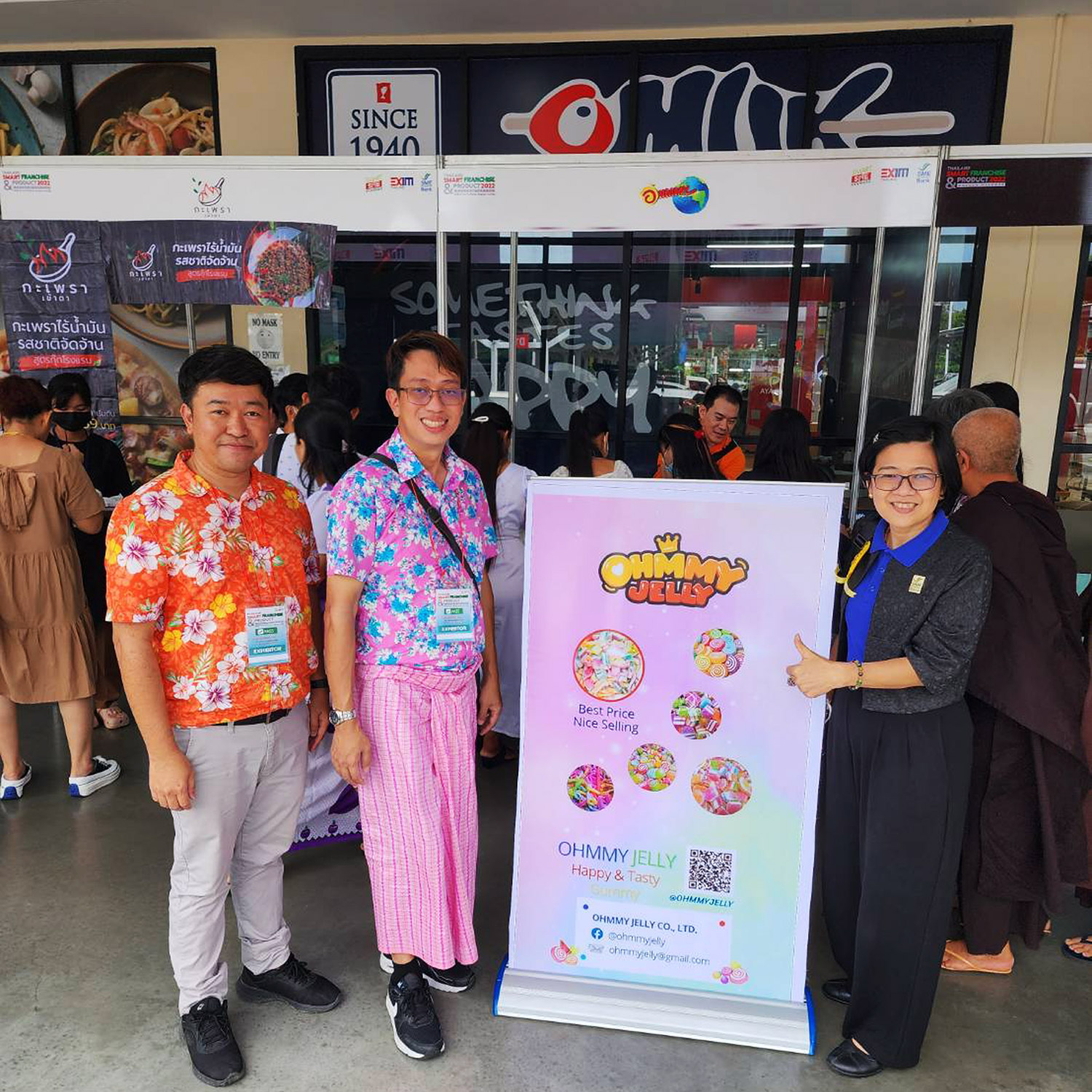 Mr Somphat, second from left, during a roadshow for Ohmmy Jelly products in Myanmar.

Many markets are interested in cricket-based protein, said Ms Suwimon. She said crickets yield higher protein than some meats of the same weight.

Most SiamBugs products are exported and many importers, including those from Japan, Brazil, Mexico and China, have visited her farm to inspect the products.

Ms Suwimon said Thailand has a lower cost to raise crickets than many other countries.

The value of insect products in the global market is expected to be US$2.8 billion in 2030, said the research house.

Thai exports of such products is projected to reach 11 billion baht in 2030, according to Krungthai Compass.