Discipline, determination and versatility help keep chief of Central Retail Corporation on top of his game.

When Tos Chirathivat was growing up, his sisters said he wasn’t cut out to be a businessman because he was too quiet. 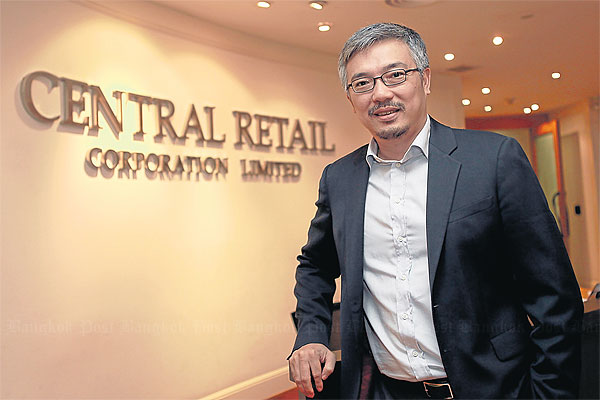 But a studious nature that spans science, arts and business has clearly served him well in 10 years as chief executive officer of Central Retail Corporation (CRC), the largest business unit of Central Group of Companies. Among the dozens of executives in the companies controlled by the Chirathivat family, he has stood out as a leader of growth not only in Thailand but also globally.

His father, the late Samrit Chirathivat, was the eldest son of Tiang Chirathivat, who founded Central Department Store in the 1950s. It was significant that the mission of running what is now a retail colossus was given to Samrit’s youngest son and not his oldest daughter.

Tos recognised his responsibility toward his family from an early age. At 14 he asked his father if he could study in the United States. At high school in Miami, he recalled, he excelled at science. The first occupation he had in mind was not a businessman, but either an engineer or a physician.

“I’m good at calculation. Some people say my brain is like a computer. And as a boy, I liked cars, so I thought of being an engineer who designed cars,” he said. “I thought it would be great if I could design beautiful cars for BMW or Porsche.”

Medicine and medical studies also held a strong attachment for the young student, and a career in retailing might never have materialised if Tos’s oldest sister, a physician herself, hadn’t sat him down for a talk.

With a laugh, he recalls the moment when his sister told him that being a doctor was not that much fun. She suggested her brother study business instead so that he could come back to Thailand and run Central Group.

“I was not forced [into business] by my father. He actually once wanted to be a physician as well. But as the oldest son of my grandfather, he had to run the family business. And when my eldest sister wanted to study medicine, my father allowed her to do so.”

Tos chose to pursue his business studies at Wesleyan University in Connecticut, where he earned a Bachelor’s Degree in Economics. He also spent some time at London School of Economics before he graduated with an MBA in Finance from the Columbia University in New York City.

Many young people celebrate the end of their studies by taking some time off to travel and see the world, but the only trip Tos took was on a plane back to Bangkok to work.

“These are the ways the Chirathivat family teaches children, which I think is good for us.”

The work ethic has served the descendants of Tiang Chirathivat very well. Last year Forbes magazine estimated the family’s net worth at $6.9 billion, making them the second wealthiest family in Thailand, with interests that span retailing, property, hotels and restaurants.

Tos started with Central Group at age 24, and while he’s quick to acknowledge that while he did not have to suffer, he knew he was different from others as he had great responsibility awaiting him. His first job at the young age of 24 was as project development director at Central Pattana Plc, the group’s commercial property and shopping mall flagship. 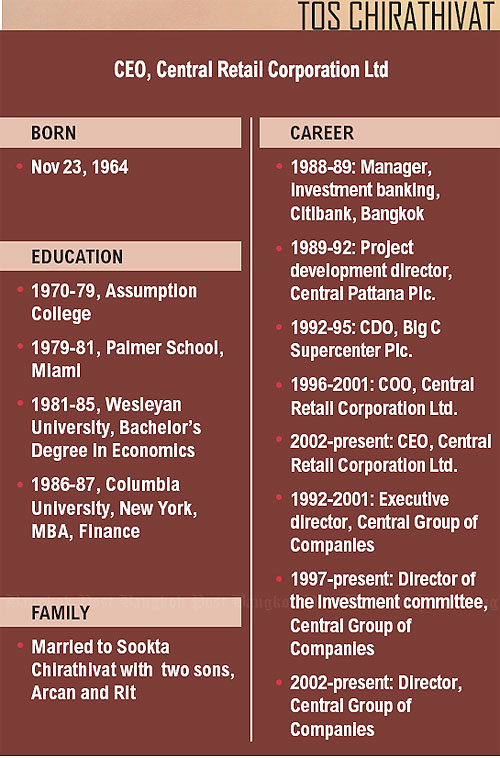 “I was on the board since day one with Central, getting the big jobs. I told myself I had to continue growing Central Group from my first day. I didn’t come just to learn but to take action.”

From day one, he set his target to build on what his father had created. Twenty-five years ago, Central’s assets were valued at around US$100 million. Tos set his sights on $1 billion, which would be similar to a decent-sized corporation in the US.

In the early days he was buoyed by the presence of his father, but Samrit passed away when his son was just 28, and Tos faced tough times. As the youngest manager in the group, Tos had to explain and justify a lot of decisions to his many older relatives, who were in the top positions in Central Group, and he resolved to work even harder to overcome the difficulties.

When asked how many hours he worked per day, he smiled and said “24”. Every minute was a working minute, time for less talk and more action.

“Looking on the positive side, losing my father made me stronger. But I was very tired. I would have been more comfortable if my father had stayed with me longer,” he admits.

The struggles continued for 10 years before he was satisfied that the business was heading in the right direction. He admits that he felt tired sometimes, but his strong intentions to expand the company encouraged him to continue.

“The education system in America teaches students to fight. They prefer winners and will celebrate the ones who are successful. I grew there and spent nine years in that education system. So, I will not give up easily.”

After a decade as the CEO of CRC, the once-quiet boy has proved to his family and the business world that he can run the core business of the Chirathivat family. He attributes his success to a combination of interests in science, arts and business.

Businessmen have to be good at calculation, a subject in which he qualifies well enough. Retailers need to know about shop design and decoration and other factors that attract consumers to visit and spend money.

“I’m an all-rounder. I’m good at science, arts and business. These are my advantages.”

Apart from retail business, Tos also has his own property business with his wife, Sookta Chirathivat, which originated from his passion for design. The couple operate Sala Resort and Spa outlets in tourism destinations, including Khao Yai and Koh Samui.

CRC is growing not only in the domestic market, but also overseas. It will open the

first Central Department Store at Grand Indonesia Shopping Town in Jakarta in 2014. It is also looking for an opportunity to tap the increasing demand in fast-growing Asean.

Asked what has made him most proud in running the company, Tos mentions the founding of CRC itself, which was his own idea.

“Formerly, we had only Central Department Stores,” he explains. “When I was studying for my master’s degree, I learned about retail businesses around the world and realised that this business is really big.

“Central cannot be only a department store. This was the beginning of our success. If we remained just as Central Department Store, we could not have grown as big as we are today.”