Made in Cambodia
Business

Foreign industry ready to gear up in Asia’s next low-cost manufacturing base.

More than a decade ago, global manufacturing companies staged a mass exodus to Asia in search of low-cost alternatives to increasing domestic wage demands and operational costs. They expanded the regional supply chain that had formed in countries such as Vietnam and Indonesia, while taking advantage of low wages offered by the world’s largest exporter in China. The strategy bolstered many a bottom line, but now things are changing. 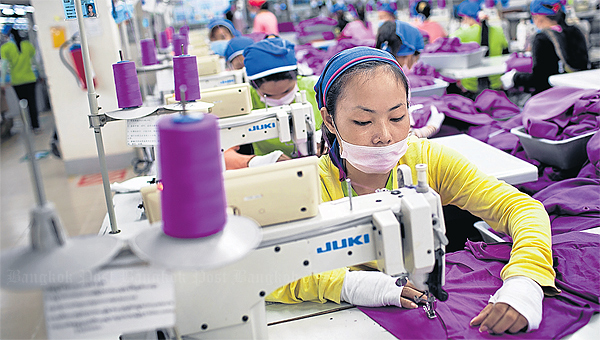 Since then, China has become increasingly prosperous with a rapidly growing middle class. Chinese manufacturers are rightfully turning their attention to their growing domestic customer base, leaving some exporters in the cold. What’s more, growing wage demands in China as well as in Southeast Asia’s light-manufacturing countries are forcing foreign manufacturers to consider other options as they search for the next low-cost destination.

The result has been a speedy realignment of the jigsaw puzzle that is Asia’s manufacturing supply chain. China has become bullish on foreign markets, investing billions of dollars in new factories and infrastructure development projects abroad. Vietnam, meanwhile, has earned the title of Asia’s new tech hub as its workforce moves away from sewing T-shirts to assembling microchips for consumer electronic goods.

Cambodia — a country where low-value garments last year made up nearly 90% of all its exports — is also overdue for an upgrade as investors have begun to develop value-added manufacturing plants, producing the likes of automotive parts, sporting equipment and small motors for various consumer products.

In fact, Cambodia has become a new base for many industrial heavy hitters such as Japanese giants seeking to reduce their dependence on China. An example is the auto parts maker Yazaki Corp, which recently christened a new $24-million wire harness factory in Koh Kong province.

“I think it is a bit of a push factor since other places like China, Thailand, Vietnam or the Philippines are now oversaturated in manufacturing, so companies are targeting Cambodia. It is a market of relative advantage,” said Chan Sophal, president of the Cambodian Economic Association.

“Cambodia is now moving up the ladder because of economic growth not only within the country, but neighbouring countries as well where many of their workers are taking jobs abroad, cutting down the supply of labour [and] driving up wages,” he said.

The global automotive components manufacturer Denso announced in January that it would invest a modest $400,000 to create a new subsidiary Denso Cambodia Co Ltd, which will produce sensor components at a new plant in the Phnom Penh Special Economic Zone (PPSEZ).

“To support the increasing production of motorcycles and automobiles in the Asean region, we’ve decided to establish a production company in Cambodia. This will enhance our production needs for customers in the regions,” Sojiro Tsuchiya, Denso’s executive vice-president for Asia and Oceania, said at the time.

“Denso remains committed to expanding its production and supply framework in line with market trends in various regions of the world, as well as to create jobs and facilitate economic development in respective regions through its operations.”

Denso is not the PPSEZ’s only new customer. Also building factories in the zone are Yamaha Motor, Laurelton Diamond, a subsidiary of the US jeweller Tiffany & Co, Malaysia’s CH Steel Wire Industries, and Japanese companies Marusan Plastic and Nikko-Kinzoku Cambodia, a maker of wax castings.

They join a laundry list of existing manufacturers that have entered Cambodia in the past two years that includes Ford Motor Co, which is now making vehicles for the Cambodian market at a $3-million assembly plant in Sihanoukville; and Minebea Co Ltd, which completed the first building of its precision motor plant in Phnom Penh in December 2011 and is well into the second phase of its $60-million development project.

“As for internal factors we can say [Cambodia has] lower labour costs than other countries, good political stability and investor-friendly government policy,” he said. “As for external factors, we can say increasing labour cost, a shortage of labour in China, Thailand and Vietnam, and specifically for the Japanese, anti-Japanese action in China.”

The Phnom Penh SEZ welcomed 16 new factories last year and with at least 18 more on the way, it is quickly reaching full capacity. Its directors are now preparing for expansion ahead of the establishment of the Asean Economic Community in 2015, said Mr Uematsu.

The Cambodian Investment Board approved $829.68 million worth of industrial projects last year, 36.35% of the $2.28 billion worth of investments approved across all sectors. The list includes a $31.6-million Chinese-owned shoe manufacturing plant, a $2.2-million kitchen and tool producing plant for the Korean company Mansin Co Ltd, and $11.3 million for an electric wiring plant.

Although not all approved projects come to fruition, the list is nonetheless a good barometer to gauge the interest of foreign investors.

“Recent surveys indicate that the Cambodian economy is diversifying. Part of that diversification is light manufacturing and we expect that trend to continue. There is also growth in the food processing industry, also critical for value-added purposes,” said Bretton Sciaroni, chairman of the International Business Chamber of Cambodia. An example of the latter is US-based Crown Cork’s $40-million aluminium can production plant in Sihanoukville, which will serve Coca Cola and Tiger Beer among other customers.

“Cambodia can graduate out of a category that has only garment manufacturing as we attract other businesses here,” he said. “This will be increasingly evident especially after a number of hydroelectric plants come online, which will help the availability, reliability and pricing of power, a key consideration for the manufacturing industry.”

Indeed, a lack of sufficient power sources makes electricity in Cambodia among the most expensive in the region, with imports necessary from Vietnam. But this is only one of many hurdles deterring some companies.

“The question is whether we can continue to offer the same wages in Cambodia, [while bearing in mind that] we have much higher costs with regard to other aspects including electricity and logistics — as well as not having the economies of scale in technology and vocational training,” said Chan Sophal.

“There are so many factors in theory that make production here less competitive and companies then pay wages to employees [accordingly], so those are the disadvantages.”

Investors also are dismayed by rampant labour rights abuses in the form of poor worker safety, contemptible wage practices and sudden layoffs for loyal Cambodian workers — all exacerbated by a vague and unenforceable rule of law in general.

The Garment Manufacturers Association in Cambodia (GMAC) and several workers’ unions have yet to come to an agreement on minimum wages, which were increased to $80 a month from $66 in March. Unionised workers who rallied on May Day in Phnom  Penh called for a wage of at least $150.

“The majority of labour disputes still revolve around the garment sector, but there is still a need in Cambodia for all workers to earn a living wage,” said David Welsh, country director of the American Center for International Labour Solidarity. With many workers across all sectors unable to cover the cost of living on their current salaries, advocacy groups continue to fight for the establishment of a national minimum wage.

“There is no excuse for the government not to establish [one],” he said. “The number on the table now in the garment sector in no way constitutes a living wage.”

Even so, Mr Welsh said there was still hope for good labour practices in Cambodia as arbitration becomes more prevalent in disputes, while foreign suppliers increasingly are taking responsibility for paying workers who were unexpectedly laid off without notice by contract manufacturers.

“There is still a huge way to go, but I think in the garment sector and in other sectors that Cambodia is going in the right direction and it will not take much to make labour laws more effective,” he said. “Here, there is a real chance for things to improve.”

Duterte retained US military deal as ‘concession’ for vaccines

Philippine President Rodrigo Duterte said US vaccine donations convinced him to keep a military deal between the two long-time allies that forms a key part of President Joe Biden’s efforts to counter Chinese influence in the region.