Seven banks signed up for B121bn in funding 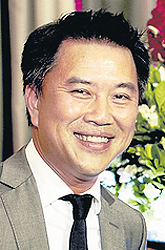 Arthid: Banks have signed an agreement

Arthid Nanthawithaya, a senior executive vice-president of Siam Commercial Bank (SCB), said the seven banks have signed a principle agreement to support CP All in its acquisition of a 64.35% stake in Makro worth 122 billion baht from the Netherlands' SHV Holdings NV.

SCB, Thailand's third-largest lender by assets, is acting as a financial adviser and the syndicated loan provider for the acquisition of Makro, a cash-and-carry store chain.

Including a mandatory tender offer to other shareholders for the remaining 35.65% stake in Makro, the deal amounts to 188.88 billion baht, making it Asia-Pacific's largest merger and acquisition transaction.

Each bank will evenly contribute to the loans, and the formal loan contract is expected to be inked in the next few days. SCB and four foreign banks _ HSBC, Standard Chartered Bank, UBS AG and Sumitomo Mitsui Banking Corporation _ agreed earlier to finance the deal.

CP All plans to take out bridging loans worth 90% of the 188.88 billion baht, while the remaining 10% will come from its cash flow. Most loans will be in US dollars.

CP All will draw down the bridging loans after the company's shareholders' meeting on June 12 approves the acquisition, Mr Arthid said.

An unnamed KTB source said each bank is expected to loan 25-30 billion baht _ an insignificant amount compared with its assets of 2.3 trillion baht.

KTB has received approval from the Bank of Thailand to expand its single lending limit ratio for the CP Group.

The regulation restricts each commercial bank from extending loans to an individual group exceeding 25% of its capital base, but banks can ask for the central bank's permission to extend beyond the limit on a case-by-case basis.

"We will revise our 2013 corporate loan growth target for the second half from the current target of 8-9%. Selective lending is needed to maintain a satisfactory margin for the business segment," the KTB source said.

SCB has also won the central bank's approval to widen its single lending limit to 60% of its capital base from 25% to accommodate the deal.