Logistics and the Lao economy: Linking up and reaching out
Business

Logistics and the Lao economy: Linking up and reaching out

Not so long ago, references to economic development in Laos typically mentioned the disadvantages of being a country that is landlocked. Wedged between dynamic, export-driven nations blessed with coastlines and harbours, Laos was viewed as fated to grow less rapidly than its neighbours. 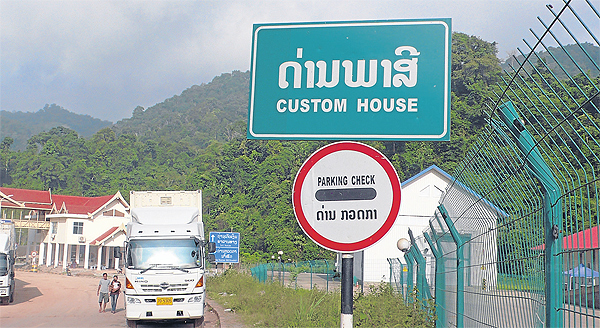 A truck laden with Thai fruit waits to cross at the Laos-China border.

But the map is changing now as the economies of Southeast Asia gear up to integrate, and as China pushes hard to develop road and rail links into the region to accelerate trade. Laos now finds itself as the pivot point between Asean’s 600 million people, with $2 trillion in GDP, and China’s population of 1.3 billion and $7-trillion economy. Laos, unless it suddenly decides to relocate, is well situated to gain.

But benefits are not guaranteed. If Laos ends up serving only as a “chute” for goods and passengers speeding between its richer neighbours, the nation could find itself lagging even further behind the region’s fast development.

Laos’s per-capita nominal GDP at $1,400, is the third-lowest among the 10 nations of Asean, outranking just Cambodia’s and Myanmar’s. Per-capita GDP in China and Thailand is more than twice the Lao level. Falling further behind would disadvantage not only the people of Laos, but also hurt the economic and geopolitical self-interests of neighbouring countries that would benefit from seeing regional economies grow in unison.

Already one Lao industry, trucking, has seen a loss in opportunity due to new regulations and procedures that will speed transshipment and customs clearance. A 2011 memorandum of understanding between Thailand and China allows pre-inspected fruits to be transported from Chiang Khong district in Thailand via Laos uninterruptedly to the border crossing in Mohan, in China’s Yunnan Province, without being reloaded onto Lao trucks.

The agreement has helped boost overland shipments of fruit from Thailand to China to a 45% annual growth rate, up from an annual average of 20% before, but Lao truckers don’t benefit. This case underscores the importance for Laos of building up its own production capacities.

Fortunately, Laos has plenty to offer not only as a stepping-stone, but also as a keystone in regional commerce and supply chains, as well as in tourism.

Abundant natural resources and energy as well as a growing, young populace mean that Lao and international investors can profit from factories, hospitality businesses and customers within Laos, while helping fuel the local economy.

Wages have been climbing fast in China and Southeast Asia, but stand at only $86 per month in Laos. Manufacturers of products such as processed food, wood furniture and apparel can hire Laotians to make goods that will soon be easier to transport to neighbouring countries thanks to new transport infrastructure now coming online, or being planned, such as high-speed trains.

Laos has been stepping up business incentives, giving equal rights to Lao and foreign investors, allowing foreigners to buy real estate, and granting corporate income tax exemptions of up to 10 years in selected sectors. The government wants to increase the role of investment as an economic driver, raising it from its current level of 16% of GDP to 32%. Officials expect 56% of that investment will come from private-sector foreign sources.

Special economic zones are another attraction, sited near routes connecting Thailand to China as well as Thailand to Vietnam. The SEZs are hubs for international supply chains. Vita Park Special Economic Zone is one important example, located 21 kilometres from Vientiane, near Route 13, the big highway linking the major cities and airports in Laos reaching to southern China.

An investor could, for instance, establish a food processing plant in Vita Park in order to import raw materials from Thailand and then truck finished products to distributors in southern China. Such a project would gain not only from Lao labour costs but would be exempt from import and export duties, while enjoying a corporate tax holiday for its first 10 years of profits, with a tax rate of just 8% afterward.

The Savan-Seno Special Economic Zone, in Laos’s second-largest city of Savannakhet, services the East-West Economic Corridor that is being developed to facilitate land transport between Thailand and Vietnam. Savan-Seno SEZ is near the Second Thai-Lao friendship bridge that joins Mukdahan and Savannakhet.

The SEZ has overland connections to countries throughout Southeast Asia and to the deep-sea port at Laem Chabang in Thailand. The zone now hosts 32 companies with a total investment valued at $90 million or 2.7 billion baht. These plants make products such as electrical wire, processed foods, wood products, textiles, shoes, and handbags. Now Toyota is planning to locate there to make interior components including vehicle seat covers to supply assembly plants in Thailand.

Logistics will soon get a boost from a new container yard being built at Vientiane’s Thanaleng Railway Station, known in Lao as Ban Dong Phosy. Due for completion in 2014, the depot will be a hub for handling goods bound for distribution in Laos and China. The station will be linked to Thailand’s Nong Khai province via a 3.5-kilometre train route crossing the Mekong River at the First Thai-Lao friendship bridge.

The route is not yet being used for freight, but probably will be within one or two years, linking into Thai government efforts to promote rail transport in order to reduce logistics costs that are now inflated by heavy reliance on trucking. Thanaleng’s new container yard will serve as an important storage and transfer hub for cargo going to China, generating growth in Vientiane of logistics businesses like transport companies, freight forwarders, and customs brokers.

As for tourism, Laos already has world-class credentials: affordability, friendly people, mountains, forests, and two Unesco World Heritage sites: Luang Prabang town and the Vat Phou temple complex in Champasak Province. Tourism income grew by 17% per year from 2005 to 2012, and is the second largest part of the economy after agriculture.

The European Council on Tourism and Trade chose Laos for its World’s Best Tourist Destination Award this year. Data show that most international visitors to the Indochina region now include Laos in their itineraries.

For now, most tourists travel to Laos by road. Thais comprise 60% of all tourists to Laos, crossing from Mukdahan to Savannakhet. Most Chinese tourists cross from Boten to Luang Namtha, capital of the eponymous Lao province.

Data show that more European tourists choose to enter Laos via the bridge at Vientiane, from Nong Khai in Thailand, than through Vientiane International Airport. All of this coming and going will get a big boost if and when high-speed trains finally connect southern China to Bangkok via Luang Prabang, Vientiane and Nong Khai.

Fast trains would mean a commute of only three hours between the Lao and Thai capitals, good news for travel agents, boutique hotels, backpacker hostels, Franco-Lao bistros, herbal spas, handicrafts galleries and all the rest of the tourism scene.

And of course Lao nationals themselves are a promising market for local and international businesses. During the past five years, the economy grew on an average of 8% per year, outpacing Asean’s average of 6%. The main growth factor has been foreign investment in large infrastructure projects such as hydropower plants and mines. That has helped per capita incomes rise by more than 6% per year, spurring the market for consumer goods.

The population is just 7 million, but Lao people are younger on average than their neighbours in Thailand, which gives companies a better chance to win customers among individuals not yet set in their spending patterns and loyalties. That should attract foreign investment, as more and more Laotians get linked in to the region’s rising prosperity. As the Chinese say, it pays to have good connections.