Singaporean company TWG Tea is introducing discerning Thais to the nuances of the world's most consumed beverage after water.

Thailand's tea-drinking culture remains strong, with consumers tempted by many tea brands from around the world.

TWG Tea from Singapore is also tapping vast opportunities to build its brand among Thais after opening two TWG Tea Salon & Boutique outlets with good feedback from locals at The Emporium and Siam Paragon shopping centres in Bangkok. 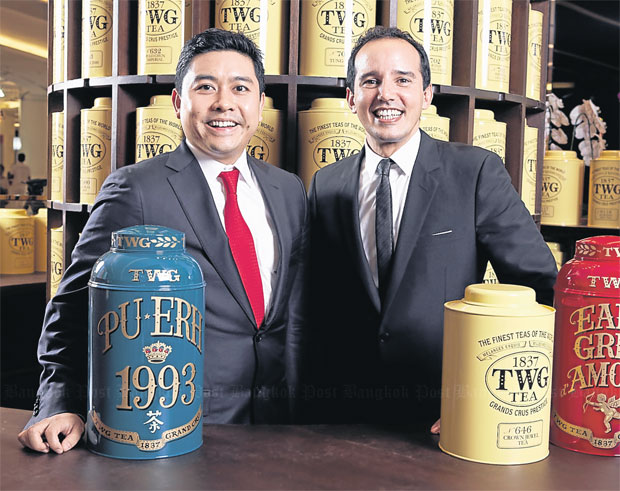 The first outlet at The Emporium, which opened in August 2012, sold 1 tonne of tea leaves and served more than 150,000 cups of tea last year.

Early this month, the second shop opened in Siam Paragon. The outlet is expected to sell more than 150,000 cups of tea in the second half of this year, with prices starting from 280 baht a cup.

"The combined investment for the three TWG Tea outlets is 300 million baht, and we will reinvest about 70% of benefits in the first year to expand the TWG Tea business in Thailand in the years to come," Mr Yuthachai said.

Italthai aims to triple its tea revenue from 2013-14. Retail sales should represent about 40% of the total, with the remainder from sales in tea salons.

Mr Yuthachai said the company strongly believes TWG will revolutionise the tea industry in Thailand and provide a new dining and retail experience that has been eagerly welcomed by Thais.

Thai customers are thirsty for gourmet teas. They are very attentive to the quality of leaves and the origin of tea and want to know more about the differences between mass market teas and gourmet variants.

"Word of mouth from our loyal customers has been the best marketing strategy for TWG in Thailand," Mr Yuthachai said.

Although coffee is very popular in Thailand, Italthai is confident in its tea business, as tea is the most consumed beverage after water in the world, with more than 15,000 cups drunk every second.

Some cultures even consume tea instead of water when they are thirsty.

Tea has shaped the history of the world, causing wars between nations and consumed by emperors, royalty and aristocrats. It changed the face of politics, strengthened warriors and was even a prelude to courtship.

"Tea is all about taking your time, and as time is a luxury, tea has metamorphosed into a luxury of its own accord. Coffee will never be related to luxury, and this is the biggest difference between the two," Mr Yuthachai said.

The Wellness Tea Group or TWG Tea was established in Singapore in 2007. Its Salon & Boutique concept showcases its variety of teas from 800 single-estate harvests and blends.

It has a tea preparation area and sells loose and packaged teas. TWG Tea operates 22 outlets in nine countries.

Taha Bouqdib, the president and co-founder of TWG Tea, said it plans to see TWG Salon & Boutique shops in all big cities in the world by 2018. It also hopes TWG will become a tea institution in Asia.

After TWG Tea is strongly established in Asia, it will seriously expand into Europe and the US. It will soon introduce the brand in China, which is expected to become a big market for the company in the next 3-5 years.

As a luxury tea, TWG Tea will educate Chinese and offer them the finest teas from around the world.

The value of the global luxury tea market is more than US$5 billion and growing. This trend, known as the "premiumisation" of tea, will continue to develop significantly across Asia, where there is an increasing demand for luxury goods in general.