Thailand's biggest eruption of political unrest under the current government has increased economic risks, threatening to crimp a rebound from recession as protests damp local consumption and investment while weakening the currency. 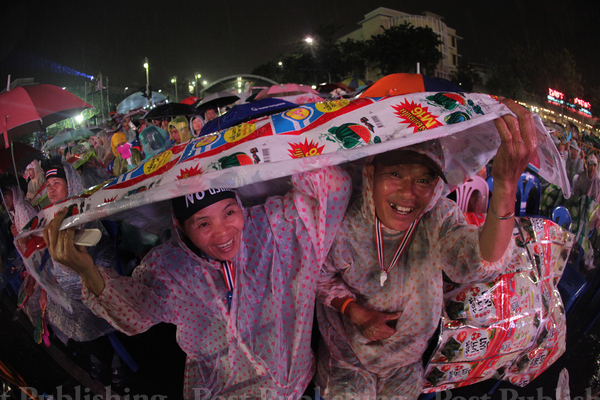 Protesters converged at Democracy Monument despite the rain on Thursday night to join the Democrat Party-led campaign against the amnesty bill and Prime Minister Yingluck Shinawatra's government. (Photo by Thiti Wannamontha)

Gross domestic product will rise an average 3.6% this year, according to the median estimate in a Bloomberg survey of 26 economists, lower than a forecast of 4% in August. GDP probably expanded last quarter from the previous three months after contracting in the first half of the year, a separate survey showed ahead of a report due Nov 18.

Prime Minister Yingluck Shinawatra has struggled to contain weeks of anti-government protests against a bill that would have provided amnesty for political offences stretching back to 2004, before and after the 2006 coup, allowing her self-exiled brother Thaksin's return.

Concern that the House of Representatives will later resurrect the bill after it was rejected this week by the Senate has hurt investor confidence.

"The current political environment is a headwind to an already weak growth outlook,'' said Euben Paracuelles, a Singapore-based economist at Nomura Holdings Inc. "This will not only hurt sentiment but will also have a direct negative impact on real economic activity. The longer this persists, the higher the downside risks to growth.''

The baht is among the worst performers in the last three months of 11 Asian currencies tracked by Bloomberg. The currency will fall to 32 per dollar by Dec 31, according to the ANZ Banking Group, the most accurate forecaster over the last four quarters.

Anti-government protests in Thailand in 2010 led to clashes that left more than 90 people dead. Prolonged unrest now will harm tourism and private investment and could shave 0.5 percentage points from the nations GDP in 2014, according to a BNP Paribas SA research note on Nov 4.

Southeast Asia's second-biggest economy grew 2.8% in the second quarter from a year earlier after an expansion of 5.4% in the preceding period. Third-quarter growth was probably 3% from a year earlier and 1.5% from three months earlier, according to two Bloomberg surveys.

Overseas investors have pulled about US$1.6 billion from Thai stocks and bonds since the beginning of the month. Wells Fargos Advantage International Bond Fund said on Monday it has sold its holding of Thai government bonds in recent months because of concerns about valuations and political tensions.

"The amnesty bill is certainly something to keep an eye on,'' said Lauren van Biljon, a London-based analyst for the fund. Emerging markets are having to fight harder for investor inflows given the more difficult global environment, so anything that raises internal political risk could create problems.

The central bank has held the benchmark interest rate at 2.5% in the last three meetings and is due to meet next on Nov 27, when it will probably leave the rate unchanged, according to a Bloomberg survey. The central bank last month cut its 2013 growth estimate to 3.7% from a July projection of 4.2%. It said exports may increase 1 percent, down from an earlier forecast of 4%.

Ms Yingluck's government raised minimum wages last year and introduced a program in 2011 to buy rice at above-market prices to boost rural incomes. Thailand's skillful macroeconomic management, strong fundamentals, high international reserves, and moderate public debt levels have blunted the impact of recent shocks and are underpinning a recovery, the Executive Board of the International Monetary Fund said on Tuesday.

"Thailand is planning to tap the dollar bond market for the first time since 2006 next year, targeting $1 billion to $1.5 billion of issuance,'' said Chularat Suteethorn, director-general of the Public Debt Management Office. The money will be used to partly finance the 2 trillion baht of infrastructure projects that have been delayed.

"The worst is probably over for the Thai economy, and its on track for a gradual recovery from the second half,'' said Tohru Nishihama, an economist covering emerging markets at Dai-ichi Life Research Institute Inc in Tokyo.

"External demand is recovering, which should contribute to the recovery story. We need to see how the political situation develops.''