As Laos slowly engages with the world economy, investors are looking for office space in the capital, where a few ambitious developments are planned.

The sight of new buildings under construction in Southeast Asian capital cities is considered routine, but for Vientiane it is an exciting trend, showing the movement of trade and economic development in Laos. 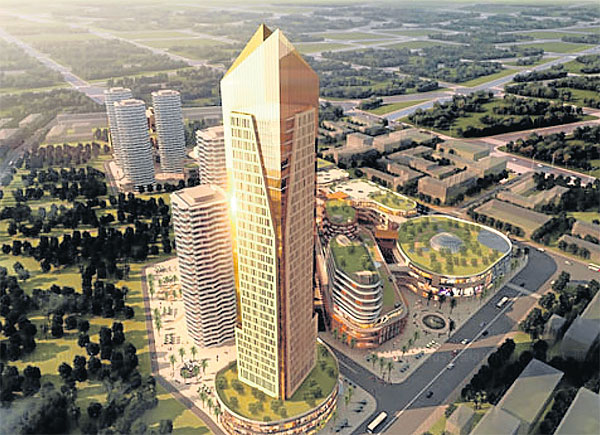 At 150 metres, the Sky Office Building will be the tallest building in Laos and the focal point of the The World Trade Centre in Vientiane.

Given the fact that Laos is not a manufacturing- and services-based country, it is no surprise that its capital city is not yet full of blocks of office buildings like Singapore, Bangkok, Manila and Jakarta. But as a new member of the World Trade Organisation (WTO) since February this year, the Communist-run country is seeking greater engagement with the global economy.

The most visible evidence of the change is the effort the government is making to attract investors by creating special economic zones (SEZ), starting with the Savan-Seno SEZ located in the south of the country.

The country’s gross domestic product (GDP) has been growing at an annual average of 8% for five consecutive years, with a similar rate forecast this year.

So far, the main foreign investors in Laos are its immediate neighbours. Vietnamese investments as of the end of 2012 totalled US$4.77 billion, followed by China with $3.43 billion and Thailand at $2.85 billion. As they build up their business presence, they will need more factories and other facilities near the sites of their main activities in agro-industry, resources and manufacturing. In the capital, meanwhile, they will need offices.

Both small and large-scale office buildings are now being built in Vientiane. Most are clustered in the centre of the capital near Avenue Lane Xang, the major thoroughfare leading to Pratuxay, the landmark victory gate modelled on the Arc de Triomphe in Paris.

The construction of office buildings in Vientiane was not very active until 2010, when the supply of space doubled with the completion of the Kolao Capital Tower, said Surachet Kongcheep, associate director of research with the property services firm Colliers International in Bangkok.

Since then, he said, the supply of office space has continued to rise dramatically by local standards. 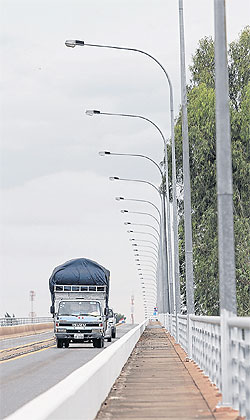 Kolao is a joint venture between a local company and South Korean investors. It started out assembling and selling cars in Vientiane and now has diversified to other businesses such as finance by operating Indochina Bank, and electronic products distribution. In 2010, it opened its two office buildings with car park space to meet the needs of its own businesses and the rising demand for rental space. Most of its tenants are South Korean companies doing business in Laos.

Laos had roughly 2,000 square metres of office space between 1994 and 2000 with no new supply added to the market. There was some new supply in 2001 but the market remained quiet until 2006, according to the Vientiane Property Market Report published by Colliers in July this year.

Total office space in Vientiane, the major area for office buildings now stands at almost 49,700 sq m. Around 79% of the supply was added to the market between 2010 and 2012. The average size of office buildings has also become bigger. The new buildings constructed from 2010-12 have more than 5,200 sq m per building on average, compared with 2,550 sq m for the older ones.

Mr Surachet said offices for rent in Vientiane in the past were just houses that had been adapted for business use. When more investors, particularly those in the power and banking sectors, began coming to the country, the existing supply of offices was no longer enough. Lack of parking was also a serious limitation for home offices, so new buildings with parking structures were needed.

The average occupancy rate of office space in Vientiane is around 82% currently, up from 77% a year ago. Most of the tenants are large multinational businesses operating in Laos.

Avenue Lane Xang now is a popular area for banks, with both local and international financial institutions occupying buildings on both sides. Both old and new buildings still coexist along the road, and small office buildings with four to five storeys are under construction here and there.

The boom in this office construction activity and investment has attracted keen interest from people who live in the area and have land that could be profitably used.

One local resident who asked for anonymity said many foreign investors had approached him about purchasing his house in order to demolish it and build an office. But he decided not to sell although the offers are increasing every year.

His house is located on Avenue Lane Xang. On the right side stands the ANZ Bank office and on the left is another small office building. The offers for his property have skyrocketed from US$1 million to $9 million, but he insists that he does not want to take the money and move out. He also believes the plot of the land is too small for any major construction.

While sitting on potential millions, this longtime neighbourhood resident carries on in a very modest fashion, traditional breakfast such as pan-fried omelettes and coffee and tea in front of his house. His regular customers sit on the very small seats and chat about everything from their daily affairs to the country’s political situation.

While most of the new office buildings being constructed in Vientiane are on a small scale, a few large standouts include the New World building and the World Trade Centre, said Mr Surachet. The New World is the smaller of the two, with an estimated investment of $600 million, and will have commercial, office and residential areas.

The World Trade Centre is more ambitious and includes the Gold Office Building, to be developed by Lao International Development, as the tallest office building in the country. Located around 1.5 kilometres from the Avenue Lane Xang, the building is set to be 150 metres high. It will occupy a compound that includes a shopping complex, residential apartments and a five-star hotel when it is completed.

“The supply of new office buildings in Vientiane may not grow at the speed that we saw between 2010 and 2012 as the supply is enough to serve the new demand,” said Mr Surachet.

“How quickly the new buildings can be added to the market depends on the construction of the World Trade Centre. It is a very big project for Laos, comprising an office building, hotel, shopping mall and apartments. So, it will not be easy to complete it that quickly.”