Panicked by rumours of rice scheme lending, GSB customers are pulling out their money in droves.

Customers are stampeding to yank their deposits out of banks perceived as having extended loans to fund the cash-strapped rice pledging scheme. 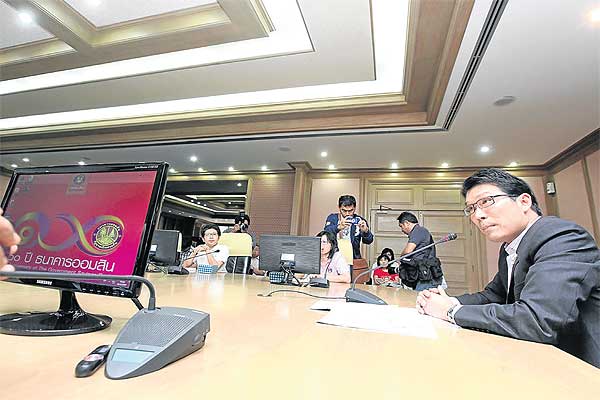 The deposit flight from the Government Savings Bank (GSB) is not out of fear for its financial stability but rather is a response to speculation the state-run bank is involved in lending to the troubled rice subsidy of the Yingluck Shinawatra government.

Spikes in money withdrawal have also been seen at the Bank for Agriculture and Agricultural Cooperatives (BAAC) and Krungthai Bank (KTB), although of a much smaller magnitude.

“Such actions are deemed to help the government avoid legal restrictions,” said Lalida Veeravithayanant, a doctor at a local hospital, referring to the alleged loans.

“It’s not solving the right problem, and this could lead to a messier problem. Social penalty is the duty of all people. Social sanctions can work at a faster pace than legal action.”

She withdrew 800,000 baht from her two accounts at KTB a day after she learned the country’s biggest state-owned bank had approved short-term loans to existing customers who are rice traders and exporters taking part in government rice auctions.

Dr Lalida said it was a surprise when she requested a cash withdrawal at KTB’s branch in the Zuellig House building on Silom Road and was denied. The excuse given was that there were insufficient funds at the time due to many depositors withdrawing cash.

She also closed her savings account with the GSB after withdrawing 100,000 baht and redeeming savings certificates to the tune of 1 million baht after local media reported the bank had extended billions of baht in loans to the BAAC through interbank lending.

Interbank borrowing is a channel that allows banks experiencing a glut of savings to lend to banks that are falling short of liquidity. But both the GSB and the BAAC have surplus liquidity, said Dr Lalida, adding that such borrowing is considered a hidden deal.

“The right way to solve the rice pledging problem is by selling rice to pay off farmers. The current method will create a distortion of the problem,” she said.

GSB president Worawit Chailimpamontri insisted during urgent press conferences yesterday and Sunday that the GSB has extended 5 billion baht to the BAAC as part of its existing 20-billion-baht credit line to the BAAC in the interbank market, and that the funds were not meant to fund the rice pledging scheme.

Even so, the lending has spurred rumours that it would be used to pay the government’s overdue debt to rice farmers.

The rice pledging scheme, a key plank of the Pheu Thai Party’s winning platform in 2011, is proving to be the Achilles heel of Yingluck Shinawatra’s caretaker government.

Problems with the scheme, which offered farmers a price 40-50% higher than market prices, loomed shortly after it began in October 2011. The Yingluck government hoarded a large supply in state warehouses, wagering that global rice prices would rise.

The attempt to manipulate the market backfired as rice flooded the global market. The bad bet has left Thailand with a record stockpile, and the country has relinquished its crown as top rice exporter to India and Vietnam.

The scheme is tarnishing the caretaker government, and things worsened when the National Anti-Corruption Commission last month announced a probe of Ms Yingluck’s role in the scheme after bringing formal corruption charges against two of her cabinet ministers.

With the huge stockpile and the government’s vow to buy every single grain, the rice subsidy is estimated to have caused losses north of 400 billion baht for the first two harvest seasons, quickly exhausting its 500-billion-baht outstanding budget. In response, the government sought 180 billion baht from the BAAC to make advance payments to farmers.

Due to the cash crunch, the Yingluck government delayed paying 130 billion baht to 1.4 million farmers — a core constituency of Pheu Thai. Ms Yingluck’s decision to dissolve the House last Dec 9 has obstructed the caretaker government’s ability to borrow more to pay farmers, as such borrowing could be ruled unconstitutional and leave banks open to charges of wrongdoing.

An unnamed worker at a private company said she planned to redeem savings certificates issued by the GSB worth 17,000 baht even though she must sell them back at a discount because she bought them less than three months ago.

“Being a state-owned bank, it must have responsibility,” she said. “The bank cannot say it does not know what the BAAC will use the lending for. If so, how can the bank extend loans without any risk evaluation, and how can people trust the bank?”

Even though the irregular withdrawals from the GSB stemmed from depositors’ discontent over lending to the BAAC, fears from other depositors that they may not get their money back in full and immediately as requested could escalate — and the bank could be in hot water at that point.

“I withdrew 20,000 baht from my savings account at the GSB and redeemed another 180,000 baht in savings certificates, as I started to feel concerned that my money may become only paper like the farmers’ pledging invoices,” said another employee of an international company.