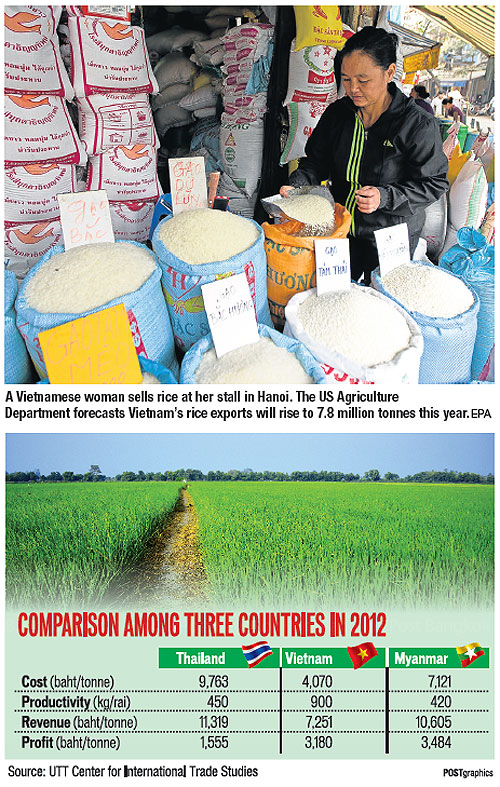 “This comes despite the government setting rice-buying prices higher than market rates through its pledging scheme over the past three years,’’ said Aat Pisanwanich, dean of the University of the Thai Chamber of Commerce (UTCC) economics faculty and director of its Center for International Trade Studies.

Vietnam harvests three rice crops a year, while Thailand and Myanmar have two.

“The new government should think twice about the cost-intensive rice pledging scheme. and it should instead shift to help farmers through subsidies to reduce production costs by about 40% in an effort to raise their income,’’ he said.

“A farmers' assistance fund financed by the government should be also set up to help small farmers who control about 20 rai per household. This sort of practice is viable under the 'green box', a category of domestic support that is believed not to distort trade under World Trade Organization rules.”

This subsidy structure will help farmers to raise 98,413 baht in income per year per household from their two crops.

“This proposal, if installed by the new government, is expected to satisfy farmers, as they could earn 10,000 baht per tonne from their paddy sales,’’ said Mr Aat.

He said operation costs would be much lower than the expenses of the rice-pledging scheme, which squanders more than 300 billion baht a year.

Meanwhile, zoning measures and productivity enhancement should move ahead, while farmers should also be provided with the latest information about the ups and downs of global rice prices to give them a better understanding, said Mr Aat.

In a case where a government led by the Pheu Thai Party is re-elected, the study proposes that pledging prices be lowered and payments be offered in accordance with the rice’s quality.

“Thai rice has been on a downtrend over the last three years after the installation of the government’s rice-pledging scheme,’’ Mr Aat said.

"Above-market prices set by the government have distorted the rice market's structure. New rice producers in Asean such as Myanmar and Cambodia are growing stronger, while rice importers such as those in the Philippines, Malaysia and India have gradually cut their imports and promoted their rice production at home.

"Those buyers have also shifted to buy grains with lower prices in place of high-priced Thai rice.”

The rice-pledging scheme, the Pheu Thai-led government’s major policy that helped Yingluck Shinawatra to sweep to power in the 2011 general election, has been criticised by academics and the opposition Democrat Party for hefty losses, as its pledging price is set at 40-50% higher than market prices. It has also been the subject of corruption allegations.

In a related development, Distat Hotrakitya, deputy secretary-general of the Council of State, informed the Senate Committee on Monetary, Finance, Banking and Financial Institutions that the Finance Ministry under the caretaker government can provide a guarantee to the borrowing plan to pay off rice farmers, as such action was endorsed by the cabinet’s recent resolution and is thus not considered to be adding liabilities to a future new government.

However, he pointed out that it is the duty of the Election Commission (EC) to consider whether the borrowing will breach the constitution's Section 181 (4) prohibiting the caretaker government from using state agencies and their human resources for doing anything that could influence voting.

An EC lawyer last week told the committee that payments by the Bank for Agriculture and Agricultural Cooperatives (BAAC) to farmers under the rice subsidy scheme did not fall under the scope of Section 181 (4).

The caretaker government is struggling to find funds for the scheme after it failed again on Monday to pressure the BAAC into using its liquidity to pay rice farmers what is owed them.