VW plans to set up factory in Thailand
Business

VW plans to set up factory in Thailand

Volkswagen AG, Europe’s largest automaker, has applied to set up its first car plant in Thailand to help narrow the gap with Toyota Motor Corp in Southeast Asia, people familiar with the matter said. 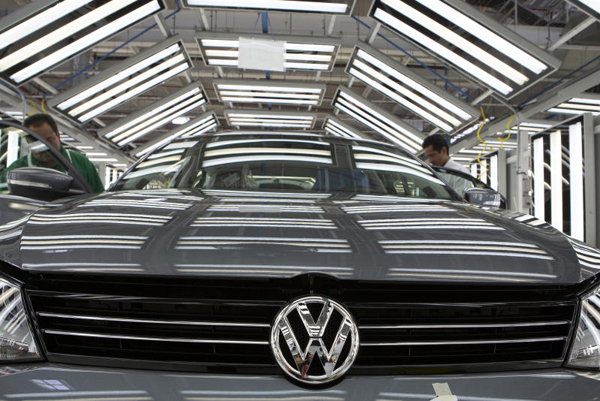 Employees do a quality inspection on a Volkswagen AG Jetta vehicle at the company's assembly plant in Puebla, Mexico. The Germany manufacturer plans to set up its factory in Thailand. (Bloomberg photo)

The Wolfsburg, Germany-based manufacturer is seeking to participate in a government programme offering tax exemptions for automakers investing at least 6.5 billion baht (US$200 million) in local manufacturing, said the people, who asked not to be identified because a final decision has not been made.

Annual production must reach at least 100,000 cars in the fourth year after starting operations, and manufacturing must begin by 2019, in order to receive the incentives. The programme from the Industry Ministry includes vehicle assembly, components and engine production. Carmakers had until March 31 to apply, according to a ministry statement from last October.

“VW has always been one of the manufacturers trying to position itself globally,” Juergen Pieper, a Frankfurt-based analyst at Bankhaus Metzler, said by phone. “Current sales volumes in Southeast Asia are much smaller than in China or the US,but it’s one of the regions where Japanese carmakers are significantly ahead of VW, so there’s room for growth.”

The carmaker anticipates industrywide sales will increase on average 4.5% annually through 2018 in the region comprising Indonesia, Thailand, Malaysia, the Philippines and some smaller countries in the area. VW started assembling Passat sedans in Malaysia with local automaker DRB-Hicom Bhd in 2012.

Volkswagen hasn’t made a final decision yet on producing vehicles in Thailand as the exact terms and conditions may still change, the people said. VW declined to comment on any plans it has for the country.

Chief Executive Officer Martin Winterkorn said last month that the automaker may sell more than 10 million vehicles worldwide in 2014, four years earlier than initially planned, as VW seeks to overtake Toyota as the industry leader by 2018.

VW delivered 9.73 million vehicles in 2013 as a boost in Chinese demand helped it surpass General Motors to become the world’s second-biggest carmaker. VW, which also owns the Audi and Porsche premium marques and Seat and Skoda mass-market nameplates, will introduce more than 100 models through 2015. VW outlined plans in November to invest 84.2 billion euros through 2018 to build new models and expand production.