For tourists and expats in Thailand, being stopped and fined for not carrying a passport can be highly irritating. Some even question whether such a requirement exists, or whether they are simply being shaken down by police for some easy cash. 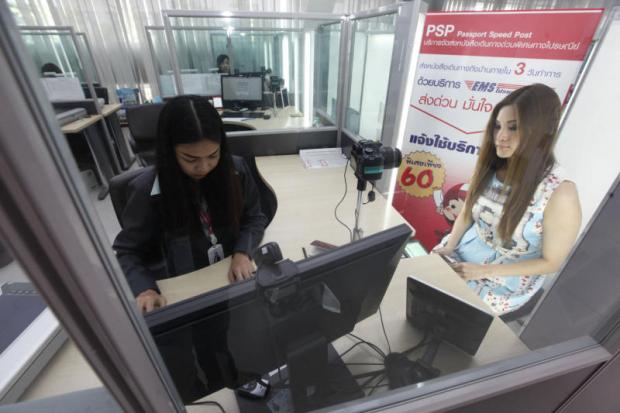 A sign in the passport division of the Consular Affairs Department encourages Thai nationals to take advantage of Passport Speed Post. Offered in conjunction with Thailand Post, the service delivers passports to applicants within three days for a fee of 60 baht.

Well, you are not alone. Thailand along with many other countries in Asia requires you to carry your passport everywhere you travel, and photocopies are not acceptable, although very few people carry their travel documents all the time.

After getting their passports stamped by Immigration, most tourists check into a hotel and lock up their passports and valuables in a safety deposit box, where they remain for the duration of their stay, unless authorities ask to see them.

However, since the May 22 military coup, police in Thailand have rediscovered the existence of all kinds of laws, ranging from parking offences to encroaching on public land, which had been widely ignored in the past. It was only a matter of time before passports came to their attention.

As with nearly everything in Thailand, however, confusion persists about how serious authorities intend to be about enforcing the law.

Thaivisa.com, a popular portal for expats and travellers, put the question directly to Pol Col Thanasak Vongluekiat, superintendent of the Prachuap Khiri Khan and Phetchaburi Immigration office in Hua Hin.

He said that by law, all tourists and expats nationwide are required to carry their original passports with them at all times. There is no exception. Failure to carry your original passport may result in a 2,000-baht fine. A photocopy, stamped or not, or a driver's licence is not an acceptable substitute.

"The reason behind this is that Immigration needs to keep track of overstayers and foreign criminals who may be staying illegally in the country," Thaivisa quoted Pol Col Thanasak as saying.

Pol Col Voravat Amornvivat told Thaivisa that he wanted to reassure the expat community. "Making all foreigners in Thailand carry their original passports with them would be very difficult," he said. "It's about being reasonable and using common sense."

He said tourists would not have to carry their original passports and expats could use a Thai driving licence if they have one, or a photocopy of their passport as a form of identification.

It may be frustrating to be stopped by the police for a seemingly minor offence. Yet the law is not unique to Thailand.

In Indonesia, foreigners are required to carry their passports at all times or risk being detained until proper identification can be produced, according to the legal affairs section of the Indonesian Embassy in Bangkok.

In other countries such as the Philippines, there is no written law but it is advisable to carry your passport, though a photocopy or other identification may be accepted.

Similarly, Singapore has no law but authorities point out that in instances of emergencies or accidents, foreigners are required to present their passports. Most officials strongly urge foreigners to simply carry them as a matter of course.

Local laws in Thailand requires Thai citizens to carry their national identification card, so foreigners in this country are expected to carry identification in the form of a valid passport, explains Supasate Chokchai, the deputy commander of the Tourist Police Division.

A national ID card from another country or a photocopy of a passport would not be sufficient. Only original passports are accepted as international identification as it determines one's name, nationality, and the visa under which one entered the country, he added.

Globalisation and the increasing integration of Asean have prompted Thailand to exempt some foreigners from having to obtain a visa, while citizens of certain countries can apply for a visa on arrival.

Although this promotes tourism, the number of illegal immigrants and immigrants who overstay their visas in Thailand is huge — as high as 5 million by some estimates.

To prevent foreigners from overstaying their permitted period, they may face random inspections by police, who will ask them to present a passport and evidence of their legal status in the country. The fine for an overstay is 500 baht per day, up to a maximum of 20,000 baht.

Many foreigners work illegally in Thailand, armed only with tourist visas and never obtaining the proper non-immigrant B visas and work permits. They are steady customers of a thriving "visa run" business, hiring vans to travel to border towns such as Poi Pet, Cambodia to exit the country and re-enter with a new visa stamp.

Immigration officials have now declared that after three such extensions, a person will be asked for details about his or her intentions for staying in Thailand. Those who desire to prolong their stay must contact the Immigration Bureau which is the only authority that issues visa extensions. Visa extension service centres are illegal.

In addition, random inspections are conducted to check on criminals who are travelling incognito in the country. Mr Supasate says that police will compare a passport number with a database to determine if it matches any that international police have flagged as false.

However, inspections are at the discretion of the police, Mr Supasate added. A tourist spending time at the beach, exercising, or mountain climbing in Chiang Mai is unlikely be approached for a passport check. In the case of tourists who have their passports locked away, officers may accompany them to retrieve the documents.

If a foreigner is unable to produce his passport upon inspection, he will have to undergo a police investigation to verify his nationality. The foreigner will then be detained until it has been proved that he entered the country legally. If the foreigner has lost his passport or had it stolen, he must immediately report it to the embassy and have a new one issued.

"The benefits of carrying your passport with you outweigh the costs," Mr Supasate said.

In any case, he encourages tourists to carry their original passports with them, not only in case of a police check. Such identification is often needed when making purchases with a credit card, or for insurance purposes in the event of an accident. As well, Thai banks require passports, not photocopies, for a variety of financial transactions.